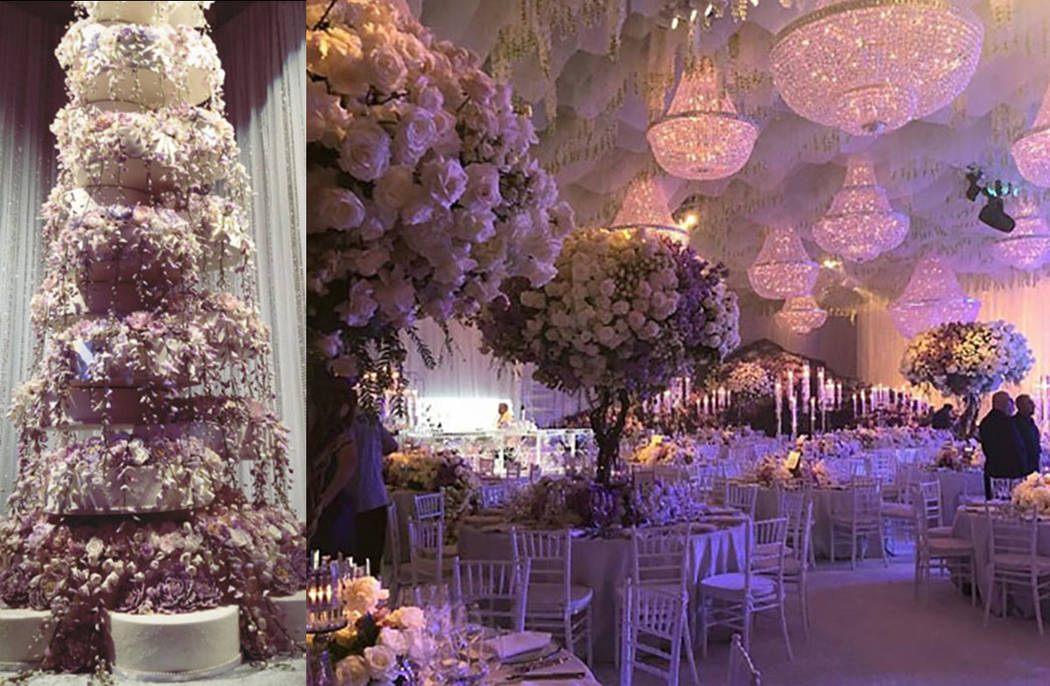 The wedding cake, left, and a lavish floral display are seen at the Kelley Fertitta-Tyler Nemiro wedding on Saturday, Sept. 1, 2018 at Red Rock Resort in Las Vegas. (@Alexandra Lourdes/Instagram and @michael_marksgarden Instagram))

Marshmello is shown performing at the after-party of the Kelley Fertitta-Tyler Nemiro wedding on Saturday, Sept. 1, 2018 at Red Rock Resort in Las Vegas (@lin_smith_jerome Instagram)

Kelley and Tyler Nemiro are shown during their first dance as a married couple on Saturday, Sept. 1, 2018 at Red Rock Resort in Las Vegas (@lin_smith_jerome Instagram)

The wedding cake for the Kelley Fertitta-Tyler Nemiro wedding is shown on Saturday, Sept. 1, 2018 at Red Rock Resort in Las Vegas (@Alexandra Lourdes/Instagram)

Kelley and Tyler Nemiro are shown during their wedding spectacular on Saturday, Sept. 1, 2018 at Red Rock Resort in Las Vegas (@dmdraper/ Instagram) 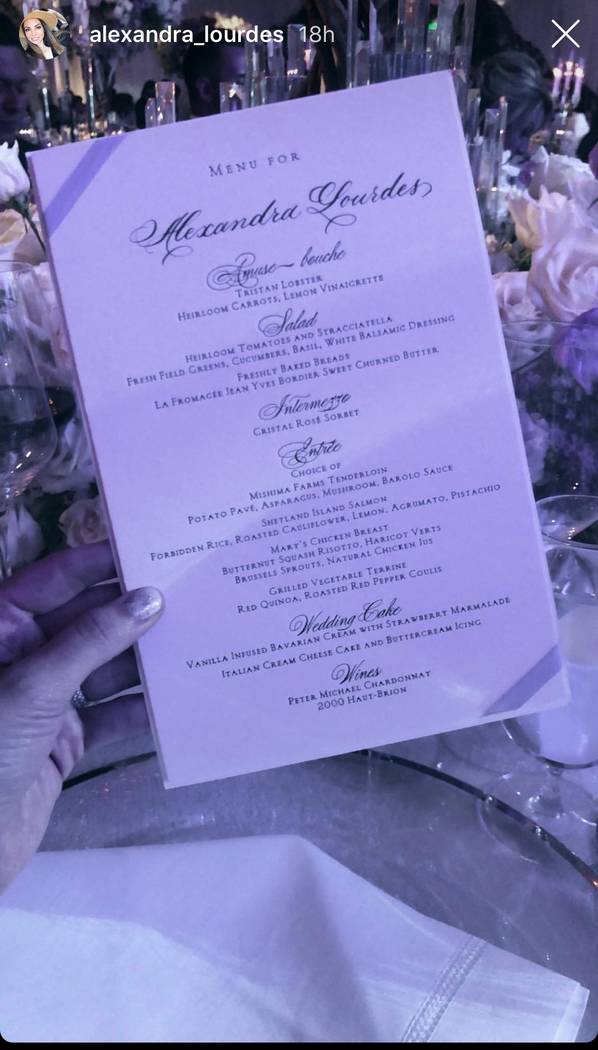 The dinner menu for the Kelley Fertitta-Tyler Nemiro wedding is shown on Saturday, Sept. 1, 2018 at Red Rock Resort in Las Vegas. (@Alexandra_Lourdes Instagram)

Bruno Mars sang of 24-karat magic in the air. It was in the air, and everywhere, Saturday night for the wedding of Kelley Fertitta and Tyler Nemiro at Red Rock Resort Convention Center.

And we do mean the entire convention center. You could not get near that place, as security was stationed at the roped-entrance to the escalators — which were nonetheless decorated beautifully with a long row of flowers.

The event was unofficially dubbed Vegas’ “royal wedding.” Fertitta is a daughter of Station Casinos Inc. CEO Frank Fertitta III and niece of his brother and company co-owner Lorenzo Fertitta. Nemiro’s LinkedIn page lists him as an executive with Shopify Plus.

Ostentatious even by Las Vegas standards, or the standards of nuptial celebrations anywhere ever, the ceremony starred Mr. Mars — who performed an hourlong set at the event’s after-party — Seal, and DJ Marshmello.

Also deserving of marquee treatment was a floral display (or, more like a City of Flowers, in lavender, purple and white) from Los Angeles-based Mark’s Garden and designed chiefly by Mindy Weiss.

And the cake stood 20 to 30 feet tall — so tall even LeBron James could not have dunked over it — was created by “sugar artist” Ana Parzych of Ana Parzych Cakes in Greenwich, Connecticut. This delicacy was made of vanilla infused Bavarian cream with strawberry marmalade, Italian cream cheese cake and butter-cream icing.

Preliminary estimates of $25 million for an event of between 400-450 invited guests might actually be conservative. The floral display alone was said to be at least $1 million and possibly as high as $2 million (messages to the company’s Instagram page and to Ana Parzych Cakes went unreturned).

As for the entertainment, add to Mars’ hourlong performance a rehearsal appearance by John Mayer on Friday, and sets from Seal and DJ Marshmello (who is also headlining at Wynn Las Vegas this weekend).

It’s been said that Mars doesn’t even lace up his Nikes for less than $1 million for a private show — and that was eight years ago, long before he commanded top dollar at Park Theater at Park MGM. Whatever the fee, Mars seemed in top form (judging by our social-media raking) as he performed “Treasure,” “Marry You,” and the requisite groove favorite, “Uptown Funk.”

Seal, as is his wont, stepped into the crowd to perform “Kiss From a Rose.” Marshmello was presented with blasts of steam, LED gymnastics across his booth and his ever-present white helmet mask (replicas of which were handed out to guests). Instagram posts indicated the Nemiros were given special, LED-trimmed masks. (Previous rumors of Beyonce and The Chainsmokers proved unfounded.)

Upon entering the pre-ceremony cocktail party, guests were greeted by a 20-piece string section (Coldplay’s “Viva la Vida” was in this ensemble’s repertoire).

The couple’s first dance was to “It’s Gotta Be You” by Isaiah.

The event featured a caviar bar — the bar being constructed of ice. Hotel guests marveled at Dom Perignon being carried through the hotel by the case. The dinner menu, personalized and wrapped in a linens scripted with “KT,” was a five-course experience.

Guests filed out at about 3:30 a.m., posting such reviews as, “This was beyond amazing,” “No words,” and, “This is the most beautiful wedding I have ever seen.”

It wasn’t over, either. Many members of the wedding party — including the newlyweds — filed into Scott Conant’s Masso Osteria for what had to be a somewhat blurry recap of the event.

Omeletes were consumed, mimosas (and shots of Fireball) flowed, and there was even some dancing on the bar. Even the morning after, there was still a lot of golden magic — and a lot of love — in the air.