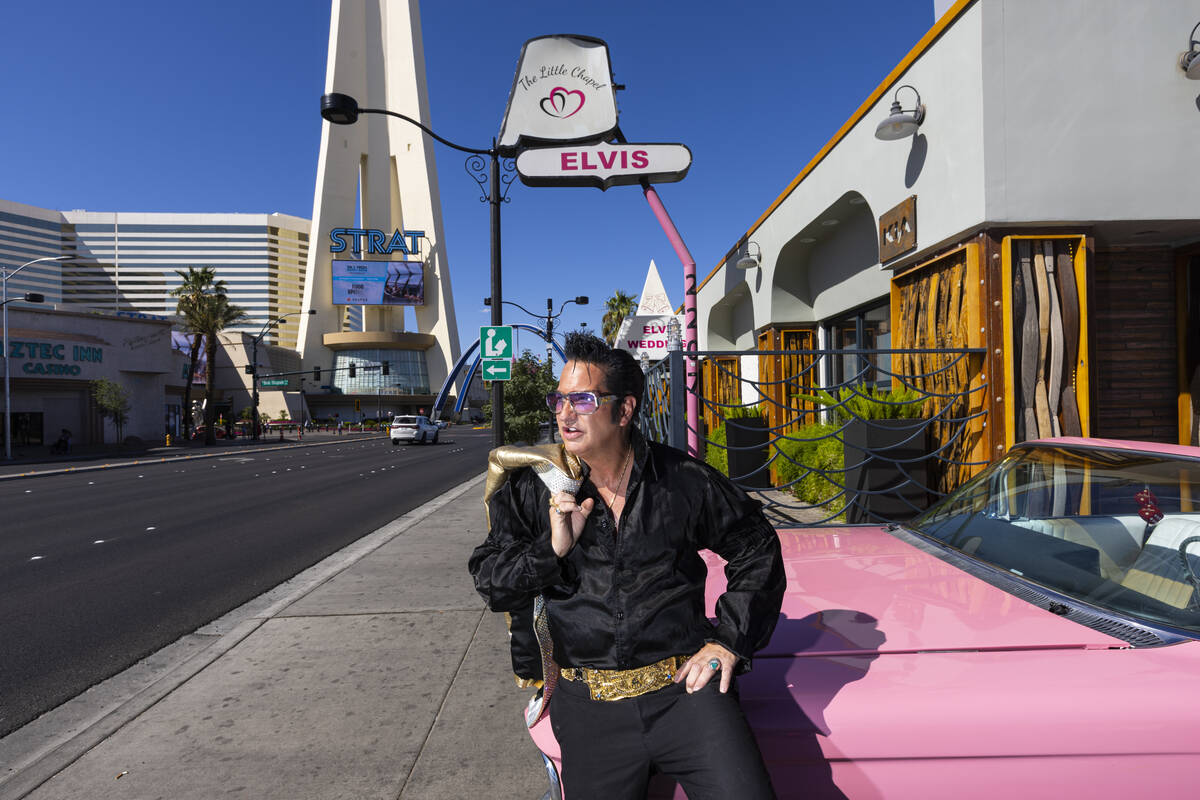 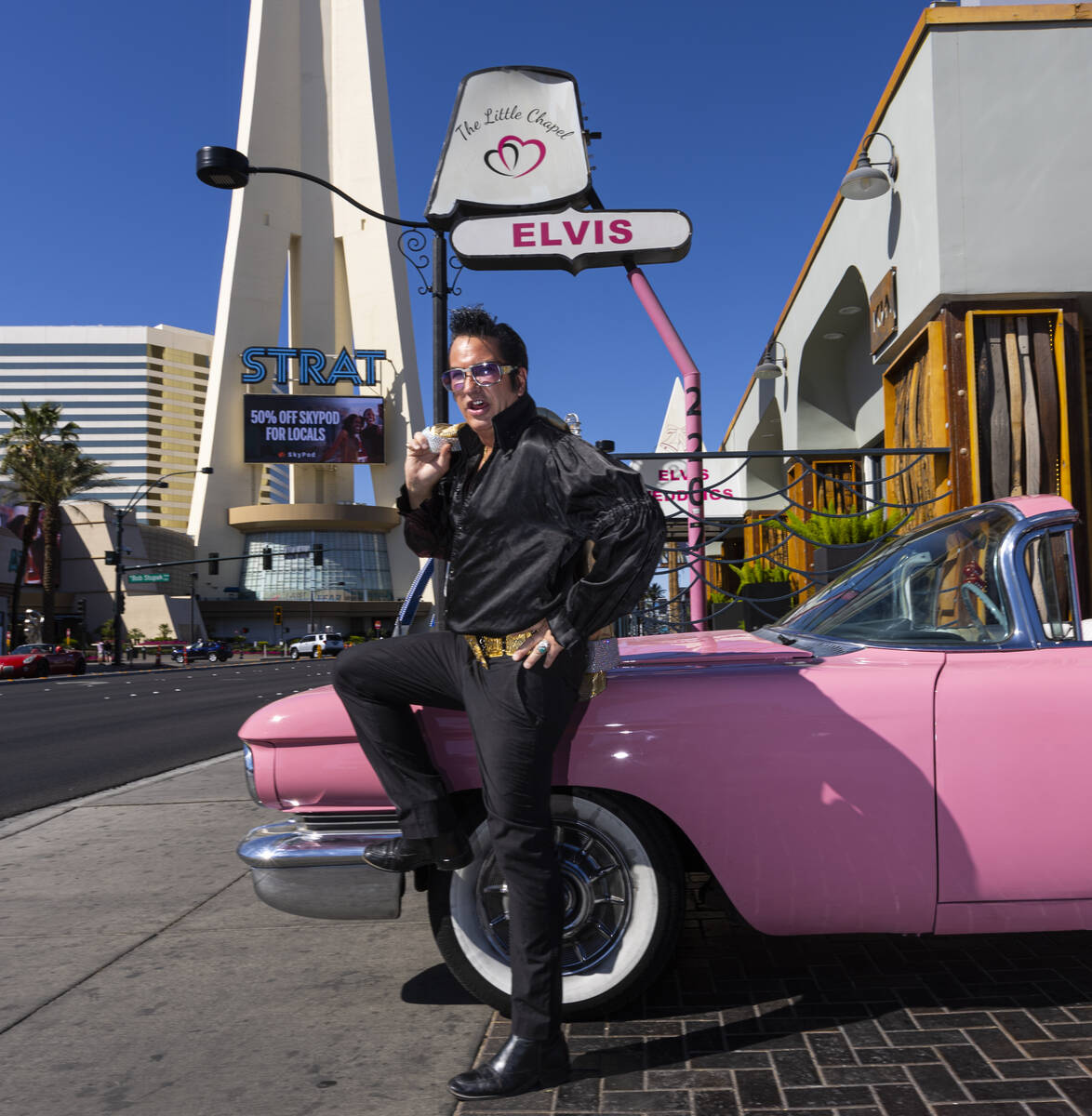 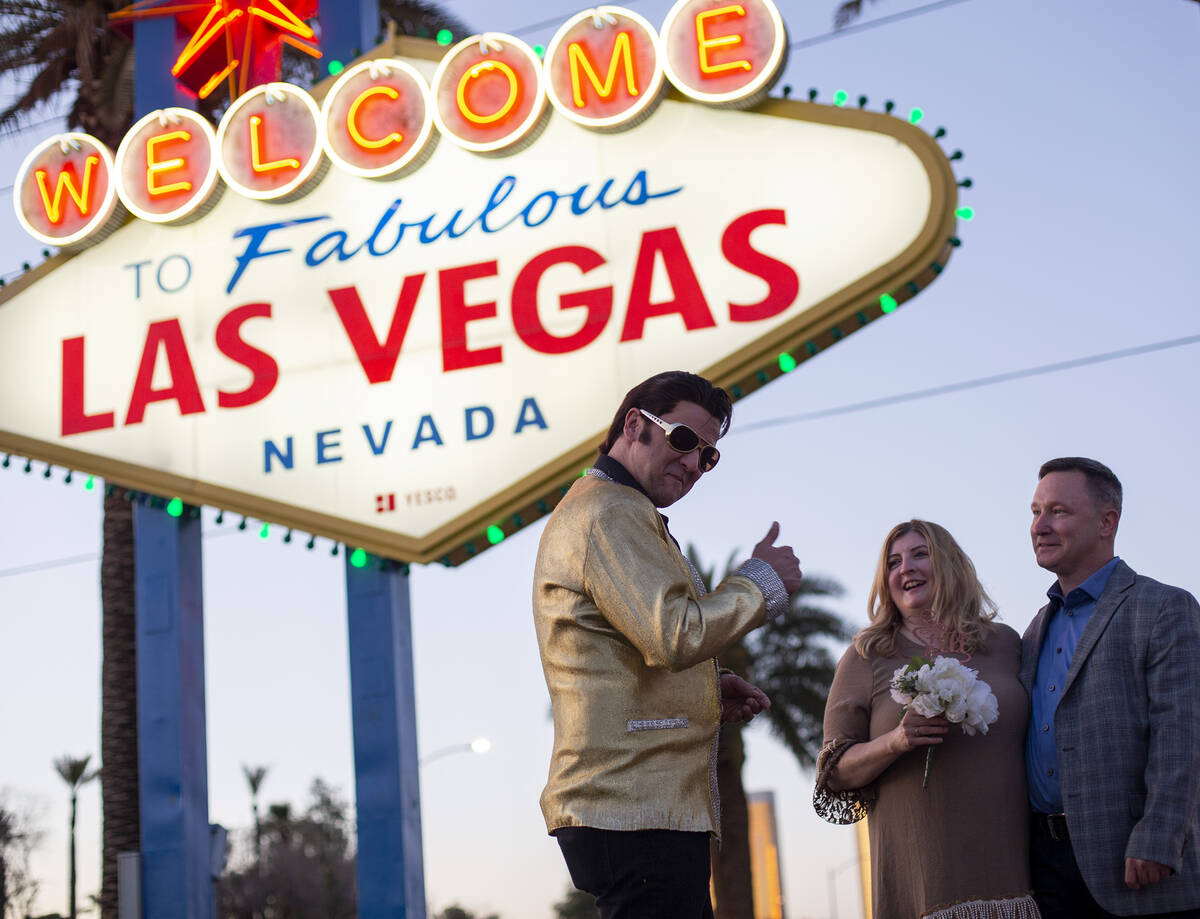 Amanda Anderson and Alan Anderson have their vows renewed by an Elvis impersonator at the Welcome to Fabulous Las Vegas sign, which is lit green for St. Patrick's Day, in March 2021 in Las Vegas. (Ellen Schmidt/Las Vegas Review-Journal) @ellenschmidttt

In his 35-year-career, he’s appeared in numerous public events with both mayors Goodman, including the old Helldorado Days Parade and Great Santa Run in Fremont Street.

Now all of that is in jeopardy because of an effort by Authentic Brands Group to stop Las Vegas chapels from using the King’s name and likeness to drive business and offer wedding ceremonies.

“It would devastate me to have this stop,” Garon said Tuesday afternoon. “I wouldn’t know what to do if I couldn’t perform as Elvis for these couples. It’s at least 80 percent of my business as Elvis.

The company, which authorizes Elvis Presley’s name and likeness, has come after several Las Vegas chapels in recent days, including issuing cease-and-desist orders. The warning calls on them to ditch Elvis (and the moniker The King of Rock and Roll) in marketing and amenities.

“Our wedding industry has been struggling through the pandemic and the economic devastation it has caused,” Goodman texted Tuesday night. “These obviously are not people or a company that give a hoot about this community or its people.”

ABG’s attorney has threatened legal action for those who don’t comply.

‘Moving forward with our business’

Collins runs the business with her husband, Chad Collins, a well-known Elvis impressionist. “We’re going forward with our business. We have a family that depends on Elvis weddings.”

Pete Starzyk said his business, Elegant Vegas Weddings, works with three Elvis ministers — young and slim, older and heavier, and a little person. But he avoids marketing an eponymous package, instead calling it “the King” option. He said he hopes that’s enough to skirt any likeness issues.

“There are ways to get around this, right? You just call him the king,” Starzyk said. “Now, when he’s singing copyrighted songs, that’s another questionable area. (We’ll do everything we can) within legality. I don’t want to be sued.”

The individual chapel owners are not alone in feeling the heat from the licensing company.

“Legends In Concert” is planning a full-scale Elvis show to open the first week of November, after the “Legendary Divas” show of female superstars ends its run. But the company is not going near the Elvis name in the title of that show.

The performances onstage are protected by the state’s “right of publicity” statute that covers tribute shows. But “Legends” company does not have a licensing agreement to use Elvis’ name and likeness in advertising. That relationship ended years ago after “Legends” produced “Elvis Lives” alongside Elvis Presley Enterprises, which then held the King’s licensing rights.

In 2005, EPE, run by Priscilla Presley, was sold to Robert F.X. Sillerman and entertainment company CKX. In 2013, ABG purchased majority interest in the company.

‘People love to be married by Elvis’

Harry Shahoian is a former “Legends” Elvis cast member who will feel a financial crunch if the chapels move off Elvis-specialized performers.

“What you need to realize is, the wedding chapels are 365 days a year, because people love to be married by Elvis,” said Shahoian, who fills the Sunday nuptial slot at Graceland Wedding Chapel in downtown Las Vegas. “I did the whole day Sunday, 22 ceremonies. I’ve done more than 30 in one day, 100 in a week, all of those Elvis-themed.”

Shahoian fills Sundays for full-time Elvis impressionist and Graceland co-owner Brendan Paul. Shahoian also alternates with Travis Allen, another in-demand Elvis wedding officiant, in “All Shook Up” at Alexis Park. That show is another example of an Elvis show that stages a tribute artist with Presley’s music but does not use “Elvis” in the title.

Lehavi said he reached out to ABG’s legal representative and heard back, but remains uncertain about what the company is asking.

“They finally got back to me (Tuesday), after we had been contacting them ever since we got the letter on May 20. They said someone would be in touch,” Lehavi said. “I have a lot of rebuttals, that ‘Elvis’ is in with generic terms like ‘aspirin,’ ‘escalator,’ ‘cellophane,’ ‘dry ice’ that are generic terms that used to be trademarked. But we still don’t know what ABG wants to achieve at the end of this process.”

Elvis’ impact in Las Vegas culture is difficult to measure. Those in the Elvis Tribute Artist community estimate about 150 performers make a living at least part-time by portraying The King (counting the buskers in jumpsuits who pose for photos on the Strip or Fremont Street Experience).

The exact number of Elvis-themed weddings performed in Las Vegas is unknown, as types are not typically reported in an annual census. But the Vegas Wedding Chamber estimates that if 7,000 of the 77,000 annual weddings are performed by the King, then the financial impact could approach $150 million of the $2.1-billion industry.

“Elvis Presley long called Las Vegas his home and his name has become synonymous with Las Vegas weddings,” he said in a statement. “The Vegas Wedding Chamber shares a concern that many of our chapels and impersonators livelihoods are being targeted, especially as many are still trying to recover financially from the hurdles we all endured with COVID shutdowns.”

“We’ll continue to focus on the situation and look forward to a resolution that will not negatively impact the Las Vegas wedding economy or the Elvis wedding experience that so many couples travel to Las Vegas to be part of,” Whaley said.

John Katsilometes’ column runs daily in the A section. Contact him at jkatsilometes@reviewjournal.com. Follow @johnnykats on Twitter, @JohnnyKats1 on Instagram. Review-Journal staff writer McKenna Ross, a corps member with Report for America, contributed to this report.