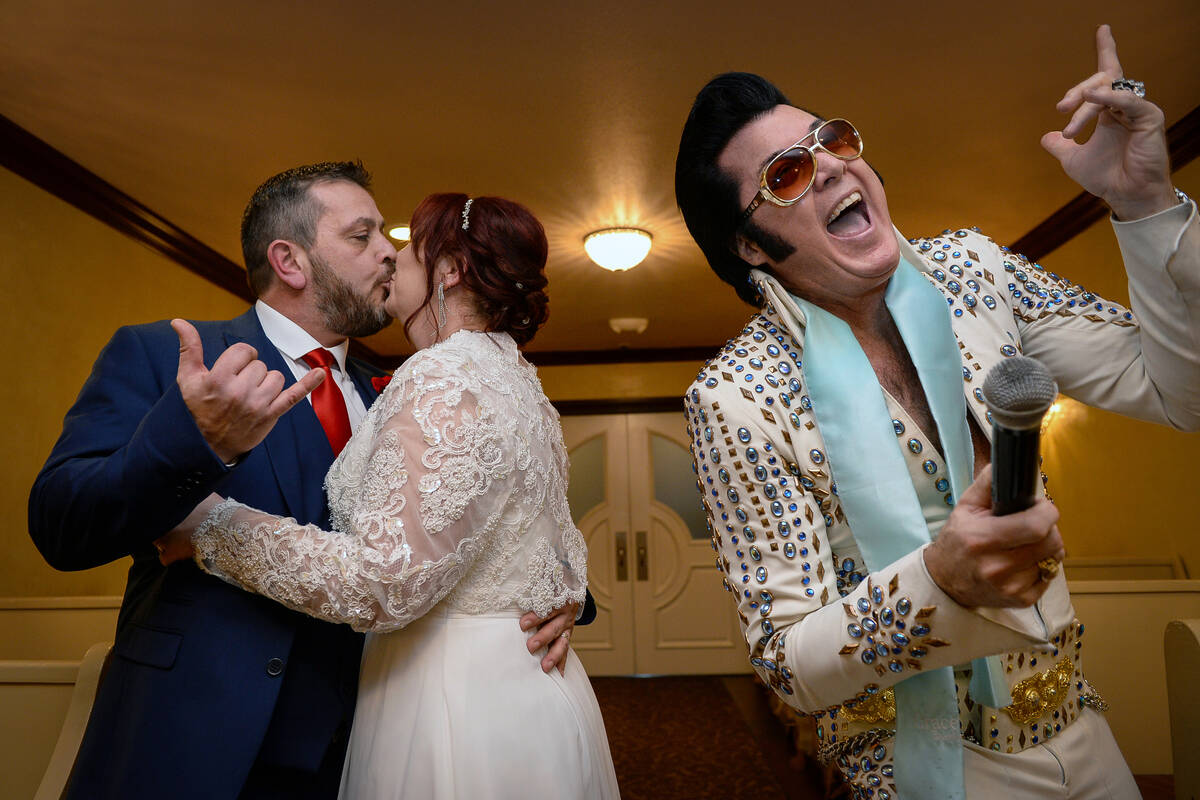 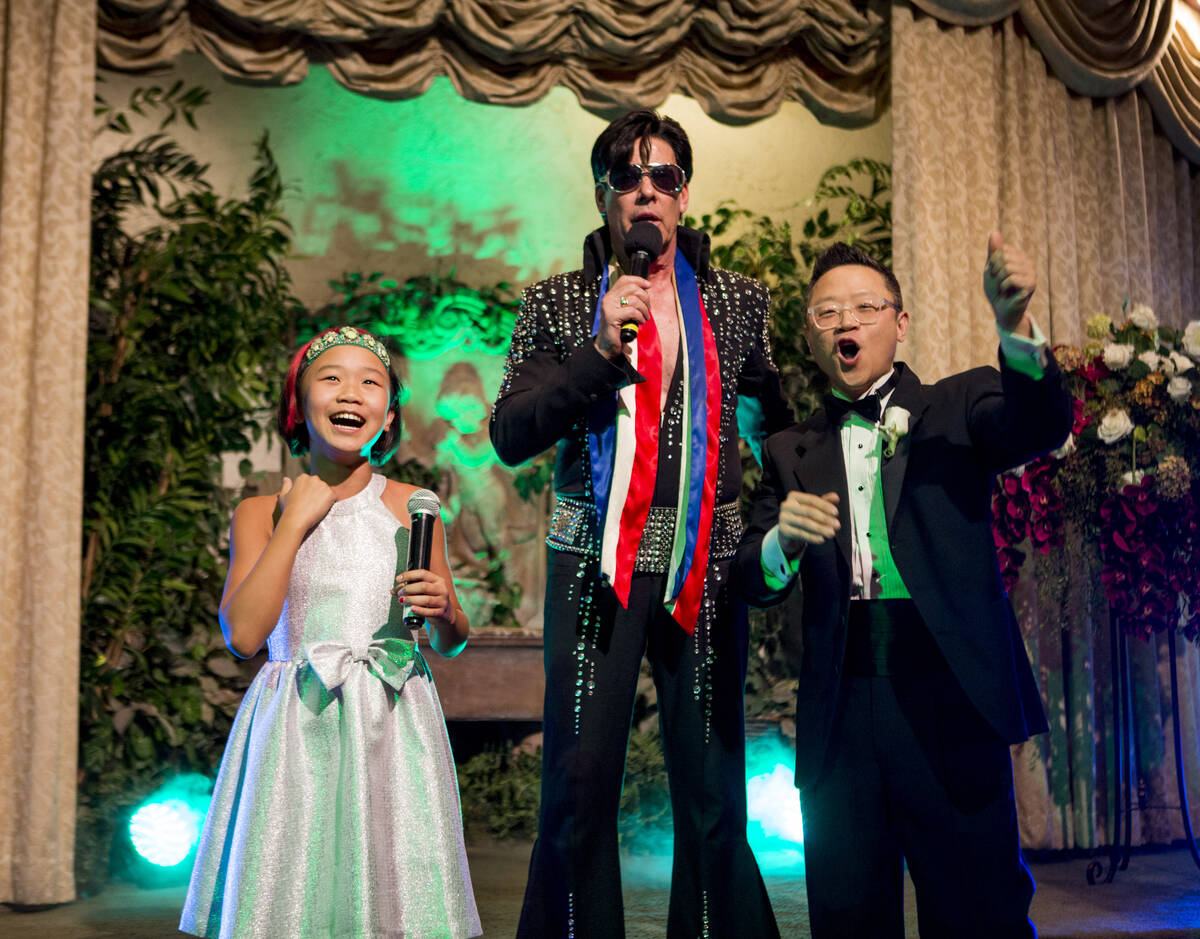 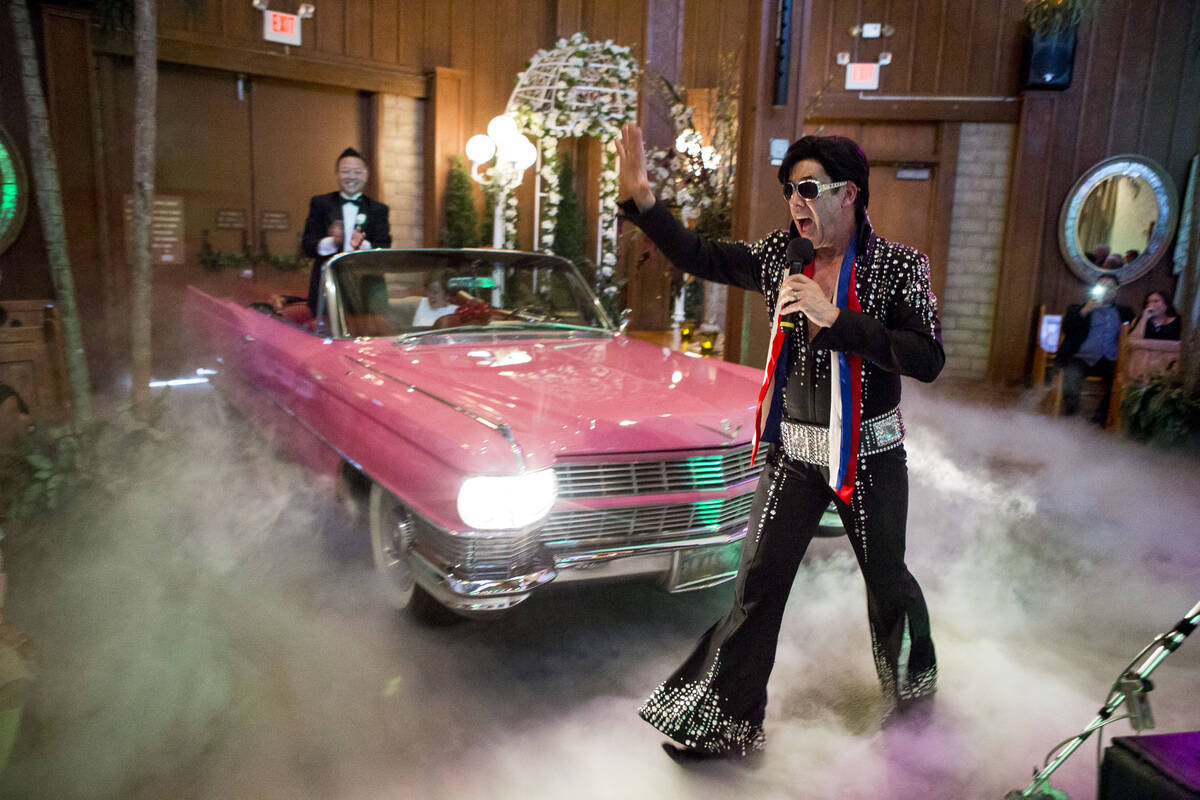 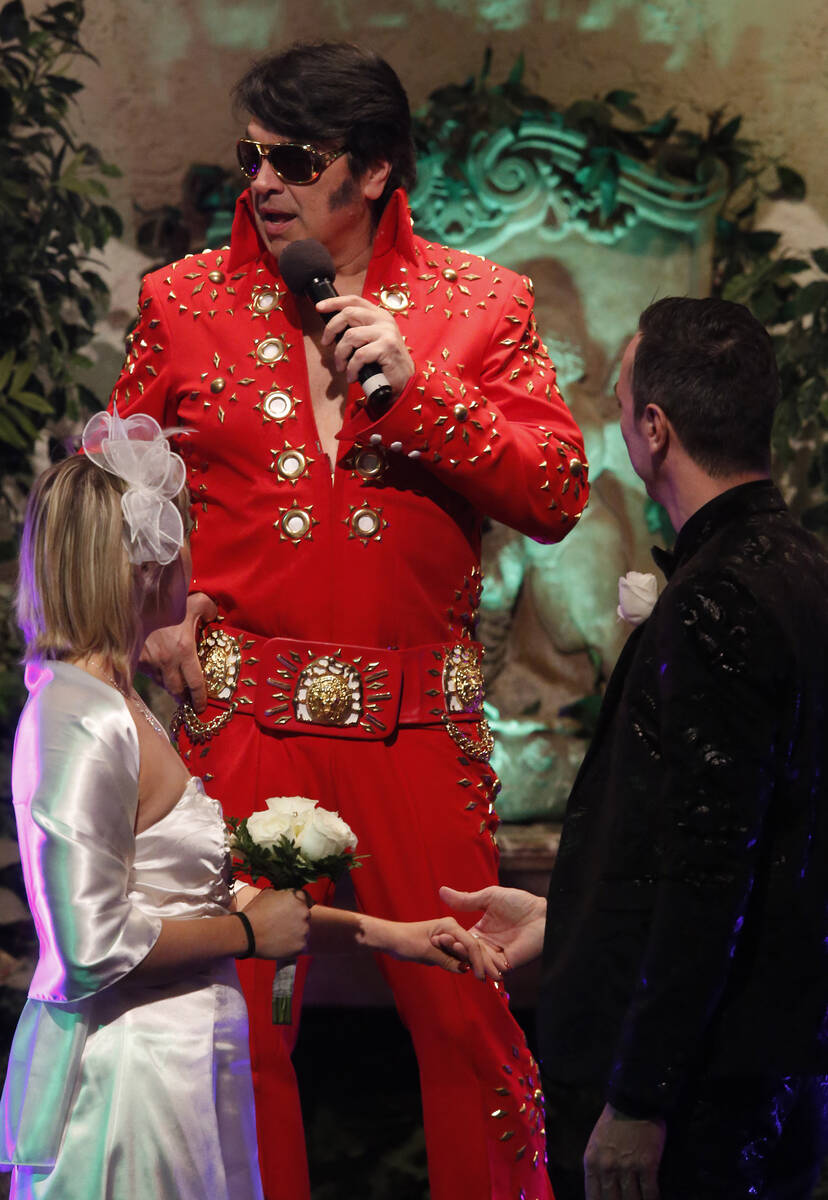 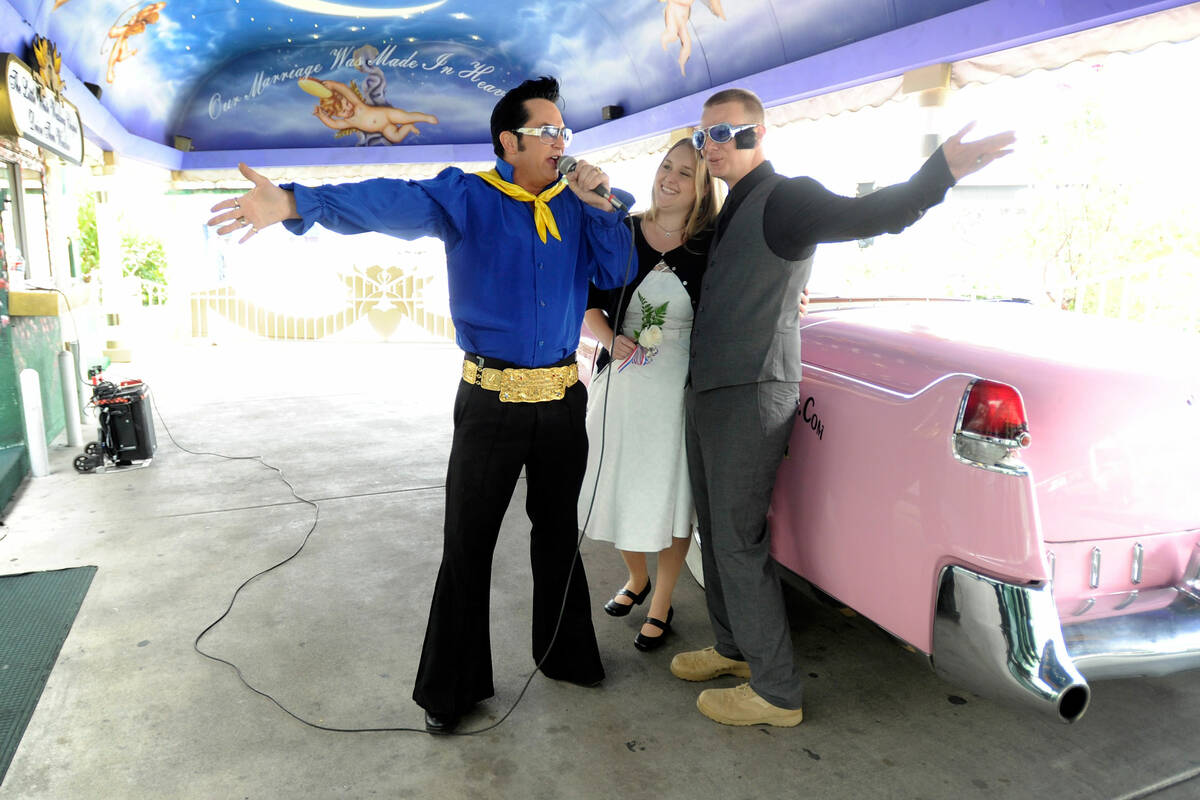 Emily and Sheldon Smith sing along with Elvis impersonator Jesse Garon during their wedding renewal ceremony at the Little White Wedding Chapel on Tuesday, Nov. 12, 2013. The couple from Montrose, Colo., have been renewing their vows on specials days since their original marriage on Oct. 1, 2005. The couple decided to do a "cheesy Vegas Elvis wedding" to commemorate the sequential day of 11-12-13. (David Becker/Las Vegas Review-Journal)

The company that lords over the King’s image and likeness is cracking down on Las Vegas chapels that book Elvis-themed weddings and otherwise embrace his persona. Authentic Brands Group (ABG), which licenses Elvis Presley-related merchandise, has issued a cease-and-desist letter dated May 19 to several Las Vegas chapels.

“This couldn’t hit at a worse time. It’s not a good thing,” Clark County Clerk Lynn Goya, who has presided over Las Vegas’ wedding marketing campaign, said Monday. “It might destroy a portion of our wedding industry. A number of people might lose their livelihood.”

ABG is a licensing company that manages the estates of Marilyn Monroe and Muhammad Ali, and its holdings include about 50 consumer brands (Shaquille O’Neal is among its leading investors). In this instance, ABG intends to stop the unauthorized use of (quoting from the company’s document) “Elvis Presley’s name, likeness, voice image, and other elements of Elvis Presley’s persona in advertisements, merchandise, and otherwise.”

ABG specifies “Elvis, “Elvis Presley,” “and “The King of Rock and Roll” as its protected trademarks.

ABG officials have not responded to an email for response or comment.

Issued and signed by an ABG attorney, the letter states that if an “infringing chapel” does not comply with the terms of the document within a week, the company’s counsel would advise seeking legal action. That date would have been May 27, or last Friday. As of Monday, no chapels have reported they have been contacted further by ABG.

Those businesses targeted include chapels that specialize in, or offer, Elvis ceremonies or have the King’s image as part of their name and logo. Viva Las Vegas/Vegas Weddings, the Elvis Chapel, Elvis Weddings and Las Vegas Elvis Chapel are among those confirmed to have been notified. These Las Vegas chapels, and dozens more, have just begun to recover from the COVID shutdown and a loss of nearly two years of business.

Conceivably, a chapel and ABG could reach a financial licensing arrangement to continue business as usual. The timing of ABG’s action falls just before the heavily hyped Baz Luhrmann biopic “Elvis” is released June 24. That film is certain to regenerate interest in Presley’s career, especially the opportunity to be married in Vegas by an Elvis impersonator.

The result of the ABG warning has sent a shockwave through the Las Vegas chapel community. These businesses depend largely on ceremonies performed by Elvis impressionists. All ilk of tourists, from couples visiting from tiny towns in Montana to Travis Barker and Kourtney Kardashian, call on the King to perform ceremonies. This is the case whether or not the ceremonies are legally binding.

“This could be very damaging to our industry,” Melody Willis-Williams, president of Vegas Weddings and Viva Las Vegas Weddings, said Monday. “Most of us are small businesses, and we’re up against a superpower with a lot of money. It could kill us in lawyer fees to fight this.”

Williams echoed the sentiment of many Elvis tribute artists and chapel owners who say these weddings King’s image in the public domain.

Kent Ripley of Elvis Weddings is among the operators who performs as Presley and is also co-owner of the business. He’s been in business for 25 years and has never received such a warning.

“We get bookings that have been planned for three, four, five years to have an Elvis wedding,” Ripley said. “They want to protect the Elvis brand. But what are they protecting by taking Elvis away from the public?”

Already, chapels are scraping Elvis from their websites and ceremony listings. One couple Sunday was disappointed after ordering an Elvis ceremony several months ago only to have the Elvis impressionist dressed in a leather jacket, jeans and a fedora for a “rock ‘n’ roll”-themed experience.

Elvis-themed ceremonies are clearly a significant piece of the state’s tourism pie. The wedding industry produces $2 billion a year. Clark County has redoubled its efforts to re-establish Las Vegas as the “Wedding Capital of the World,” issuing its five-millionth wedding license in February.

Operators stress that there is no stopping a person dressed as Elvis from performing a ceremony at, say, the Elvis suite at Westgate Las Vegas or Welcome to Fabulous Las Vegas sign. And the right to use Elvis’ image in stage shows (such as “Legends in Concert” and “All Shook Up” in Las Vegas) is protected by Nevada’s “right of publicity” statute that covers tribute shows.

“An Elvis show is a performer essentially entertaining others by re-creating that person onstage,” Tratos said Monday. “The juxtaposition would be, deciding to go to a mechanic as Elvis. Is he really an entertainer, creating a story? Or simply using the Elvis name to essentially draw a customer who can say, ‘I had an Elvis guy fix my car.’ The question is, are you using it to attract attention versus storytelling?”

But there are no ticketed Elvis shows currently on the Strip (“All Shook Up” plays the off-Strip Alexis Park), while Elvis weddings remain enormously popular. All 55 of the city’s free-standing chapels have the option of hiring an Elvis artist for a ceremony, even without “Elvis” in the business title.

Williams says her business does “thousands” of Elvis ceremonies a year, not making the figure public because the wedding industry in Vegas is known to be hyper-competitive. But Graceland Wedding Chapel General Manager Rod Musum says his business performs about 6,400 Elvis weddings annually. Musum says Graceland has not been served with a warning from ABG.

But Kayla Collins of LasVegasElvisWeddingChapel.com and the Little Chapel of Hearts has been warned. She’s holding fast until her attorneys sort out how she can continue business in the face of this scrutiny.

“We are a family-run business, and now we’re hanging with the big dogs,” Collins said Monday. “My husband built the website by himself. That’s our bread and butter. I don’t get it. We were just hitting our stride again through COVID, then this happens. I’m just trying not be freaked out by it.”

Staying in voice, Pete Vallee, aka “Big Elvis,” sings at the Piano Bar at Harrah’s at 2, 3:30 and 5 p.m. Mondays, Wednesdays and Fridays. Vallee also hosts a “Blue Hawaii”-themed gig at The Golden Tiki from 4 to 7 p.m. the first Tuesday of every month.