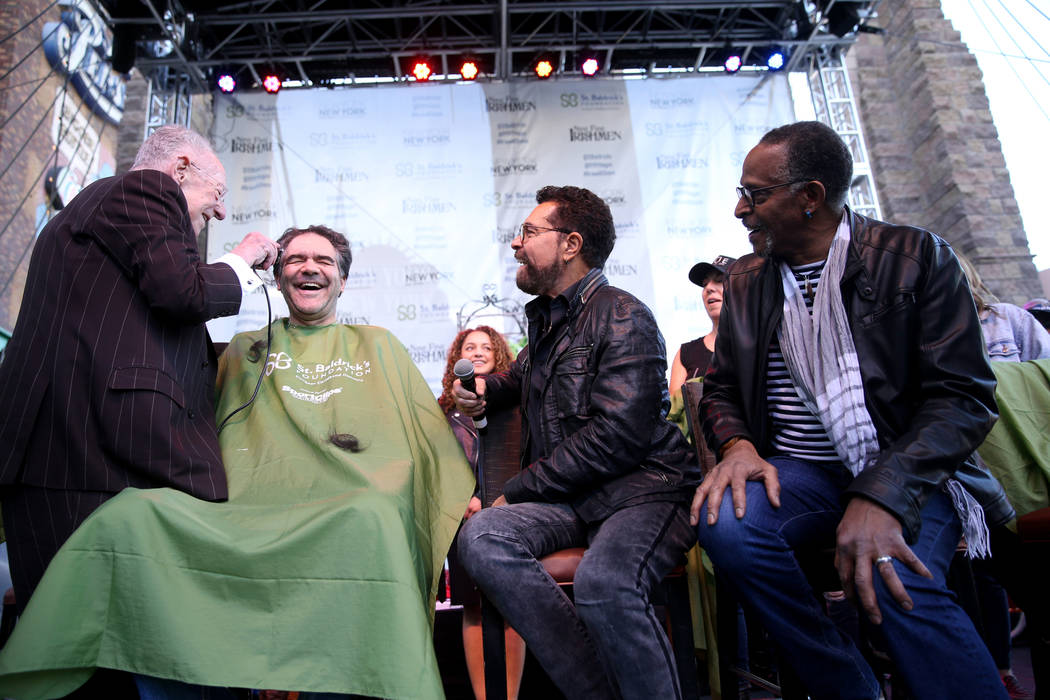 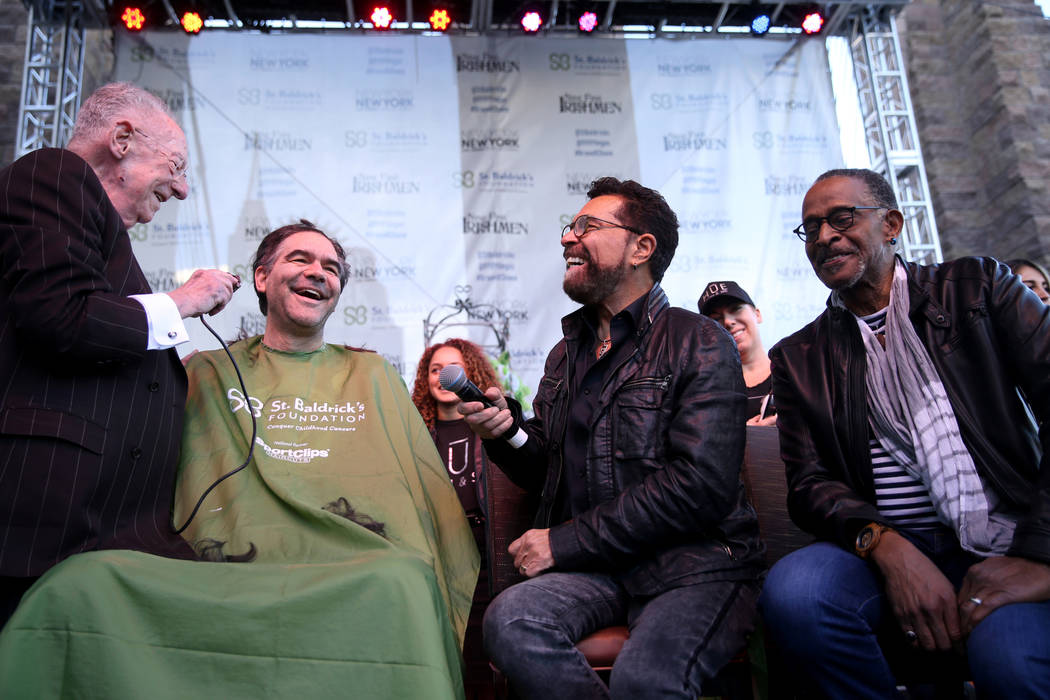 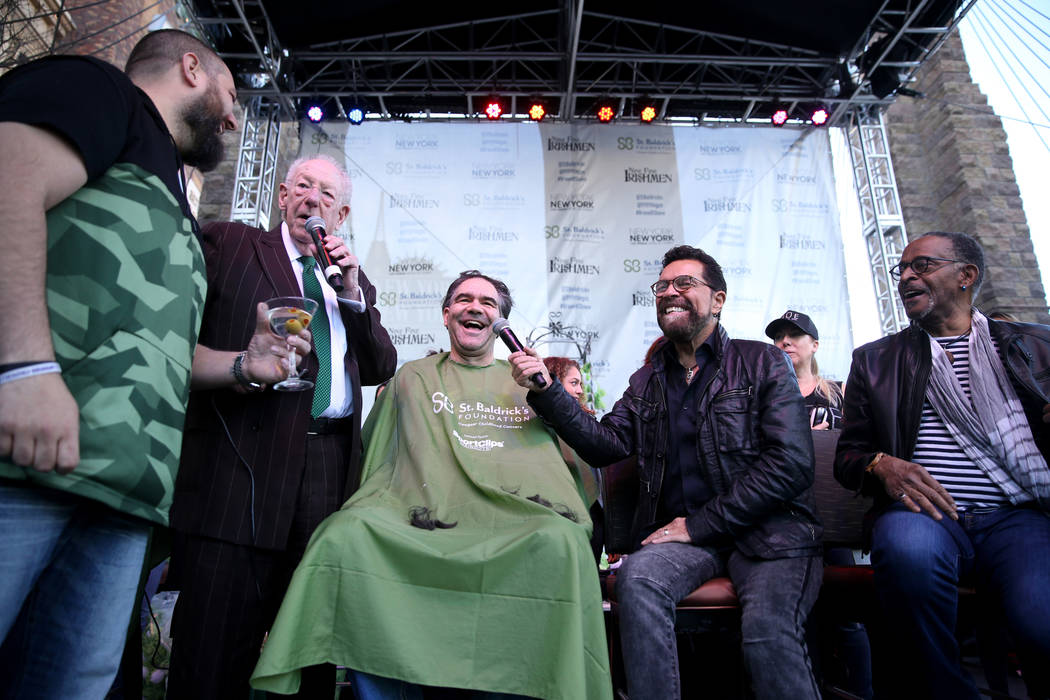 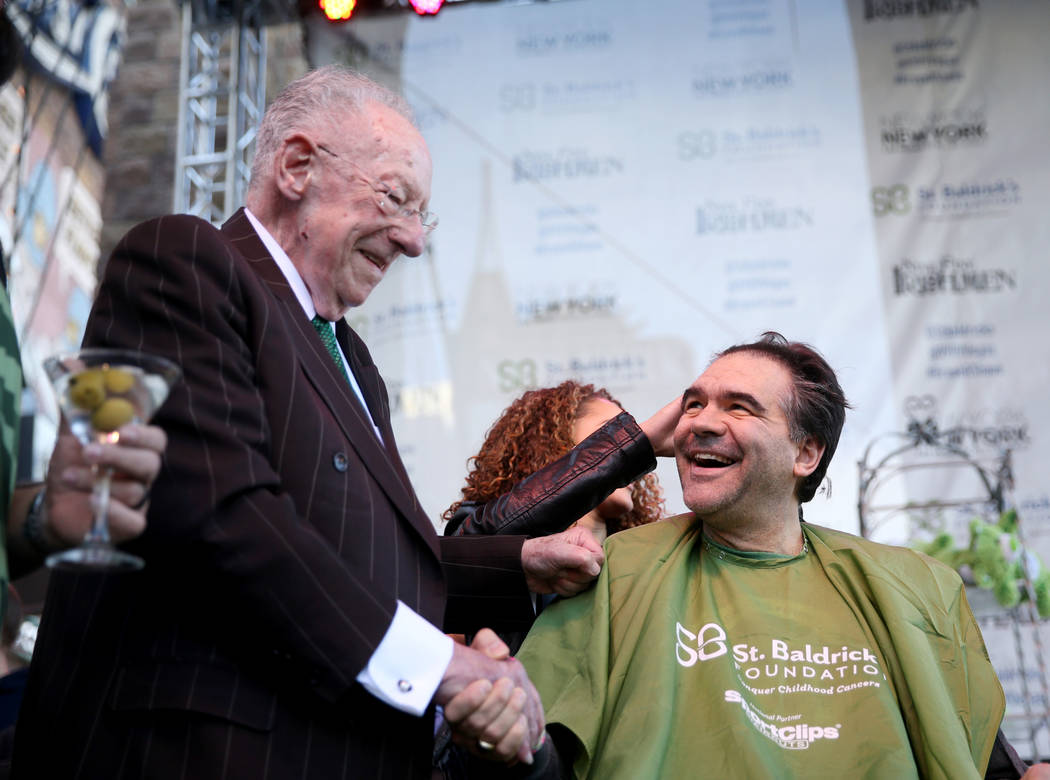 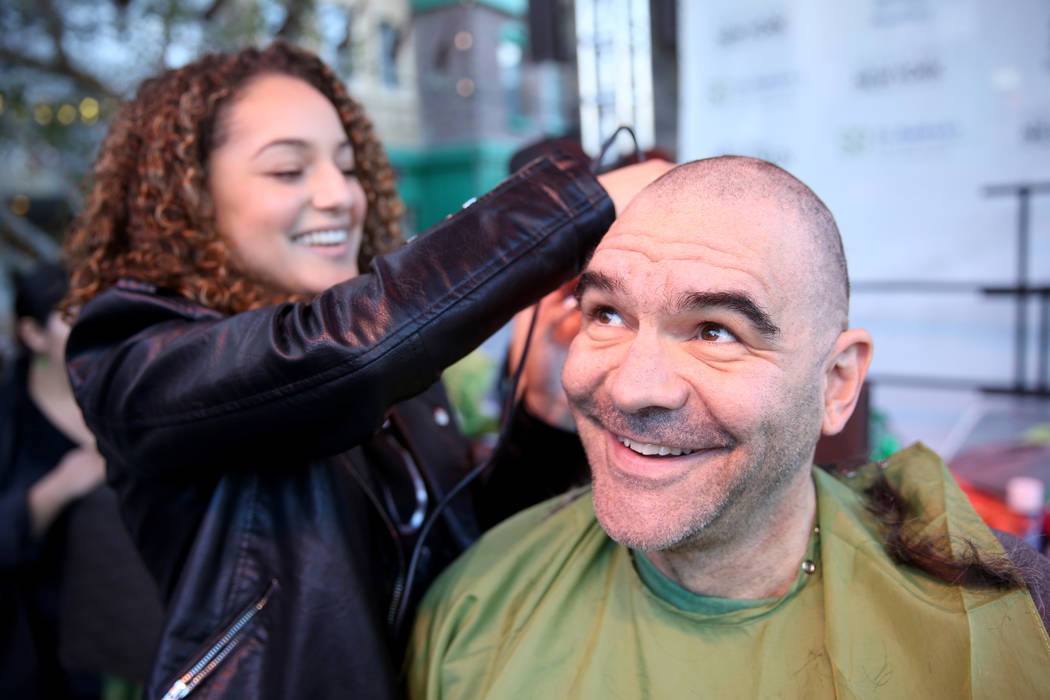 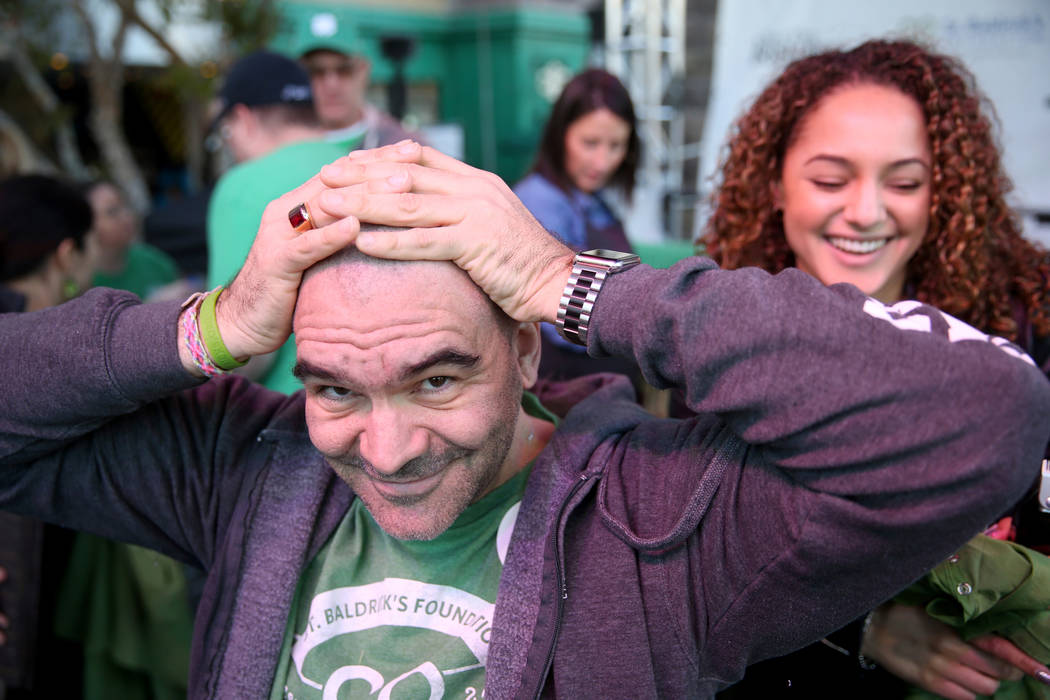 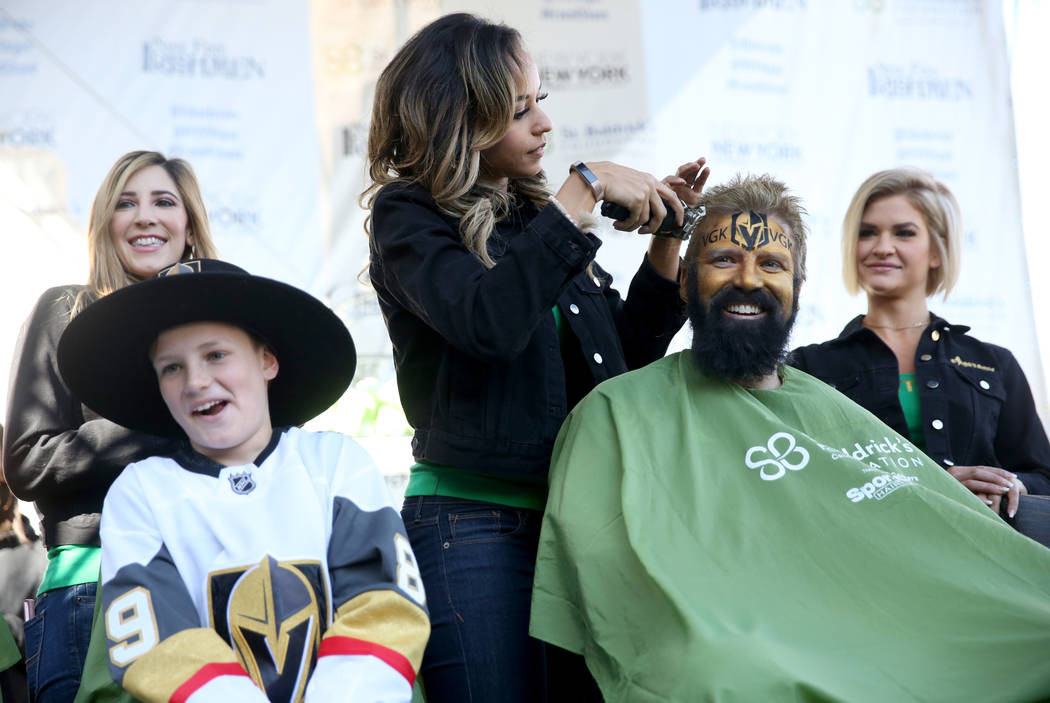 John McManus of Las Vegas gets his head shaved by Ashton of the show Fantasy during St. Baldrick's Foundation shave-a-thon on the Brooklyn Bridge at New York-New York in Las Vegas, Saturday, March 9, 2019. Looking on are McManus' son Peter McManus, 11, and Soolin, left, and Abby, of Fantasy. McManus was honored as the first person to raise $1 million. (K.M. Cannon/Las Vegas Review-Journal) @KMCannonPhoto 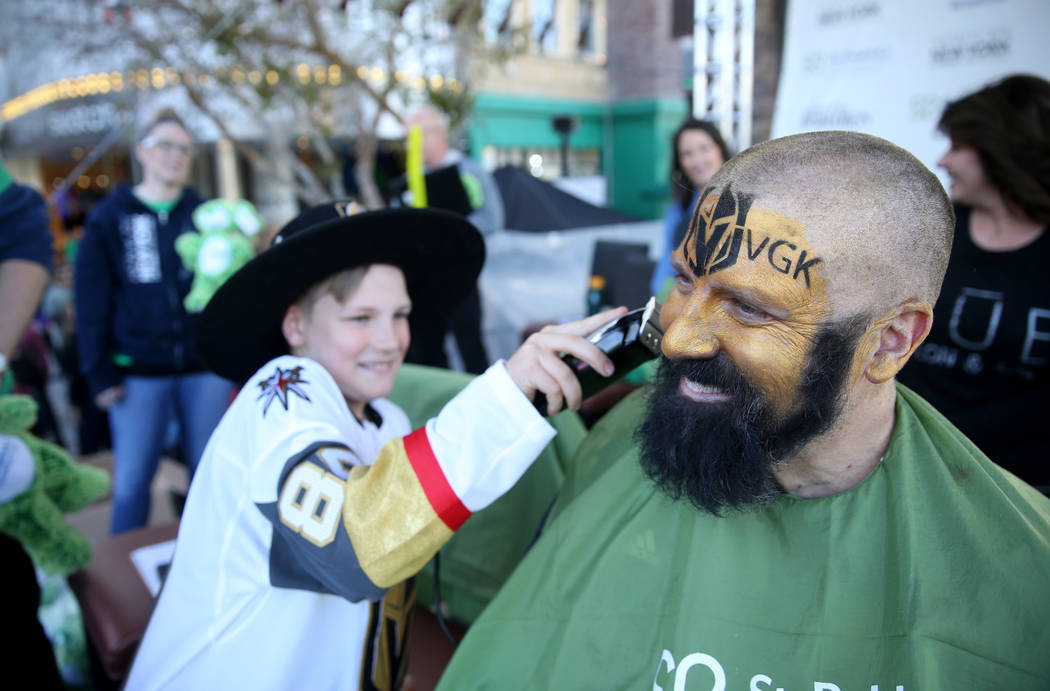 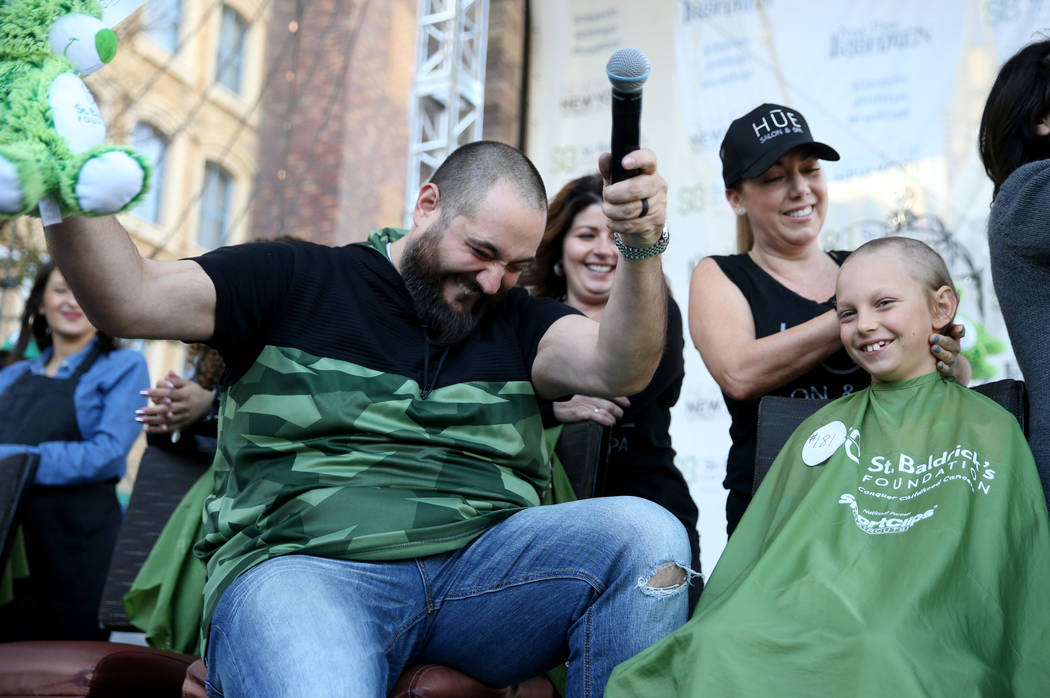 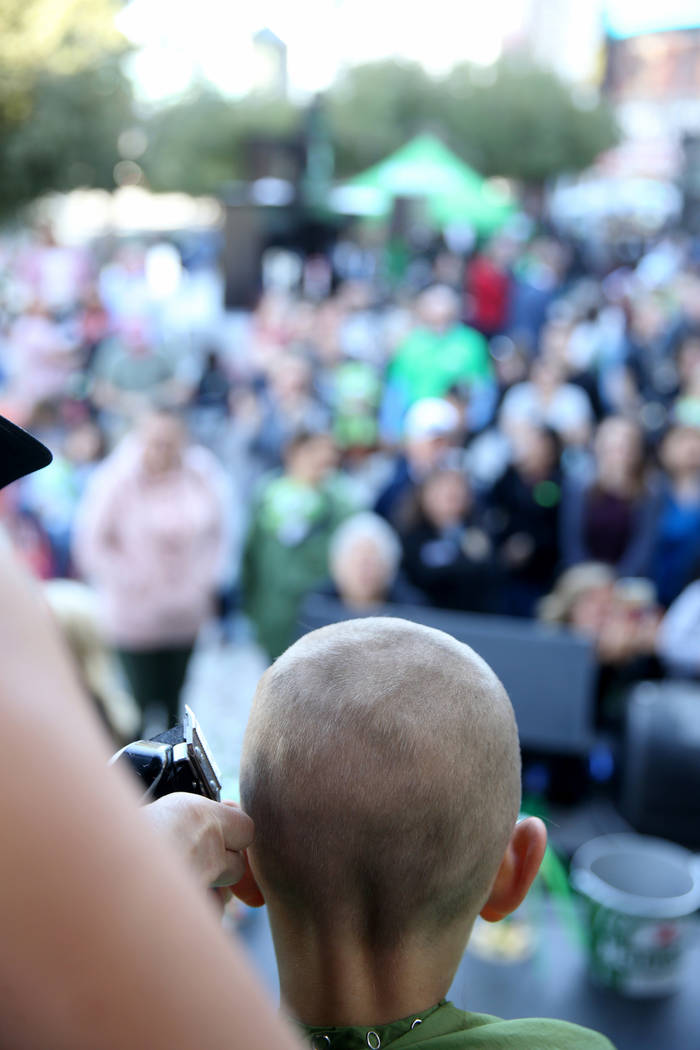 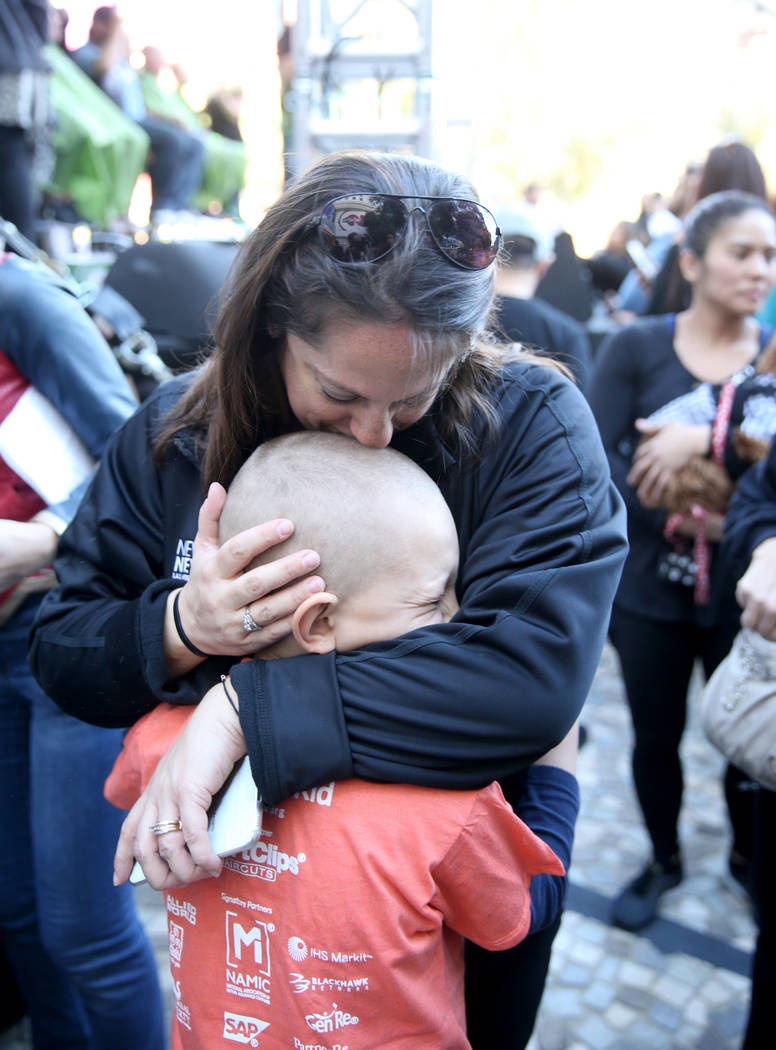 Dylan Foote, 8, of Las Vegas gets a hug from his mother Melanie after getting his head shaved during St. Baldrick's Foundation shave-a-thon on the Brooklyn Bridge at New York-New York in Las Vegas, Saturday, March 9, 2019. (K.M. Cannon/Las Vegas Review-Journal) @KMCannonPhoto 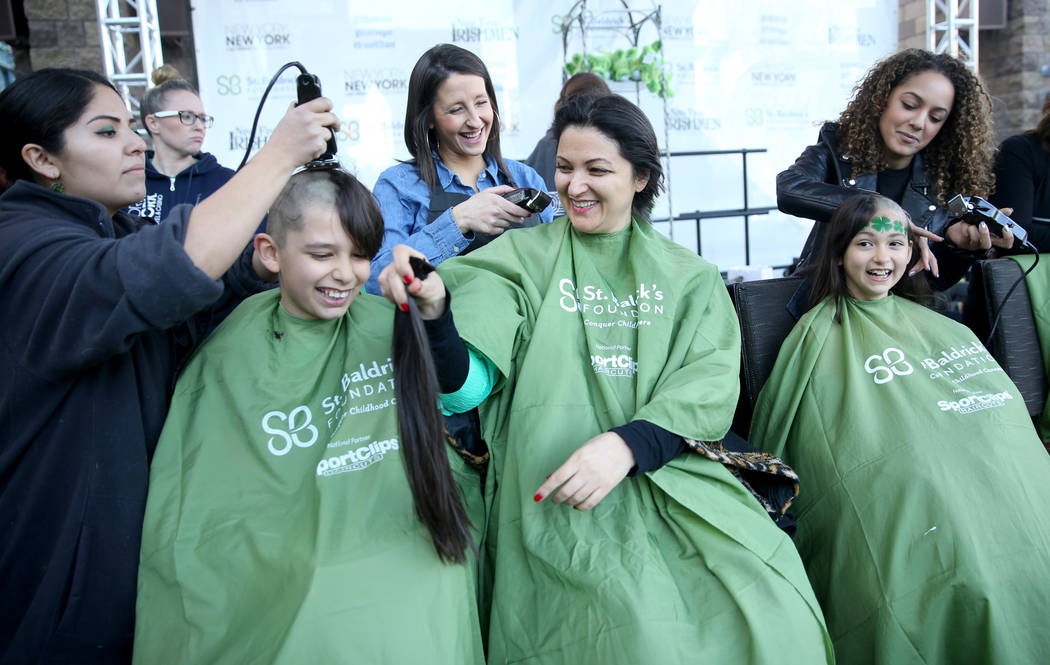 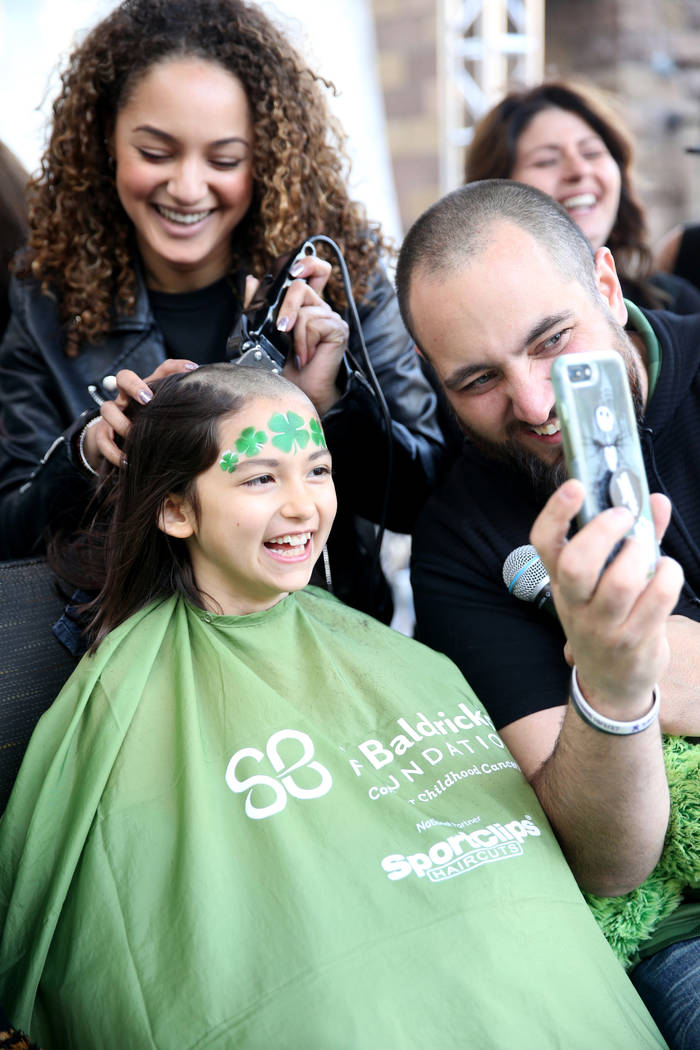 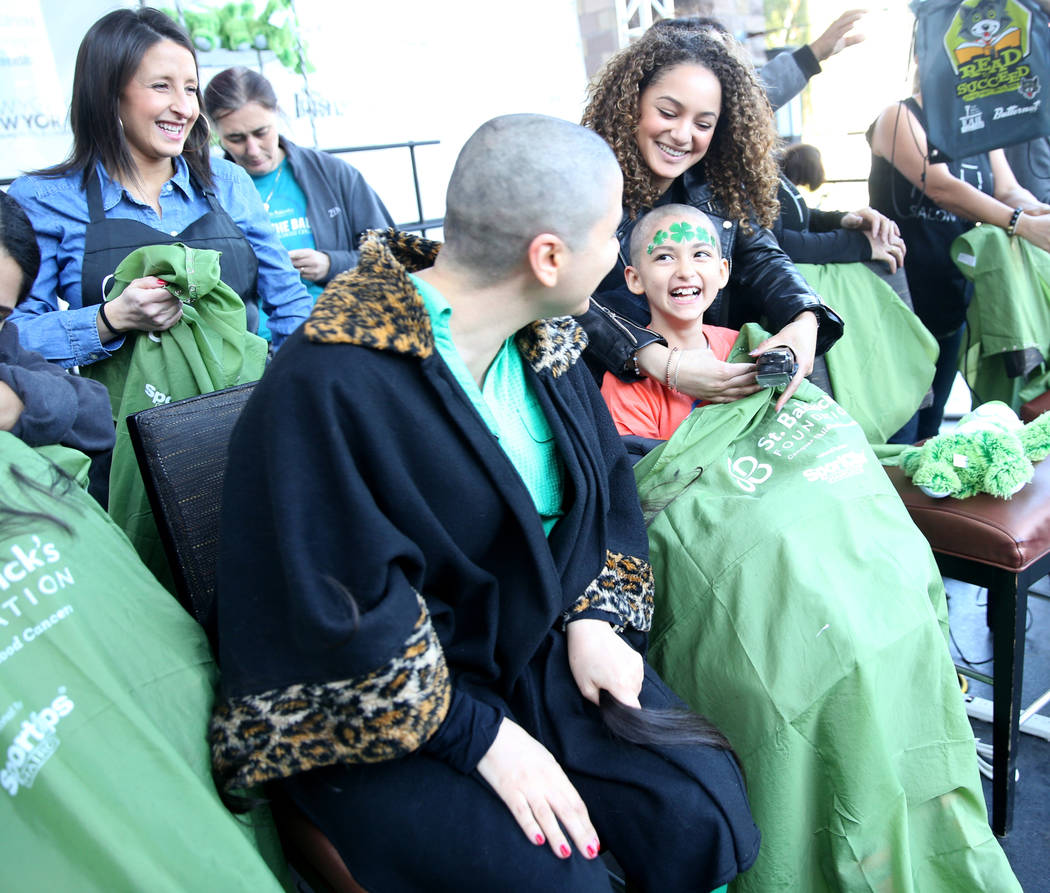 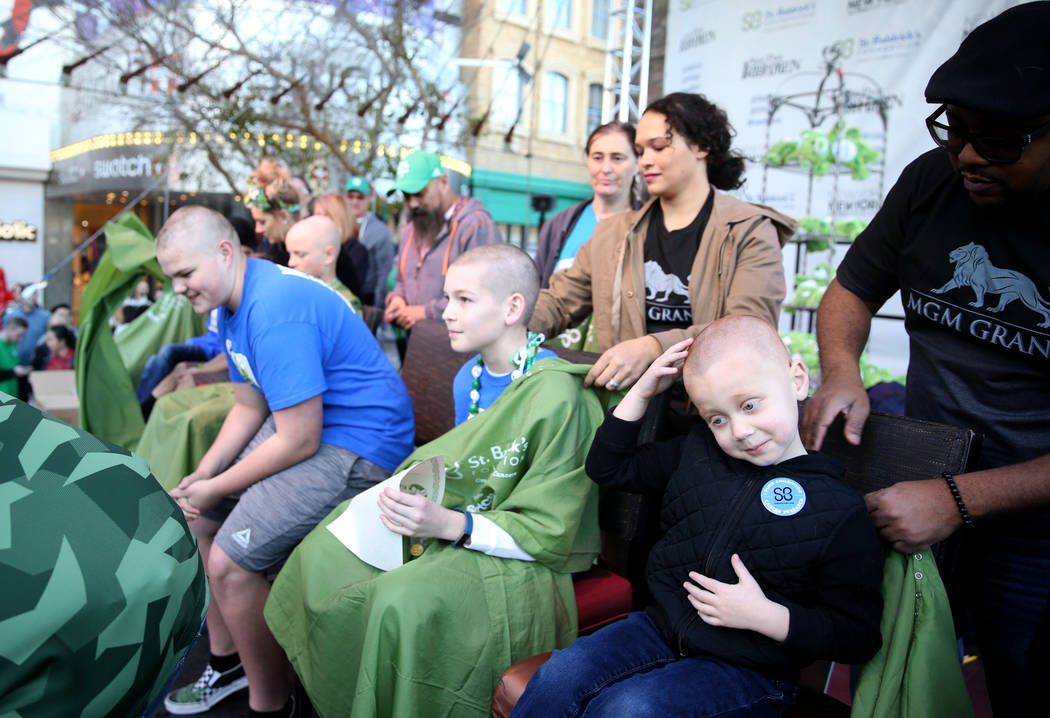 When the man who is shaving your head arrives for the assignment having already nicked himself, you get nervous.

“I did this while I was practicing this morning,” former Las Vegas Mayor Oscar Goodman said Saturday afternoon at Nine Fine Irishmen at New York-New York. He then tilted his face to show a fresh cut on his right cheek. “I was using a straight-edge.”

Goodman had joked about practicing with the old-style shaving implement during the week leading up to the St. Baldrick’s Foundation Shave at NY-NY’s Brooklyn Bridge. It was the first time the three-term mayor had taken part in the event, which was launched at McMullan’s Irish Pub in 2007 and at New York-New York two years later.

Goodman agreed to take part in the charity event, which raises money for research and treatment of childhood cancer. We were joined by a surprise visit from favorite Las Vegas headliner Clint Holmes and the great actor Antonio Fargas, famous for originating the Huggy Bear character on the 1970s crime-drama “Starsky & Hutch.”

This was my seventh shaving, with Hizzoner causing a stir (with his ever-present martini) as he walked onstage. After a few passes, Goodman goosed the crows at Nine Fine for an extra $500, calling out, “Five-hundred dollars is nothing. For the people I’ve represented, $500 is pocket change!” We did collect a bit more than that during our time onstage.

New York-New York executive James Healy joined Vegas Golden Knights in-arena announcer and KWNR 95.5 FM-The Bull personality Wayne “Big D” Danielson to emcee our spot onstage (we missed Mark Shunock’s stint onstage). Those who took part as celeb shavers in the daylong event were the casts of “Wow — World of Wonder” at the Rio, “The Chippendales” at the Rio, “Legends In Concert” at Tropicana, “Thunder From Down Under” and “Tournament of Kings” at Excalibur, “Fantasy” at Luxor, “Zumanity” and the Coyote Ugly dance team at New York-New York, “Absinthe”at Caesars Palace, “Opium” at the Cosmopolitan, and “Magic Mike Live” at Hard Rock Hotel.

Yes, it was a whole thing.

The monetary goal was to surpass last year’s $600,000 take from the New York-New York event. Donations are still being tabulated, but were heading toward the $320,000 mark in the late-afternoon, and the final figure will include money raised throughout the year. If we fall short, no problem. We’ll just summon the Barber.