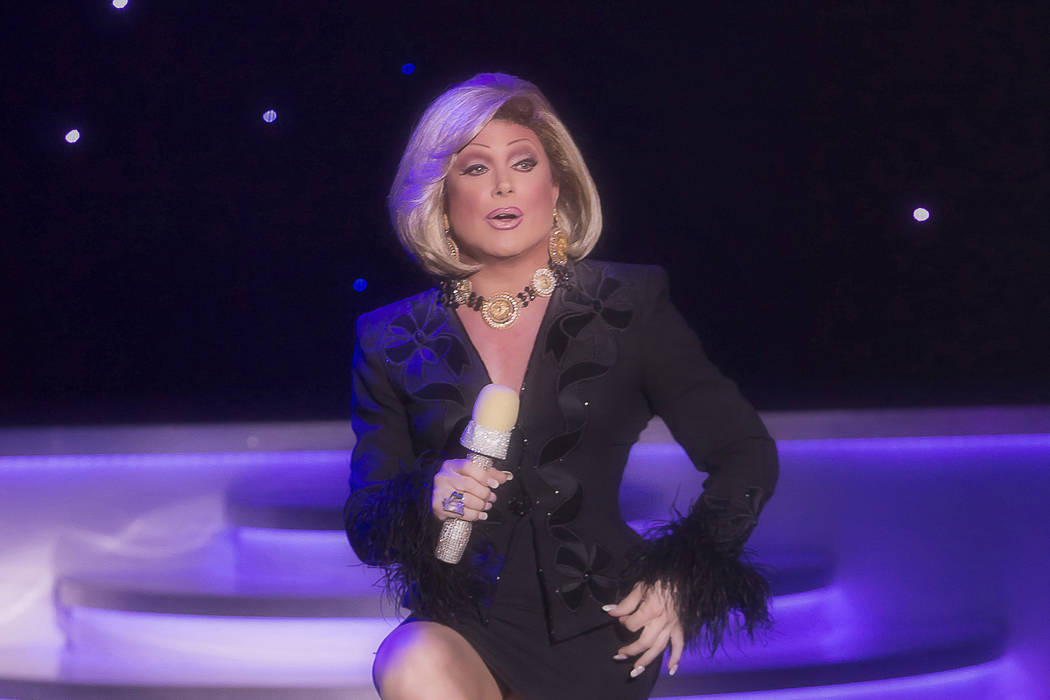 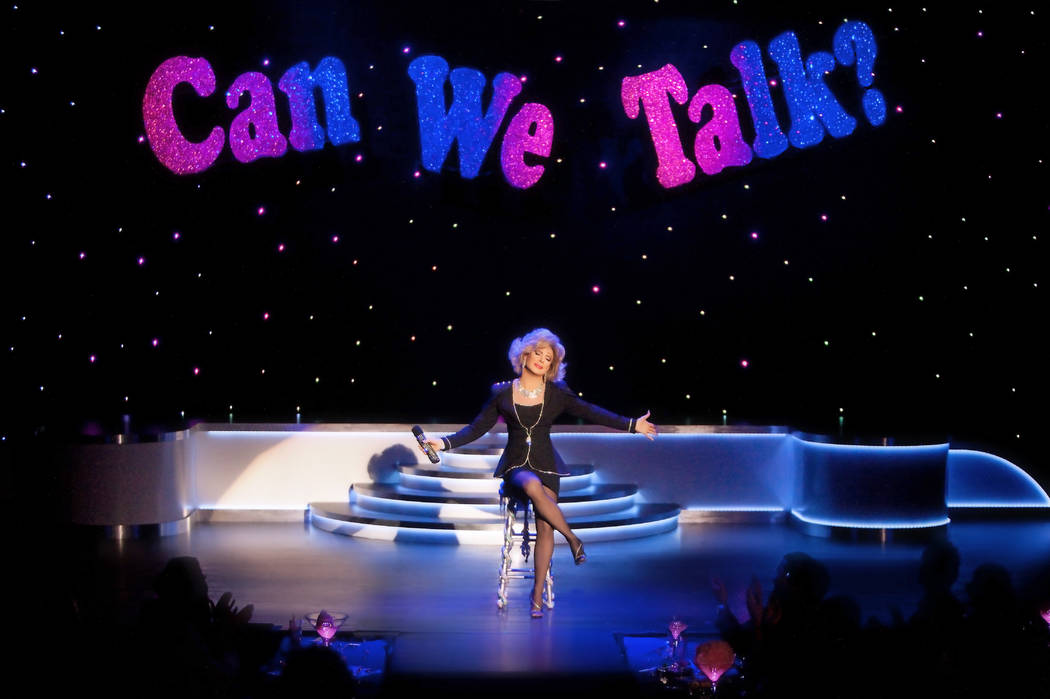 Frank Marino is shown at the then-Imperial Palace Showroom during a show in 2010. Marino is set to join the "Legends in Concert" cast on Sept. 11. (Erik Kabik/ Erik Kabik Photography) 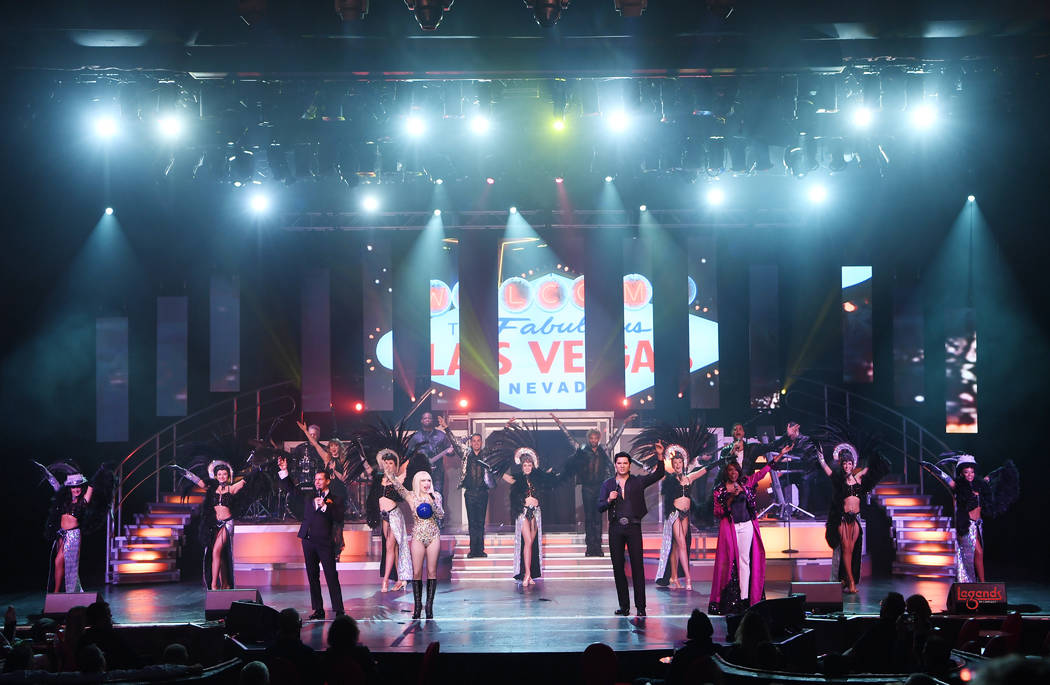 The finale of "Legends in Concert" at Tropicana Theater. Frank Marino joins the cast on Sept. 11, joining portrayals of Lady Gaga, Elvis, Freddie Mercury and Pat Benatar. (Legends in Concert)

Frank Marino says it himself: “It’s been a really strange year.”

This, from a man who has worn ball gowns to work for 33 years.

Away from the stage for more than 13 months, the long-running star of “Divas Las Vegas” is returning to performance with “Legends in Concert” at Tropicana. Marino will emcee the show in his famous Joan Rivers role from Sept. 11-Nov. 19.

Marino’s portrayal is a classic limited engagement. He’s leaving in “Legends” in November with plans to revive “Divas” in February on a new venue on the Strip. And this run will close the curtain for Marino’s Rivers character.

“It just made sense to retire it with ‘Legends,’ to do it with their show,” Marino said during a conversation at his Las Vegas home Friday afternoon. “Ever since Joan passed, it’s been more a tribute than an impersonation. I’ll be doing Joan between the acts, with new material. It’s been killing me not to be able to do my new Donald Trump jokes, not being political but just funny lines that deal with him being in Washington, and having to move into a smaller house in a very bad neighborhood.”

Twenty-five years ago, Marino actually joked with Rivers on her late-night talk show about taking the character to “Legends.” As Rivers interviewed a quartet of impersonators, she asked the group, “What happens when I die? You can continue, can’t you?” Marino answered, “We’re doing ‘Legends in Concert!’”

Rivers herself appeared onstage at the old Tiffany Theater at Trop, early in her career. She died Sept. 4, 2014, and Marino has continued his portrayal.

Marino joins the “Legends” fall lineup of Freddie Mercury, Pat Benatar, Lady Gaga and Elvis. Mercury and Benatar (who is performed herself at Encore Theater on Friday and Saturday night) are new to the Vegas cast. “Legends” is in its 36th year on the Strip, the longest-running stage show currently in production in Las Vegas.

“Legends” officials and hotel execs are welcoming the 55-year-old Marino to the show.

“Legends in Concert continues to evolve with each new incredible cast, and we are very excited to bring legendary comedy to our fans with the talents of the one and only Frank Marino,” said “Legends” Corporate Marketing Director Mark Mercer. “It is truly fitting that he will perform his tribute to Joan Rivers in the same showroom she once headlined.”

“Since its debut at Tropicana Las Vegas, Legends in Concert has been a hit amongst our locals and guests on property,” said Tropicana General Manager Aaron Rosenthal. “We are absolutely thrilled to welcome Las Vegas legend, Frank Marino in the new tribute show this fall season.”

The “Legends” run marks Marino’s first performance in a ticketed show since “Divas” was forced to close abruptly after its performance at The Linq Hotel on June 26, 2018, after an internal Caesars Entertainment investigation found that the show had mishandled funds intended to be delivered to Make-A-Wish of Southern Nevada. Marino made financial restitution to Make-A-Wish, exceeding six figures, and publicly apologized for what he described as his “negligence” in the episode. The two sides thus agreed to end their partnership.

The Nevada Gaming Control Board also launched its own investigation into the matter beginning in July 2018. The board announced in January it had closed its review, without revealing any of its findings. Marino says he has never heard from anyone at the Gaming Control Board regarding the incident that led to his show’s closing; Caesars Entertainment has declined further comment on the matter.

“It’s been tough, I’m not going to lie, and I wouldn’t wish this on anybody,” said Marino, who has been treated for anxiety during his time away from the stage. “I never saw it coming.”

Marino has been in talks with several properties over the past year. Among them: Mirage’s 1 Oak Nightclub (before it staged “Scott Bradlee’s Postmodern Jukebox Hideaway), SLS Las Vegas (before it brought “Ester Goldberg’s Totally Outrageous Brunch” to The Sayers Club), under-development Notoriety at Neonopolis (Marino says he did not want to be a “guinea pig” in a new downtown venue), the Stratosphere (where Marino had actually approved a news release announcing “Divas 2.0” before the hotel backed out of the deal without explanation), and — just last month — Hooters’ Night Owl Showroom (where the hotel’s ownership lineup is expected to change, soon).

The result left Marino with one sensible option: Perform as Rivers once more in “Legends” and set up for a return with “Frank Marino’s Divas Cabaret,” in 2020. He says he wants to be onstage before the long-anticipated “RuPaul’s Drag Race” show rolls into Flamingo this fall.

Marino is also finishing his latest book, “Drags to Riches,” which he plans to self-publish next year.

“It’s pretty much written now, except for the last chapter,” says the man who opened in “Evening at La Cage” at the Riviera in 1985. “The book will explain everything that has been read, or misread, about me. I just want a big, triumphant ending.”