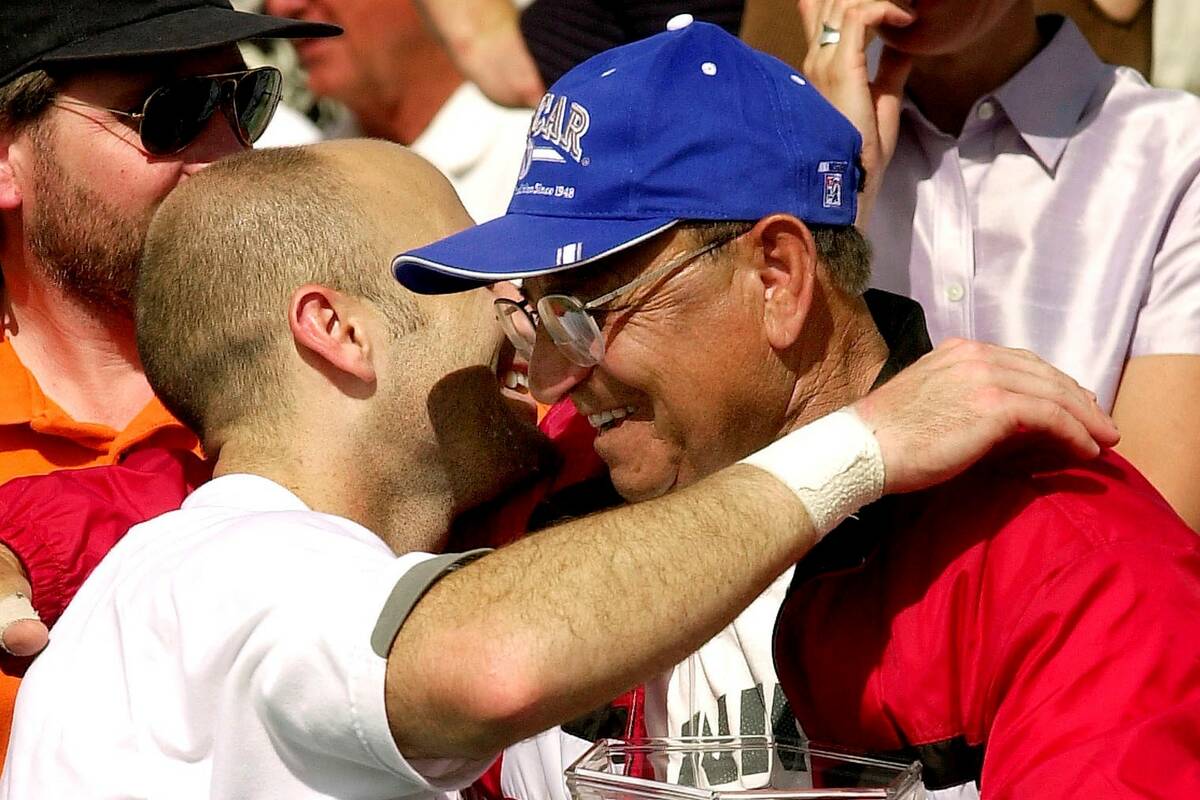 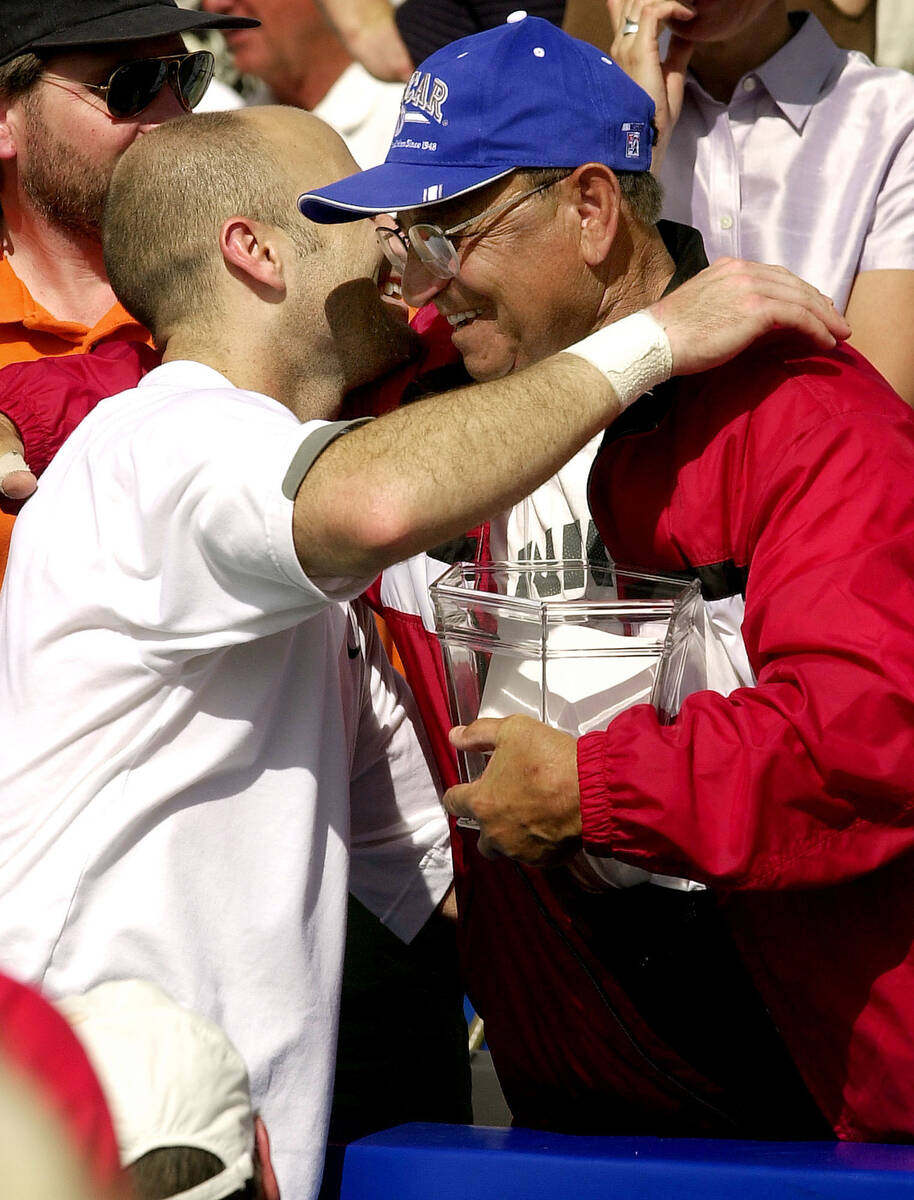 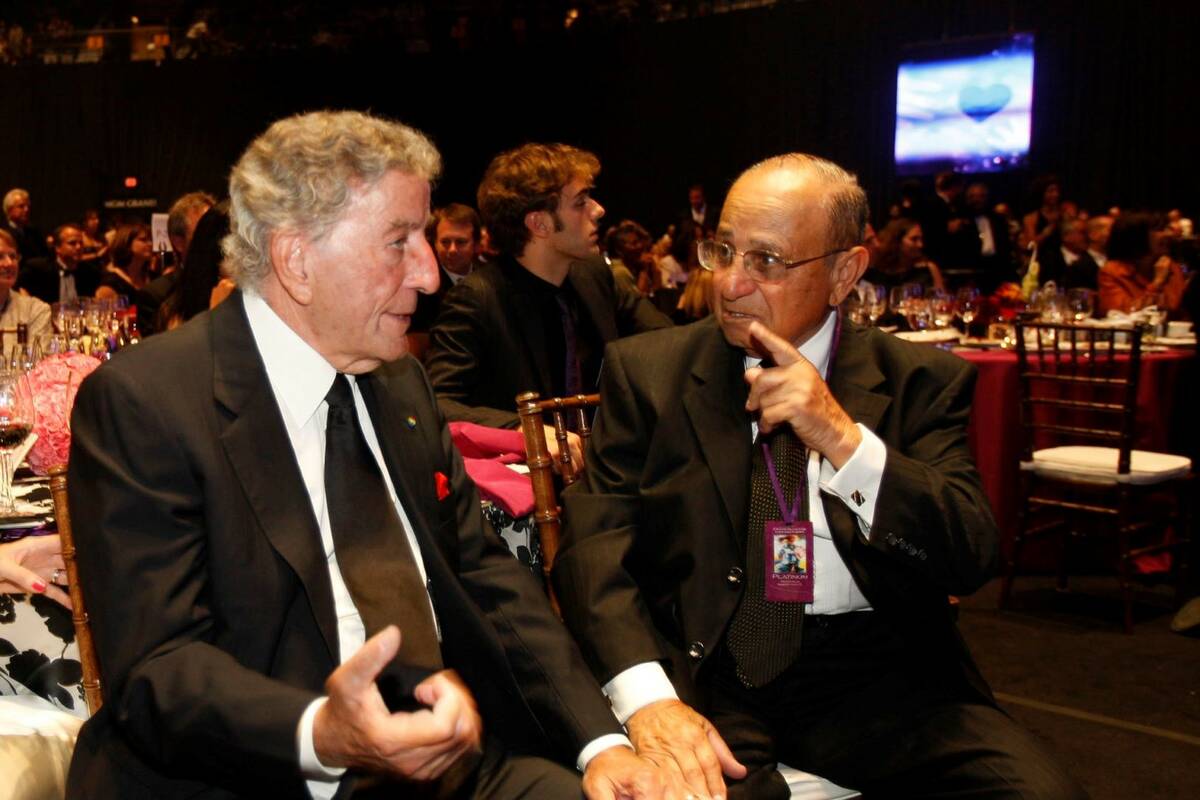 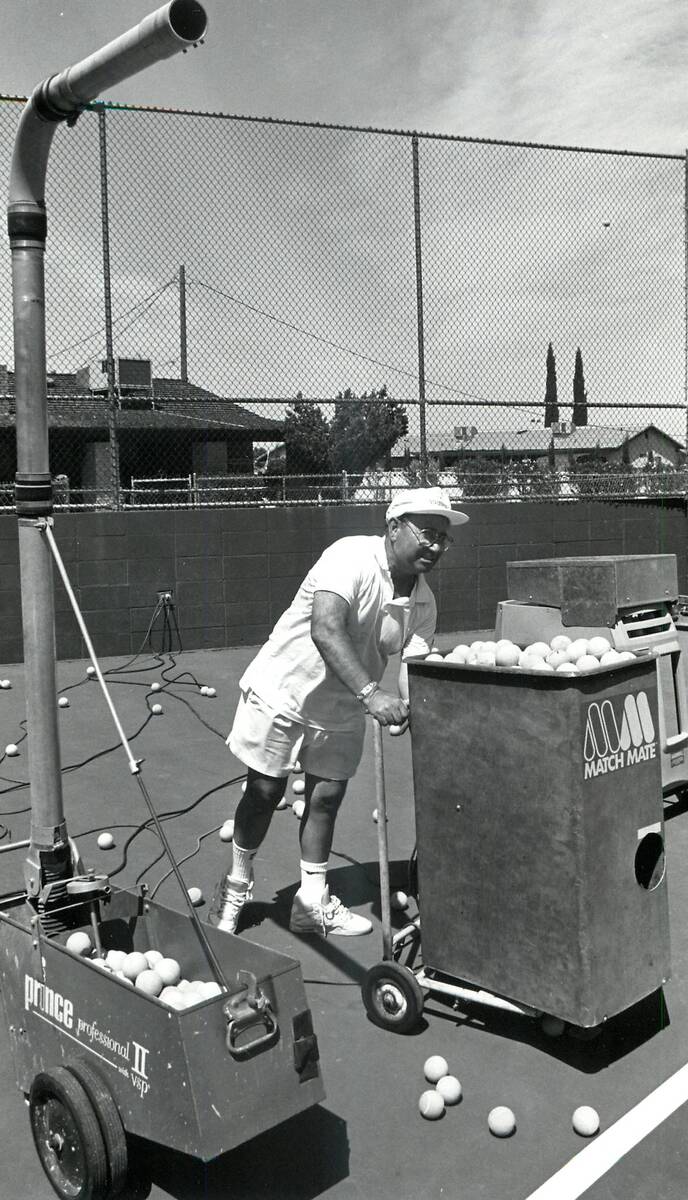 Mike Agassi, the father of Andre Agassi, loads and adjusts the ball machine used on the tennis court behind his Las Vegas house in July 1992. (Las Vegas Review-Journal) 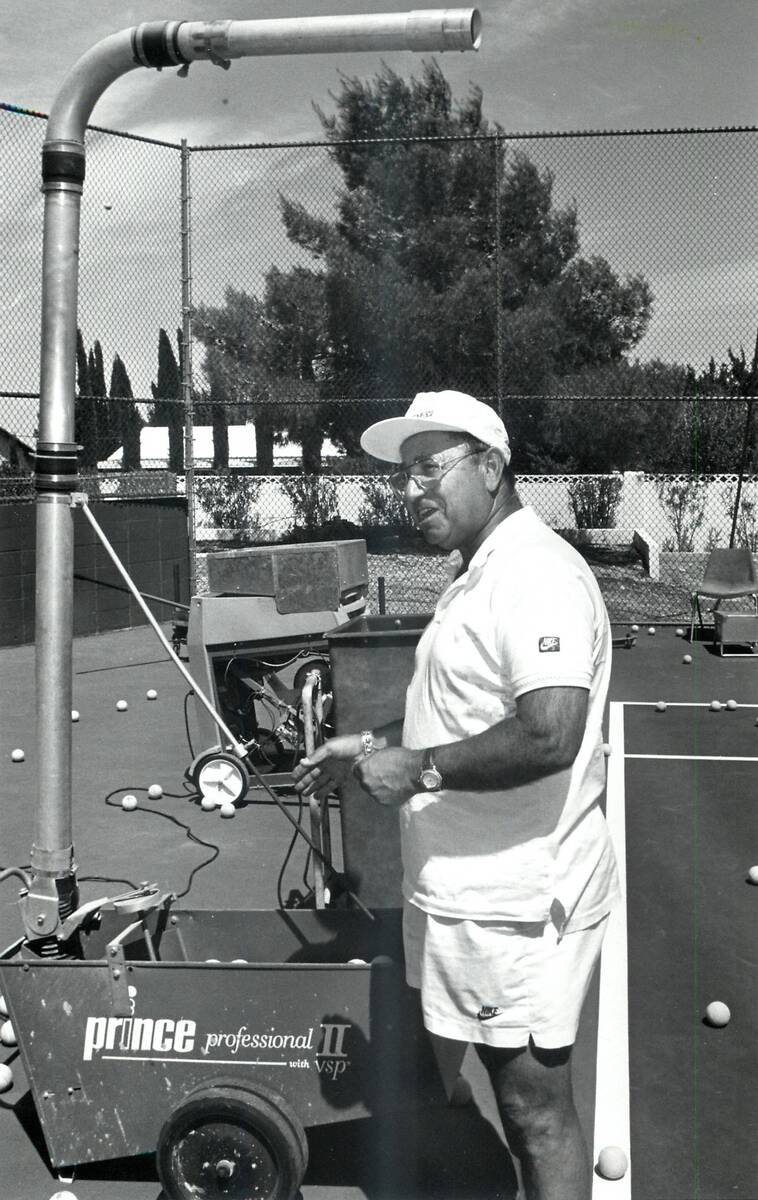 Mike Agassi, the father of Andre Agassi, loads and adjusts the ball machine used on the tennis court behind his Las Vegas house in July 1992. (Las Vegas Review-Journal)

Andre Agassi said plans for any memorial would be kept private. The tennis legend offered no further comment.

Born in Iran, Emmanuel Agassi was an Olympic boxer for his homeland in 1948 and 1952. After the Games, he followed his brother, Samuel, to Chicago. He changed his name to “Mike” upon immigrating. In 1963, he moved to Las Vegas to take a job at the Tropicana hotel-casino. Agassi quickly and took note of the hotel’s largely inactive tennis courts.

He was a novice player but had a passion for the game and offered to spruce up those courts and coach guests for free.

Agassi and his wife, Elizabeth, had four children: Rita, Phillip, Tami and Andre. Mike found young Andre especially talented and lorded over his career. He famously developed a tennis machine called “The Dragon,” which fired balls at Andre to teach him proper stroke technique.

Agassi swatted back 5,000 balls a day against that machine. He would become one of the game’s all-time great returners of service and an eight-time Grand Slam champion.

Mike Agassi was famous for his hard-driving tutelage and also his temper. In his transcendent memoir, “Open,” Andre revisited his first Grand Slam championship, beating Goran Ivanisevic in five sets at Wimbledon in 1992. His father’s first words to the new champ were, “You had no business losing that fourth set.”

In that book, and in interviews, the younger Agassi recalled his father setting up a challenge match in Vegas with NFL great and tennis buff Jim Brown when Andre was just age 9. Brown was at a club court, having set up a “money” match. His opponent never showed.

“My dad walked up to him, because he has no ability to feel embarrassment whatsoever, and says, ‘You know, Mr. Brown, I have someone who will play you for money.’ Brown says, ‘Who’s that?’ It was me,” Andre Agassi wrote in his memoir.

Brown relented, saying, “I only play for real money.” Mike Agassi responded, “We can play for a house if you want.” Brown said he didn’t need a house, but offered $10,000.

Mike Agassi went home to retrieve a strong box filled with cash, tips he’d made as a waiter and maitre d’. A manager stepped in to halt the proposed wager, advising Brown that Agassi was no typical 9-year-old player. Brown settled on a $500 bet, and Andre Agassi “took care of business,” as he said, winning the match.

Mike Agassi once said to Italian newspaper La Repubblica, later reprinted by Tennis World, “it’s better to have a father beside his son in the sport than his coach.” He was inducted into the Nevada Tennis Hall of Fame in 2008.

“Starting from an adverse childhood in Iran Mike Agassi literally fought his way to America to raise four extraordinary children, all elite tennis players and Andre who went on to change the game of tennis, and philanthropy,” U.S. Tennis Association of Nevada director Ryan Wolfington said in a statement. “Mike Agassi’s efforts as a coach and deeply passionate tennis advocate inspired countless lives. His most cherished trait however is his big heart to help those in need, something all of his children have carried on in remarkable ways.”

Wolfington went on to say that Agassi “was one of the toughest people I’ve ever met with the biggest heart. He and his loving wife Betty raised four extraordinary children, elite athletes and humanitarians, and Mike had a big hand in his son Andre Agassi’s career that revolutionized the game of tennis and philanthropy.”

The elder Agassi became a fixture in the Las Vegas hotel-casino community, as an ambassador and maitre d’ at the Trop, the original MGM Grand (later Bally’s), Landmark and the current MGM Grand. He became especially close to resort magnate Kirk Kerkorian, with whom he shared Armenian heritage.

“Kirk always said that Mike was like a brother,” said longtime Las Vegas resort executive Gene Kilroy, who knew Agassi for 30 years. “Mike was a legend in the casino industry.”

Kerkorian hired Agassi at the old MGM Grand. Agassi was on staff when fire erupted at the hotel in November 1980, killing 85 people, temporarily closing the hotel and putting employees out of work. Kerkorian made sure the Agassi family did not suffer financially.