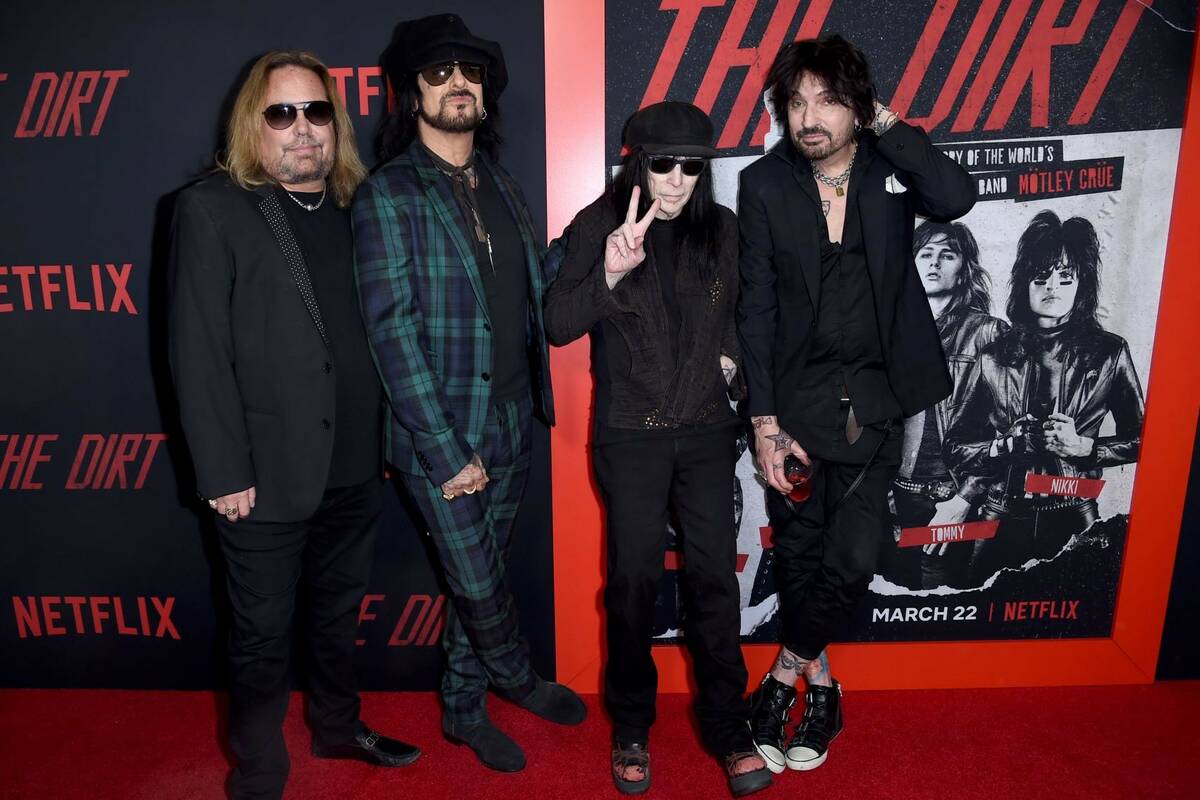 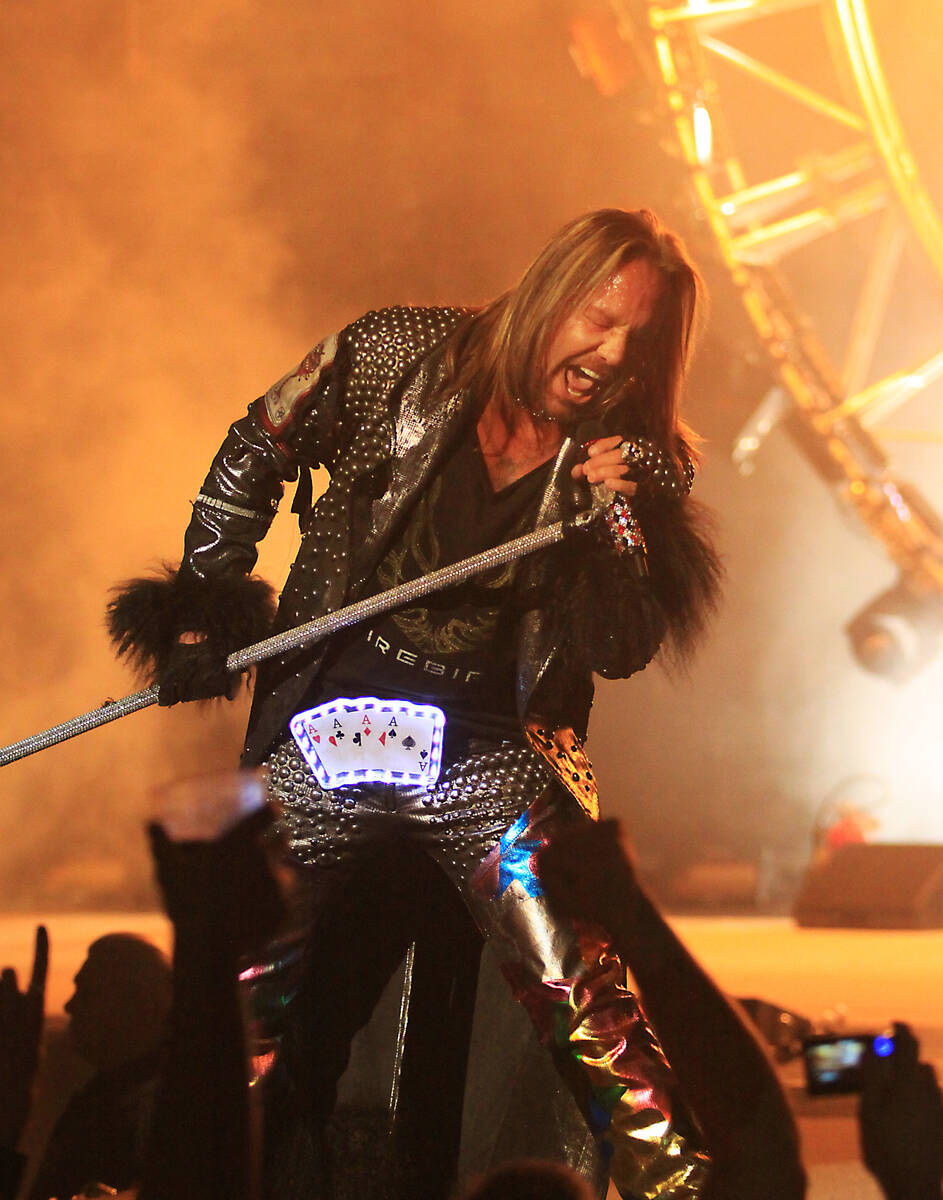 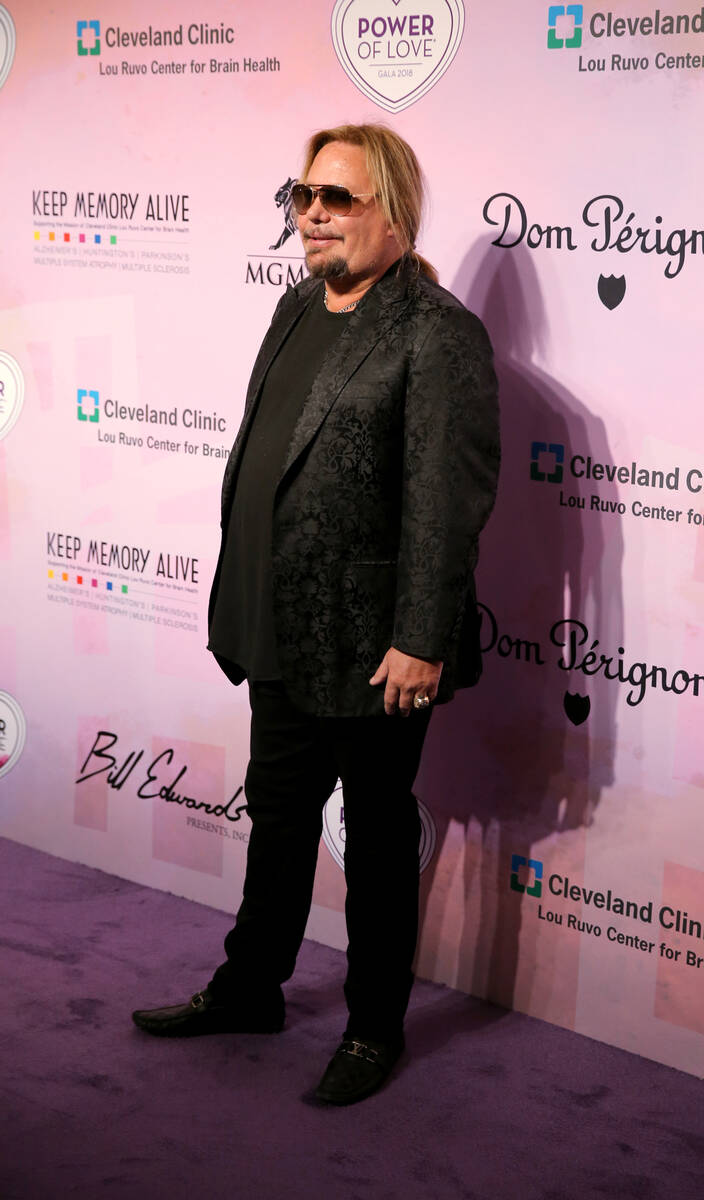 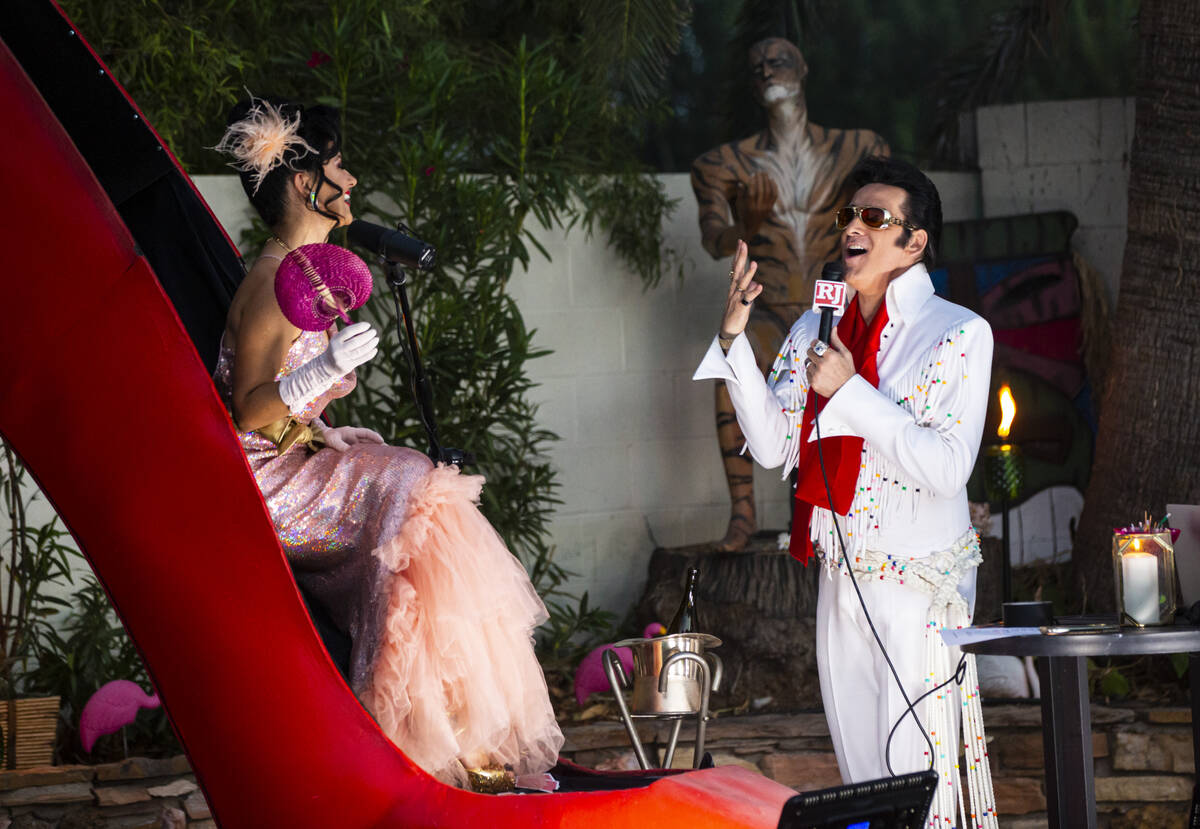 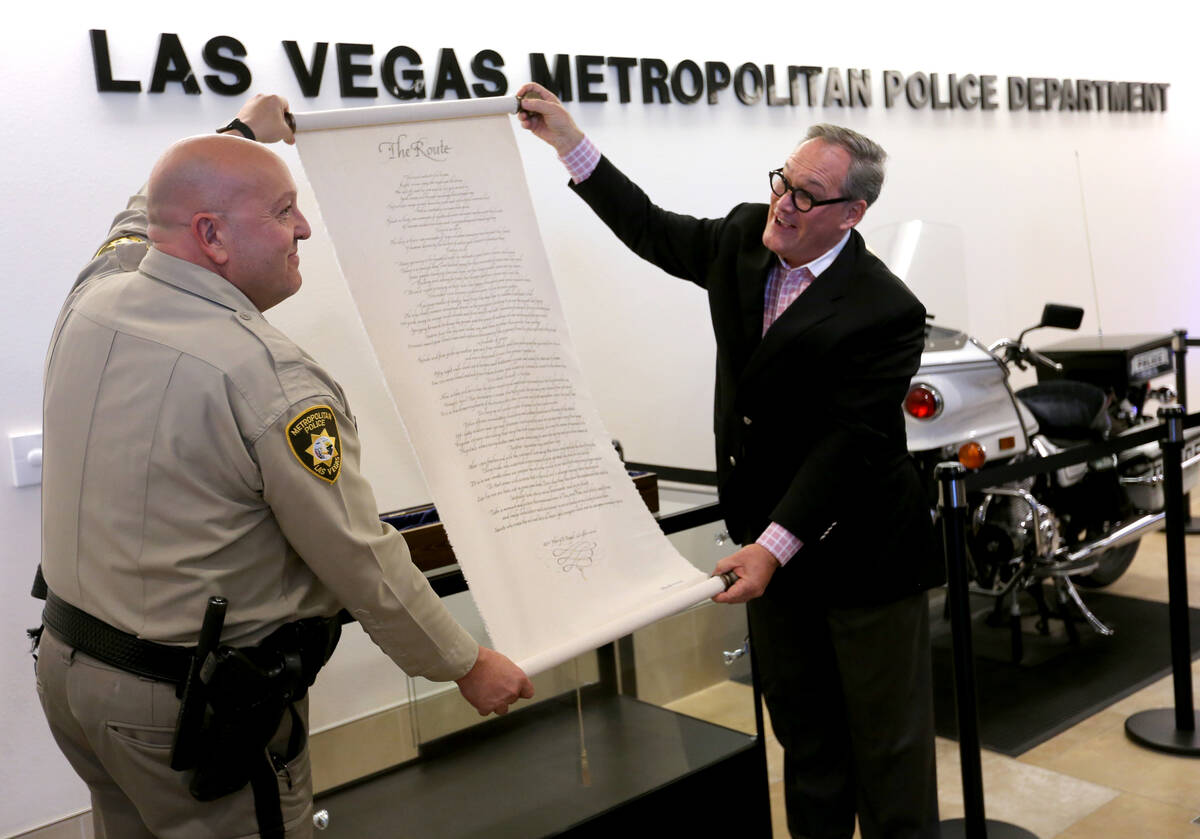 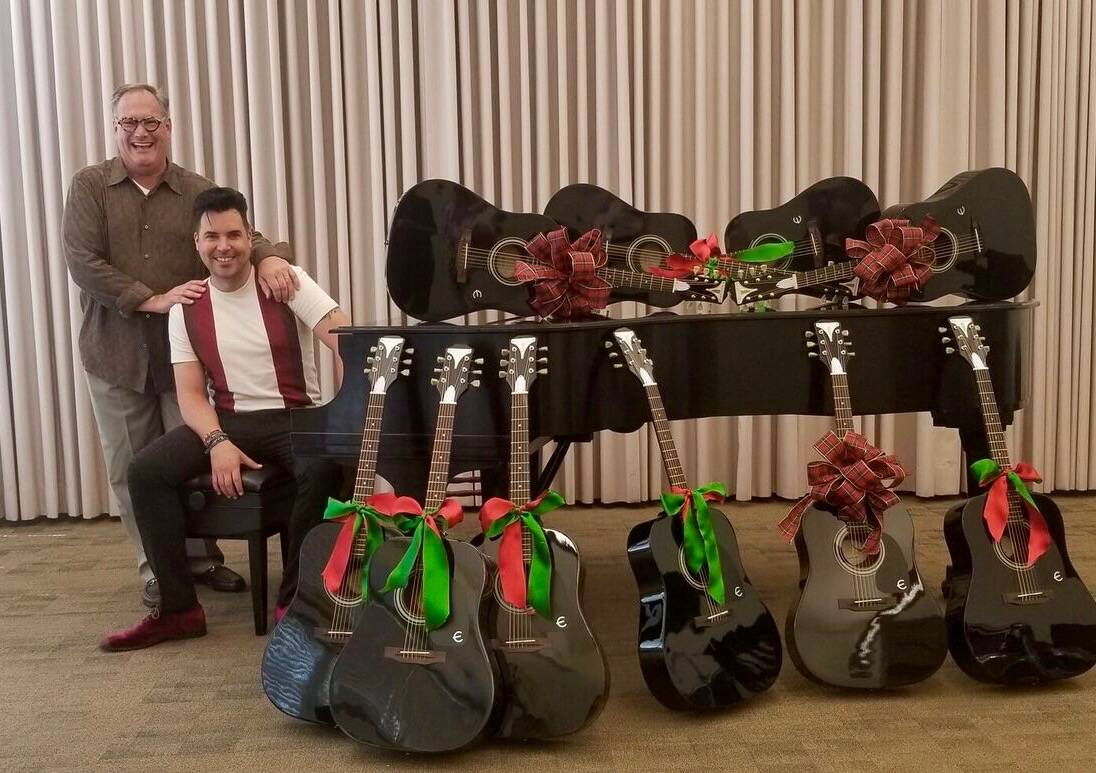 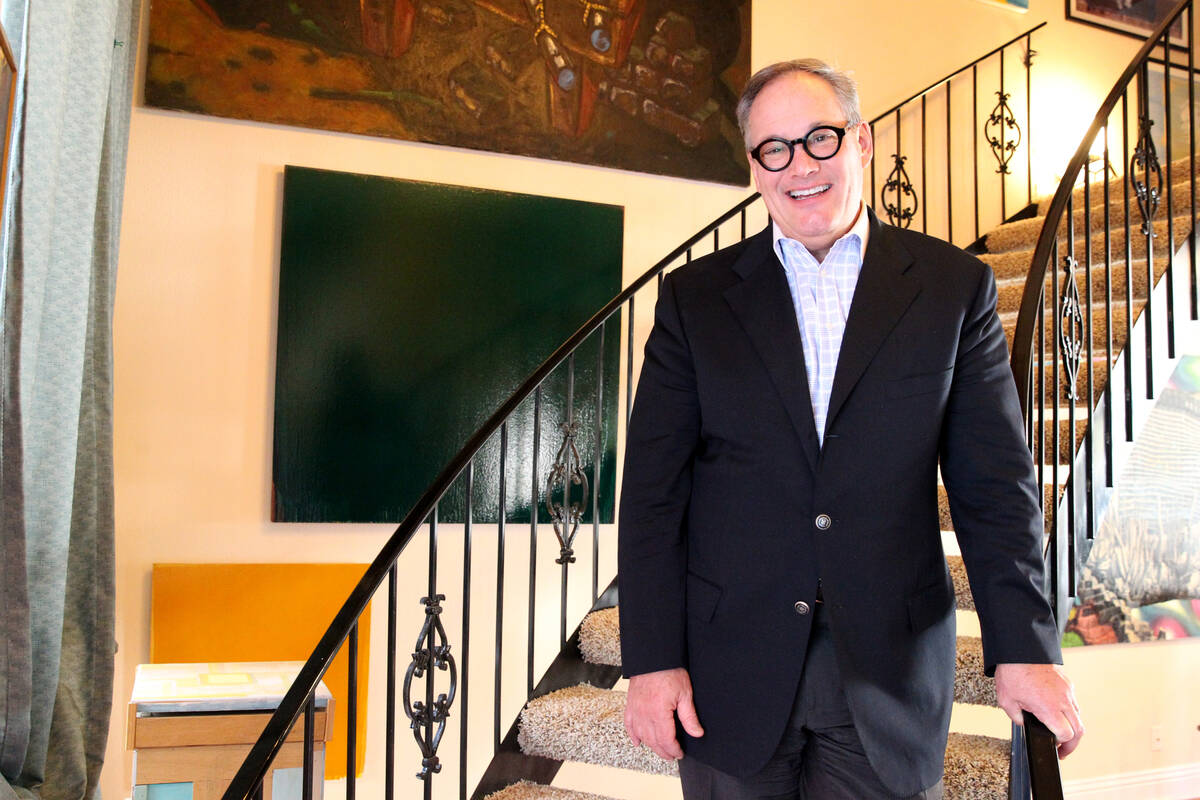 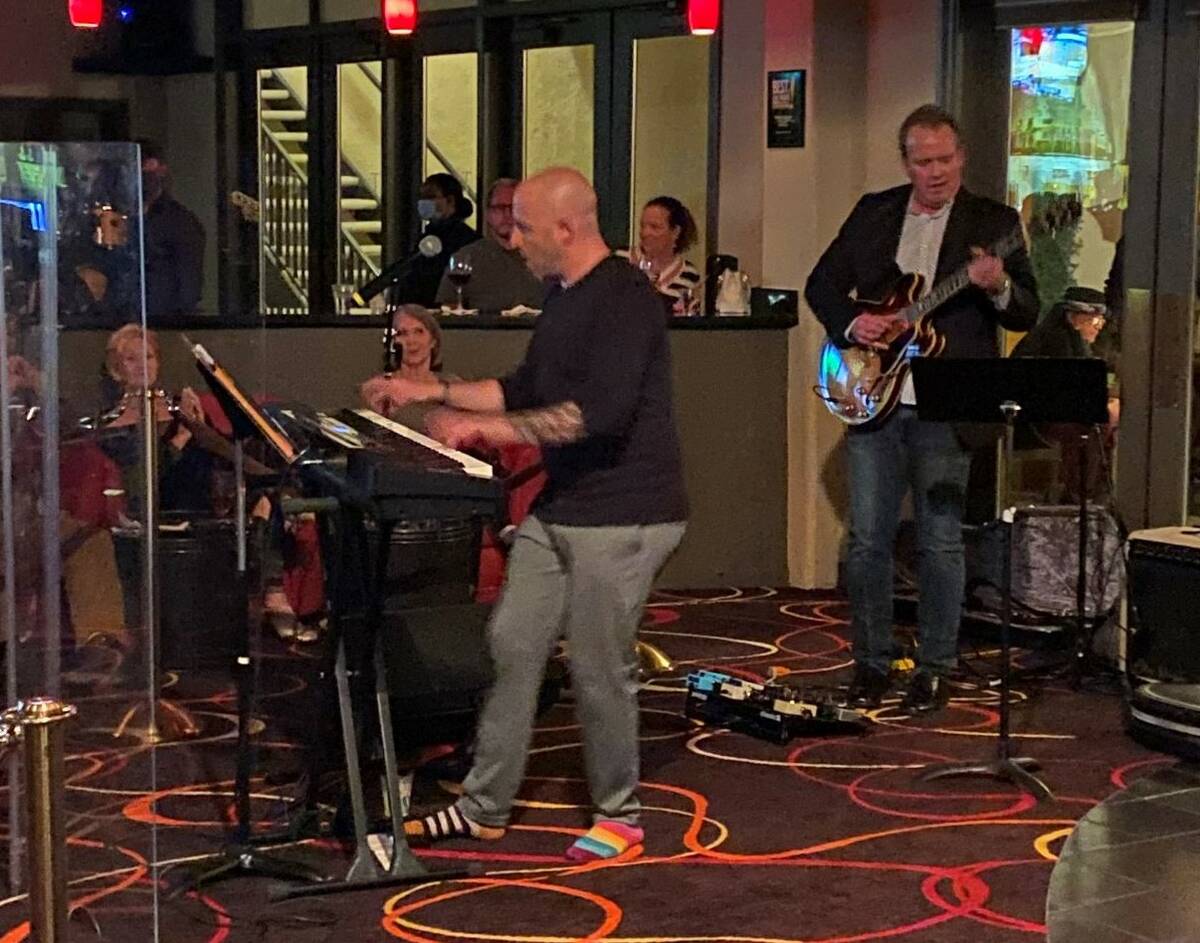 This is a rare raking-of-the-scene post. Today we invoke a motley crew, an acclaimed actor headlining with a favorite chanteuse, Knight who is a Pip and a prominent art collector ready to say, “See ya!”

Motley Crue is heading up the restarted Stadium Tour at Allegiant Stadium, which we have on good authority will close at Allegiant Stadium on Sept. 9. Def Leppard, Poison and Joan Jett and The Blackhearts are back in the fold, too. The tour opens at SunTrust Park in Atlanta on June 16.

The Stadium Tour was shut down in May 2020 and had not initially booked at Allegiant Stadium. But the availability of Allegiant, and the bands’ collective drawing power, made the tour a natural for Las Vegas.

All the acts have headlined here either in residency (the Crue and Def Leppard) or in one-offs. Also, Motley Crue frontman Vince Neil lived for years in Vegas before moving back to his ranch in Nashville during COVID. Neil even wore a cowboy hat in his Merry Christmas message on social media, which is a look that kills.

Melody Sweets is going big-fly (pun is intended) in her return to the stage. The former Green Fairy in “Absinthe” is Jeff Goldblum and the Mildred Snitzer Orchestra’s special guest for a night of jazz on March 11 at Virgin Hotels’ 24 Oxford. Tickets are on sale 10 a.m. Wednesday at virginhotelslv.com.

Goldblum’s team brings in guest singers from host cities. His team scouted Las Vegas, and heard that the popular burlesque performer would be ideal for the jazz presentation. They then e-mailed Sweets, who hadn’t expected to receive such an offer.

This all happened fast, about a week ago. Now Sweets is performing “a few” jazz numbers, sampling from Goldblum’s two album releases.

“I’m really ready to be back on stage,” said Sweets, who left “Absinthe” in October 2017. “It’s been a gazillion years.” (Once more, pun intended.)

Sweets has been developing a solo show with the creatively adept MsTickle. They are still looking for the right venue and right partner. Until then, Sweets hopes to (Jurassic) park it with Goldblum’s band.

When I heard that Bubba Knight of the Pips was coming out of retirement to perform alongside Kelly Clinton-Holmes and Elisa Fiorillo, I thought he might come out and run through “Midnight Train to Georgia,” pose for some selfies and call it a night.

Knight and his co-stars lit up The Nevada Room for a Valentine’s Day performance that was truly inspirational. I was inspired to take dance lessons, for instance.

For the uninitiated, Knight is Gladys Knight’s brother and an original member of the Pips who has performed professionally since 1952. Knight was 10 then. He’s 79 now, but acting like he’s 10.

Knight performed as a Prince tribute artist known as “Purple.” He donned a mass of fake hair for a spin on the piano as “Loose-Wig Von Beethoven.” He sampled Blake Shelton as a country music award winner. He slipped into an Ike Turner outfit, with a goatee that didn’t quite stick, while Clinton-Holmes as Tina Turner roared through “Proud Mary.”

And at the end, Knight introduced his sister Brenda, also a founding member of the Pips, seated near the stage. As Bubba said, “She is the brains of the family because she didn’t go out on tour with us! She got an education!”

One of his many great lines, and moments, in a show that lasted about 2.5 hours.

The night closed as Knight brought up former Miss Black America and Atlantic Starr singer Rachel Oliver-Cobbin for the original “Thank You For the Love” and a closing medley of “I Heard it Through the Grapevine” and “Midnight Train to Georgia.” That “whoo-whoo” whistle callout was music to our ears. All aboard the Bubba train.

Column fave, and I mean for a long spell, Patrick Duffy is leaving Las Vegas for his former hometown of Chicago. This happens in May.

After moving to town in 2001, Duffy served as president of Las Vegas Art Museum, an original Smith Center board member, chair of UNLV’s galleries board, curator of the art program at Life is Beautiful and finally, from 2018 through this past January, CEO of Nevada School of the Arts.

The prominent art collector built the Goodman Duffy Collection, with his late partner Wally Goodman, of works by international artists. He and his husband, Luis Velazquez happened to be married on Oct. 1, 2017.

“We just say, ‘Our anniversary is in early October,’ ” Duffy says.

But after more than 20 years, Duffy is closing the book on the Vegas chapter of his life.

As he says, “I need a bigger art pool. I can no longer exist in the puddle.” His work here is done.

Don't mean to "crash your party" @lukebryan, but I can't give you the credit here, credit goes to Nevadans & visitors who got vaccinated & boosted to protect one another from COVID.

We can't wait for you to "play it again" at @ResortsWorldLV https://t.co/mDcQAznfXf

Gov. Steve Sisolak retweeted my post from Luke Bryan’s opening night. Bryan had joked during the show that the governor dropped the statewide mask mandate because of Bryan’s residency. “Don’t mean to ‘crash your party’ @lukebryan, but I can’t give you the credit here, credit goes to Nevadans & visitors who got vaccinated & boosted to protect one another from COVID. We can’t wait for you to ‘play it again’ @ResortsWorldLV.” Nothing back from Bryan. I think he was at the tables anyway.

Former “Million Dollar Quartet” co-star Martin Kaye is ducking back into VegasVille during a break from the cruise lines. Kaye, who portrayed Jerry Lee Lewis in the Strip musical, is headlining a rock ‘n’ roll revival at 8 p.m. (doors at 7 p.m.) Sunday at The Space. Tickets are $30. Worth it. This guy with mismatched footwear can rock your socks off.