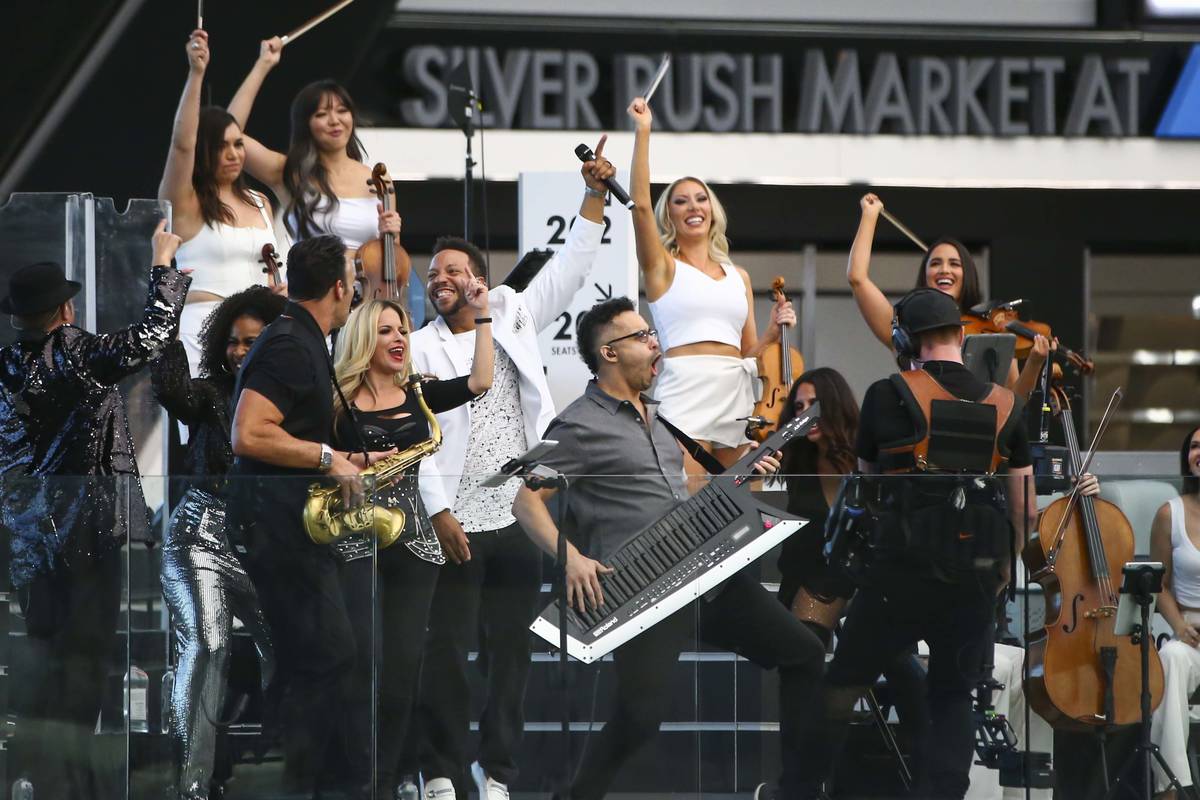 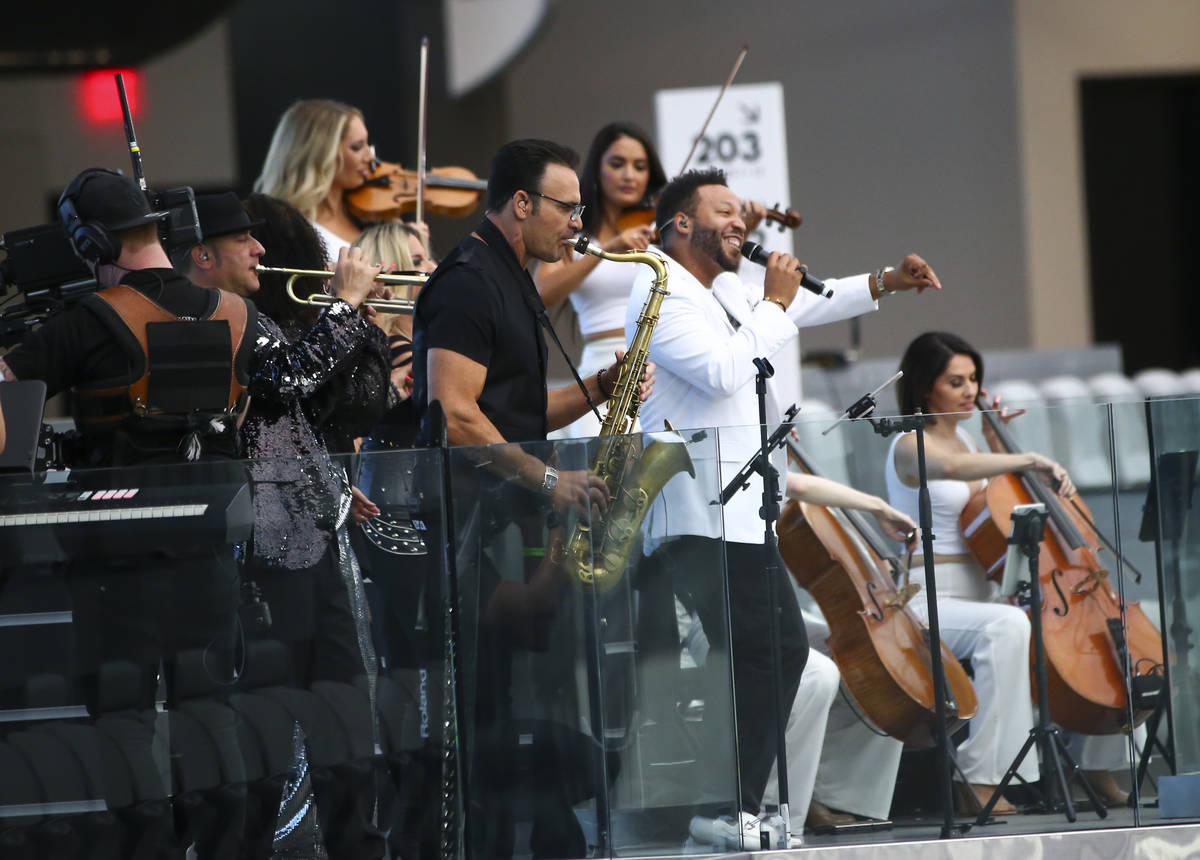 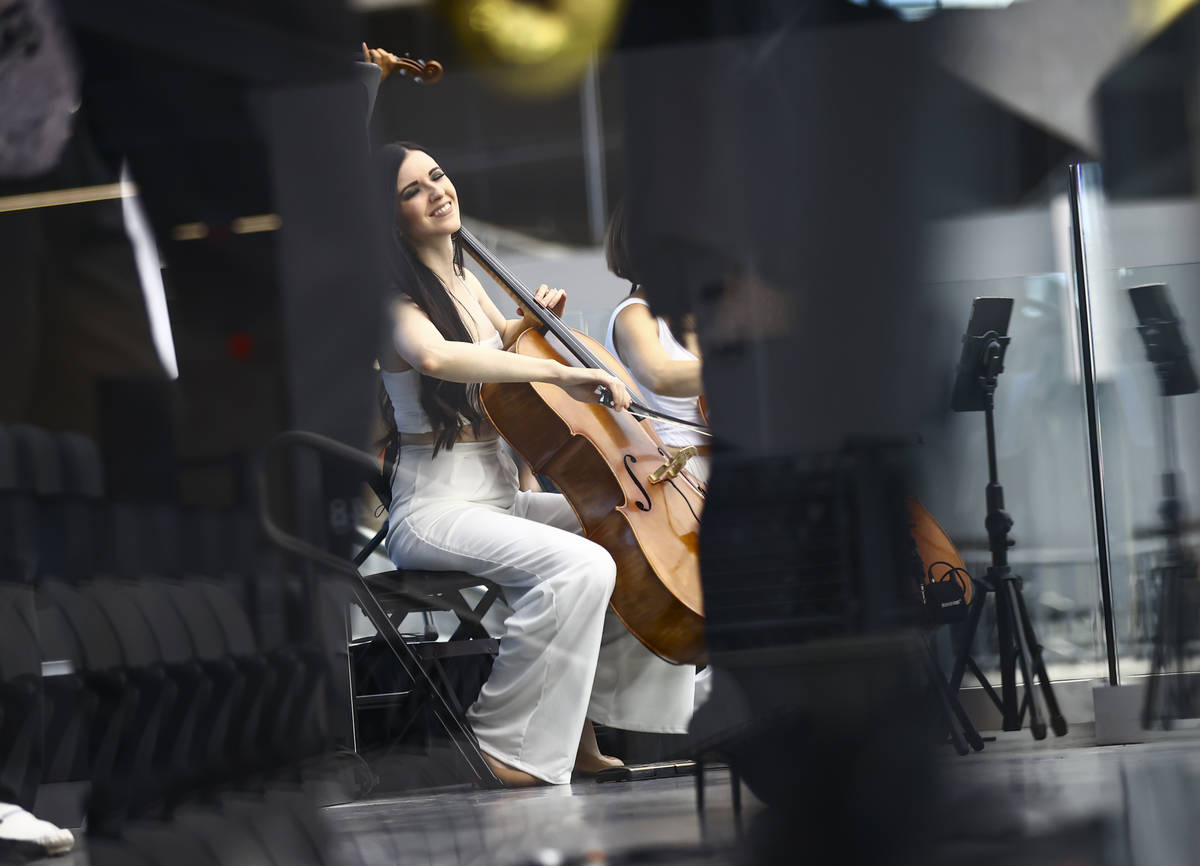 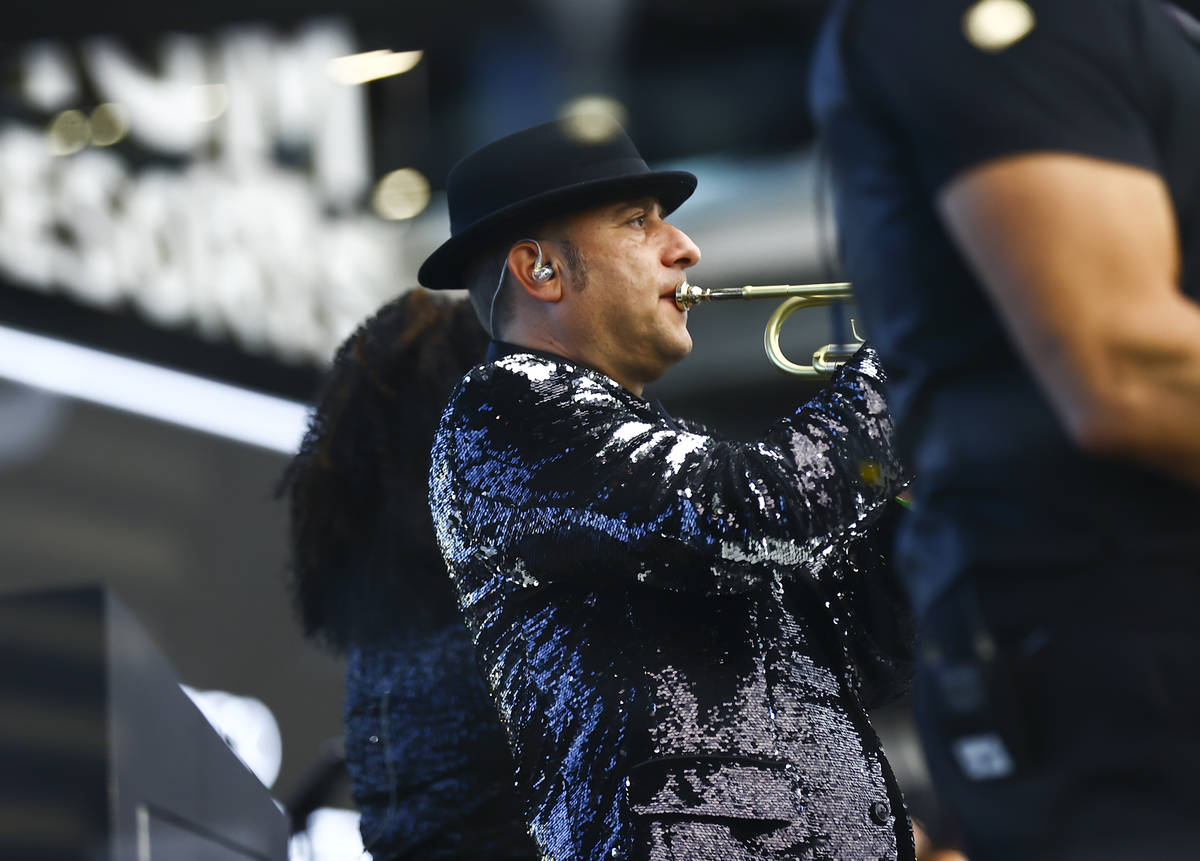 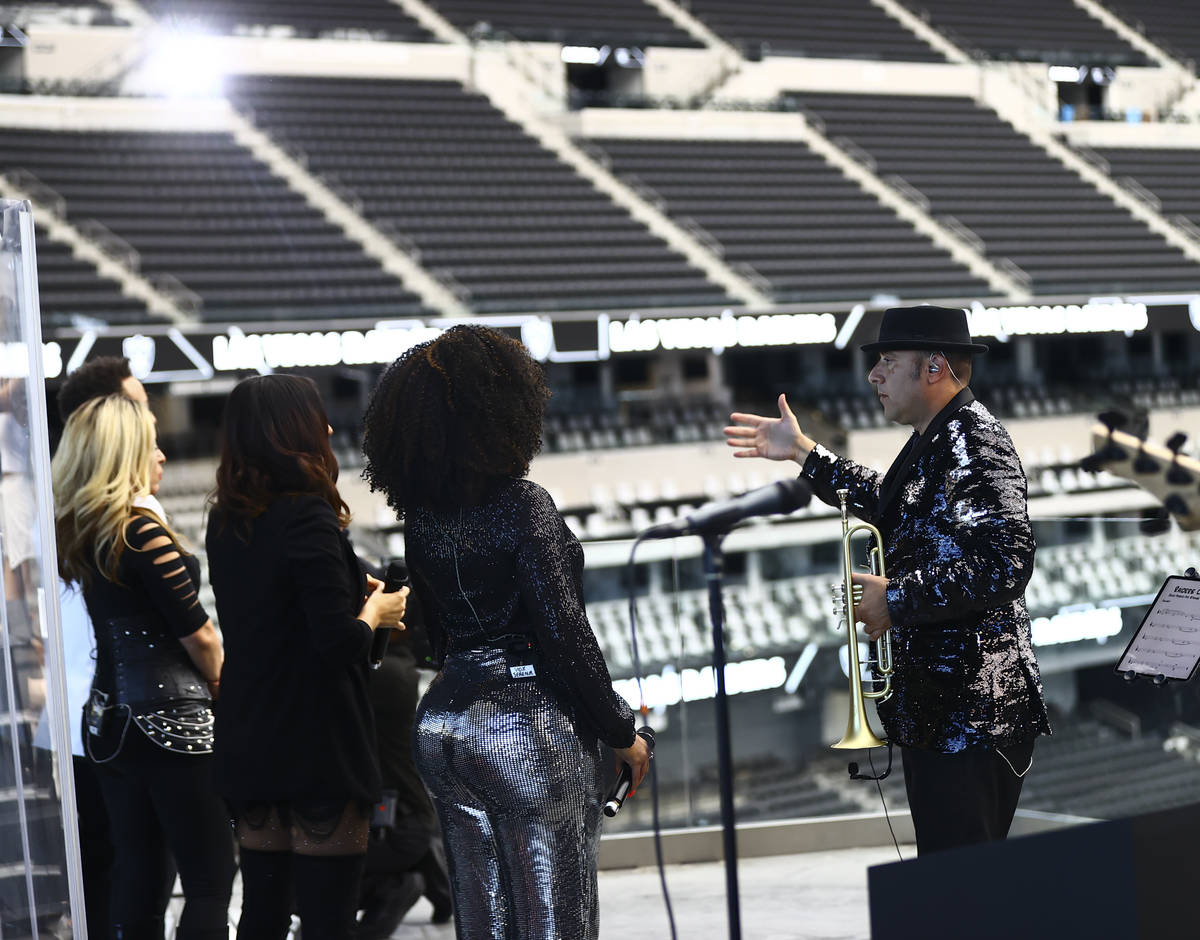 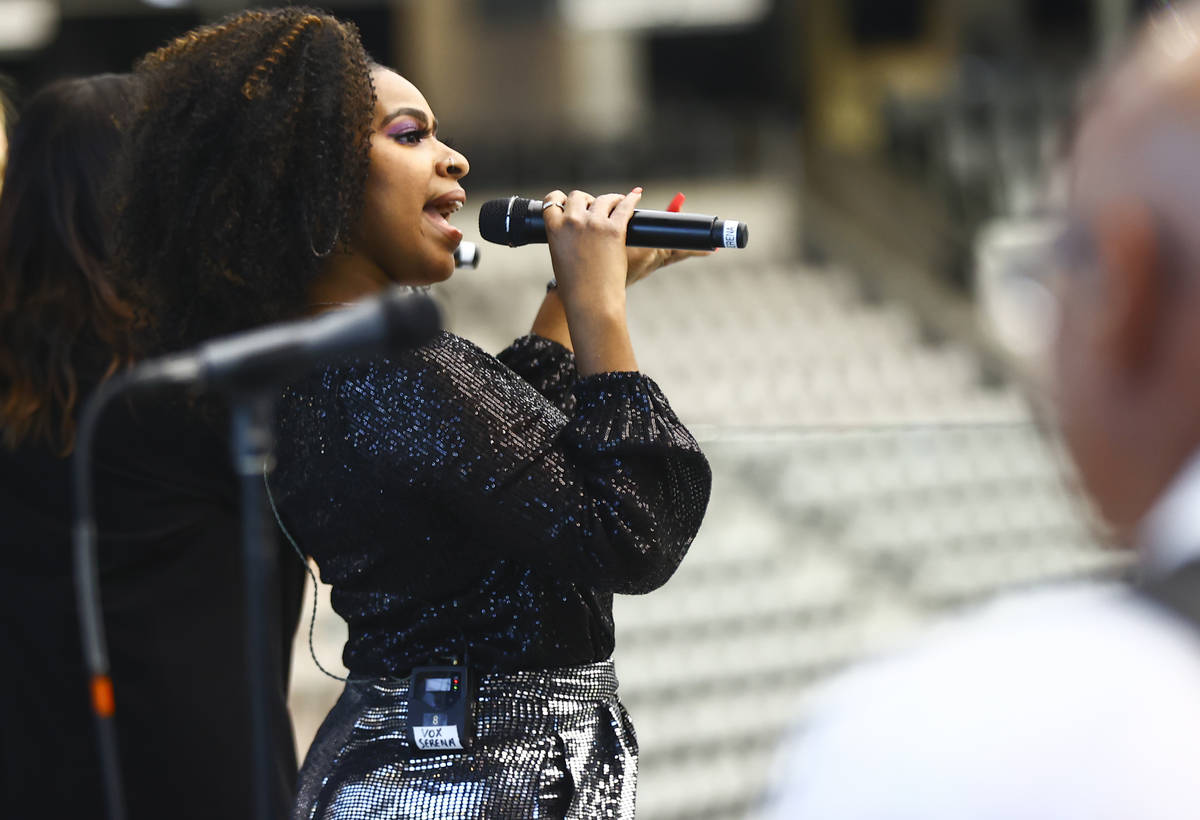 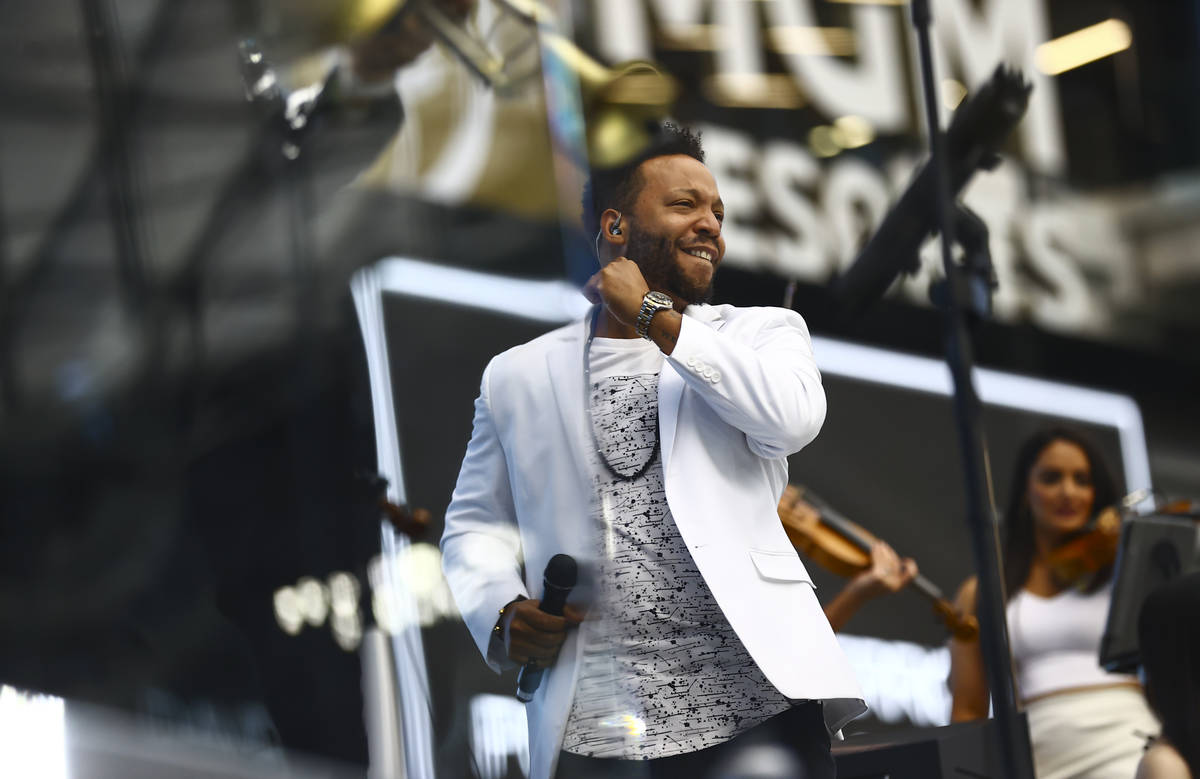 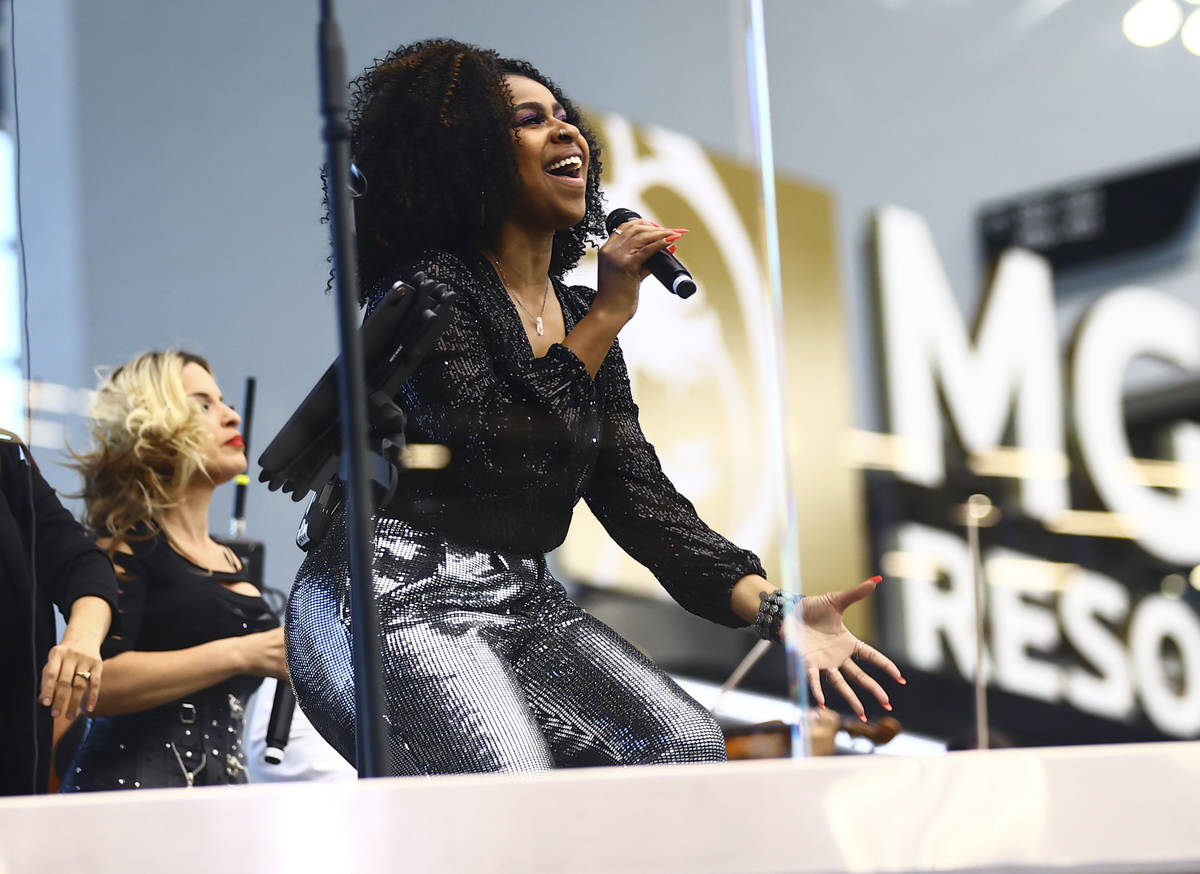 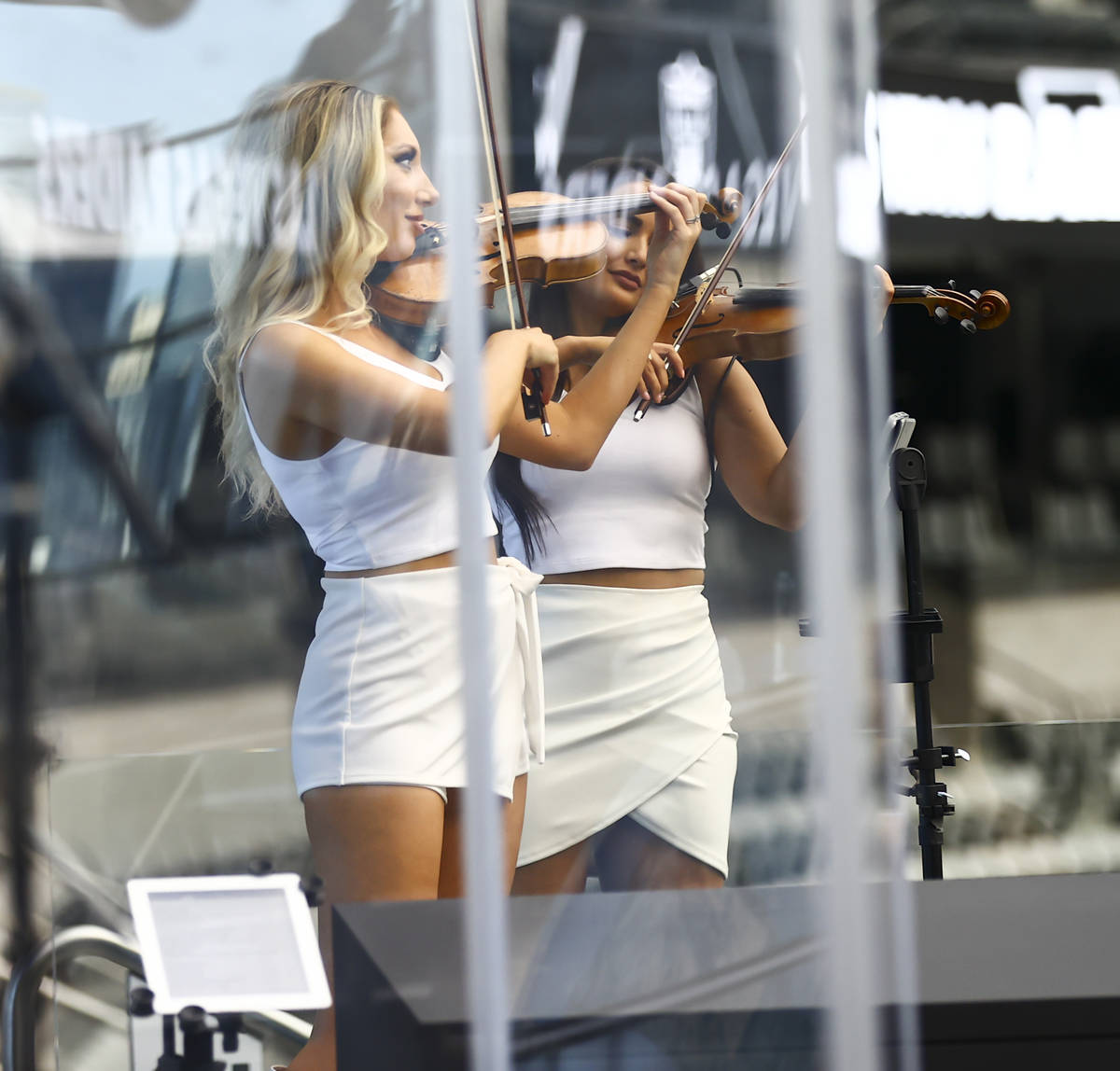 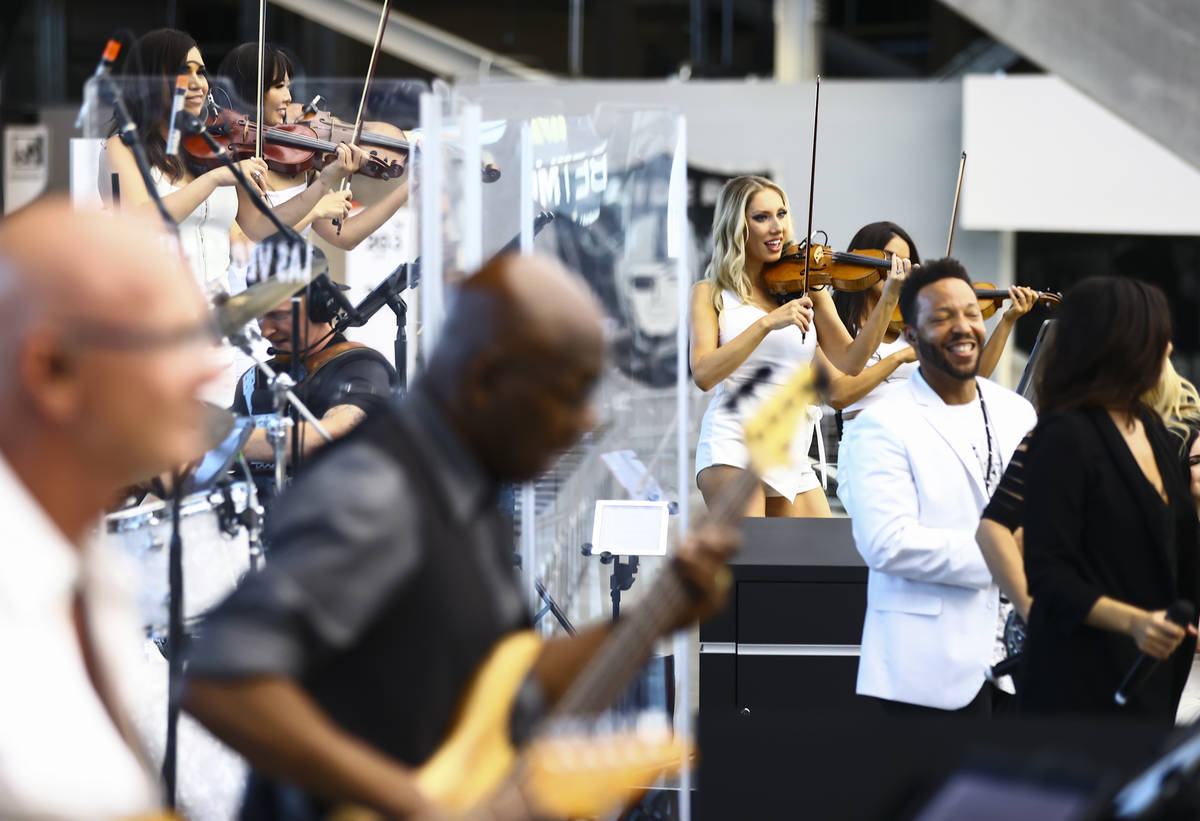 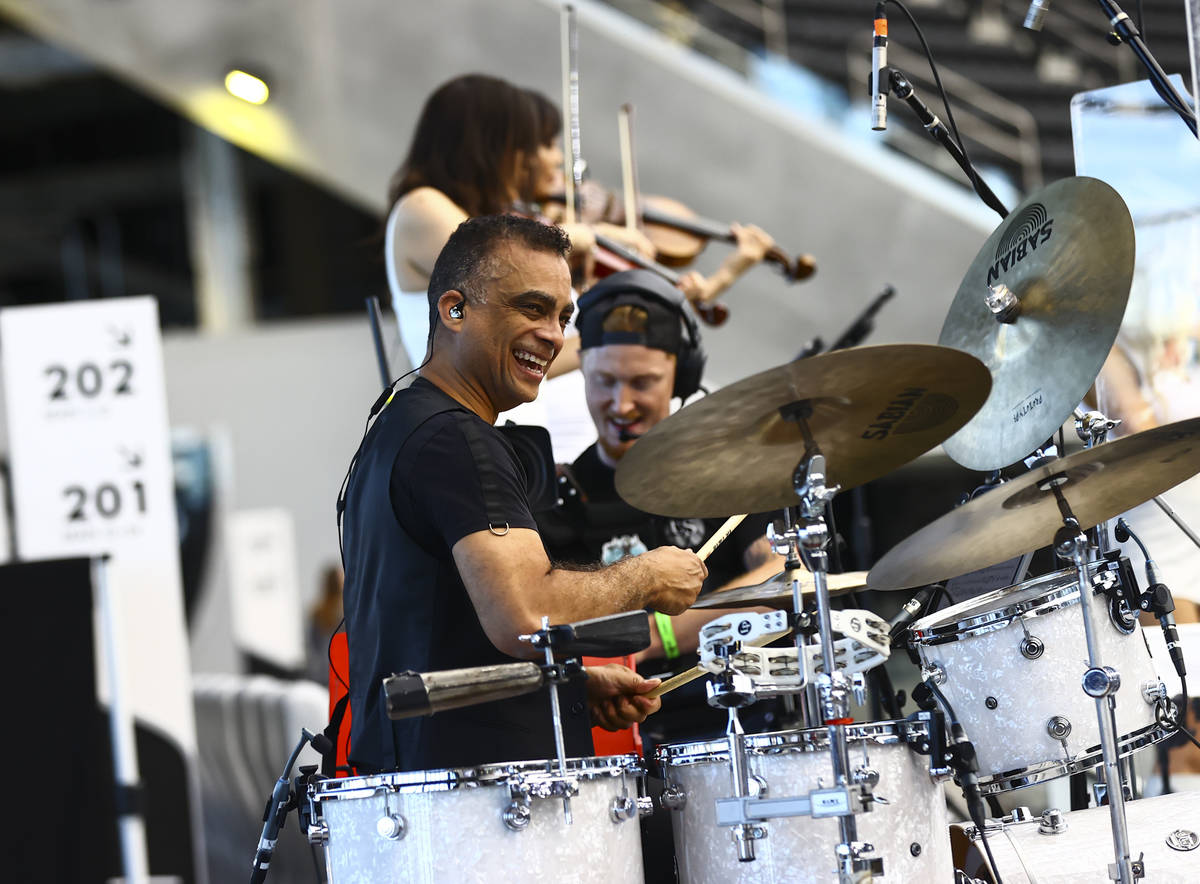 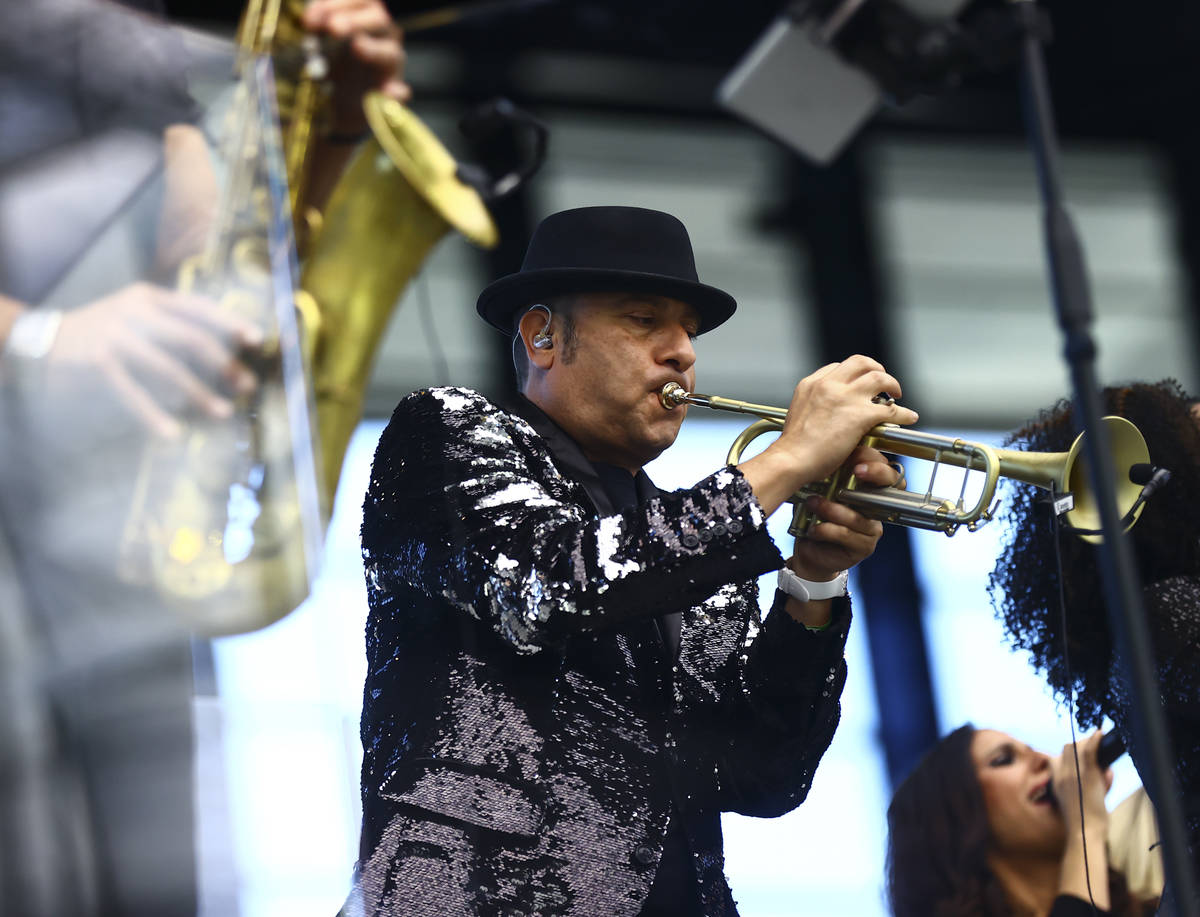 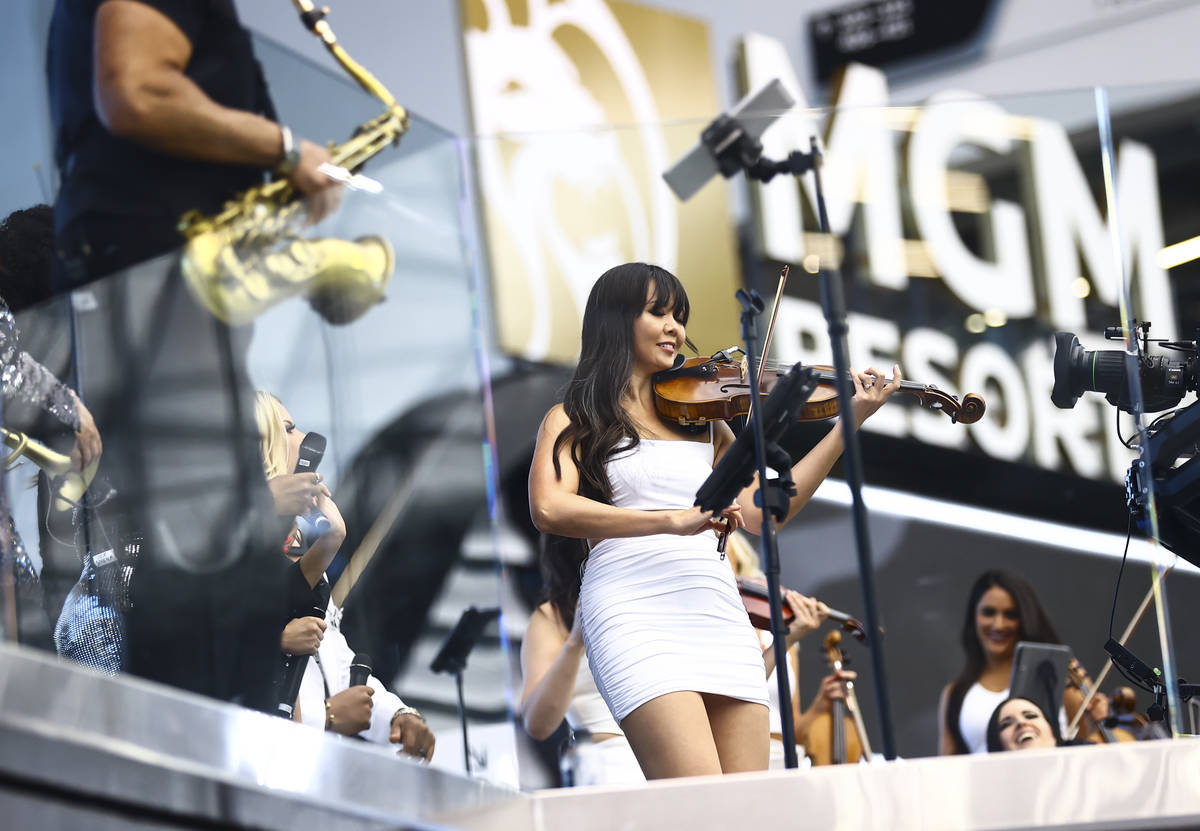 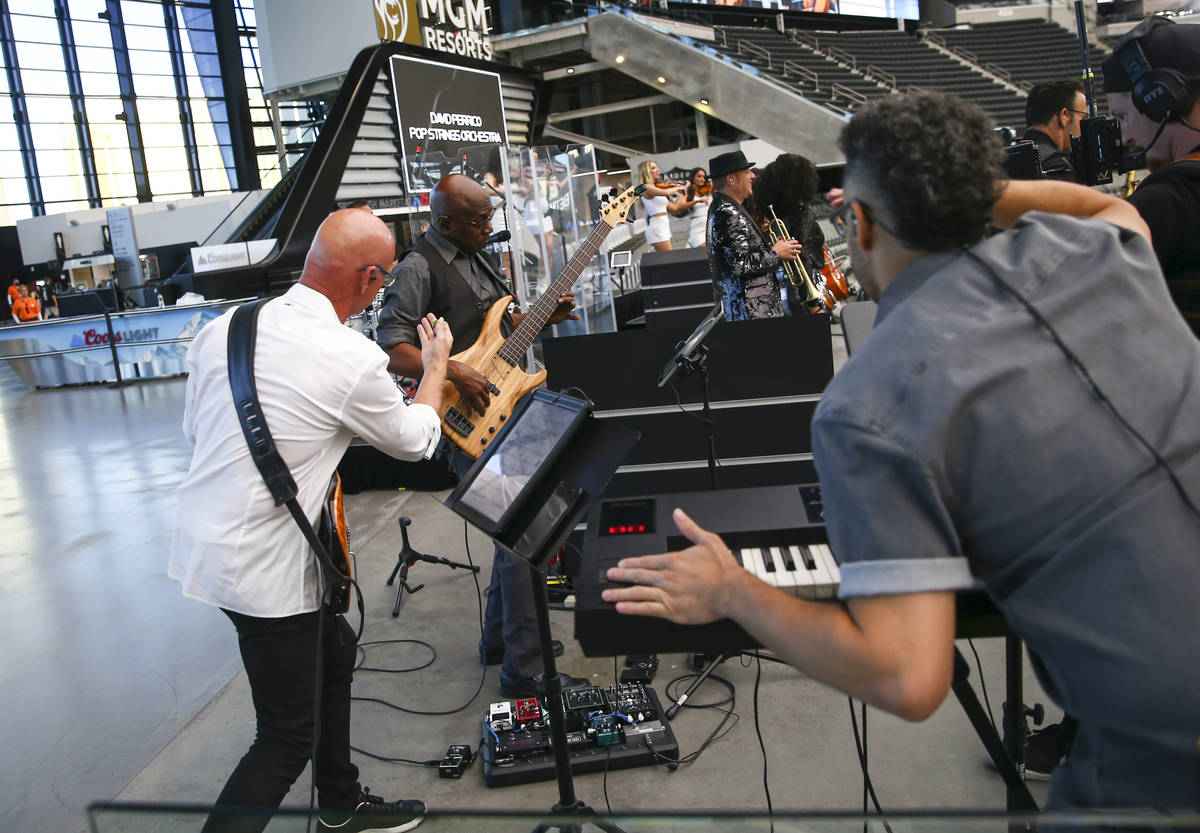 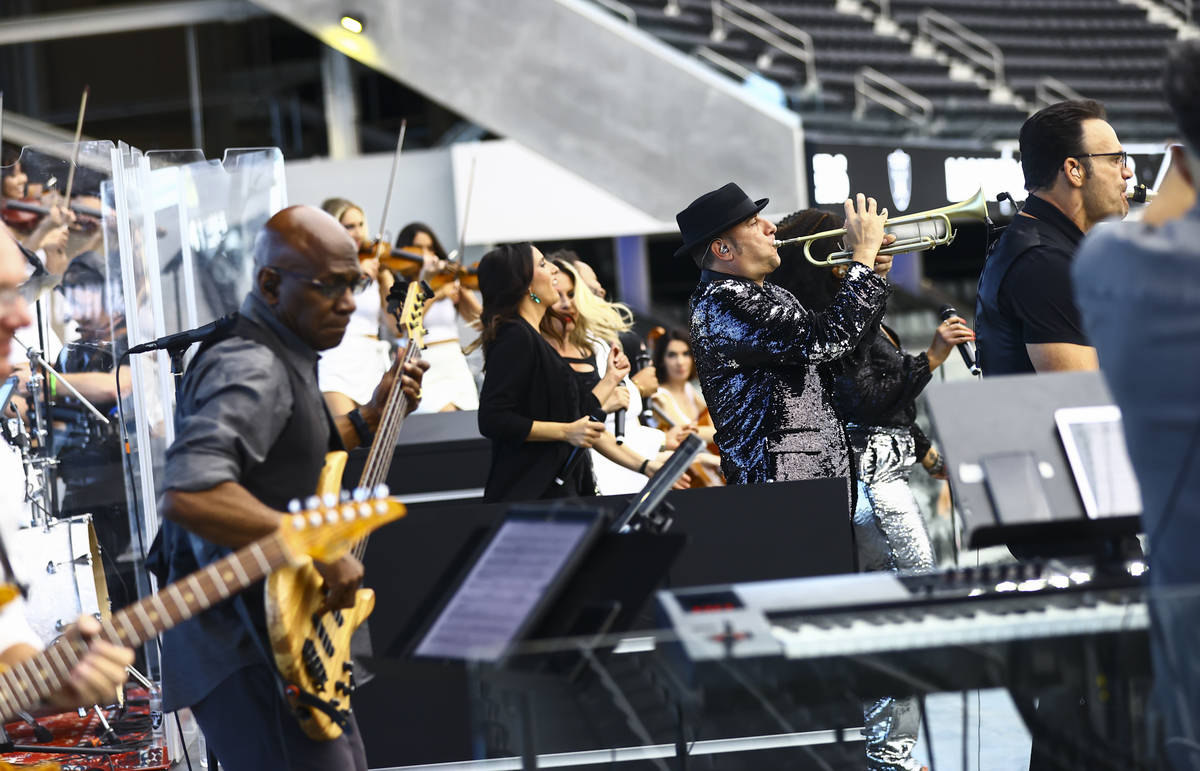 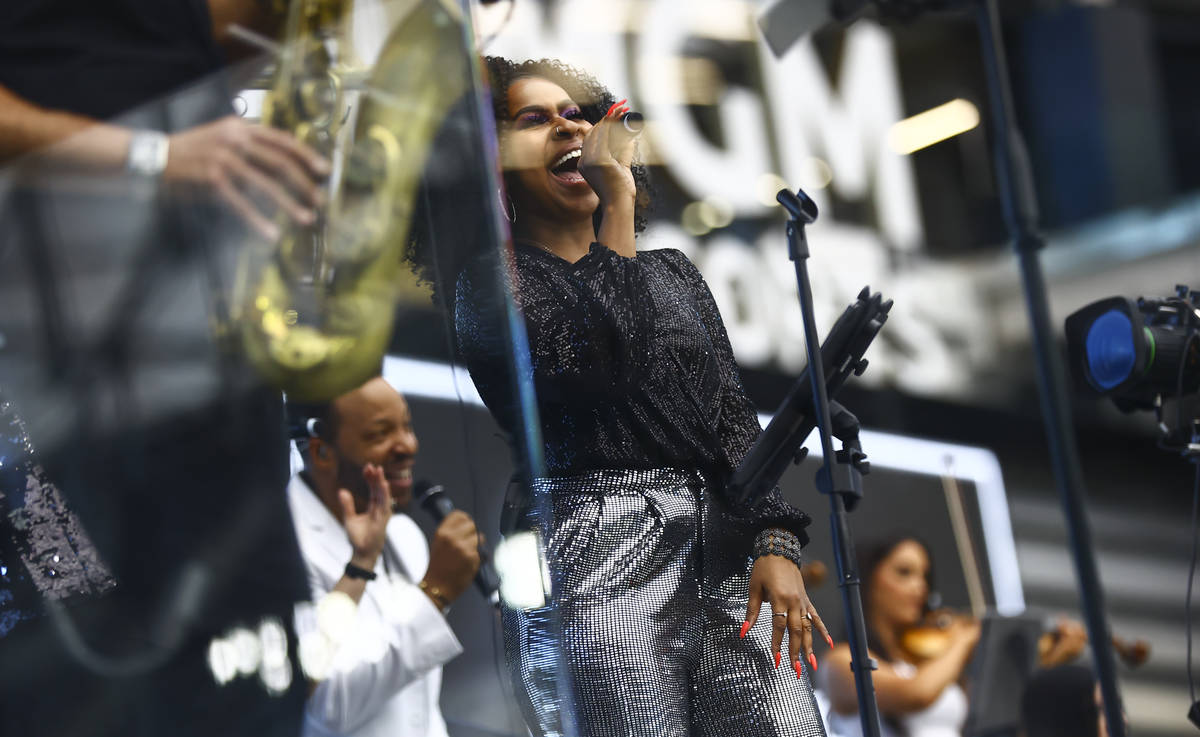 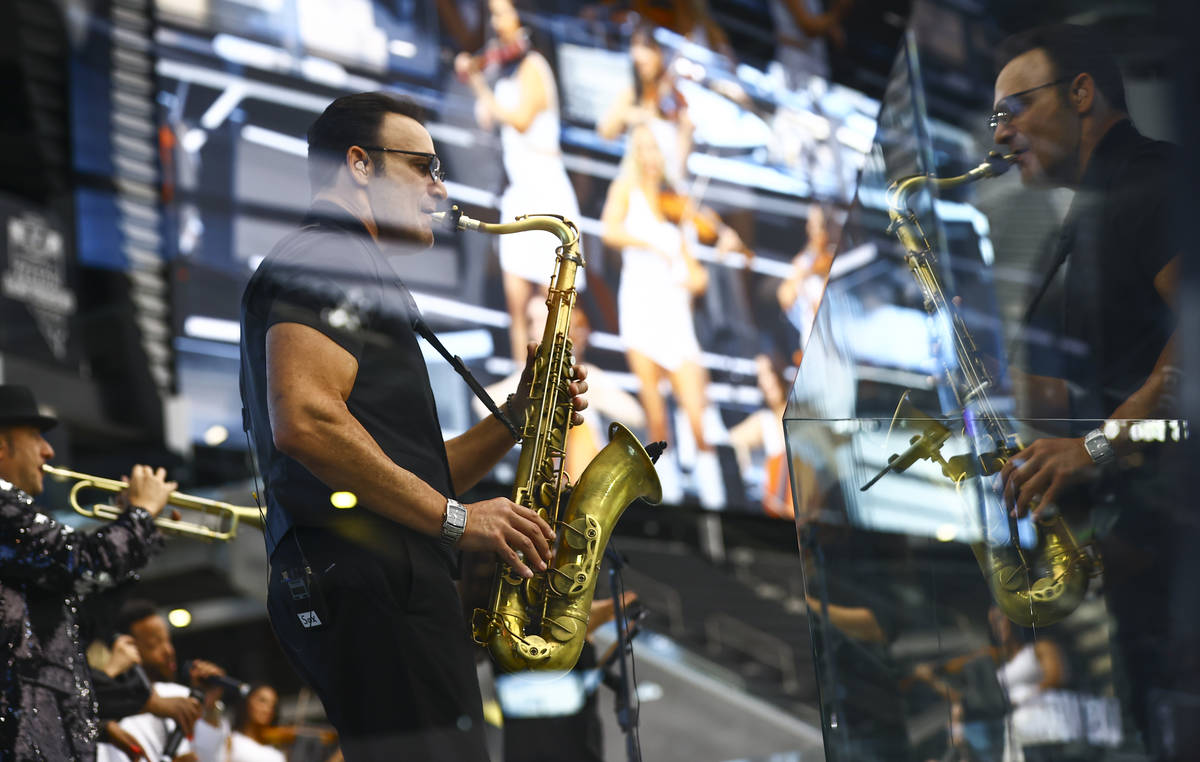 David Perrico’s Pop Strings held residency at Cleopatra’s Barge at Caesars Palace for four years, and has also performed at Myron’s Cabaret Jazz at the Smith Center for the past seven.

Cozy venues, both. But the band expanded its horizons, to put it mildly, on Monday afternoon by playing Allegiant Stadium.

Perrico and his band performed a nearly hourlong set in the nearly empty stadium. Las Vegas Raiders owner Mark Davis was among the handful of observers.

Davis and his team are using the empty-nest performances as a way to select a house band for Raiders games at Allegiant Stadium. Santa Fe & the Fat City Horns performed the same flavor of show in February. What we have learned, so far, is the Raiders brass likes brass. They appreciate Tower of Power-type power, they eat up the classic rock and Motown, string players, and diversity throughout the lineup.

The musicians also need to be proficient enough to back superstar guest stars. Carlos Santana has said he wants to play the stadium, for instance, and Slash is on the team’s wish list, too. There should be no concern there, as both acts that have played the stadium are loaded with A-plus players who have toured with international superstars, and also performed with such superstar residency headliners as Celine Dion, Lady Gaga, Aerosmith, Rod Stewart and Shania Twain.

But there is still ample work to do. No decision has been made, and we can’t rule out other live performances as the team settles on its band. We might see mix-and-match rosters, or expanded versions of existing bands. It’s all on the table, or in this case, on the gridiron.

As a music venue, Allegiant is a gorgeous facility, with the bands playing at the base of the Al Davis Memorial Torch and their larger-than-life images beaming around the stadium. But the 65,000-seat venue also presents unavoidable sound-mix challenges, with music and voices echoing around the facility when it’s devoid of a crowd. These concerns can be ironed out, of course, with repeat performances and extended sound checks.

That said, Perrico and his crew did a remarkable job of turning around a stadium performance in less than a week. The band leader was asked Wednesday if he could perform Monday. And he did.

“We were honored and thrilled to perform for Mark Davis and the Raiders staff,” Perrico said Tuesday. “The stadium is awesome.”

That lineup bounded through a setlist conceived by Davis and his live-entertainment operations team. “Ain’t No Stopping Us Now,” “Shook Me All Night Long” and “Bad Romance” were among the tunes sampled. The band unleashed Bruno Mars and Earth Wind & Fire medleys.

And special commendation to Ehling, for performing the first keytar solo ever at Allegiant Stadium. He’s certainly put his UNLV Liberace Scholarship to good use.

The venue’s first ticketed show is crossover-EDM artist Illenium on Saturday. Garth Brooks’ production rodeo is next, on July 10. We can say, with great confidence, they’ll have tough acts to follow.

Sammy wipes it out

There’s only one way to rock! The box office, we mean.

Tickets to the first four shows of Sammy Hagar and Friends at The Strat Showroom sold out within two hours Tuesday morning. The onsale to Hagar’s Red Head fan club was 10 a.m., the 3,200 tickets were gone within two hours.

Wayne Newton has made some visits to the Bugsy’s Cabaret venue at the Flamingo, where Piff the Magic Dragon has left a scheduling void as he’s moved to Flamingo Showroom. Expect The Wayner to return to action there, toggling dates with Stabile Productions’ “X Burlesque” adult revue.

Genuine Vegas history permeates in that room. Matt Stabile’s father, Joe, was Jerry Lewis’ manager for 48 years. Angela Stabile was an original member of “Crazy Girls” at the Riviera, and posed for the original “No If Ands Or …” billboard and statue. And Newton is, um, Mr. Las Vegas.

On the topic of great Vegas live-music acts, our friends the Windjammers are playing Sunset Station’s Club Madrid on Saturday night. The set is 8 p.m.-9:30 p.m., no cover. This is the band’s first show at Sunset Station, having previously headlined Rocks Lounge at Red Rock Resort and Copa Room at Bootlegger Bistro. The band’s fans have set a course for adventure, as it were.