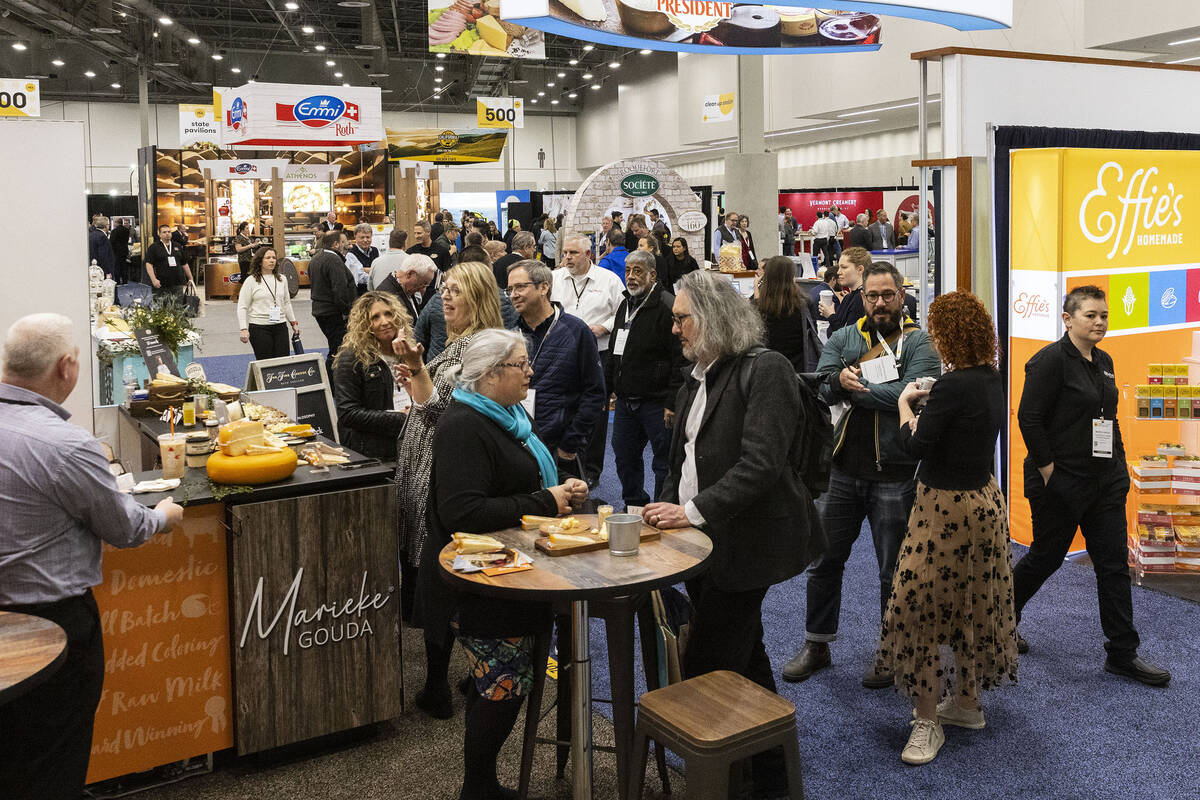 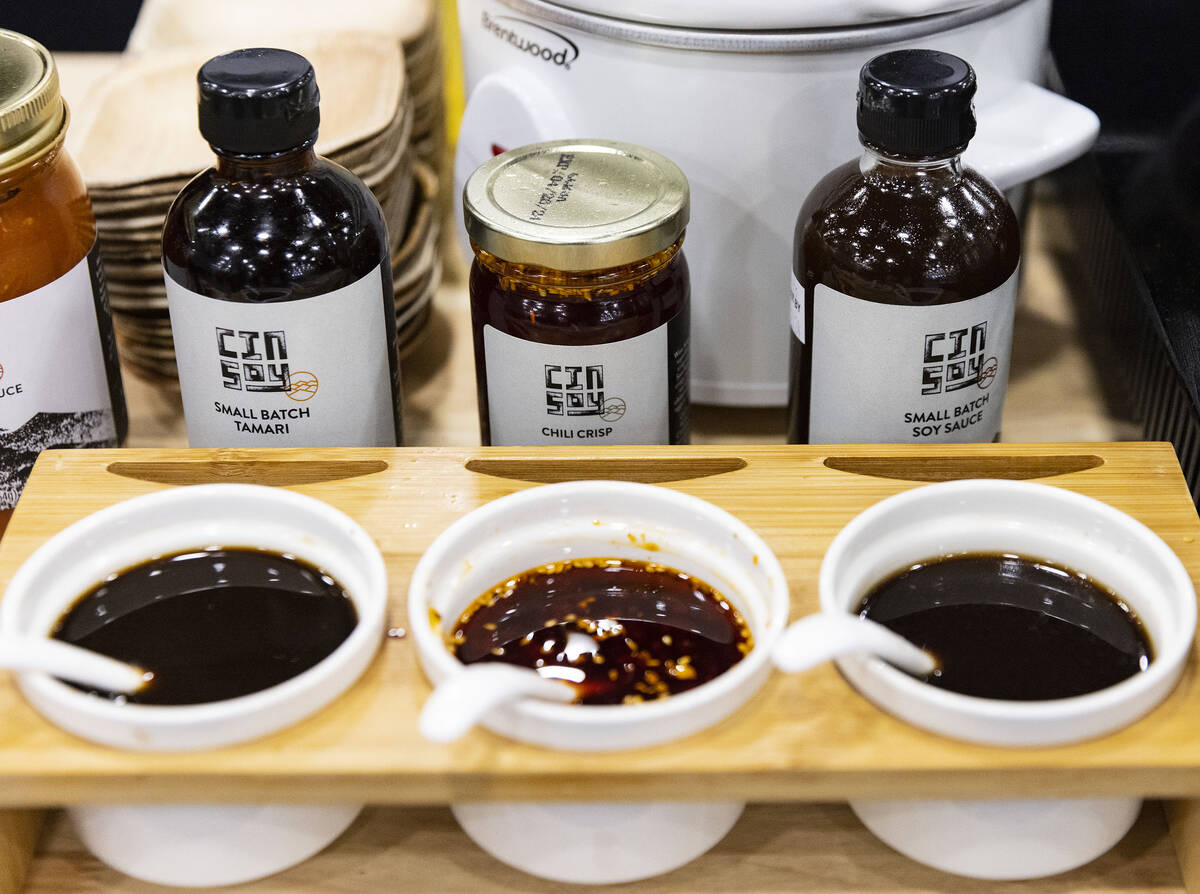 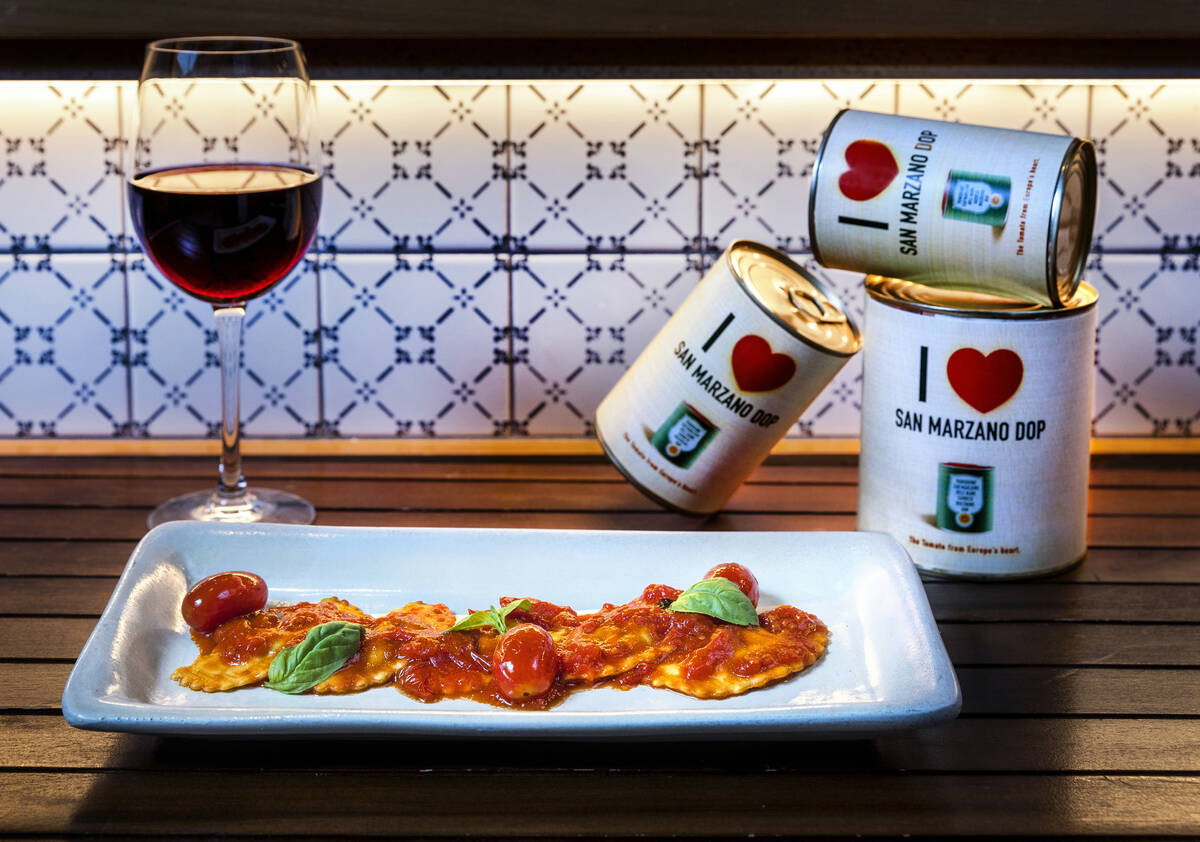 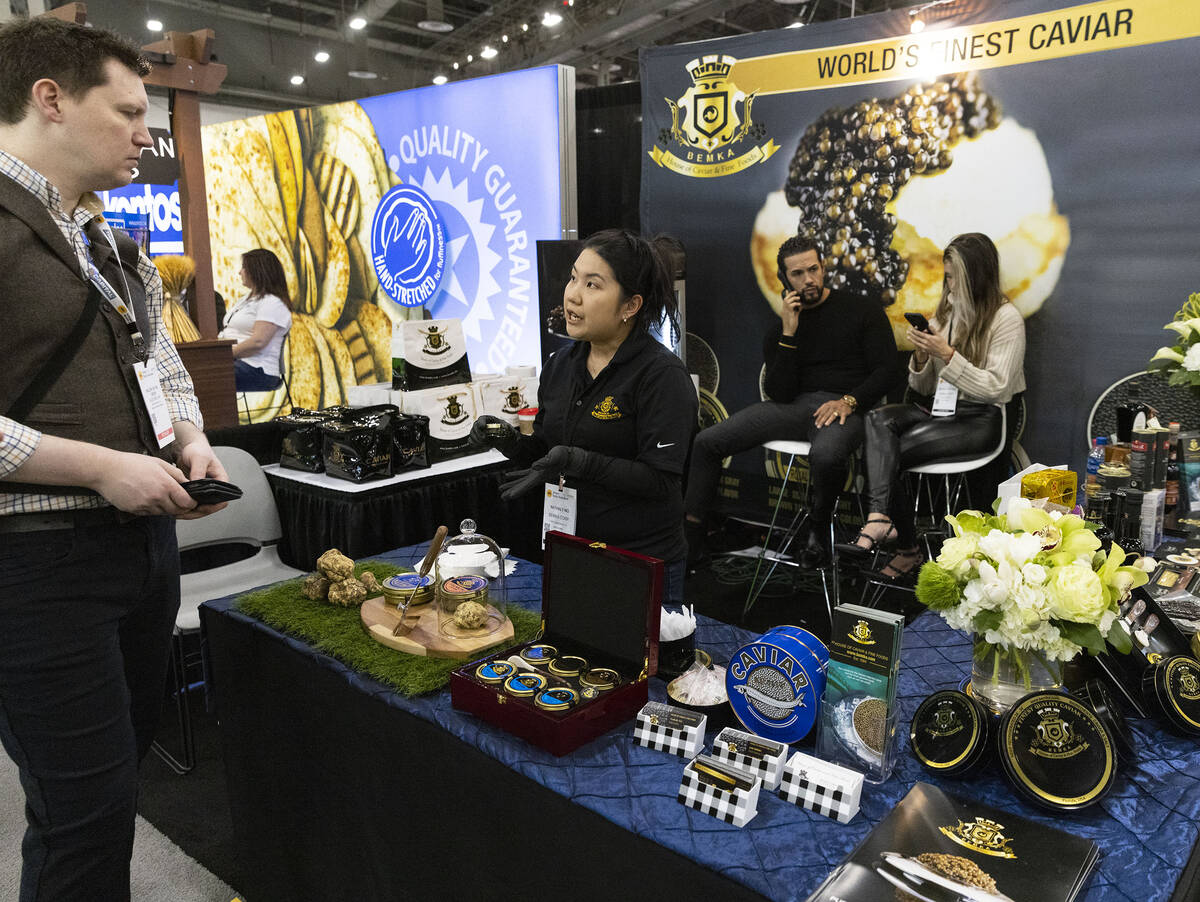 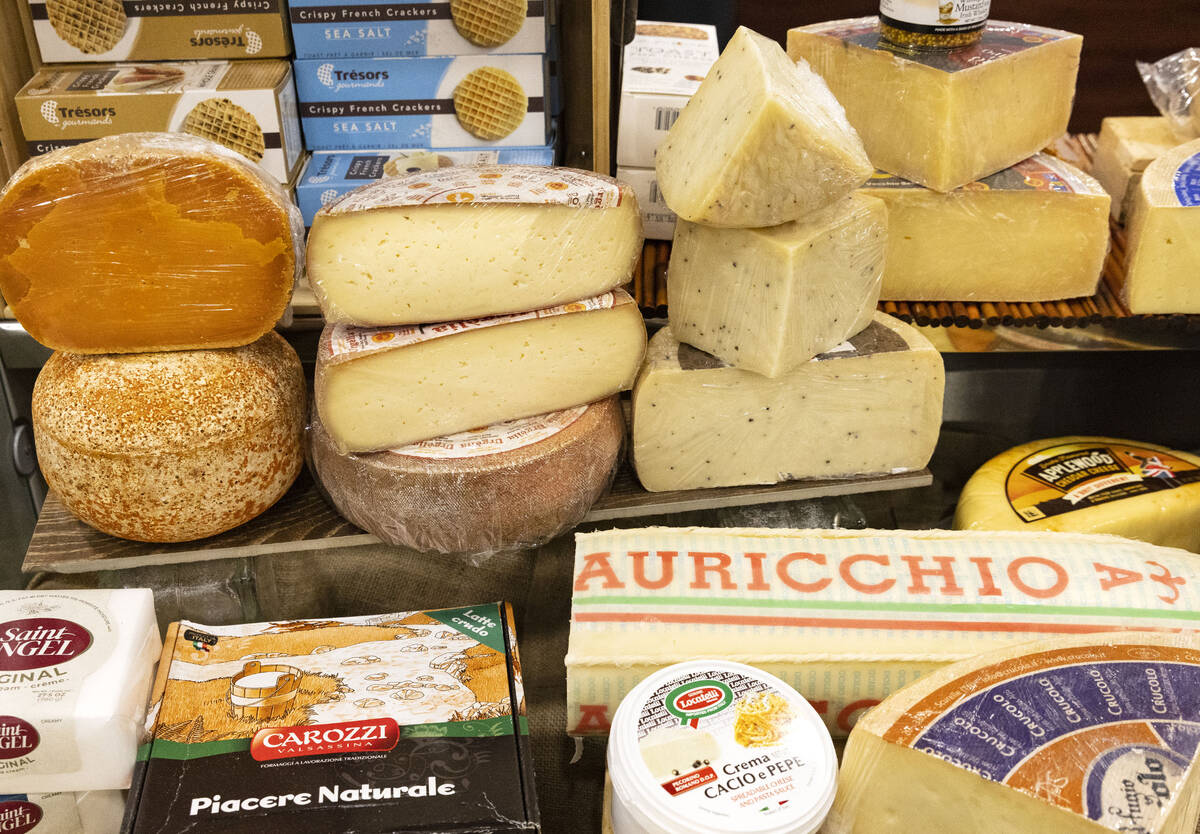 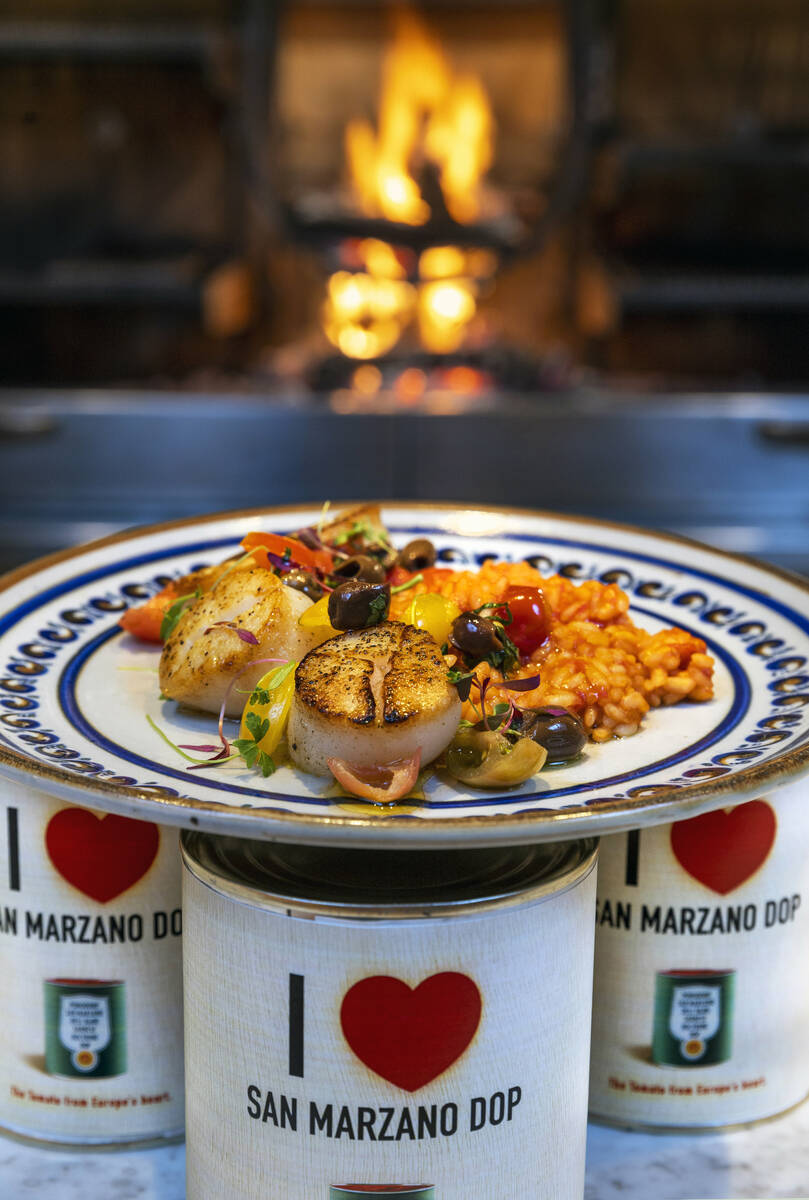 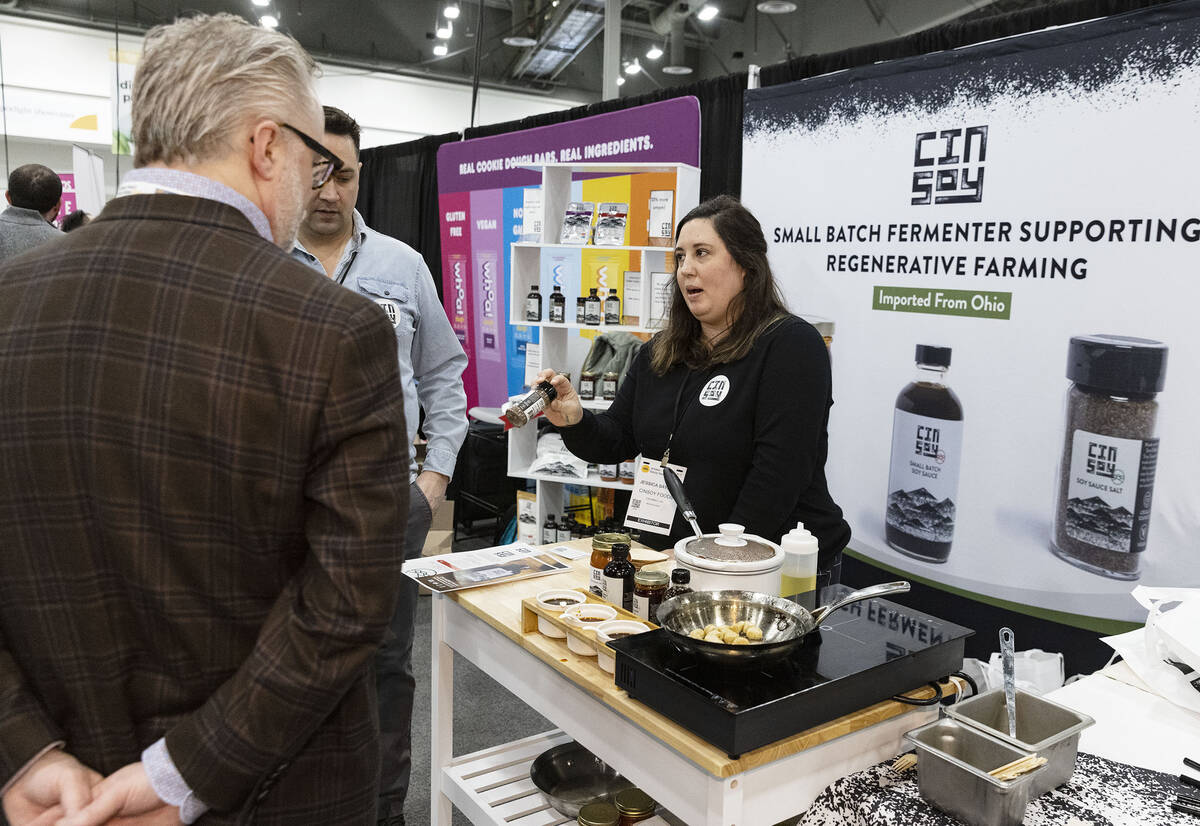 Jessica Saydah of Cinsoy Foods, shows one of her products to a potential buyer at Cin Soy booth during Fancy Food Show at the Las Vegas convention Center on Monday, Jan. 16, 2023, in Las Vegas. (Bizuayehu Tesfaye Las Vegas Review-Journal) @btesfaye 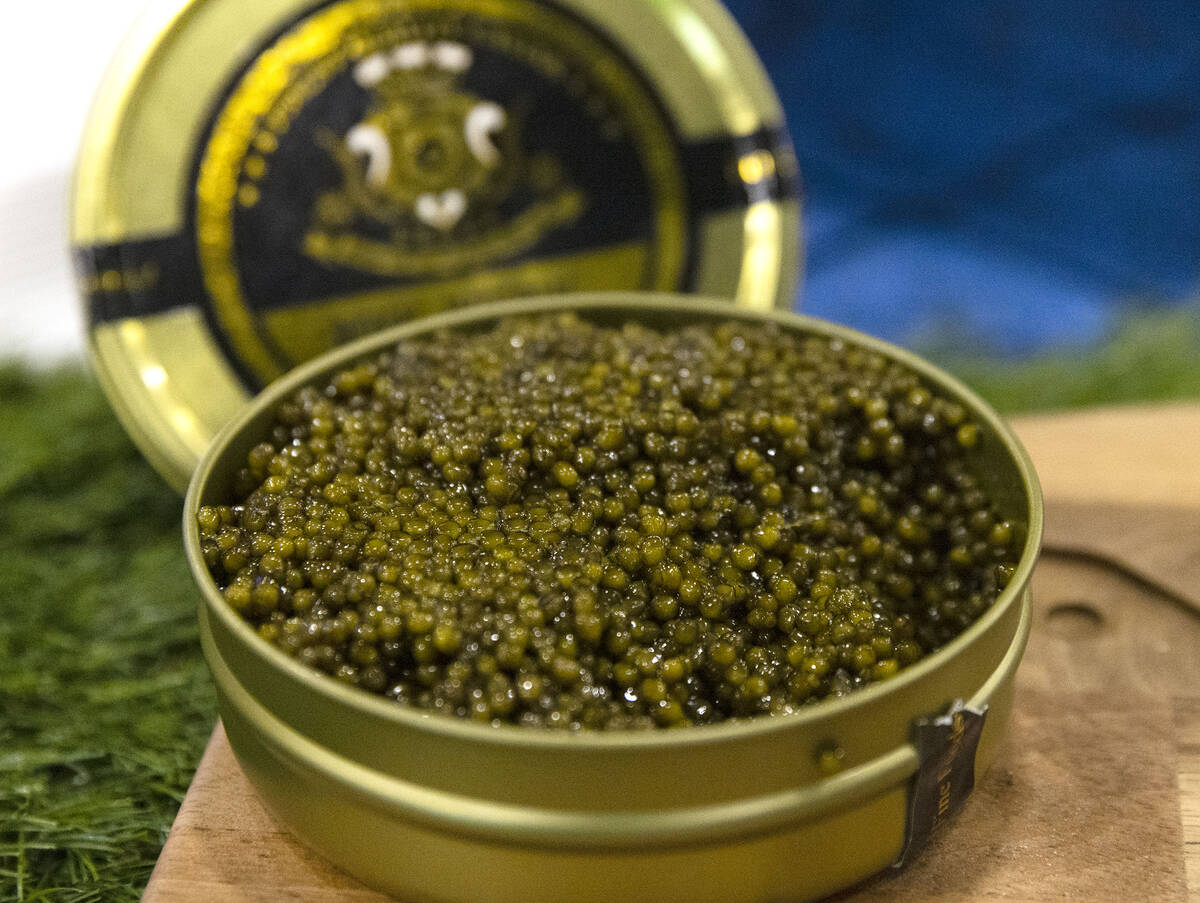 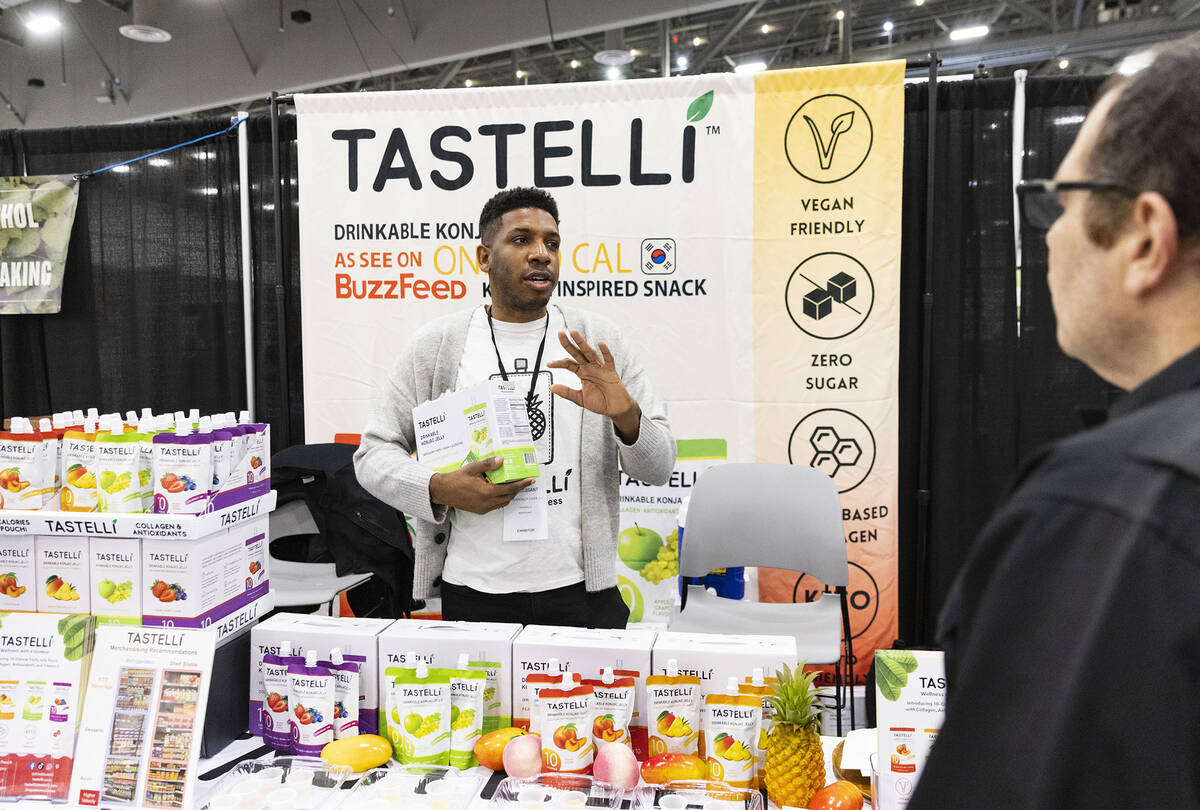 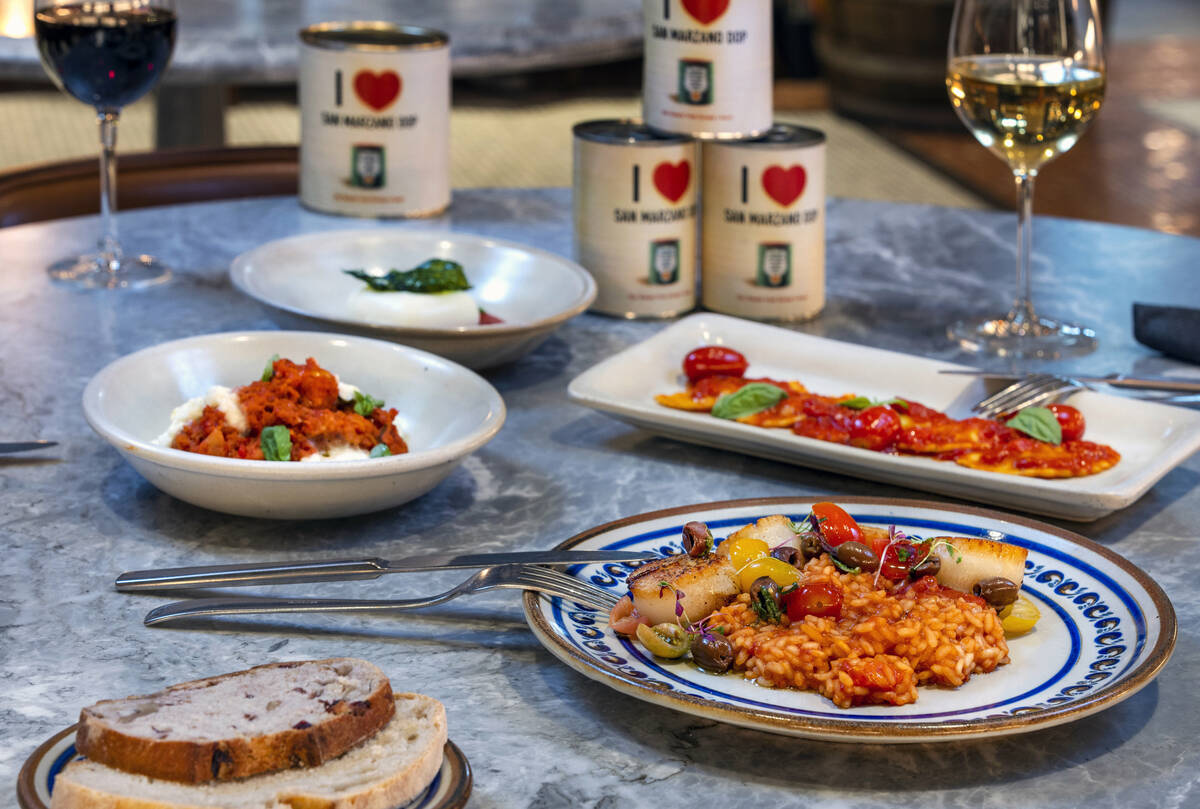 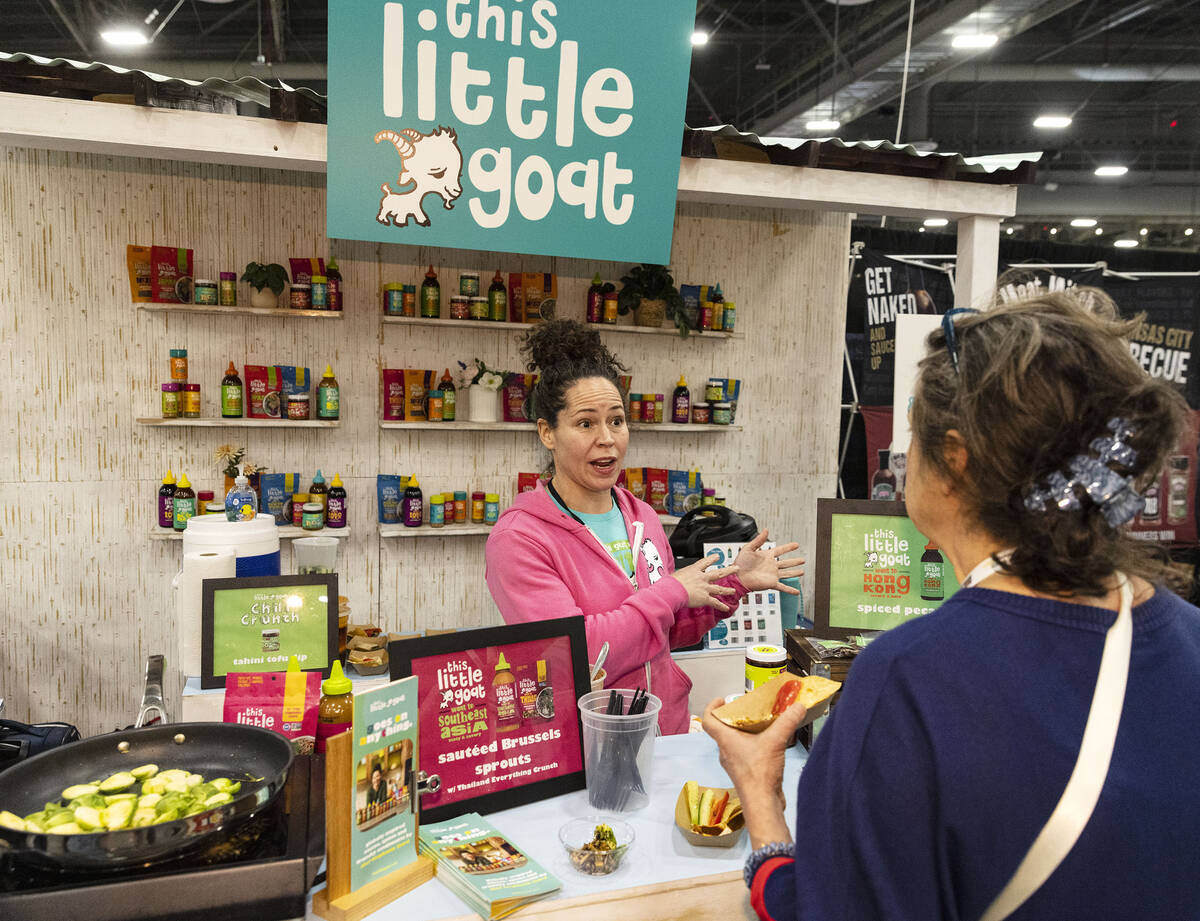 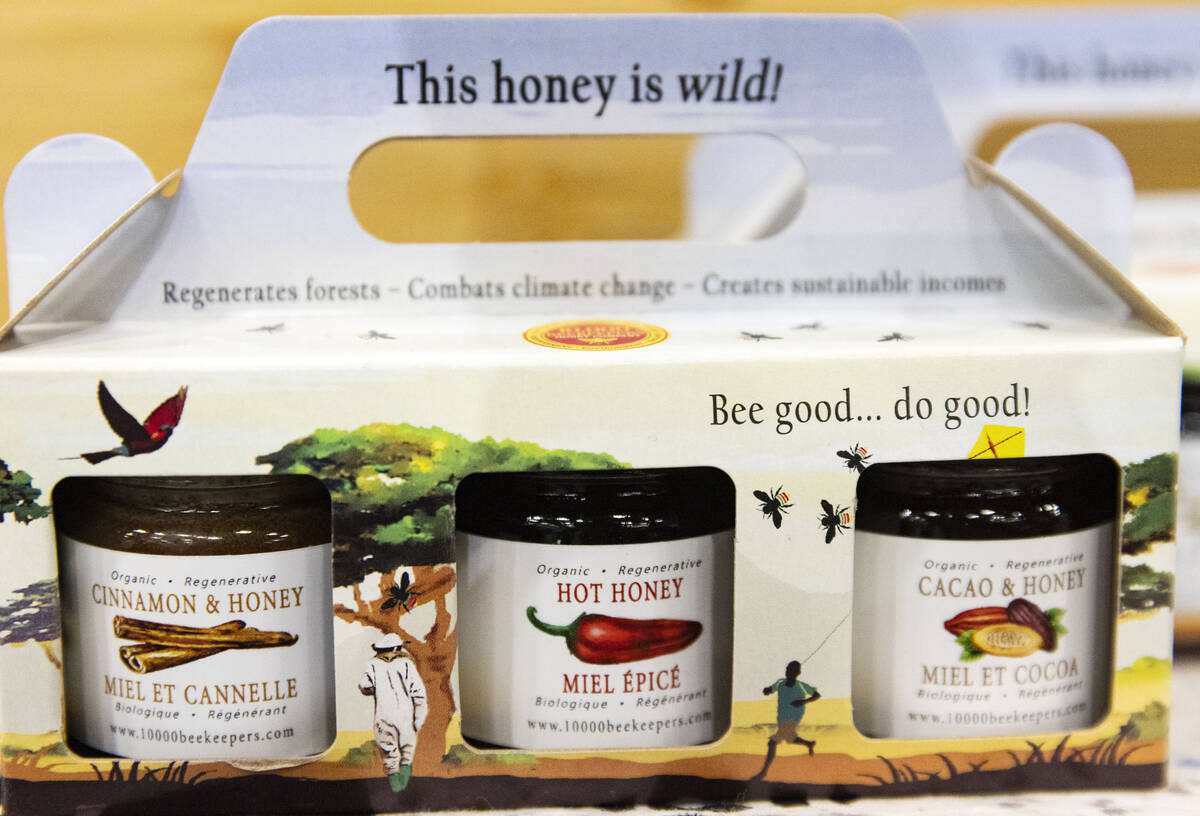 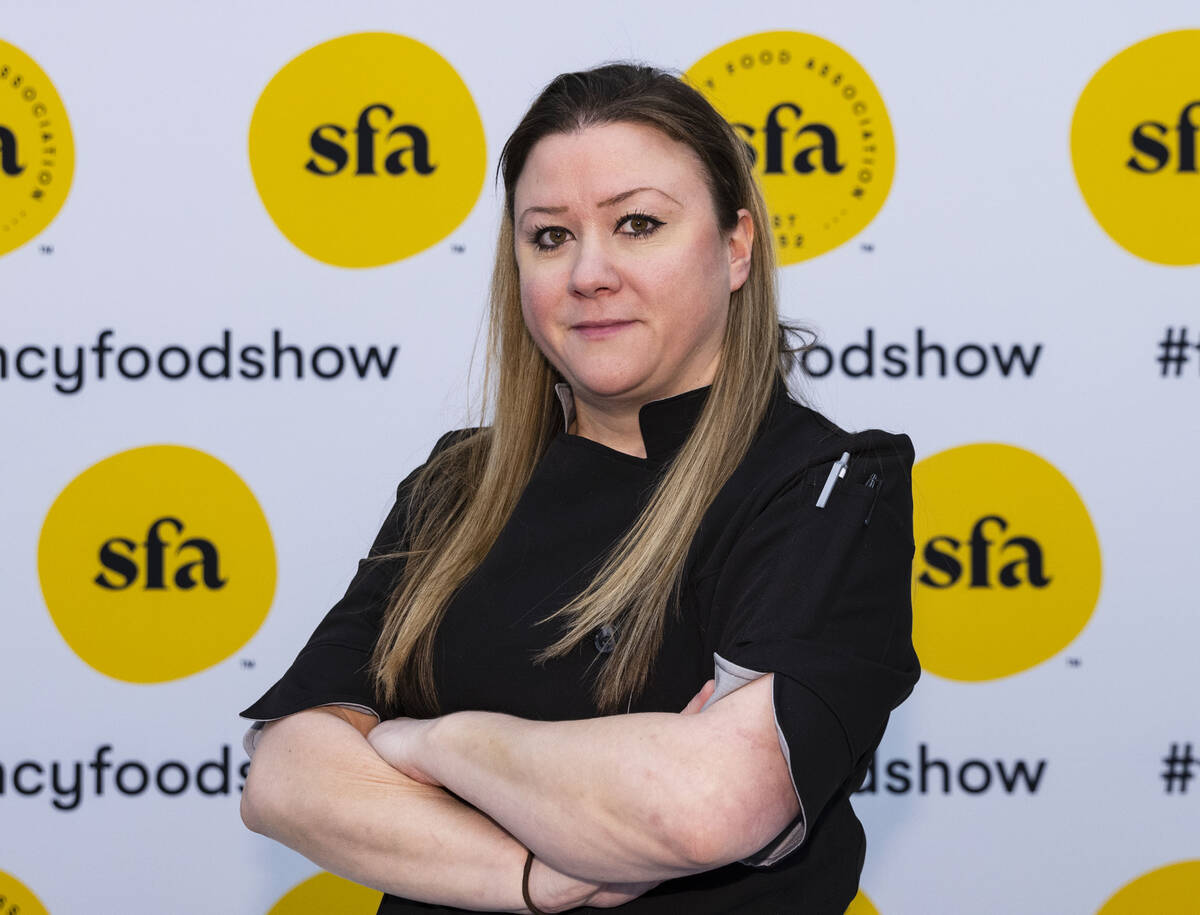 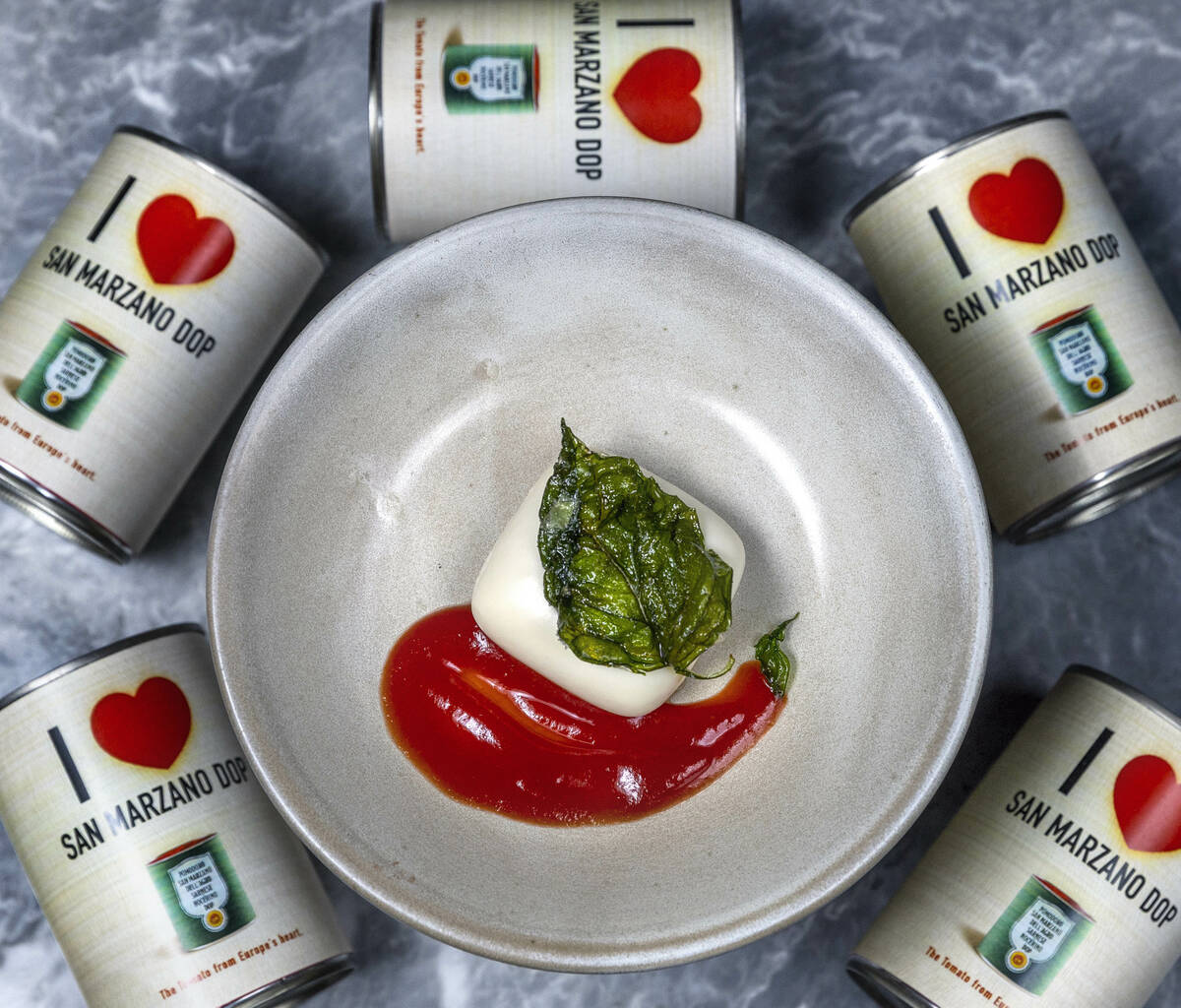 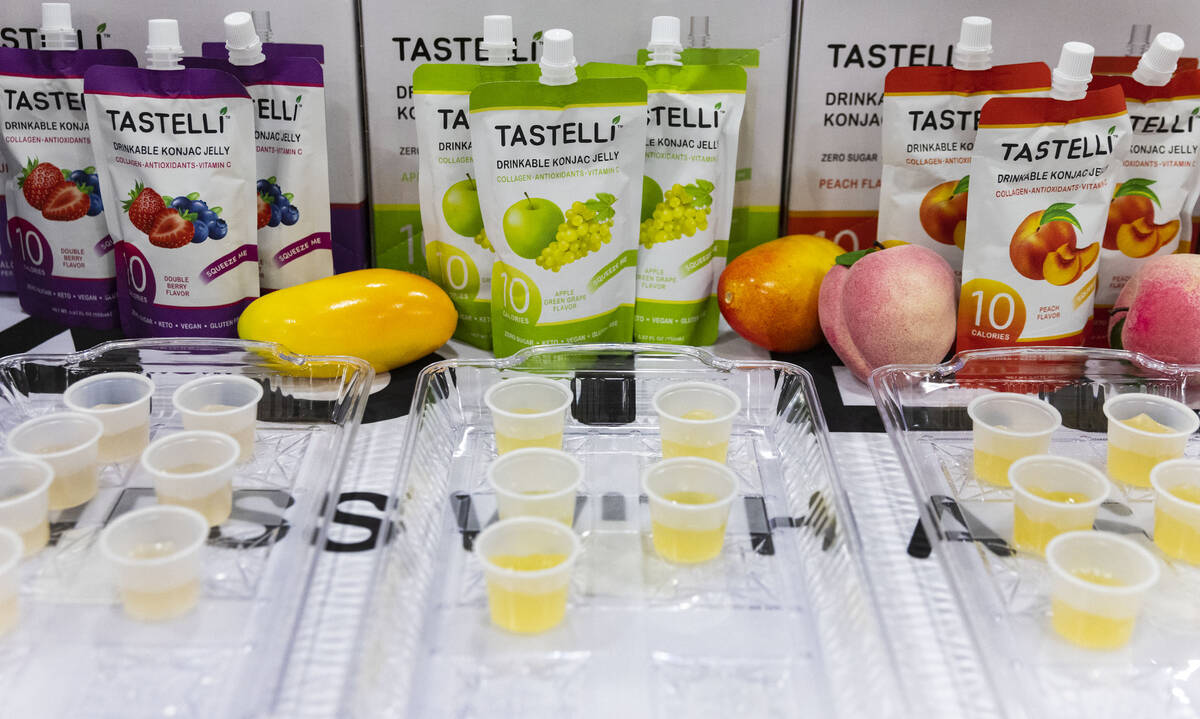 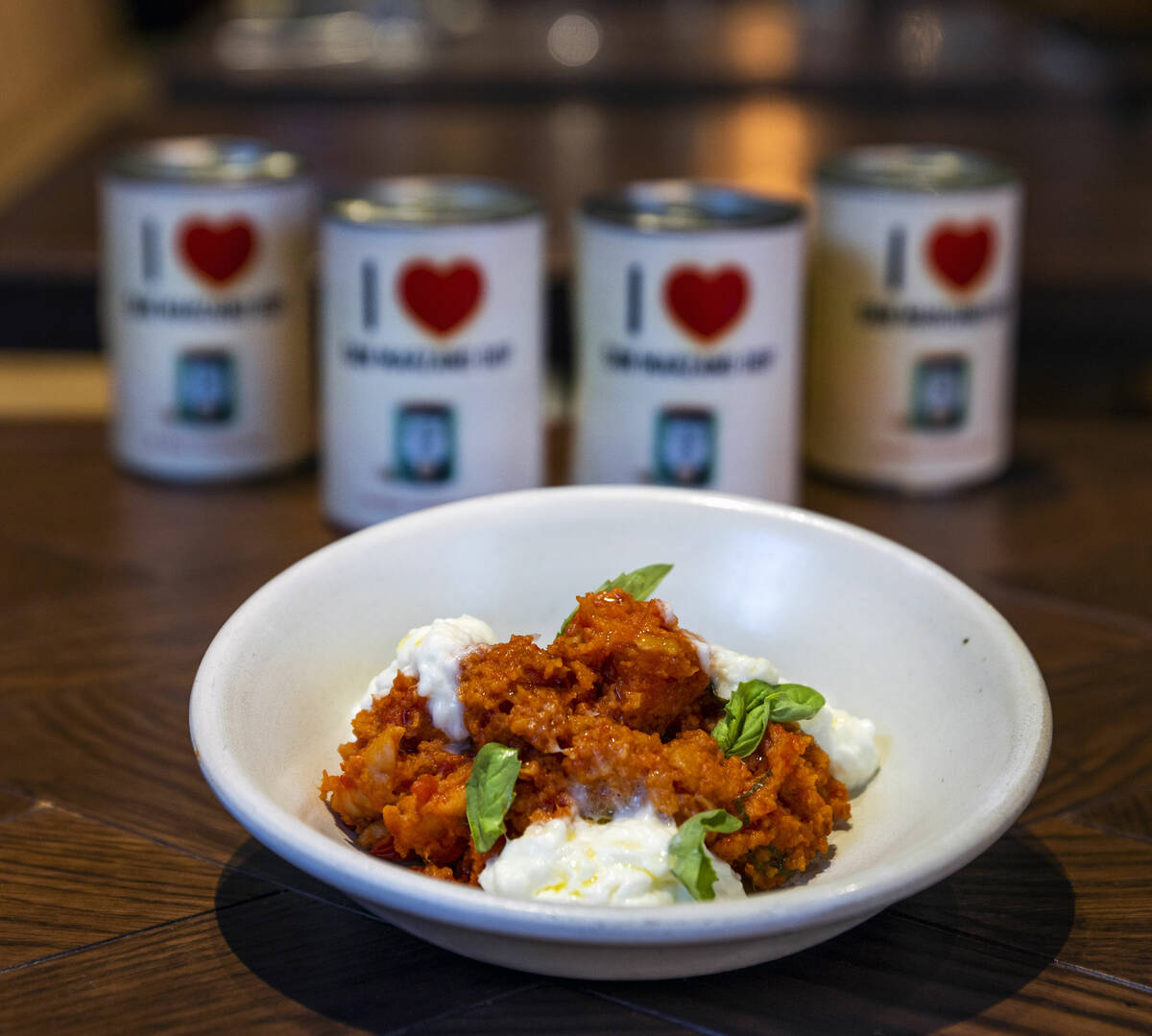 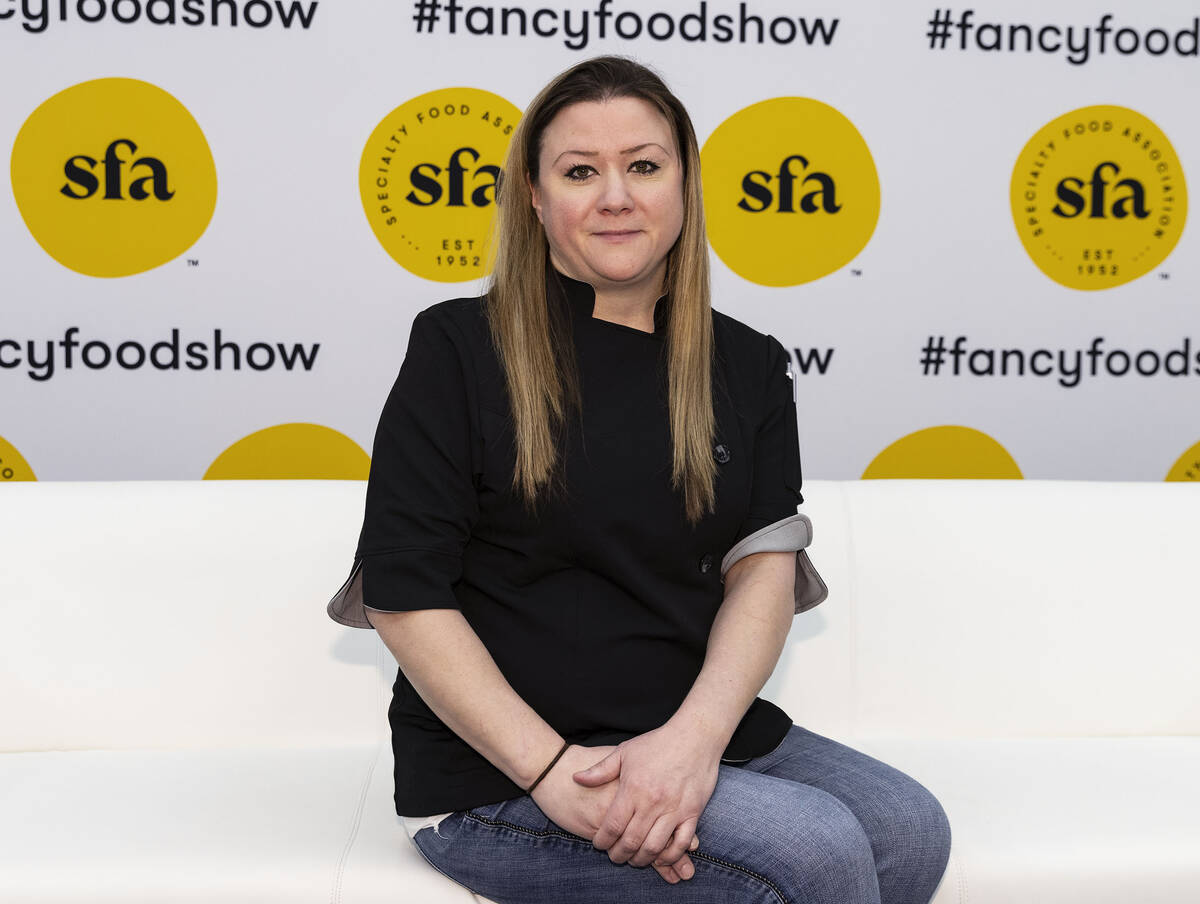 It’s difficult to find someone fat at the Winter Fancy Food Show.

Yes, there are folks who could stand to lose weight, as there are in any crowd composed mainly of Americans, but truly zaftig creatures (of whatever gender) are in short supply. This will seem counterintuitive to some.

You might reasonably ask: Surely people whose lives revolve around making, buying and selling food products, surely a significant chunk of these people, will be amply upholstered, a hazard of the job? But no.

And then epiphany arrives (on a Thai chili mushroom chip). Fancy Food, presented Sunday through Tuesday at the Las Vegas Convention Center by the Specialty Food Association, is not a gathering of trencherfolk. Instead, attendees are professional tasters, samplers, grazers (grazing, instead of fewer large meals, being one way to keep off the weight).

In this light, Fancy Food is not just a hubbub of culinary abundance. It’s also the occasion, through grazing, to suss out the major food and drink trends in the years ahead from more than 1,100 exhibitors. Those trends range from a global home pantry, meal convenience items and sustainable ingredients to the widespread use of chilis, wellness products, creative alcohol-free beverages and more.

The condiment is pleasingly salty, with a background hum of heat and vinegar, and a thick pleasurable crunch. The condiment and other This Little Goat products draw on Izard’s restaurant dishes. “It gives people the ability to add many layers of flavor at home that they liked from when they come into the restaurants,” she said.

Will Izard join many other celebrated chefs with a Vegas outpost? Not right away. But never say never. “I’m still pretty involved in my restaurants,” she said. “But now that I live in L.A., Vegas is right here.”

African Bronze Honey Company features honeys created in collaboration with thousands of beekeepers from national parks in Tanzania and Zambia. The bees collect a nectar, called honeydew, that is secreted by aphids feeding on the sap from forest plants. The honeydew helps the bees create a highly concentrated wild honey packed with antioxidants.

Among the new honey flavors: organic Miombo blossom, organic cinnamon and honey, and organic cacao and honey. African Bronze is a B Corporation, certified for its environmental and social performance, and $1 from each jar goes to the company’s African partners, said Paul Whitney of African Bronze.

When it comes to forward-thinking farming, you don’t typically think of soy sauce. From Ohio. But CinSoy manufactures soy sauce in small batches using soybeans grown on an Ohio spread owned by the same family for three generations. Soybeans thrive in Ohio soil — it’s the state’s No. 1 crop.

The farm showcases regenerative agriculture, a system that promotes topsoil renewal, biodiversity, better water use, plants that transfer carbon dioxide into the soil, and a reduction or elimination of tilling to improve the health of the soil.

Jelly in pouches, kava in bottles

At the Tastelli booth, samples of drinkable konjac jelly are being slurped from pill cups. Tastelli comes in colorful pouches with twist-off caps, in flavors such as peach, mango pineapple, apple green grape and double berry. The pouches tout Tastelli benefits: zero sugar, collagen, antioxidants, vitamin C. You squeeze the pouches to move up the jelly, then suck.

“It’s like a sexier version of Jell-O,” said John Kim of J Plus Specialty Foods, maker of Tastelli, which is fashioned from the konjac plant, the same plant used for shiratake noodles.

Kava, the calming mood-elevating drink made from the root of the Pacific kava plant, had a moment some years ago, and that moment returned at Fancy Food. Chad Nini, chief euphoria officer of Terra Incognito kava, based in Vegas, urged passersby to sample his liquid relaxation.

“You guys need to get into this — kava is a communal thing.”

After staying away during the pandemic, the Europeans are back at Fancy Food. Leading Vegas chef Nicole Brisson of Brezza, Bar Zazu, and Amari taking shape at the UnCommons development, noted the renewed presence of European exhibitors while she grazed the show as an official trend spotter.

The chef praised Arke Sicilian olive oil (“grassy, with a slightly floral undertone”), carta di musica crackers from Sardinia, Spanish cheeses (“I could use them at Bar Zazu”), Amarena sour cherry compote from Casa Forcello, European vinegars, and tomatoes certified as originating in the San Marzano region of Italy.

At the San Marzano booth, an expert discussed tomatoes peeled by machine versus tomatoes peeled by hand. At one by-hand producer, Brisson said, “there is a woman standing and peeling tomatoes. She listens to classical music and has a fan to keep her cool. The tomatoes stand up in the can so they’re super relaxed, surrounded by each other.”