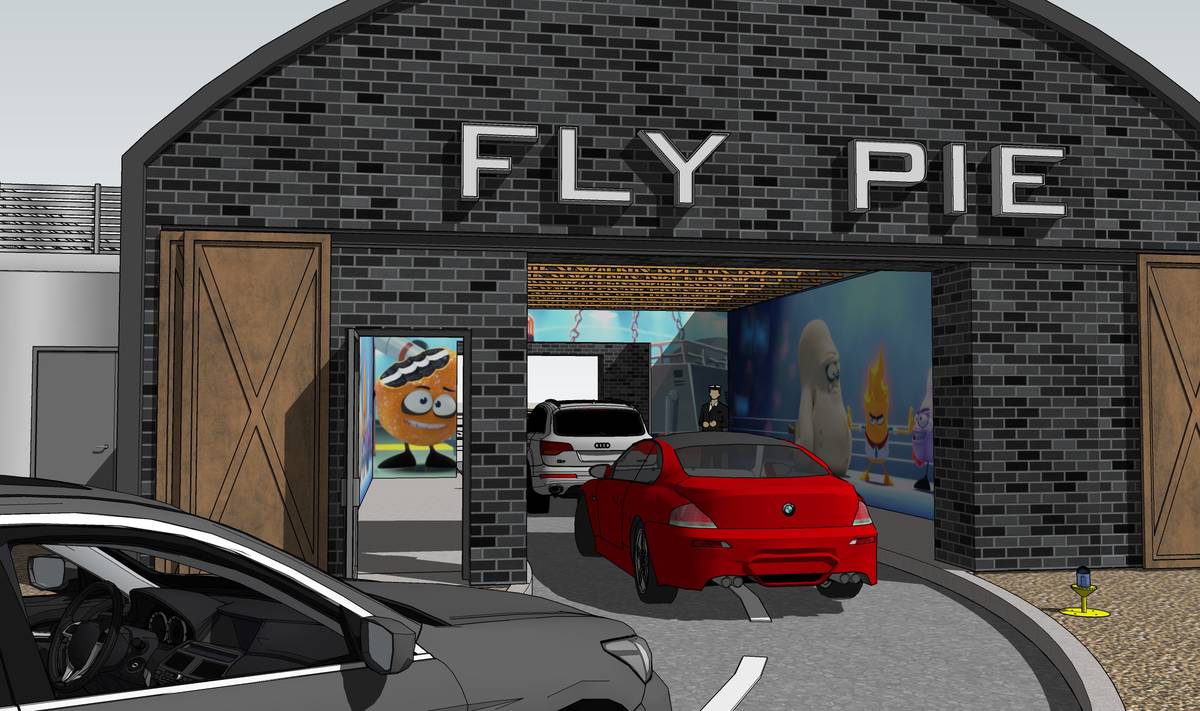 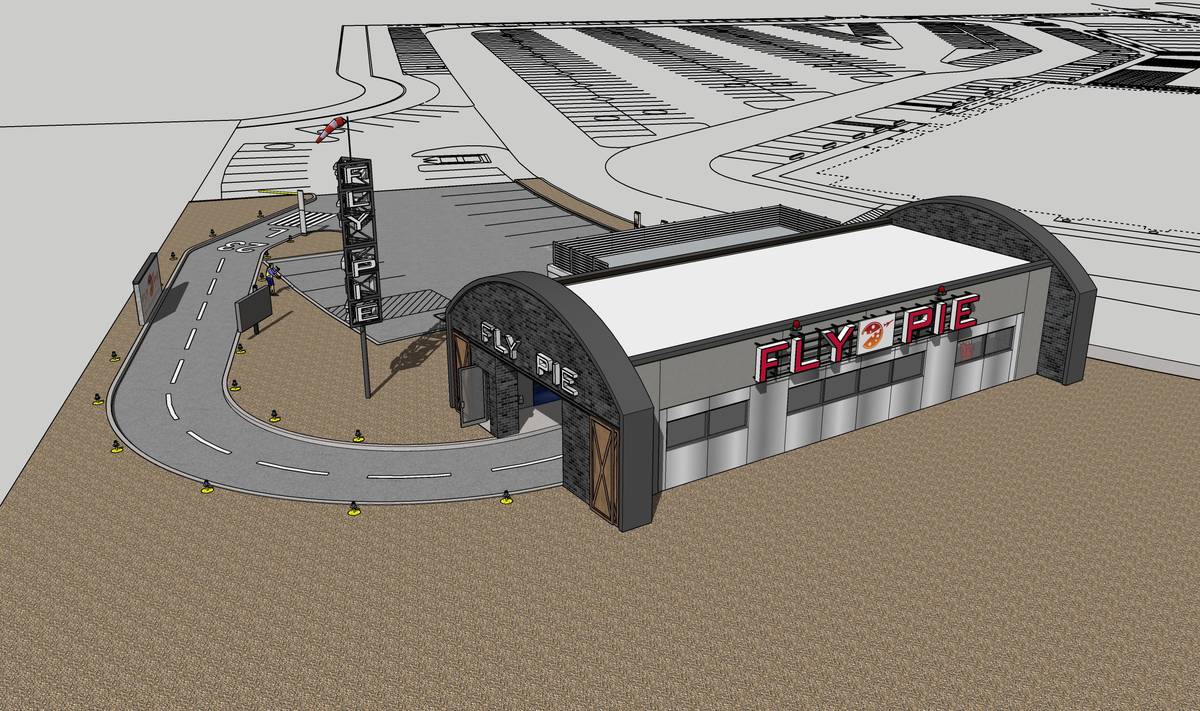 An overview rendering of Fly Pie, scheduled to open in Henderson in April. (Fly Pie)

If you’re a pizza lover who’s longed for a way to get a pie on the fly, your patience is about to be rewarded. And that pie will come with an appetizer of entertainment and some community benefits for dessert.

Godino said he started thinking about alternative concepts in 2018, when he noticed that an ever-growing percentage of his business was moving to off-premises.

“Why doesn’t Blaze have a drive-thru?” he wondered. “You can build your own pizza in 150 seconds.”

He thought about pursuing the idea himself but knew he needed a hook.

“We thought about a tunnel that looked like a pizza oven, with flames on the wall, themed seasonally, like at Christmas some holiday stuff,” Godino said. “Then Anthony and I came across each other and he had the same concept, a drive-thru pizza place called Fly Pie. We just erupted in a roar and said, ‘We have to do this.’ ”

Their meeting was as serendipitous as the fact that they shared an idea. Zuiker, who grew up in Southern Nevada but lives in Malibu, California, had come to Las Vegas with his wife in November 2019 because his mother was to have heart valve replacement surgery at St. Rose Dominican Hospital’s Siena Campus in Henderson. But she had a stroke and died before the surgery.

“We were completely traumatized,” he said.

Looking for some level of refuge, they stumbled onto Born and Raised, which is across Eastern Avenue from the hospital, after a quick web search.

“I was blown away by the place,” Zuiker said. He went back Sunday to watch football. And then he emailed Godino, asking to meet.

“We were just talking off the cuff,” Zuiker said, “about the next things we’re working on, including Fly Pie, which I had been noodling for three years. We were two people from Las Vegas who didn’t know each other but had a similar concept.”

And it would lead, Zuiker said, to “the emotional impact of brotherhood and camaraderie — two great minds giving back to the community with something that’s never been done.”

What they ended up with was a simplified menu of eight specialty pizzas and a build-your-own option, priced at $9 to $11, plus fries, chicken wings, garlic knots, churro tots and deep-fried Oreos. For the pizza dough, they’ve brought in a company that replicates the water of New York and Naples, Italy, which are chemically similar.

“Everything we’re doing is a little bit upscale, a little bit different,” Zuiker said. “Quality food, very rustic, artisanal pizza.” It will be drive-thru and walk-up only.

And then there’s the entertainment aspect.

“I created a Honda Civic, but Anthony came in and made it a Bugatti,” Godino said.

Those who approach the drive-thru for the airport-themed restaurant will be guided by an employee dressed like an airplane mechanic, who will wave them to a window for ordering and paying. They’ll then be escorted into the tunnel, two cars at a time, where they’ll view animated “Pixar-quality” films Zuiker created, starring Fly Pie’s food mascots.

And they have aromas.

“You may be watching a movie about a little churro tot gaining his confidence,” he said, “and you’ll smell cinnamon and sugar.”

You’ll spend about 70 seconds in the tunnel while they’re cooking your food, after which you’ll drive forward to pick it up.

“That’s your in-flight movie,” Zuiker said. “Then you land at home.”

Their timing was fortuitous.

“We had the idea before COVID,” he said, “it’s working nicely during COVID, and I think it’ll be part of the norm after COVID.”

The walk-up window, originally designed for delivery drivers, is a speedier option but a no less entertaining one, with a TikTok wall and a character spot for selfies. A graffiti wall with work by local artists will change quarterly and will be in tune with the times; the first will feature the characters with blue masks.

“So there’s a lot to do outside the tunnel, too,” Godino said.

And they’re invested in benefiting the community.

“We think it’s emotionally important for our community,” Zuiker said. “This may be the best part of someone’s day.”

That investment will extend to employees. Each staffer will get an American flag patch and a wings patch for their vest and will be able to choose from 2,000 others to reflect their own interests, be it Black Lives Matter, LGBTQ, gardening or something like “high maintenance.” They’re aiming for great diversity among their employees and a program of leadership training.

“We want to vertically integrate and promote from within and show people how to be leaders,” Godino said.

“A young person comes in,” Zuiker said, “kicked out of their house. We’ll employ them, train them and they’ll move up. We want to have a program that leads to a level of ownership.”

They plan a second location on Craig Road near the Cannery by about the end of the year, and plan to franchise nationally and maybe even globally.

“And change the industry for good,” Zuiker said. “We’re just trying to leave behind a really interesting legacy.”

“It’s about the culture,” Godino said. “It’s much more meaningful than making money.”