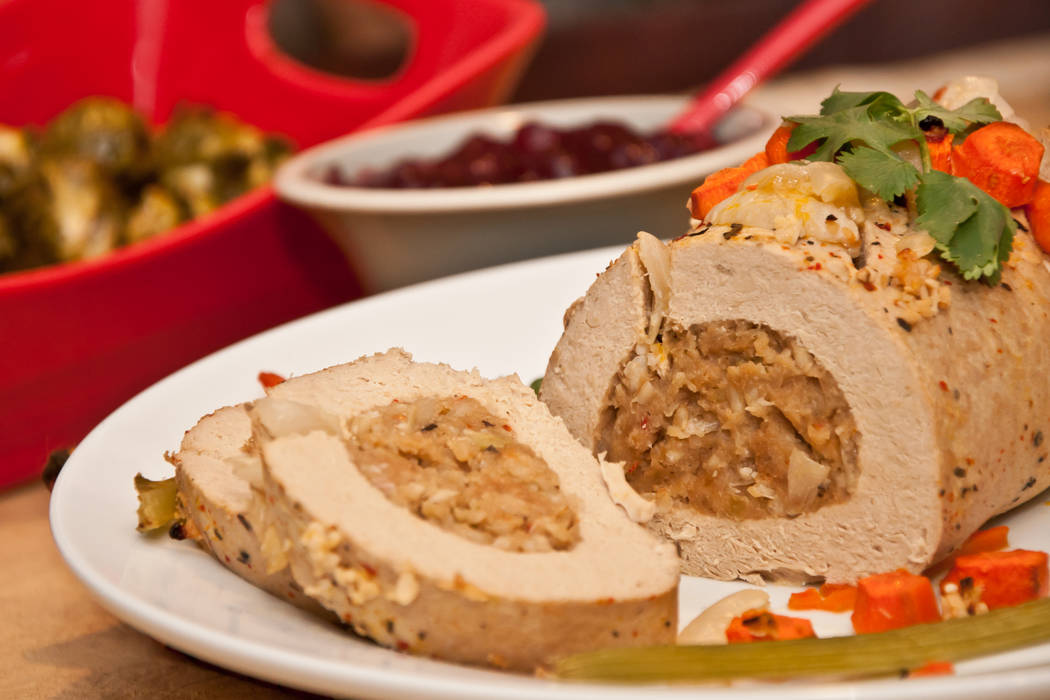 The three big players in the faux meats field — Tofurky, Gardein and Field Roast — all market at least one version of a “holiday roast,” which are logs of meat substitute, filled with plant-based stuffing in the center. (Getty Images)

Thanksgiving is that time of year when we tap our favorite traditional family recipes to impress the people we love. But in a day when more and more people are eliminating animal products from their diets, that can be tricky. What do you do when you learn a vegan is coming to dinner? We asked some experts how to tweak a few recipes to accommodate them, without straying too far from your old favorites.

While many traditional side dishes seem vegan-friendly, there are plenty of little things (including some of your secrets) that might render them off-limits for vegans. Fortunately, there are a few tricks.

Jamie Tran, chef/partner at The Black Sheep, likes sausage in her stuffing. To mimic its flavors and textures while cooking for vegan friends, she’s come up with several options. First, she uses mushrooms for texture, adding them to a mirepoix (onions, carrots and celery) sautéed in vegetable stock. For smokiness, she adds paprika. And for a complex sweetness, she soaks cranberries in rum before adding them to the mix. Her final bit of advice: Don’t forget aromatics such as garlic and thyme.

“That balance of acidity, sweetness and spice will satisfy somebody’s taste, even if they’re not vegan,” Tran promises.

Vegetable dishes also can be tricky, especially when your holiday recipe calls for a cheesy presentation. Sonia El-Nawal, chef/owner of Rooster Boy Café, has a great hack to use in recipes that call for Parmesan or other cheeses.

“Nutritional yeast is a great substitute. I’ve made several dishes using it, like a Caesar dressing. Or crumble it like Parmesan. It’s great on cauliflower that you’re going to roast whole. It’s beautiful. It’s very diverse in its usages and adds that tang that you need as (a substitute for) cheese.”

Mashed potatoes may be the easiest side to adjust. The experts recommend making a dairy-free version using veggie broth, coconut oil, plus a little extra salt and garlic (or garlic salt).

Baking can be an exact science, and subbing out vegan-friendly ingredients can be a challenge. Several chefs recommend using cashew milk in desserts such as sweet potato pie, where the mild nut flavor will complement the dish. Vegan Yack Attack founder Jackie Sobon, however, says that if you’re only going to keep one non-dairy “milk” on hand for the holiday, unsweetened almond milk is the most versatile and unintimidating.

“People have an odd relationship with soy milk, even though it’s really great. So I just recommend unsweetened, plain almond milk. Typically it’s a one-to-one substitution.”

Replacing butter with margarine or a similar spread is second nature to some, taboo to others, but a huge help in making and enjoying plant-based baked goods. VegeNation chef Donald Lemperle is a fan of the Earth Balance brand, which he says is healthier than some others, and versatile enough to use both in baking and as a spread.

“Earth Balance is non-GMO canola oil, with no hydrogenated fats and no trans fats. I sub it out (for butter) in something like my pumpkin pie crust recipe at one-for-one, and I still get that flakiness and that texture from the crust that I would from butter.”

All holiday desserts taste better with a dollop of whipped cream. Lemperle assures that homemade whipped coconut cream will appeal to your guests.

“You want to buy the coconut milk that’s in the cans,” he advises, noting that it’s available in most Asian markets. He then advises putting it in the refrigerator overnight, and scooping out the solids that rise to the top. Whip those solids in a mixer with sugar and vanilla extract (he recommends “a couple of tablespoons of sugar per cup of coconut solids,” but advises tasting as you go).

The gelatin from animals in normal marshmallows makes them a non-starter for vegans, which affects everything from hot chocolate to holiday desserts. That’s why Keris Kuwana, who will serve as pastry chef for the Forum Shops outpost of San Francisco’s Slanted Door, recommends Dandies Vegan Marshmallows. She says she discovered them after she was asked to create Rice Krispies Treats for a vegan, and she’s been using them atop her vegan sweet potato pie ever since.

“You can’t even tell the difference,” she promises.

Kuwana also has a suggestion to use in any baking recipe that calls for egg whites: a liquid called aquafaba.

“Aquafaba is the water off of garbanzo beans, or chickpeas,” she explains. And while some online recipes recommend draining and straining the water from canned chickpeas, she prefers to make her own. She boils the chickpeas, reserves the water and reduces it over heat to a little less than half. The slimy liquid can then be subbed out for egg whites at a ratio of two tablespoons per egg white in any recipe that calls for whites, including souffles and meringues.

“You’re not going to fool anybody with the main course,” cautions Diana Edelman, founder of vegansbaby.com. But she’s also quick to note that faux meats have come a long way.

“The first time I had Tofurkey, I thought it was terrible. But a lot of them have really grown up in the last few years, and they’re pretty good now.”

The three big players in this field — Tofurky, Gardein and Field Roast — all market at least one version of a “holiday roast,” which are logs of meat substitute, filled with plant-based stuffing in the center. “Tofurkey is probably the most well-known,” Edelman says, adding that among vegans she encounters, “the most popular one is the Field Roast.” She singles out the latter’s Hazelnut Cranberry “Roast en Croute,” which comes in a Wellington-style pastry shell and is filled with a sausage-flavored stuffing. She also notes that Field Roast’s Celebration Roast is more affordable, and is popular with some because it “kind of looks like a ham.”