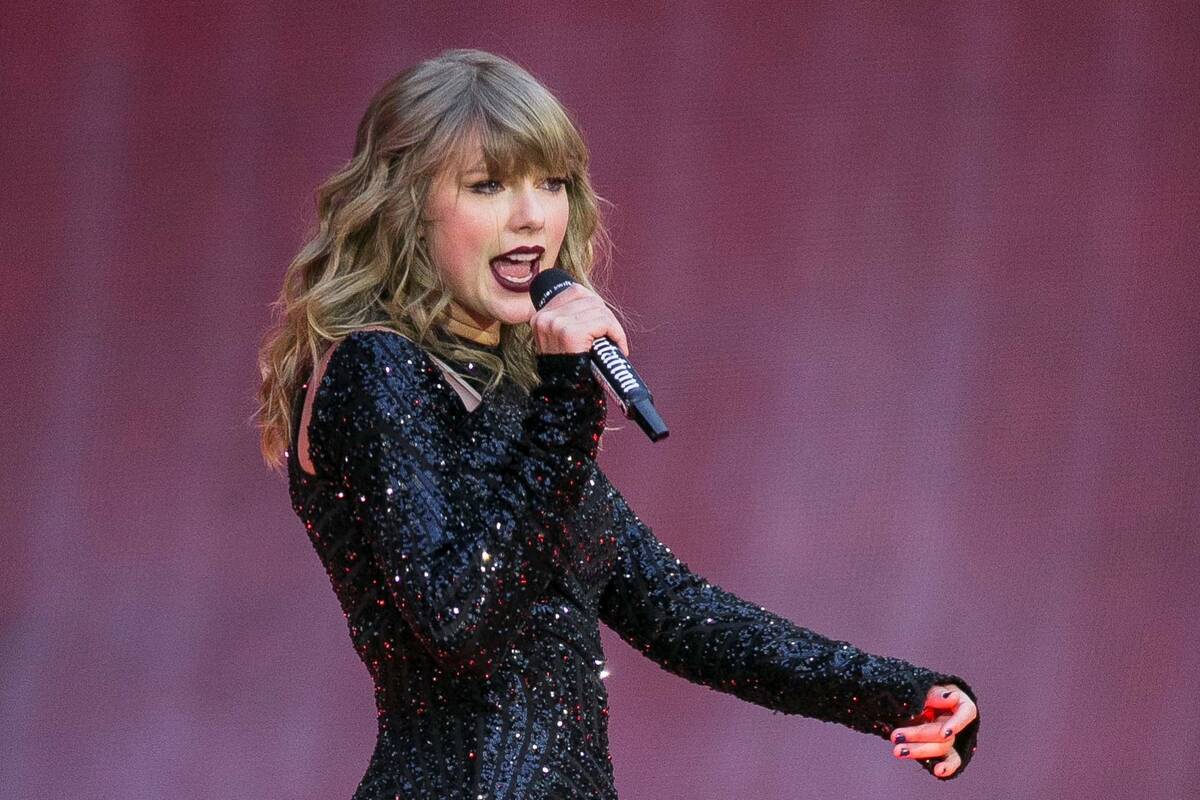 Taylor Swift performs on stage in concert at Wembley Stadium in London in June 2018. (Photo by Joel C Ryan/Invision/AP) 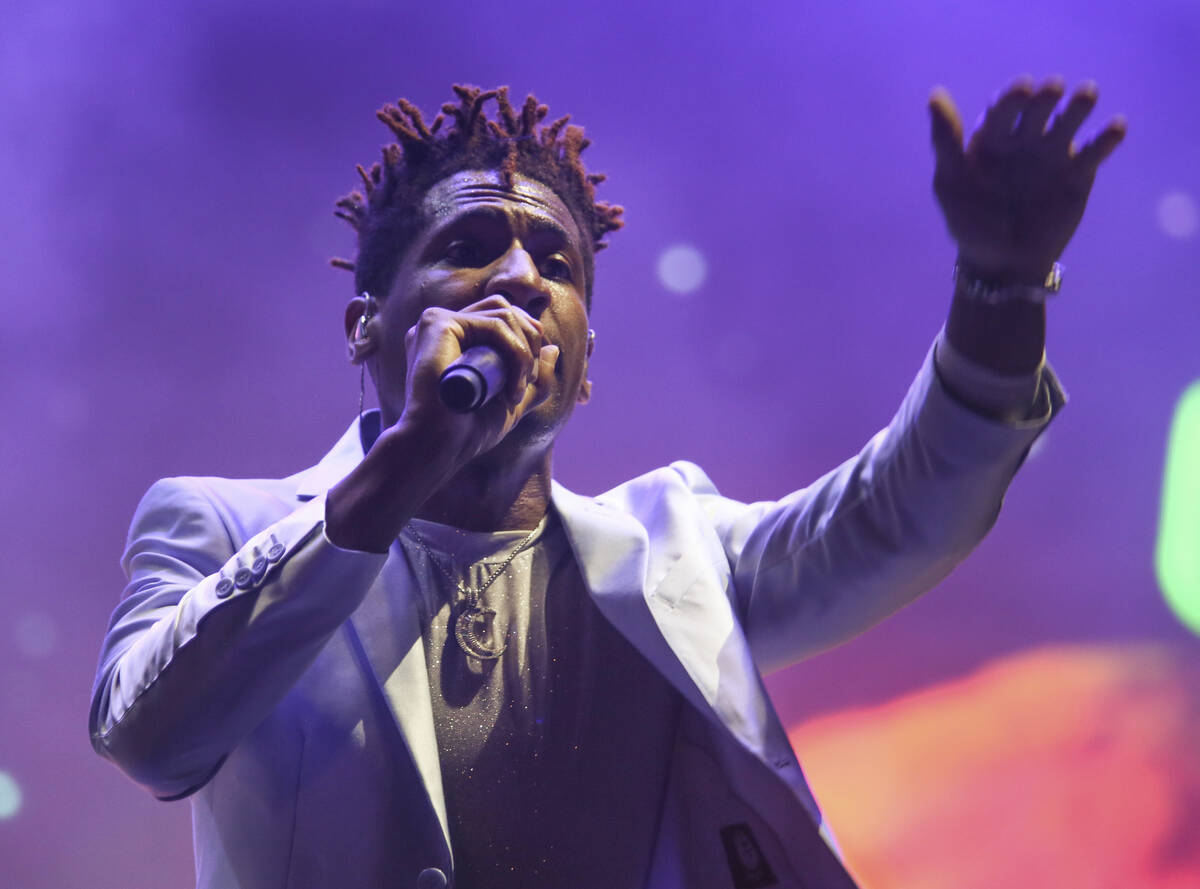 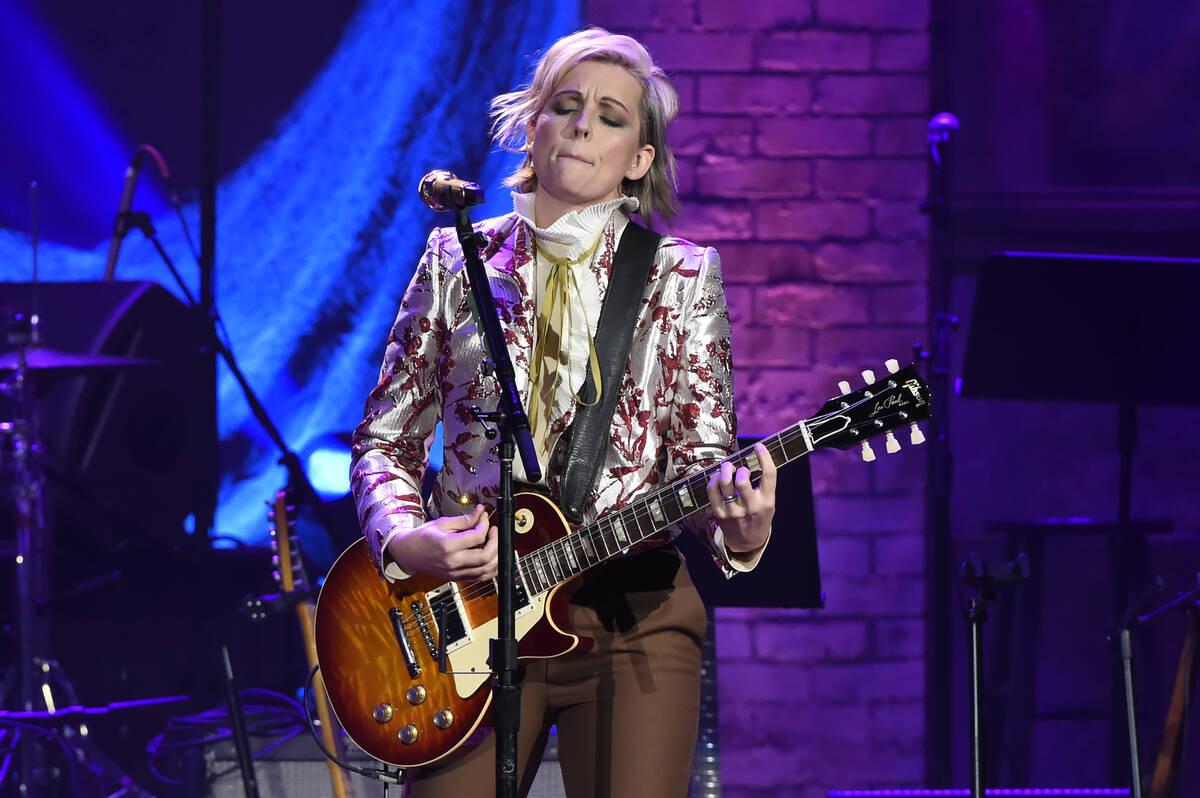 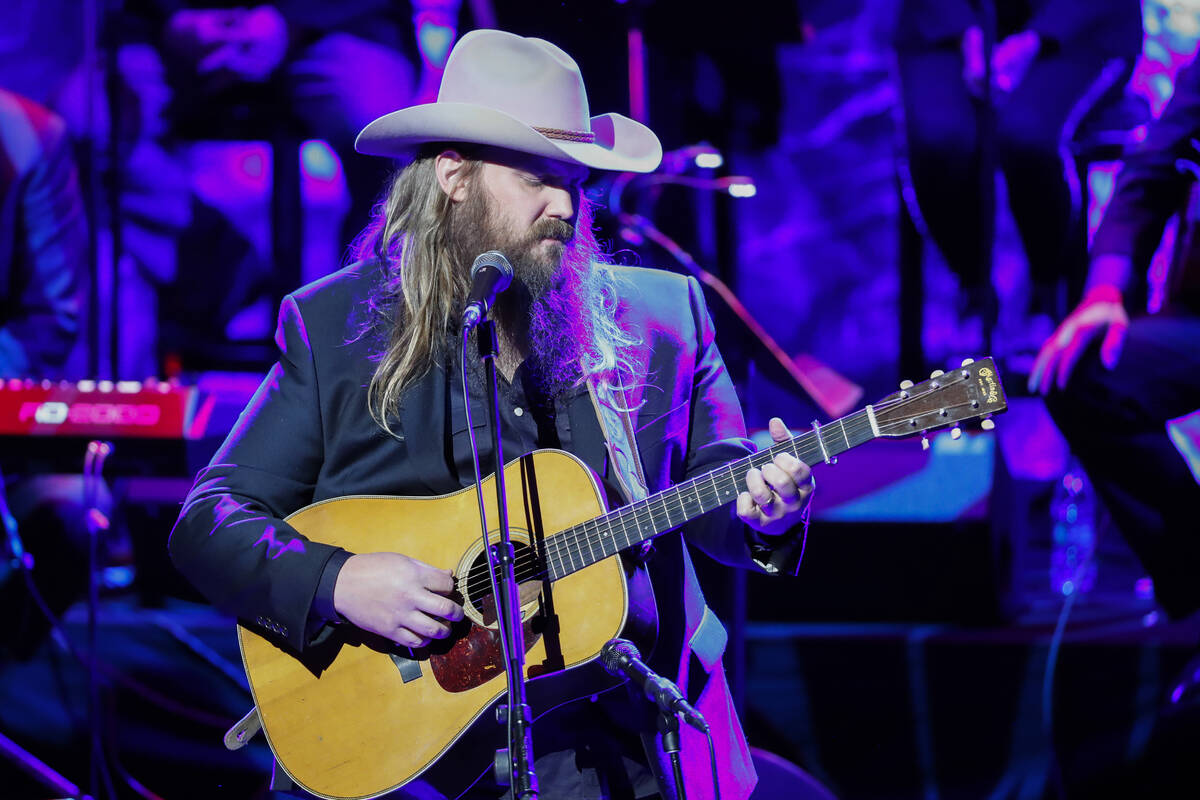 Chris Stapleton performs at the 2018 Medallion Ceremony at the Country Music Hall of Fame and Museum on Sunday, Oct. 21, 2018, in Nashville, Tenn. (Photo by Al Wagner/Invision/AP) 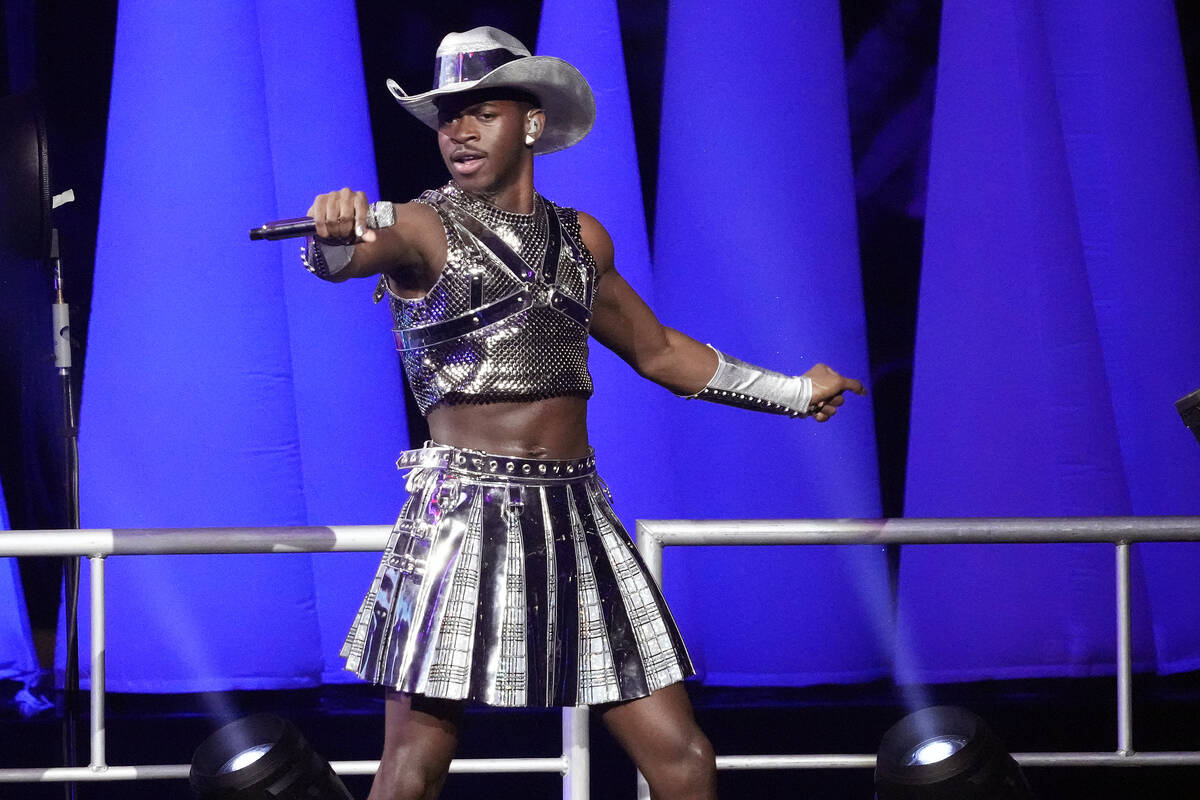 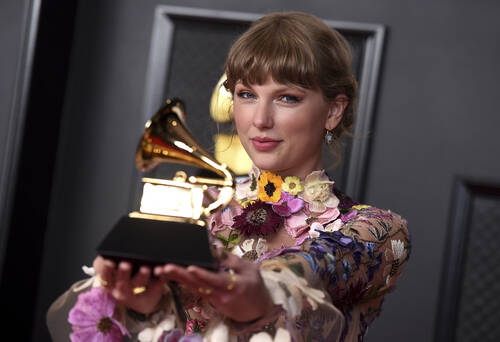 Taylor Swift poses in the press room with the award for album of the year for "Folklore" at the 63rd annual Grammy Awards at the Los Angeles Convention Center on Sunday, March 14, 2021. (Photo by Jordan Strauss/Invision/AP)

The Grammy Awards are coming to Vegas!

Tickets to music’s biggest night are not available to the public — only artists, their handlers, assorted record industry types, publicists, publicist’s assistants, bodyguards, stylists and, most significantly, super important media members like us may attend in person.

Enjoying the show at home with your cat Dolly Purr-ton and this handy guide to the six biggest plotlines of the night:

The Grammys’ bid for more transparency

What The Weeknd wants, The Weeknd gets — third vowel excluded, of course.

Last year, the R&B superstar boycotted the Grammys after his blockbuster 2020 album, “After Hours,” failed to earn any nominations despite being both a critical and a commercial success.

“The Grammys remain corrupt. You owe me, my fans, and the industry transparency …” The Weeknd tweeted at the time.

“Because of the secret committees,” he elaborated in a March 2021 interview with The New York Times, “I will no longer allow my label to submit my music to the Grammys.”

The Grammys have eliminated said groups of “15-30 highly skilled music peers” who voted for the final selection of nominees and replaced them with “a majority, peer-to-peer vote of voting members of the Recording Academy,” according to a news release from said academy.

This is intended to create a more open, transparent voting process.

Will it be enough to make amends with The Weeknd?

That remains to be seen, though the early results aren’t promising: His good buddy Drake withdrew his two 2022 Grammy nominations in December.

Kanye gets the boot

This one makes even more sense after the awards show slap heard ’round the world on Sunday — actually it was muted and censored, but we can read lips, and Will Smith said, ‘You have a fly on your cheek, good buddy!” before smacking Chris Rock at the Oscars.

Originally named a performer for this year’s show, Kanye West was dis-invited after feuding with host Trevor Noah, who called the rapper out on “The Daily Show,” which he also hosts, over his continued harassment of ex Kim Kardashian and new beau Pete Davidson.

Noah was fairly even-handed in his criticism of West — “It touches on something that is more sensitive and more serious than people would like to admit,” he said. “I see a woman who wants to live her life without being harassed by an ex-boyfriend or an ex-husband or an ex-anything.”

West responded by calling Noah a racial slur on Instagram, for which he was subsequently suspended from the platform for a day.

He was then pulled from the Grammys for “concerning online behavior.”

As we’ve learned about West from past award shows — see Swift, Taylor — he’s like the price of Bitcoin: just a tad unpredictable.

Probably best for him to sit this one out.

Speaking of Taylor Swift, will she make history?

Only Stevie Wonder and Frank Sinatra have ever done it, rare talents who’ve accomplished something rarer still: winning album of the year in consecutive years. Ol’ Blue Eyes did it for “September of My Years” and “A Man and His Music” in 1966 and ’67, respectively, and Wonder went back to back in ’74 and ’75 with “Innervisions” and “Fulfillingness’ First Finale.”

She’ll have a shot.

After winning album of the year in 2021 for “Folklore,” Swift is up for the honor again for her ninth studio album, “Evermore.”

It’s her only nomination as an artist this year, but it could prove to be a historic one.

What’s an even greater achievement than leading the field with 11 Grammy nominations this year?

Getting a bebop chestnut like Charlie Parker and Dizzy Gillespie’s “A Night in Tunisia” played live on national television somehow.

That’s what Jon Batiste has improbably done as bandleader of “The Late Show With Stephen Colbert,” where he’s served as one of jazz’s greatest ambassadors, a gateway act to a genre in need of them.

While jazz is at the root of Batiste’s latest record, the R&B-infused “We Are,” it’s not a straight-up jazz record per se — instead it embodies the anything-goes spirit of adventurism inherent in the music, then recasts it in new ways.

And so whether or not “We Are” takes home album of year honors, it feels like jazz is a winner.

He’s got 99 problems — and almost as many Grammy nominations.

With three more nods this year leading to a grand total of 83 for his career, rapper Jay-Z has officially become the most nominated artist in Grammy history, surpassing Paul McCartney and Quincy Jones, whom he was previously tied with.

That’s a staggering number, and yet Jay-Z’s not even the biggest Grammy winner in his own household.

That would be his wife, Beyonce, who’s earned 28.

While no Las Vegas artists are up for Grammys this year — which is only because fez-sporting surf punks Sheiks of Neptune didn’t release a new album in 2021 — there are a number of artists plenty familiar to these parts vying for trophies.

Pop changeling Lady Gaga, a resident at Park MGM, earned five nominations, all for material from “Love for Sale,” her collaborative album with Tony Bennett.

Fellow Park MGM residents Silk Sonic, the insistently funky pairing of Bruno Mars and Anderson .Paak, received four nominations, including one for record of the year.

And then there are the Foo Fighters, who’ve teased a residency at Park MGM and who are in the running for best rock performance and best rock album.

The group was also scheduled to perform at this year’s ceremony, but after the death of drummer Taylor Hawkins at age 50 last week, it canceled all upcoming performances.