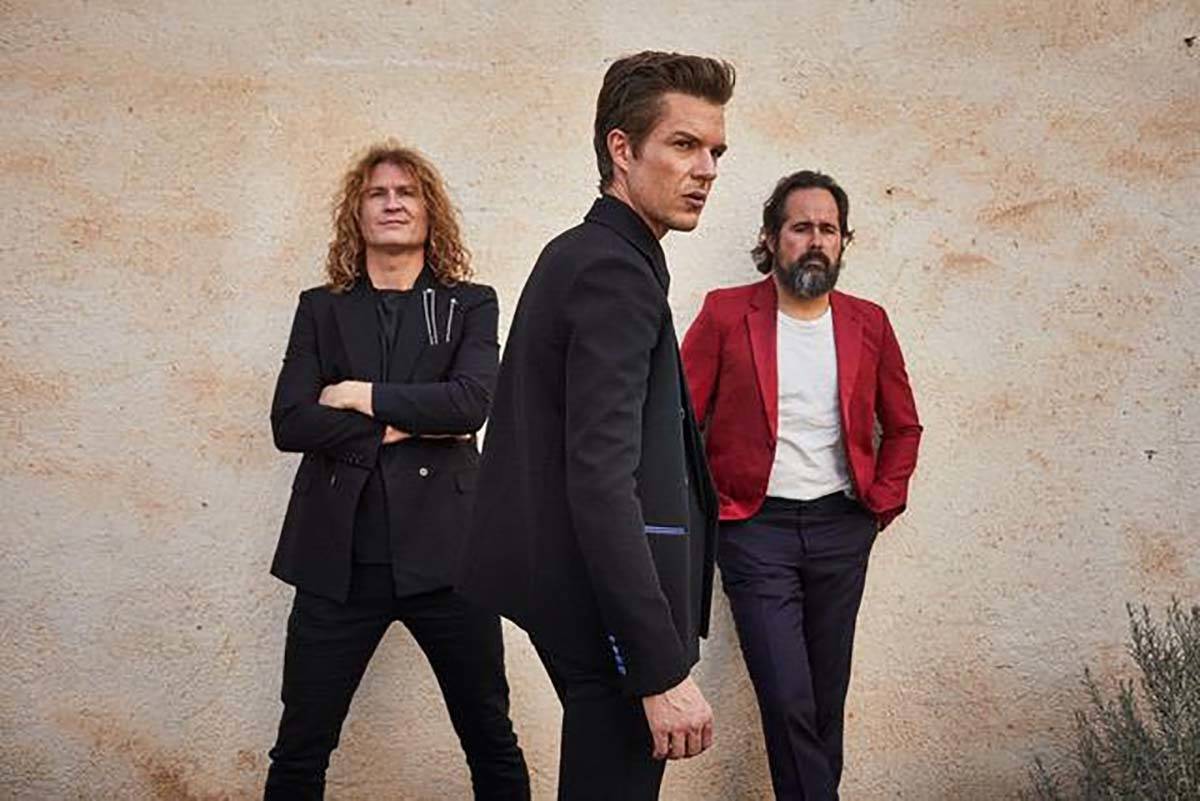 Everybody knows about the train.

“You hear it constantly,” a native notes during a recorded interview.

That train represents many things: the industry that’s the beating heart of this place, the Jones Rubber Plant, where all the guys end up; a way of out here; and, for some, a way of out of something else.

“Every two or three years the train kills somebody…” the man continues on the recording, which serves as the intro to the second cut from The Killers’ new album, “Pressure Machine,” which drops Friday. “I think the train is a way to find your way out of this life if you get hit by it.”

And with that, the snippet ends, the synth chimes in, drums thunder, guitars growl and Brandon Flowers elaborates:

“A couple of kids got hit by a Union Pacific train / Carrying sheet metal and household appliances through the pouring rain,” he sings. “They were planning on getting married after graduation / Had a little baby girl / Trouble came and shut it down / Things like that ain’t supposed to happen / In this quiet town.”

This quiet town: Nephi, Utah, population 5,400, nestled in the central part of the state, about a 40-minute drive south of Provo.

Flowers spent a half-dozen of his formative years there, from age 10-16.

“When I first met Brandon, he said he lived in Nephi,” Killers drummer Ronnie Vannucci recalls in a Zoom chat, shirtless, wearing a NASA hat. “And I was like, ‘I know that town. There’s a Taco Time there.’ And he goes, ‘Oh, yeah, I used to work at that Taco Time.’

“It might have been one of our first conversations,” he continues. “It’s interesting to see how the planet of Nephi has continued its orbit within our lives.”

He equates it to staring down the barrel of a gun pointed at him and his band.

“It was a different feeling,” Vannucci begins. He’s talking about getting the creative process going in the mouth of a pandemic.

Last summer, The Killers released their sixth album, the kaleidoscopic “Imploding the Mirage,” with much of the world shut down, basically. And so instead of going on tour, they returned to the studio.

“When we were grounded back towards the end of March, our knee-jerk reaction was, ‘Oh, OK, let’s just pick up the pieces and keep going with the flair of this record,’” Vannucci recalls of carrying on with the invigorated vibe of “Implosion.” “And then things got really, really dark. There’s stay-at-home orders and there were people dying.

“We were sort of realizing what this thing was,” he continues, “and it was more of a beast than we thought. It was spinning us; it was sort of putting us in this mood. It was throwing us into different characters, almost.”

It all begat a burning question: “How are we going to try to make a similar-sounding record when — all of a sudden — the sky’s falling for everyone?” Vannucci wonders.

The answer? Make something totally different instead.

“Brandon said to me one day, ‘This is reminding about being isolated in Nephi,’” Vannucci remembers. “And then he got to thinking about the town he was living in, and decided to jot down these poems, basically, and we built the songs around these poems or lyrics.

“We decided to embark on that sort of journey,” he continues, “that challenge to make a record like this, to make it differently — because everything was different. I think we went about it in the most honest way that we could.”

The album opens with the sheriff kicking the door down.

“They got me for possession of them hillbilly heroin,” Flowers sings on “West Hills,” giving voice to a hard-luck character in a haunting elegy flecked with fiddle and cello that sets a portentous tone for the 10 songs that follow.

“There’s a lot of opiods going around,” a Nephi local says in a taped snippet that prefaces the equally searching and stirring “In Another Life.” “It makes you feel pretty damn good. After a few hours, you’ve got to take more. And then after awhile you’re taking a ton and you don’t feel great.”

“Pressure Machine” explores this shift in the American ideal, where small towns were once seen as tight-knit safe havens from big city ills, but are now often wracked by the kind of drug abuse that can consume an entire community.

There’s a duality inherent small town living: some find comfort in a setting where everyone knows everyone else; others find it suffocating, limiting, catalyzing a natural-born restlessness.

“Pressure Machine” is filled with characters rife with a sense of longing, of wanting something more, of feeling mired in these “quicksand streets” or chafing against a “barbed wire town of barbed wire dreams.”

There are two-timing husbands, murderous cops and discontented factory workers in these hills, many of them yearning for a past as a way of steeling themselves against a grim future.

Sonically, these songs largely eschew the bombast of past Killers albums, favoring an earthier, Americana bent that The Killers have touched on previously, but dig into more deeply here with mandolin, pedal steel and harmonica flourishes.

Of course, there are still fist-in-the-air moments to be had — “In the Car Outside” roars like an engine being revved — especially with guitarist Dave Keuning returning to the fold after skipping the “Imploding the Mirage” sessions, earning a couple writing credits and laying down a particularly fiery solo on “Cody.”

For a band with an acknowledged fondness for Bruce Springsteen — and it’s mutual, hence Springsteen’s recent collaboration with The Killers on a version of their “Day & Age” single “Dustland Fairytale” — “Pressure Machine” mines a vein similar to Springsteen’s lo-fi masterpiece “Nebraska,” a stripped-down album of first-person narratives documenting lives of desperation, of blue-collar frustration.

As with Nephi itself, though, there’s beauty amid the bleakness here, with Flowers chronicling young love’s maturation on “Runaway Horses,” a blood-warming acoustic duet with Phoebe Bridgers, while capturing the magic of changing seasons on “Sleepwalker.”

“Don’t you miss the way / Wildflowers paint the western hills?” he sings on the latter.

About all those nterview snippets…

The idea came to them when they were mixing the record.

Credit co-producer Shawn Everett. “We were all commenting on how this is just like a documentary, it’s a musical version of a documentary,” Vannucci says of “Pressure Machine.” “It was almost journalistic, telling stories — and they were true stories — and we’re fitting music around them.

“Sean came in the next morning,” he continues, “and goes, ‘I was just listening to NPR, ‘This American Life,’ and somebody put a tape recorder in a diner and just let it roll, and we got to hear all these interesting conversations. You guys should go out to Nephi, you should bring a tape recorder and record people and interview them. I was like, ‘Yeah, that would be awesome.’”

Of course, The Killers being one of the biggest rock bands in the world, it wouldn’t exactly work if they showed up and started chatting up the locals themselves. So they hired a professional to do it.

“One day, they just went out, interviewed people about the town, and we sifted through hours of audio to find these snippets to get to the stories,” Vannucci says. “It wasn’t hard. There was so much gold in the audio captured from that one day in Nephi. You really get a sense of the town through these stories and the accents, the diction and the way people enunciate, even. It helps thread the record together.”

It also another layer of realism to the album.

“Even though this is about a small town in Utah, it really can be applied about your town, it can be about where you live or your situation,” he says. “I think more what it’s showcasing is that, small town or big city, you still have your ups and downs.”

Like “Nebraska,” “Pressure Machine” ends with a measure of hard-bitten hope.

“So put another day in, son,” Flowers sings on “The Getting By,” delivering the album’s final line. “And hold on ‘til the getting’s good.”

Then comes the sound of that train.