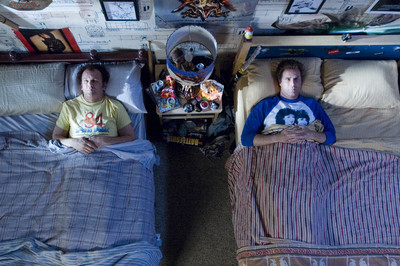 As a dedicated reporter, it’s my job to report that a local preview screening of "Step Brothers" earlier this week was packed to the gills with people laughing their heads off. (To be strictly accurate, "heads" is a family-newspaper euphemism for a different, somewhat less dignified portion of the human anatomy.)

As a dedicated movie critic, however, it’s my sacred duty to add that I don’t understand why in the hell they were laughing so hard.

Yes, "Step Brothers" is full of rude, lewd, crude humor. And no, I didn’t find the majority of it the least bit amusing, let alone bust-a-gut uproarious.

That ranks as a major disappointment, considering the two goofballs portraying the title "Step Brothers" — Will Ferrell and John C. Reilly — are usually good for at least a few laughs.

They certainly were in "Talladega Nights," with Ferrell as NASCAR champ Ricky Bobby, the "Shake" to Reilly’s perennial-runner-up "Bake" Cal Naughton Jr.

In "Step Brothers," however, they’re basically playing the same character. And while too much of a good thing may be wonderful (just ask Mae West), too much of an annoying thing is simply more annoying.

And in "Step Brothers," the title characters are nothing if not annoying.

Identical cases of arrested development, they’re both 40-year-old unemployed screw-ups who still live with their incredibly indulgent parents — Brennan (Ferrell) with his divorced mother Nancy (Mary Steenburgen), Dale (Reilly) with his widowed father Robert (Richard Jenkins), a doctor who’s dying to retire from medicine and devote the rest of his life to his beloved sailboat.

That is, until Robert meets Nancy at a medical conference and the two fall in instant lust.

Cut to the happy couple’s marriage, during which their two grown-up boys sulk like cranky toddlers.

Their mutual hostility rises to ever more toxic levels, however, when Nancy and Brennan move in with Robert and Dale, forcing the sudden stepsibs to share a room — and fend for themselves while their parents play newlyweds.

All Brennan and Dale have to do is check out their attire — Brennan’s "Star Wars" jammie pants, Dale’s Yoda T-shirt (and Chewbacca mask) — to know they’re instantly, utterly compatible. (They even sleepwalk alike.)

But they’re too busy playing malicious pranks in a seemingly endless (at least it feels that way) game of one-upmanship to notice, whether they’re firing off four-letter putdowns or engaging in elaborate childish pranks they’ve been practicing since their actual childhoods.

Naturally, their asinine behavior prompts their newly married parents to react with equal abandon, setting off another round of laugh-riot reaction as veterans Steenburgen (who co-starred with Ferrell in "Elf") and Jenkins (a long way from his poignant, Oscar-caliber performance as "The Visitor") are forced to stoop to their level. And that’s a long way down.

It’s only when Brennan’s obnoxious, overachiever brother Derek (the spectacularly smarmy Adam Scott) shows up, repressed wife (a game-for-anything Kathryn Hahn) and harmonious kids in tow, that Brennan and Dale find they’re natural allies — and brothers at heart as well as in arms.

At least until Brennan and Dale’s best-buds-for-life routine wears out its welcome, setting the stage for another round of inevitable plot moves. (I’d call them twists, but they’re too straightforward and predictable for that.)

Throughout, "Step Brothers" emits the unmistakable whiff of goofy guys goofing around — and presuming that whatever cracks them up will do the same for audiences.

In this case, the goofy guys are Ferrell, Reilly and "Step Brothers" director Adam McKay, Ferrell’s old pal and ex-"Saturday Night Live" collaborator, who also co-wrote and directed "Anchorman" and "Talladega Nights." (To say nothing of the short "The Landlord," starring McKay’s toddler daughter Pearl, a smash on Ferrell and McKay’s Funny or Die Web site.)

They’re funny enough to score a few mild hits (for example, the stepbrothers’ desperate antics while trying to scare away couples thinking of buying Richard’s house), but it’s nothing we haven’t seen before — and better.

The same goes for Ferrell and Reilly. They may share a fearless, anything-for-a-laugh abandon, but the doofus deadpan chemistry that made "Talladega Nights" such a hoot has all but vanished, replaced by a strident obnoxiousness bordering on desperation.

Cast these guys in a new version of "The Odd Couple" and they’d undoubtedly strike some out-there comedic sparks. Of course, "Odd Couple" author Neil Simon knows that you need contrast to create comedy. And in "Step Brothers," there’s not enough of either.