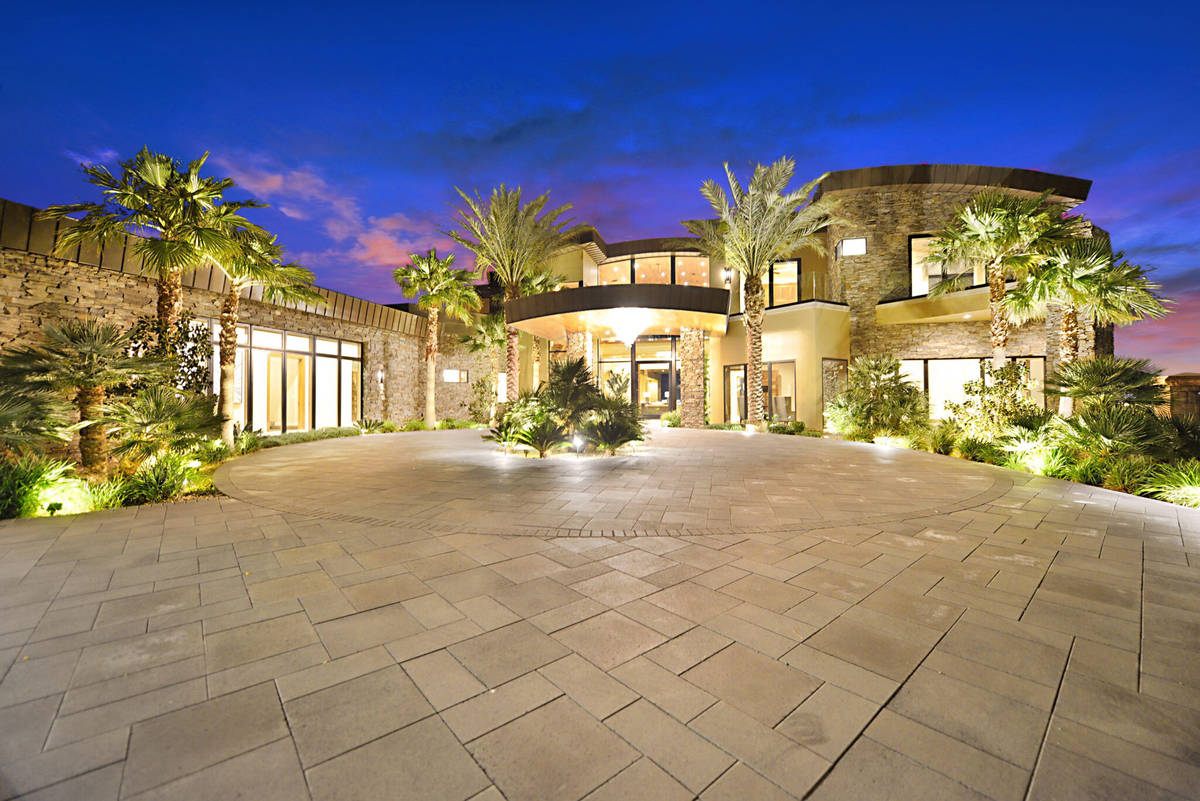 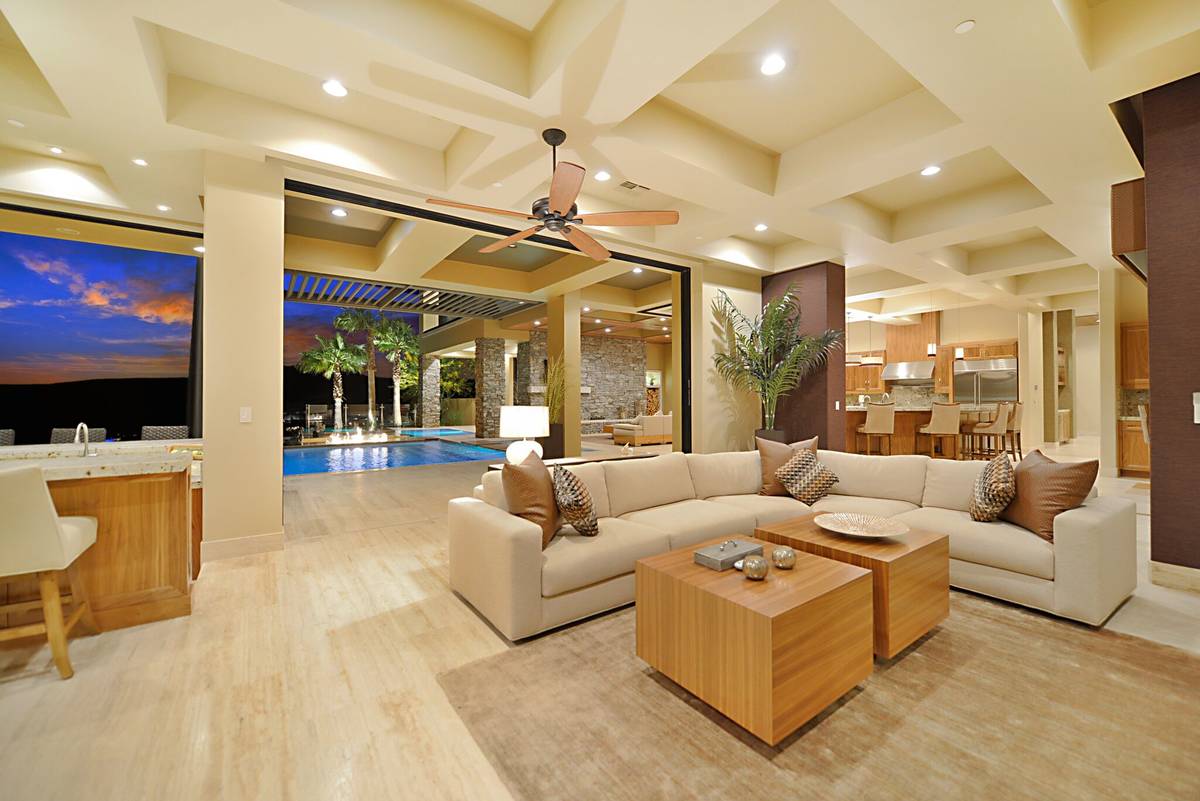 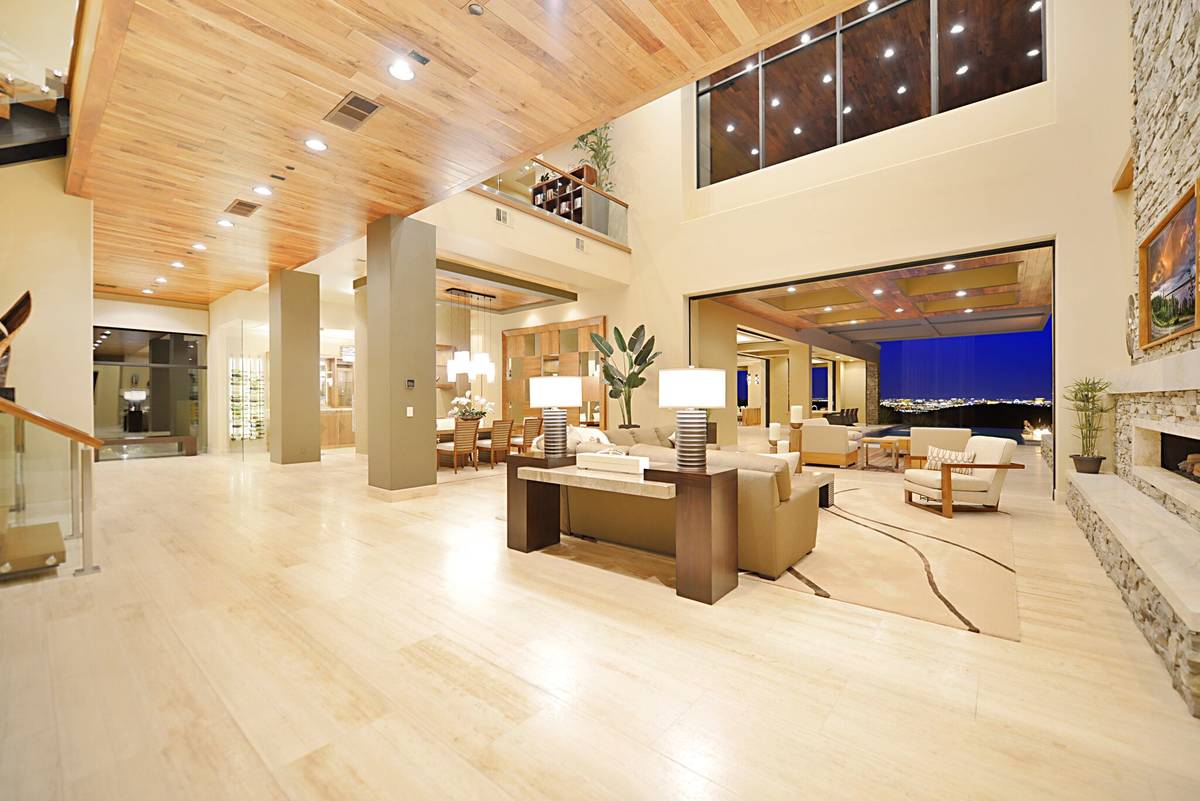 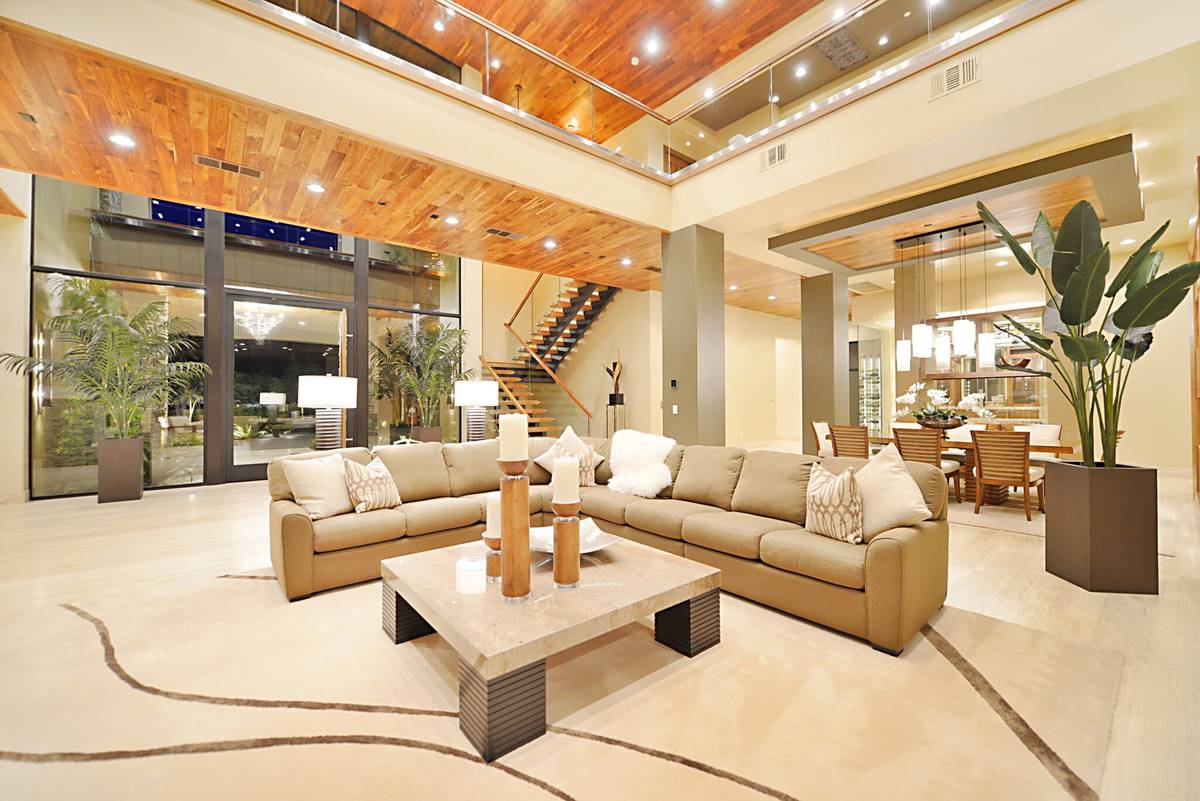 The home has all the upgrades and luxury features. Travertine tile runs from inside to outside in the front and rear of the home. (Luxurious Real Estate) 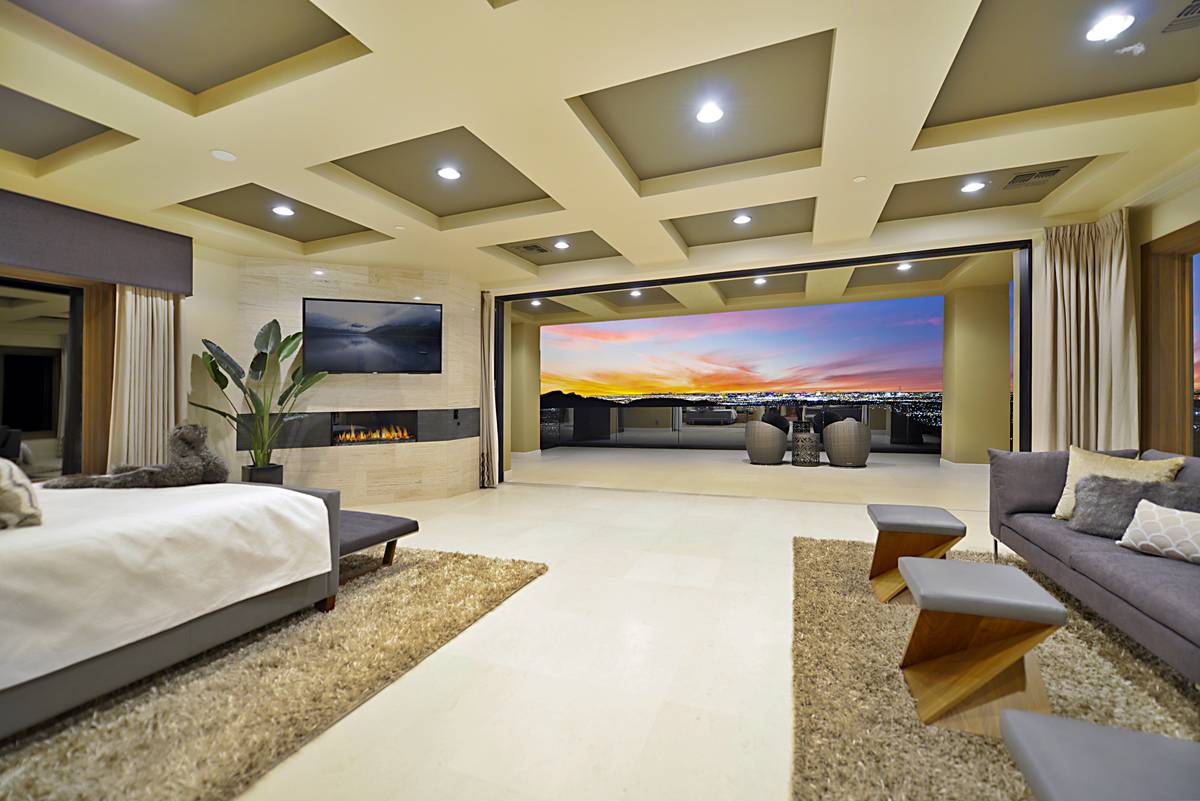 The upstairs master suite features a disappearing wall that allows for sweeping views of the Las Vegas Strip. Every bedroom has its own private suite, and those on the second floor have a private terrace. (Luxurious Real Estate) 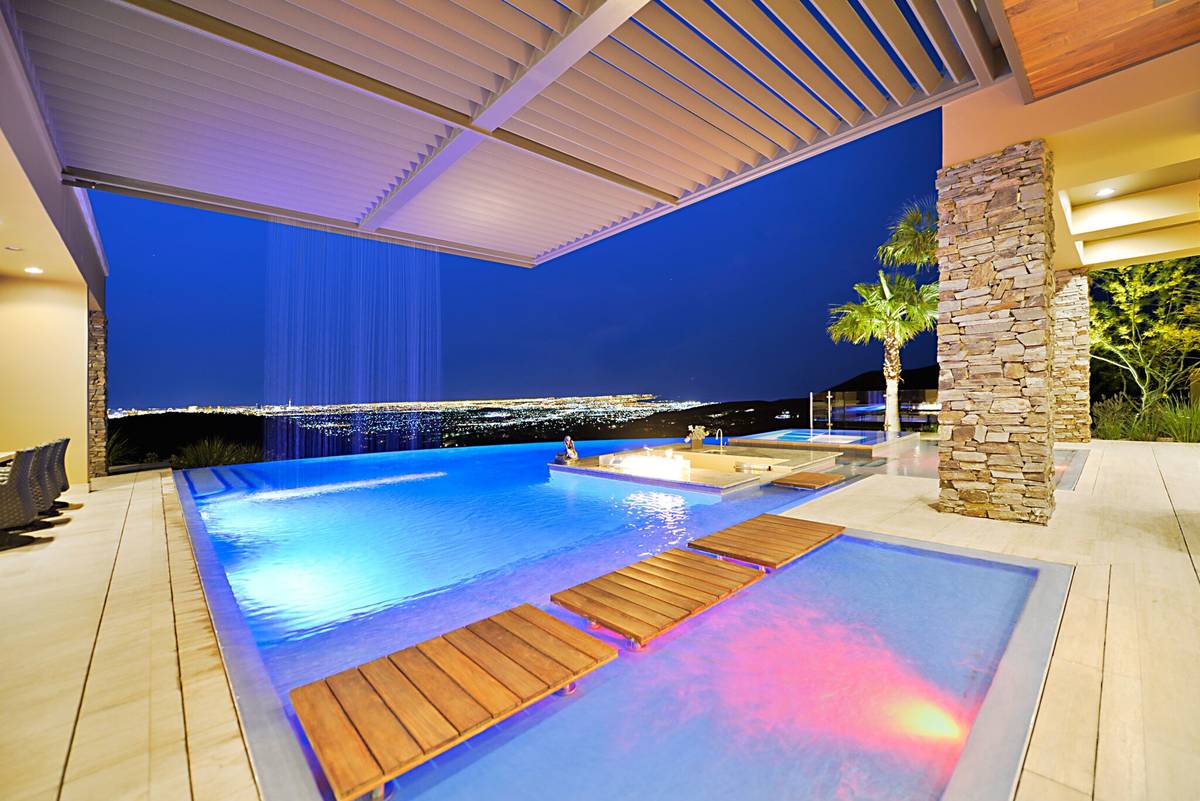 The MacDonald Highlands home has an infinity-edge pool and five-car garage and unobstructed views of the valley. The pool has a 14-foot cascading waterfall with a sunk-in bar area. (Luxurious Real Estate) 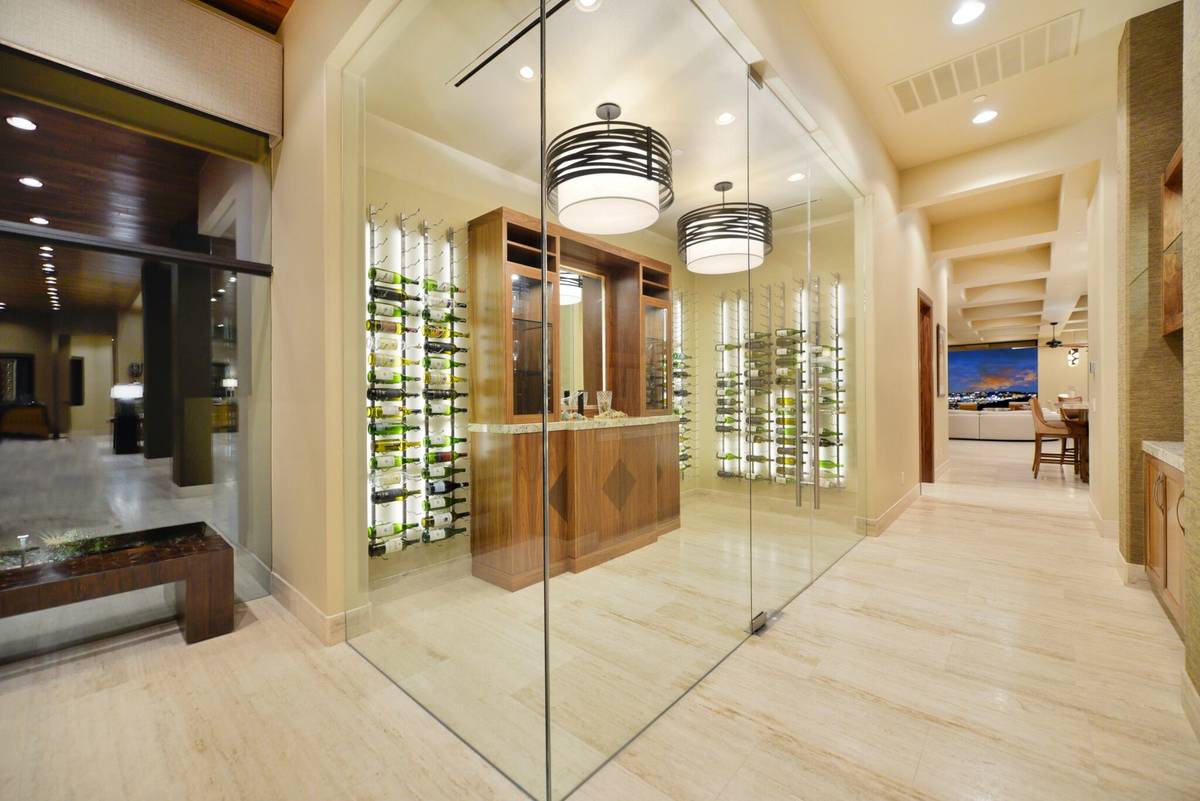 The luxury home has a lot of special spaces, including a wine cellar. The back of the home has full-pocket glass walls. Walnut runs throughout the house. (Luxurious Real Estate)

The CEO of Monster Inc. has sold his Henderson home for $7 million as the luxury market sets a record despite the coronavirus pandemic. That’s the third-highest price paid for a valley home this year.

Noel Lee had bought his home at 731 Dragon Ridge Drive in MacDonald Highlands for $7.75 million in May 2018.

The 71-year-old Lee is a San Francisco native who founded Monster in 1979 after he invented loudspeaker cables in his garage.

Lee’s former home is part of a triple-gated compound estate on 1.1 acres in the foothills above DragonRidge Country Club. Built in 2015 by Sun West Custom Homes, it measures 11,375 square feet with six bedrooms and nine bathrooms. The sale closed Oct. 16.

The two-story home, serviced by an elevator, has two master suites, office, game room, fitness room, wine cellar and theater. It has an infinity-edge pool and five-car garage and unobstructed views of the valley. Every bedroom is its own private suite, and those on the second floor have a private terrace. Travertine tile runs from inside to outside in the front and rear of the home.

“The views are what set it apart from everything else,” said Darren Melton of Luxurious Real Estate, the listing agent. “There is nothing like it in the $7 million to $8 million space in greater Las Vegas that’s available.”

The pool has a 14-foot cascading waterfall with a sunk-in bar area. The back of the home has full-pocket glass walls. Walnut runs throughout the house.

Melton said Lee, who also owns a home in California, sold the home because he is looking to downsize to a smaller luxury home in Las Vegas. He also owns a condo at The Cosmopolitan.

Chase Gentry with eXp Realty was the buyer’s agent for a Southern California couple who are relocating their marketing company to Las Vegas.

In 2020, the two highest sales are $11.25 million for a MacDonald Highlands mansion owned by gaming icon Diana Bennett and $10.15 million for an elevated mansion in The Ridges in Summerlin.

There were 96 sales of $1 million or more with properties on the Multiple Listing Service in September in what Realtor Forrest Barbee, corporate broker with Berkshire Hathaway HomeServices Arizona, California, Nevada Properties, said is a one-month record for Las Vegas. The previous high was 74 in May 2019.

Barbee said the luxury market is carrying the existing-home market as a whole. Overall, the number of single-family home sales in the MLS is down 5.6 percent in 2020, he said.

The luxury market shows no signs of slowing. There were 160 pending sales at the end of September with seven months of inventory, according to Barbee.

“This is like a smoking record,” Barbee said. “This whole luxury thing I am seeing in (the Phoenix area) and Orange and Riverside counties. The people who have that kind of money are buying. Some may be getting out of the stock market. Some say they love their home, but it’s old. A lot of people are trading up because they woke up and realized the house that was the right size isn’t with everybody and the dog at home.”

Barbee said what people are seeking in a home has changed with a desire for more office space and flex space. It would cost too much to renovate and add space than buying another home, he said.

The median price of luxury homes sold in September was $1.45 million. The average price was $1.83 million, Barbee said.

Melton said that there continues to be a high level of interest from Californians and residents of other states and that there has been more in the $3 million-plus range than he has ever seen.

“There’s a number of people doing it for business purposes,” Melton said. “Some people are relocating because they’re telling us they’re getting away from some of the chaos from the states they are coming from, whether that’s Florida, California, Illinois, New York, Oregon and Washington state.”

Melton said he has sold homes to people who have been given the green light from their companies to work from home. One person who worked for Microsoft in Washington and another from stamps.com in Southern California relocated to Las Vegas to work from home, he said.

“A lot of that is driving the increased demand over the last 120 to 150 days,” Melton said.

Melton represented the buyer in the second-highest price paid for a home in August at $5.3 million in MacDonald Highlands. The buyer was Earl Weinman, the chairman of Propper International, a military apparel company.

“He never came to town,” Melton said. “I did that all via Facetime video chat and correspondence without him stepping foot in Nevada.”

Barbee said that “the floodgates from California have opened. The political mess over there is far worse than the political mess we got. People can’t get over here fast enough. It shows you nothing is ever as bad as you think it’s going to be, and this case it’s much better than we expected at this point.”

“The rest of the year is looking mighty strong,” Jensen said.

Jensen said newer homes or remodeled homes are getting a premium because buyers don’t want to do it themselves.

Anthony Spiegel, a broker salesperson with the Ivan Sher Group with Berkshire Hathaway HomeServices, Nevada Properties/Luxury Collection, said the luxury market in Las Vegas was ahead of the 2019 pace for the first three months of 202o. The COVID-19 pandemic forced a shutdown of the economy, and sales slowed a bit, but it bounced back with a vengeance in July.

Spiegel said the main explanation comes from California buyers who had been aggravated by high taxes for many years but wouldn’t leave because of the lifestyle, including living next to the Pacific Ocean. They didn’t want to be inconvenienced by moving to a more tax-friendly state such as Nevada.

“Those who could afford to live in Los Angeles or San Francisco and other places in California opted to do so even though they could save an additional 14 percent of their income,” Spiegel said.

“What happened during the COVID pandemic was things changed. California has created some challenges financially but culturally that are forcing people to leave. We have seen a massive influx of buyers from California that we didn’t see before, and we didn’t see before because culturally they were accepting where they lived. They are seeing homeless, violence and unrest. I have clients saying the National Guard is outside of my office, and I work on Rodeo Drive. Or, I have homeless camped outside my home, and the police are saying they can’t do anything about it.”

That is especially true for the ultra-wealthy, Spiegel said. That group looking at Las Vegas says that it is not an issue about money on where they live. They wanted Malibu or Carmel no matter what it cost them, he said.

They are looking at The Summit Club, the resort community in Summerlin, paying multimillions of dollars for lots and paying $1,500 to $2,000 a square foot for construction, Spiegel said.

For other buyers, those who can now work from home, they want more space, Spiegel said. Many didn’t mind having a 1,500 square-foot condo in San Francisco when they didn’t spend a lot of time there, he said.

“If you are working from your home, you want an office and space to stretch your legs,” Spiegel said. “You want a backyard and all of these things you didn’t have before.”