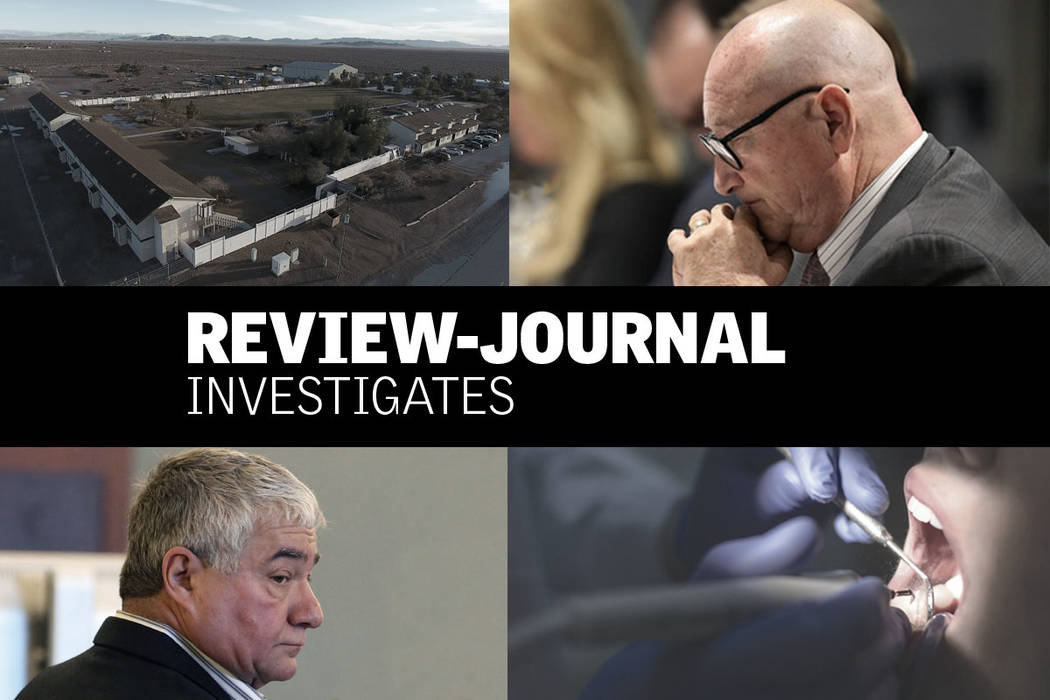 Composite photo for the watchdog stories of 2019.

The Review-Journal’s 2019 investigative stories prompted criminal charges against tourism officials, the removal of state employees and board appointees who provided lax oversight, and more compliance with a lobbying disclosure law. Our stories exposed systemic failures and corruption that officials wanted hidden.

In 2020, we’ll continue to deliver reporting that holds leaders and agencies accountable and reveals wrongdoing in our communities.

Here is the top investigative work from our newsroom in 2019:

What we found: The Nevada Board of Dental Examiners repeatedly failed to revoke the licenses of dentists who injured patients, and nearly half the board had faced allegations of unethical conduct. The board also violated the state open meeting law.

The impact: Less than two weeks after the series ran, three dental board members resigned, the governor decided not to reappoint three others whose terms had expired, and the board fired the executive director and general counsel. Six new board members have been appointed.

What readers said: Readers flooded the newspaper with their own stories of the dental board’s failures, saying the board is more interested in protecting dentists than patients. “You report and the earth opens up, swallowing the bad guys. Thanks for the great job.”

The impact: An internal audit prompted by the R-J’s investigation resulted in criminal charges against the agency’s CEO and three others. LVCVA board members tightened controls over travel and approved new ethics rules that ban members from accepting gifts.

What readers said: “I want to thank you & the RJ for doing your job — ‘gathering facts & shining a light on government officials’ that are corrupt, greedy, & unethical. Please stay on top of these crimes against the hardworking taxpayers, exposing as many of them as possible.”

“Just wanted to let you know that many of us are following your coverage of the LVCVA thievery with considerable interest and approval.”

What we found: Las Vegas Councilwoman Michele Fiore spent $33,000 in taxpayer money to travel to Europe, Asia and South America for the agency, but she had trouble justifying what taxpayers got in return for the expenditures.

The impact: After publication, the agency board reversed a policy requiring board members to take one trip a year. Now it only allows board member travel if the member has specific expertise that’s vital for a trip.

What readers said: “This has to stop! Wasting our tax dollars. Total shame.”

What we found: Despite changes in eviction laws, Nevada is the only state that allows judges to automatically grant evictions without notifying tenants they have a court case filed against them. And businesses with large numbers of rental houses, especially companies with housing inventories bought after the 2008 housing crash, evict tenants at rates higher than the Las Vegas Valley average for single-family rentals. One company faced allegations that it rented neglected homes and provided subpar maintenance and repairs.

What readers said: “Thank you for exposing these entities. I own a property management company and I can tell you fraud, theft and malpractice is systemic.”

Reporting: Deserted in the Desert

What we found: For years, state officials knew about abuse and neglect allegations at Northwest Academy, an Amargosa Valley boarding school, but did nothing to stop the abuse.

The impact: The state Department of Health and Human Services, which licensed Northwest Academy as a child care facility, conducted a “root cause” analysis, which later substantiated many of the Review-Journal’s findings, including a lack of formal policies requiring interagency communication about ongoing issues at facilities they oversee. The married owners of the private boarding school for “troubled youth” were arrested on suspicion of child abuse and neglect and the school closed. The owners face 45 counts each of child abuse.

Reporting: Your right to know

What we found: Nevada residents who want insight into the workings of their government agencies often are thwarted by hefty fees and long delays when seeking public records.

The impact: The Legislature amended the public records law in 2019 to reduce fees, add civil penalties for noncompliant government agencies and tighten rules on how agencies must respond to requests.

The impact: Lobbying firms filed more than 100 overdue disclosure forms for the past year after the Review-Journal asked them about the missing paperwork. County Commission Chairwoman Marilyn Kirkpatrick said the county will now strictly enforce the long-standing law.

What we found: The former head of the Department of Motor Vehicles left the state to work for Tech Mahindra, which won a contract to modernize the state’s computer system, but the revamp failed, costing drivers more than $26 million in squandered registration fees. The Review-Journal successfully unsealed a lawsuit alleging DMV employees sabotaged the revamp in an attempt to obtain bribes.

The impact: The investigation continues as the Review-Journal seeks records about the attorney general’s evaluation of the corruption allegations.

What readers said: “I was shocked that it took over a year for this to make the news but I’m glad its out in the open. It was/is wrong on so many levels.”

“It made me think, how much … this incompetency cost drivers in penalties and tickets?”

Reporting: Henderson mayor spends big even though she’s not on the ballot

What we found: Henderson Mayor Debra March used campaign funds for restaurants, gasoline and a trip to Panama.

The impact: March reimbursed her campaign for expenses related to the Panama trip and called on the Legislature to strengthen and clarify campaign finance laws. Senate Bill 333 was introduced in the spring of 2019, requiring anyone who gives $1,000 or more to any candidate or political action committee to report their donations to the Nevada secretary of state’s office if the check is cashed. The bill died in committee.

What we found: Las Vegas City Councilwoman and mayor pro tem Michelle Fiore, who was elected to the council in June 2017, spent nearly $200,000 from campaign and political action campaign funds on gasoline, Uber rides, travel, restaurant and grocery store tabs, furniture and her own businesses, records showed. Fiore denied any wrongdoing, explaining that the money went toward unprecedented community outreach and other official duties.

What we found: Henderson Constable Earl Mitchell repeatedly used county money at casinos, restaurants and for trips to visit his children.

The impact: Mitchell was indicted in late 2018 after the RJ exposed the spending and pleaded guilty to a gross misdemeanor in July. Prosecutors dropped five felony counts, but Mitchell had to repay more than $80,000 in misspent funds.

What we found: During the Oct. 1, 2017, Route 91 Harvest festival shooting, spotty radio coverage made it difficult and sometimes impossible for police officers inside Mandalay Bay to communicate on their radios, records show. Two years after the Las Vegas massacre, resort properties on the Strip are still dotted with dead zones that make it impossible for first responders to communicate on their radios.

Reporting: One in 14 state inmates are undocumented immigrants, and a fifth of them are repeat offenders.

What we found: About 1,000 inmates in Nevada prisons are not in the country legally and about one-fifth of those are repeat offenders. We found repeated instances of prisoners released to commit additional crimes without being deported.

The impact: The acting director of Immigration and Customs Enforcement sat down with the Review-Journal for an exclusive interview after the story ran but conceded the agency can do little without change at the federal level.

What readers said: Readers were outraged that ICE was unable to keep undocumented repeat felons out of the country or failed to deport them after their first crimes.

For continuing watchdog news, sign up for our new RJ Investigates monthly newsletter.