The windows are bathed in green from within the Keep Memory Alive Event Center designed by renowned architect Frank Gehry at the Cleveland Clinic Lou Ruvo Center for Brain Health in Las Vegas. The center will celebrate the 10th anniversary on July 11, 2019. 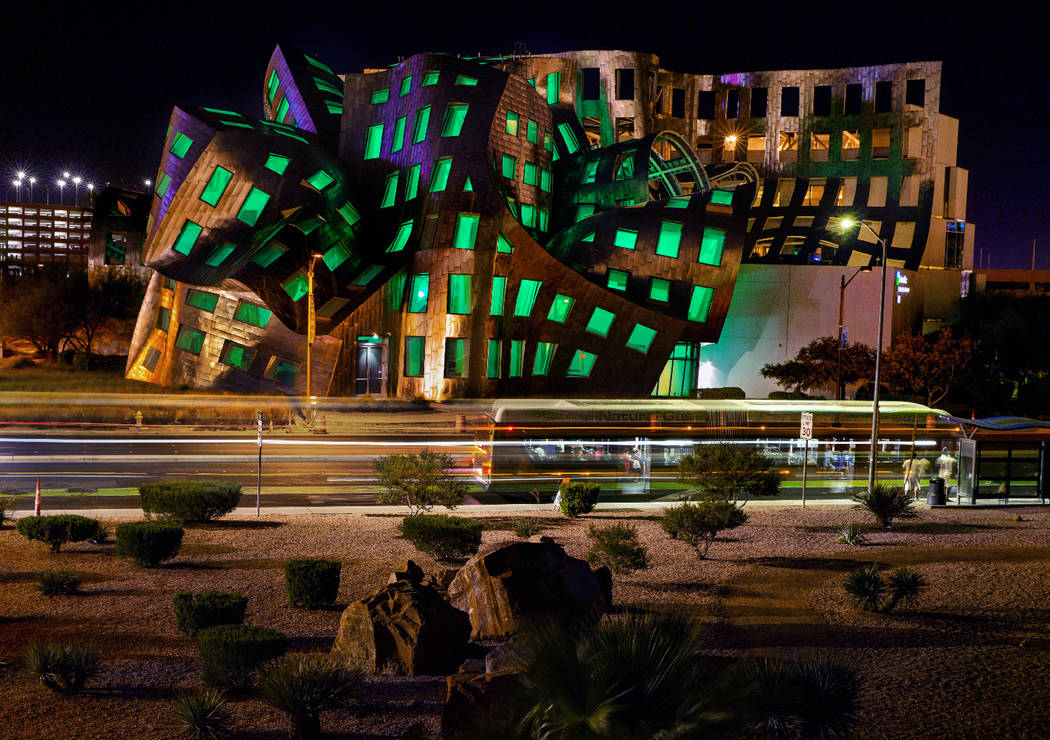 The windows are bathed in green from within the Keep Memory Alive Event Center designed by renowned architect Frank Gehry at the Cleveland Clinic Lou Ruvo Center for Brain Health in Las Vegas,Tuesday, June 25, 2019. The center will celebrate the 10th anniversary on Thursday, July 11, 2019. (L.E. Baskow/Las Vegas Review-Journal) @Left_Eye_Images 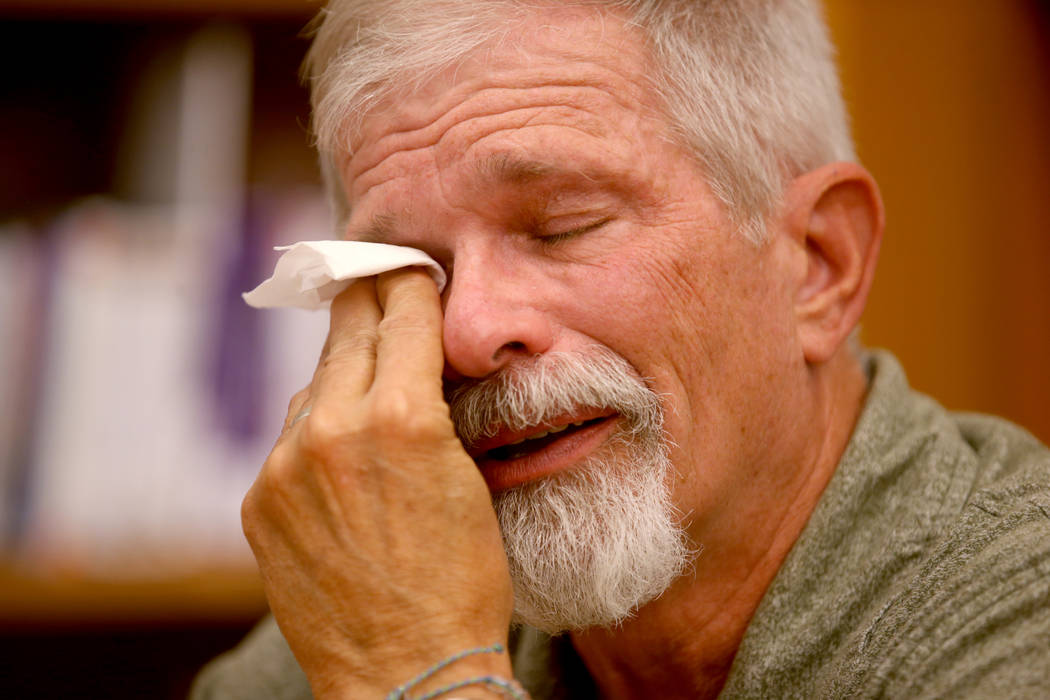 William "Bill" Kramer talks about his late wife, Maureen "Reene" Kramer, during an interview at the Cleveland Clinic Lou Ruvo Center for Brain Health in Las Vegas Friday, June 28, 2019. Kramer was a caregiver for his wife who was an Alzheimers patient at the Ruvo Center. (K.M. Cannon/Las Vegas Review-Journal) @KMCannonPhoto 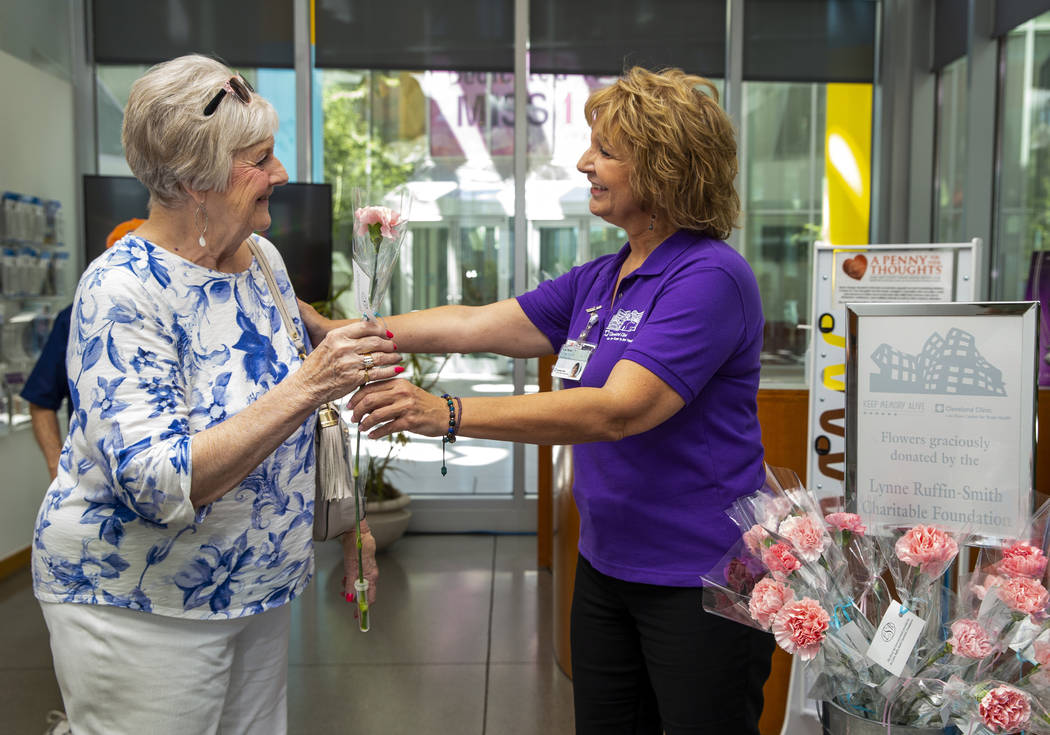 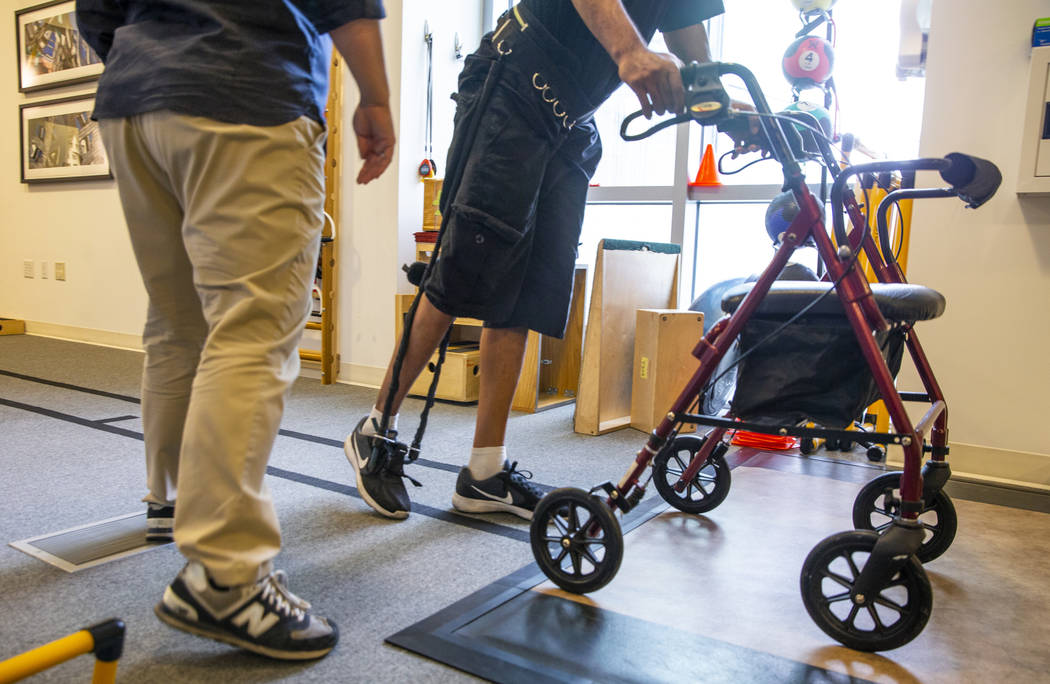 Physical Therapist Christine Ross works with a patient on a walking exercise within the therapy department at the Cleveland Clinic Lou Ruvo Center for Brain Health in Las Vegas, Tuesday, June 25, 2019. The center will celebrate the 10th anniversary on Thursday, July 11, 2019. (L.E. Baskow/Las Vegas Review-Journal) @Left_Eye_Images 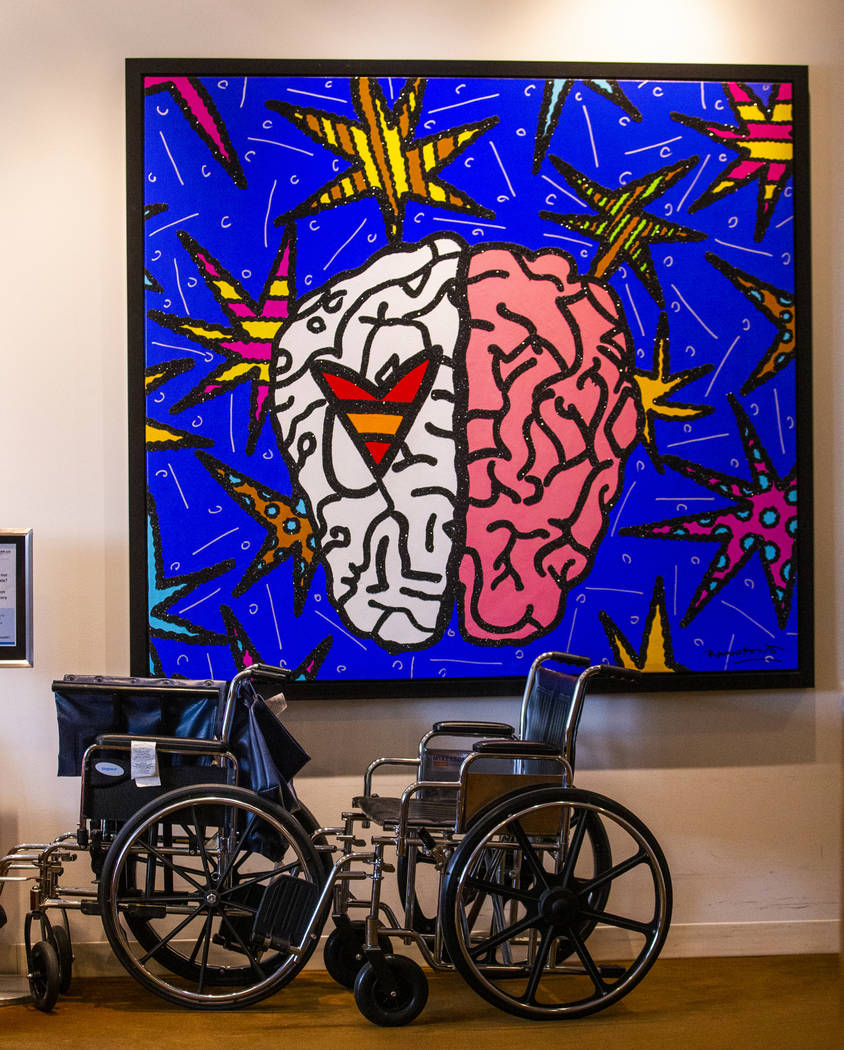 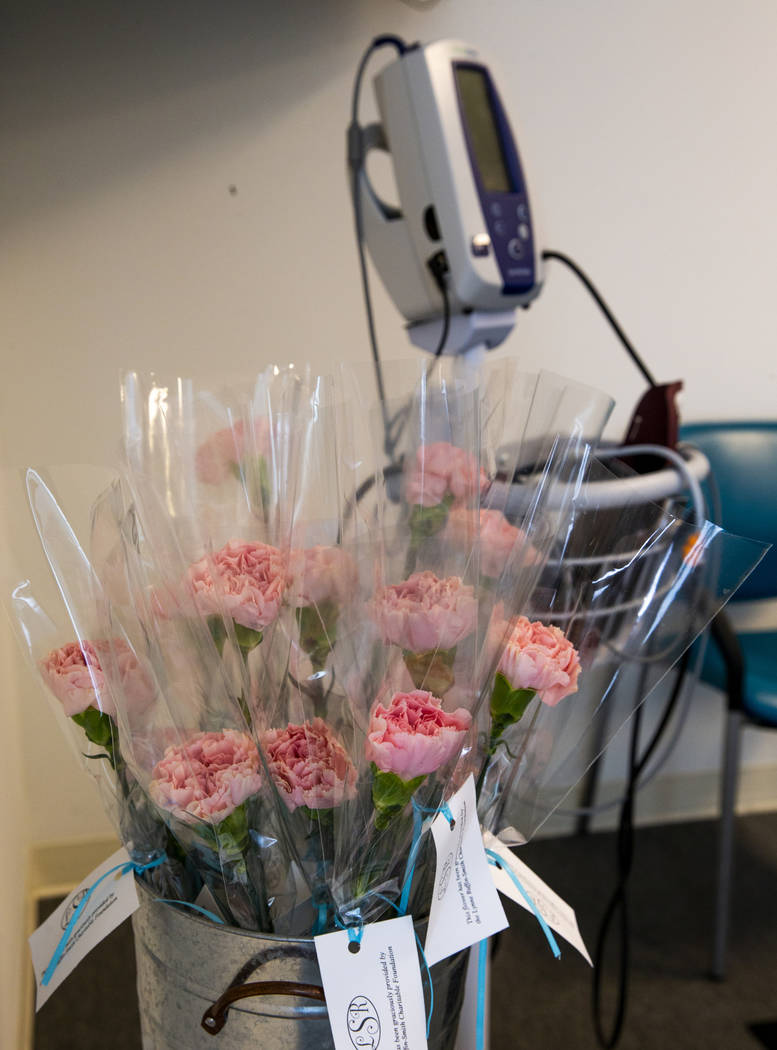 Flowers are ready to be given out to each patient entering the Cleveland Clinic Lou Ruvo Center for Brain Health in Las Vegas, Tuesday, June 25, 2019. The center will celebrate the10th anniversary on Thursday, July 11, 2019. (L.E. Baskow/Las Vegas Review-Journal) @Left_Eye_Images 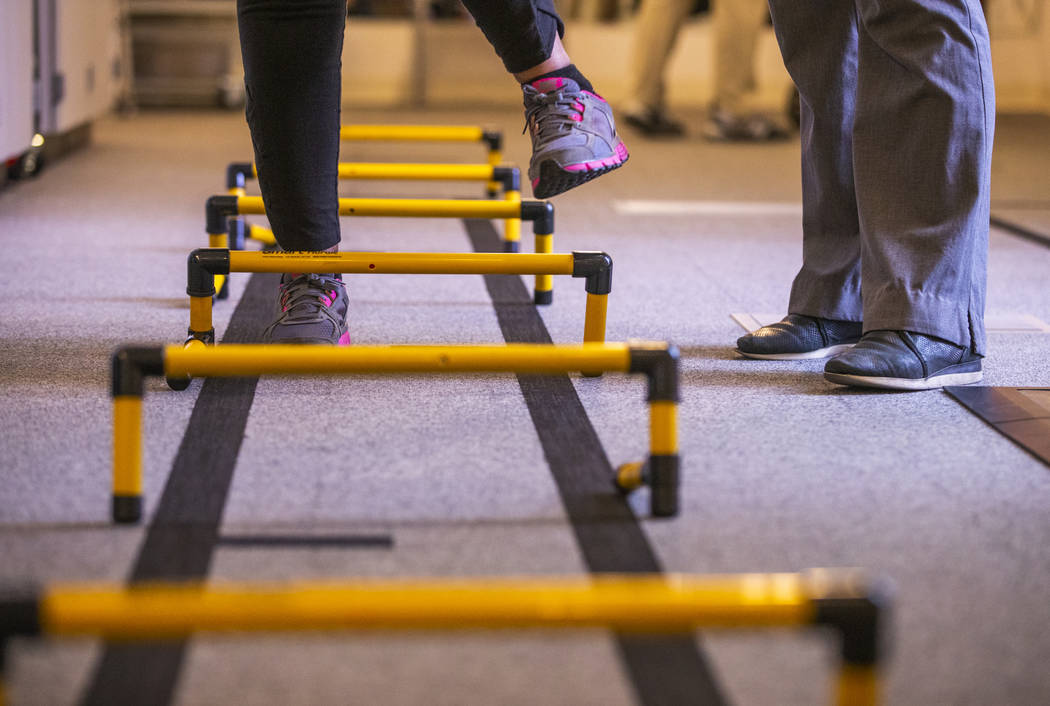 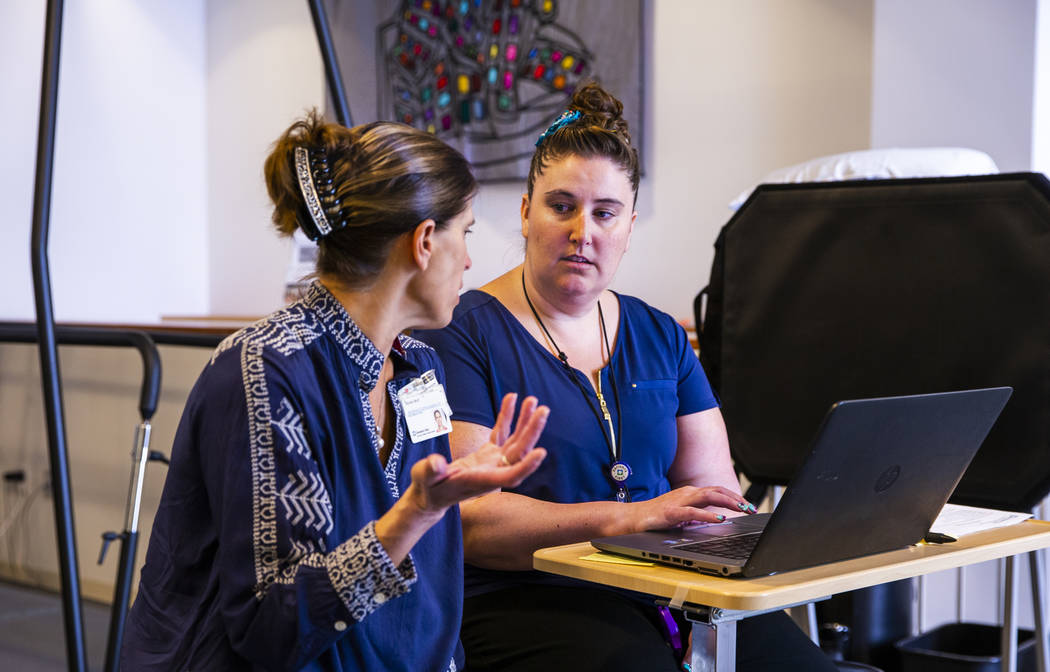 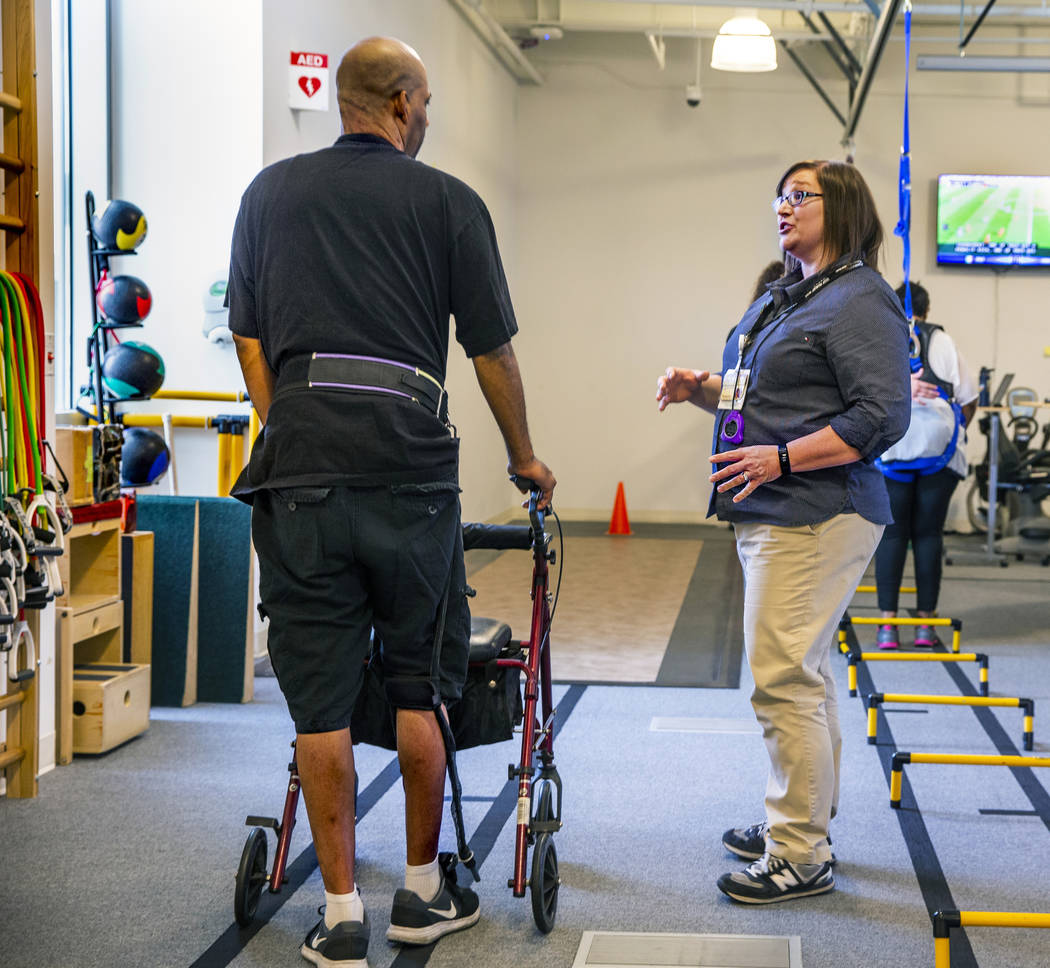 A patient confers with Physical Therapist Christine Ross on a walking exercise within the therapy department at the Cleveland Clinic Lou Ruvo Center for Brain Health in Las Vegas, Tuesday, June 25, 2019. The center will celebrate the 10th anniversary on Thursday, July 11, 2019. (L.E. Baskow/Las Vegas Review-Journal) @Left_Eye_Images 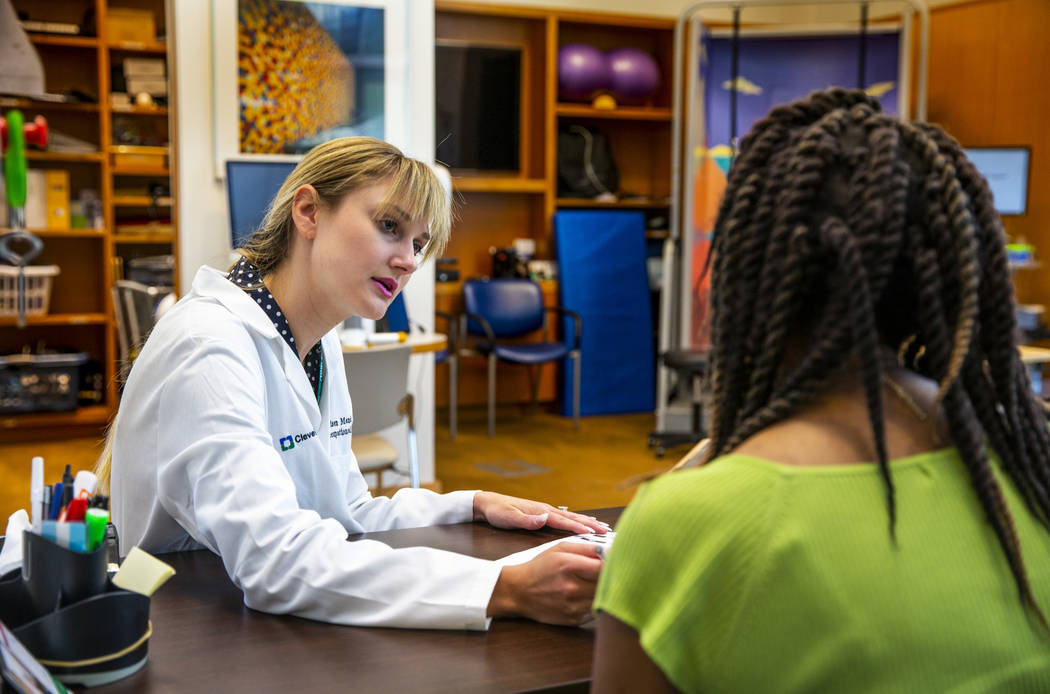 Occupational Therapist Madisen Mendez confers with a patient on the skills she would like to improve with her efforts in the occupational therapy department at the Cleveland Clinic Lou Ruvo Center for Brain Health in Las Vegas, Tuesday, June 25, 2019. The center will celebrate the 10th anniversary on Thursday, July 11, 2019. (L.E. Baskow/Las Vegas Review-Journal) @Left_Eye_Images 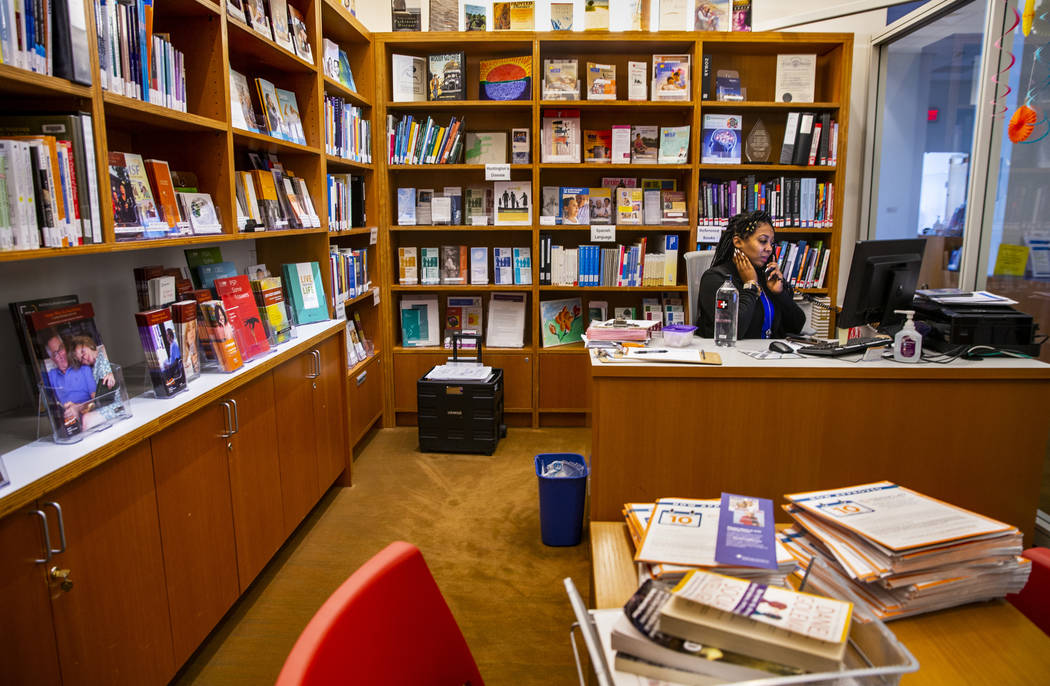 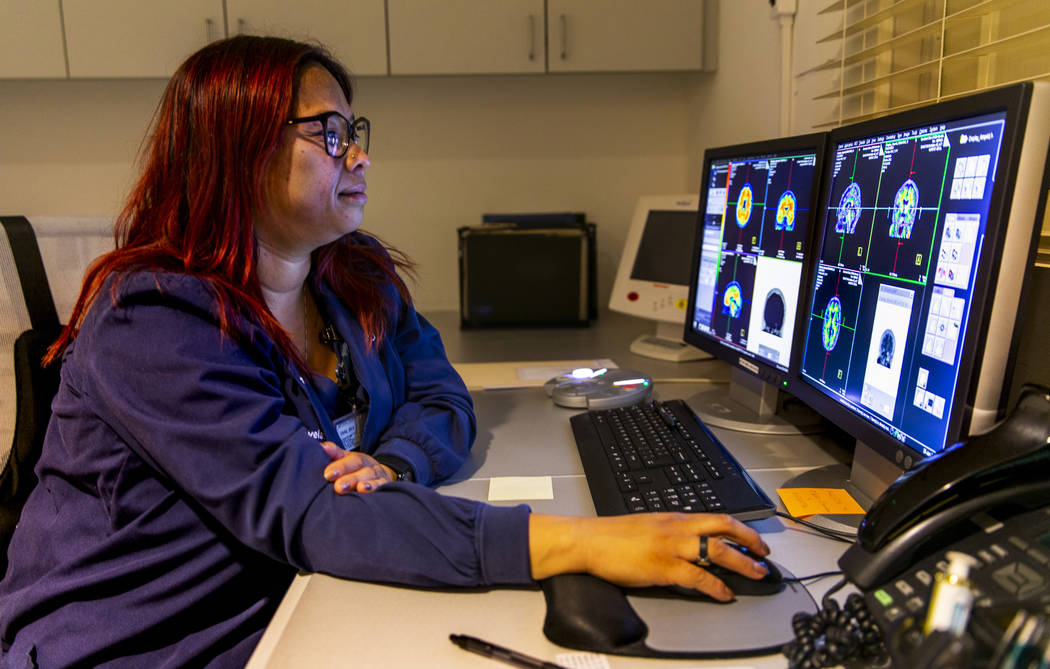 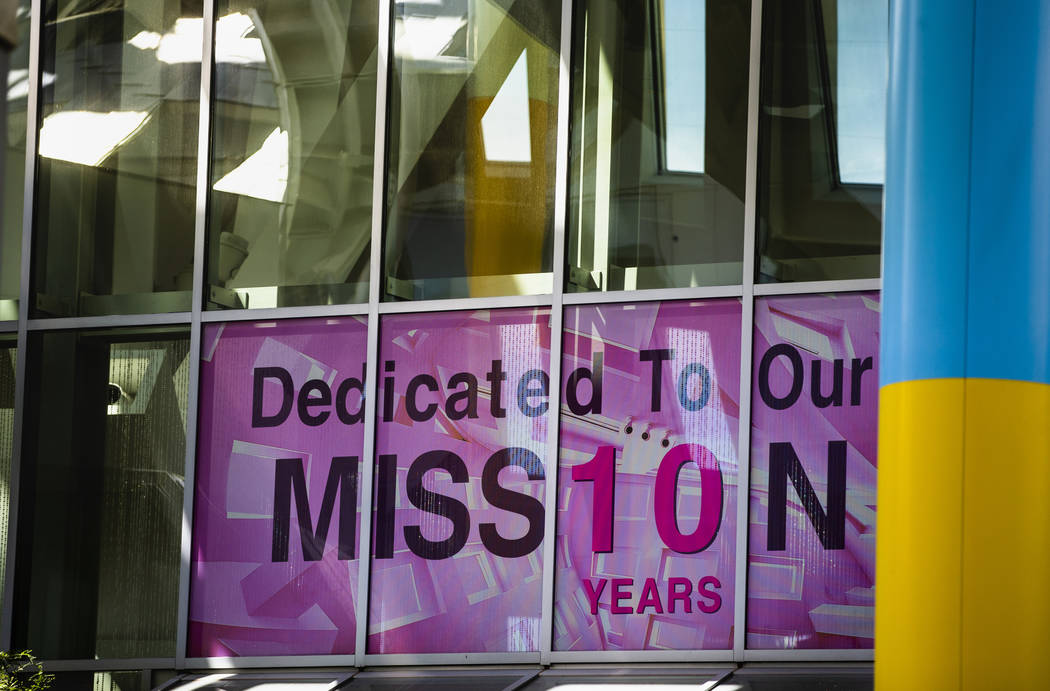 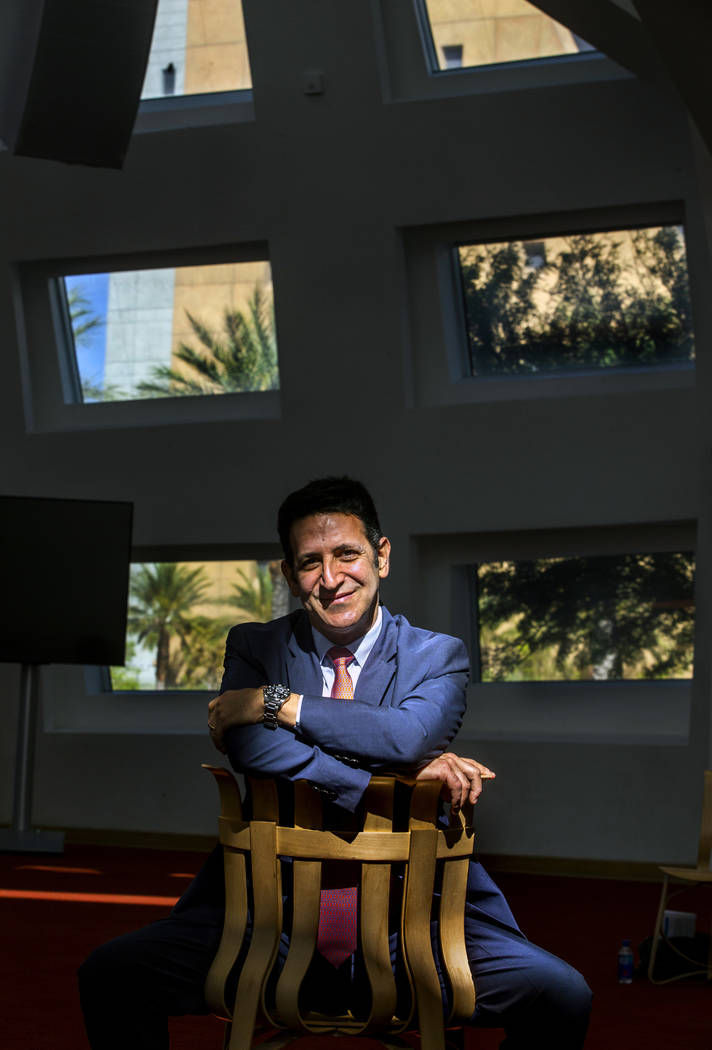 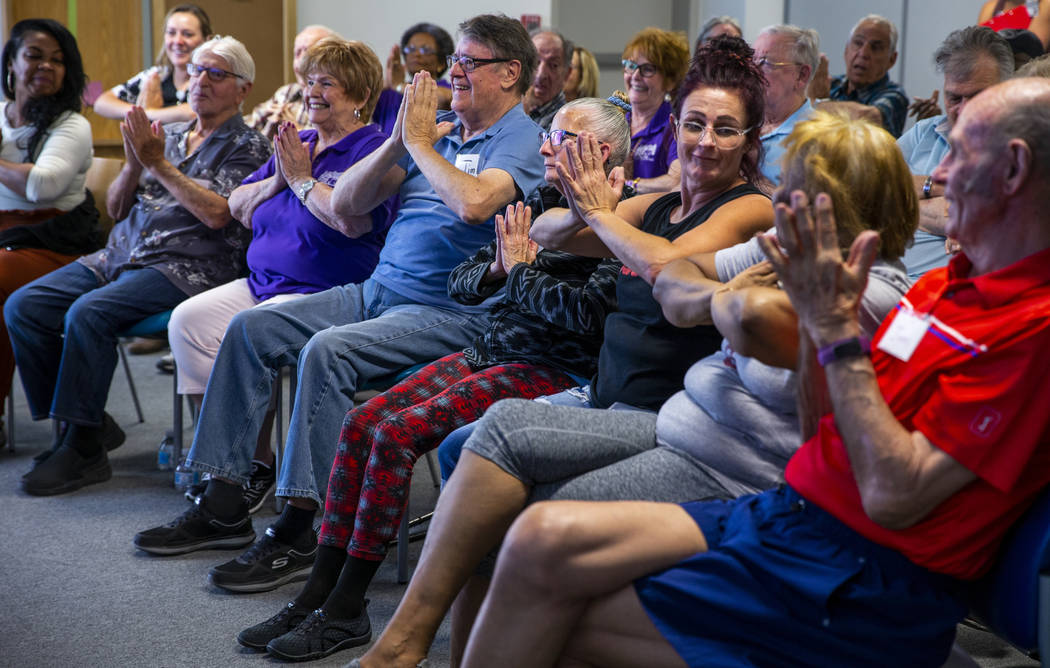 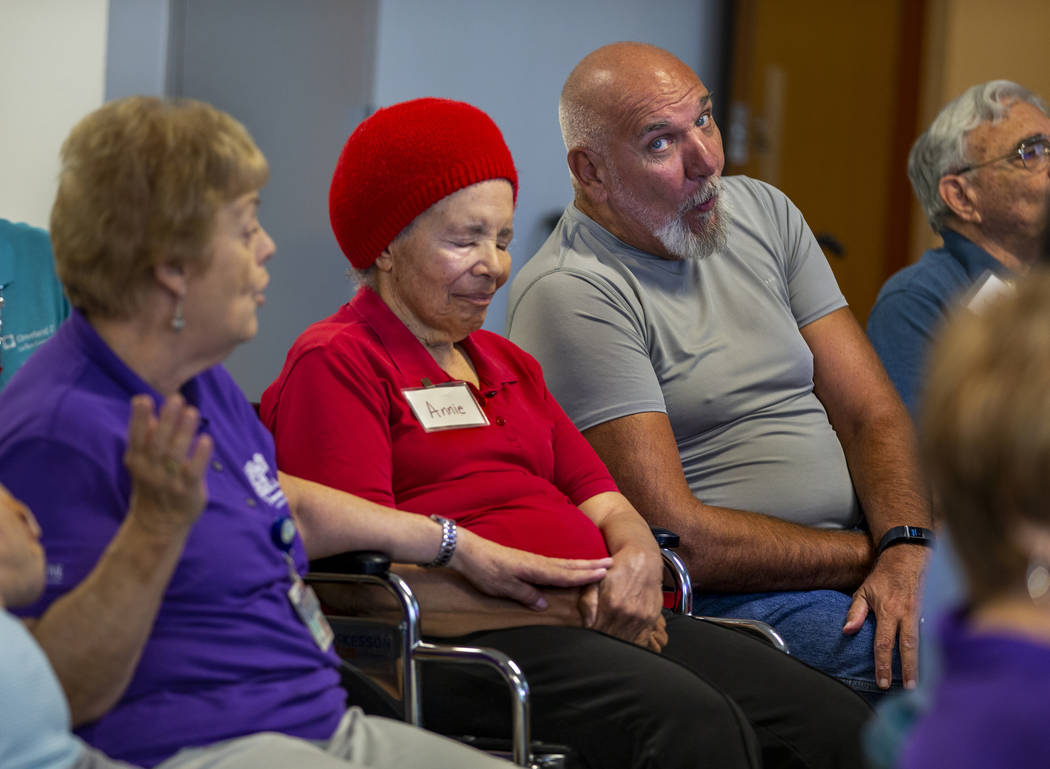 Volunteer Charleen Kellum touches the hand of participant Annie Hutchinson as other volunteer Jay Nagle sings to her during a group song amongst exercises, stories and more in a Memory Cafe - Respite class at the Cleveland Clinic Lou Ruvo Center for Brain Health in Las Vegas, Wednesday, July 3, 2019. (L.E. Baskow/Las Vegas Review-Journal) @Left_Eye_Images 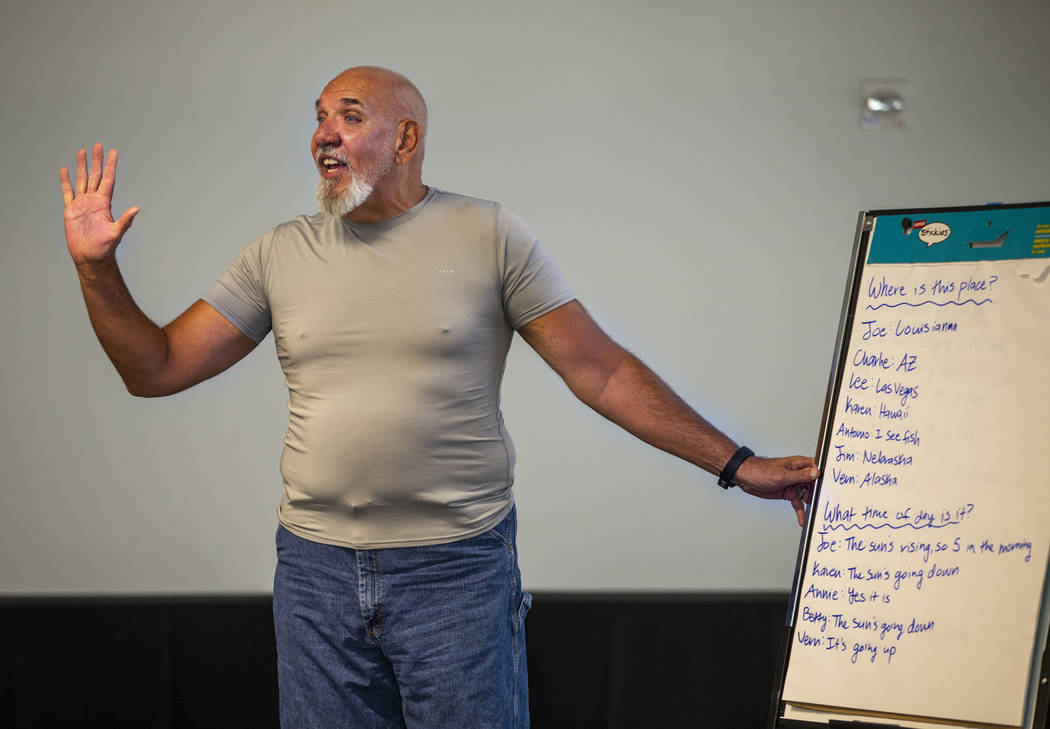 At first, Maureen Kramer’s forgetfulness seemed like no big deal. She’d forget about plans made with her husband, Bill, and began relying on written directions to drive to familiar places.

In 2010, it didn’t seem like cause for alarm. “A lot of her life she was direction-impaired,” recalled Bill, a retired operating room nurse, with a smile. “There’s little things where you go, ‘They’re just having a bad day.’ But supper gets made, people go to work and everybody comes home.”

Then in 2011, the mother of four was dismissed from her nursing job at a hospital for missing orders. The next year, her doctor ordered an MRI that came back normal. After her mother died in 2013, a psychologist diagnosed Maureen with bereavement depression.

But the fog didn’t lift with time; it only got heavier. One afternoon, she went to take the family dog for a walk and wound up lost alongside the 215 Beltway. A sympathetic motorist brought her and the dog home and called Bill. When he arrived, his wife had no recollection of the event.

It was then that the couple contacted the Cleveland Clinic Lou Ruvo Center for Brain Health.

A desire to prevent such wrong turns and misdiagnoses inspired a lifelong Las Vegas resident to found the center, which will celebrate its 10th anniversary this week.

It took three months for the couple to get an appointment at the center, but when they did, Maureen, 60, was quickly diagnosed in 2014 with early onset Alzheimer’s disease. Once the couple had an accurate diagnosis, treatment could begin, along with support services and financial assistance.

Using state-of-the-art imaging equipment and specialized skills, the center’s doctors were able to catch changes in the brain that others had missed.

That this high level of expertise could be found in Las Vegas resulted from the traumatic experience of Las Vegas businessman Larry Ruvo and his family. “What I went through, I don’t want any other family or friend or anyone to go through,” said Larry Ruvo, whose father, Lou, died from Alzheimer’s.

Ruvo’s own experience with the misdiagnosis of his father, the insensitivity they encountered in medical settings and the toll caregiving took on his family set the executive with a large liquor wholesaler on an unlikely mission: to create in his hometown a center for the research and treatment of neurodegenerative brain diseases, one where both patients and caregivers would be treated with dignity.

The center has come a long way as it prepares for its 10th anniversary on Thursday. Today it provides expert diagnosis and treatment for people and families living with diseases such as Alzheimer’s, Parkinson’s, Huntington’s and multiple sclerosis. It also has gained wide acclaim for its brain disease research.

In the days leading up to the anniversary, Ruvo and Dr. Marwen Sabbagh, the center’s director, spoke about the journey to bring it to Las Vegas and hinted at soon-to-be-announced plans. At the same time, they cautioned that continued success at the center is by no means guaranteed.

“It does take a village, and the village needs to step it up.”

For years, Larry Ruvo’s parents, Lou and Angie, ran the Venetian, a popular Italian restaurant on Sahara Avenue known for its food and hospitality. Though Larry saw his father daily, the restaurant’s regular customers were the first to suspect something was wrong.

They told him, “Louie … just doesn’t seem the same,” noting that he no longer remembered what table or wine they liked.

The family consulted multiple local doctors, all of whom said Lou’s trouble was his heart. After misdiagnosis after misdiagnosis, the family saw a specialist in California who made the correct diagnosis of Alzheimer’s. The experience “scarred me for life,” said Ruvo, who described a tiny waiting room with one patient in diapers, another in a wheelchair and a third who couldn’t hold his head up. The experience was devoid of privacy or dignity.

In 1996, following his father’s death, Larry Ruvo hosted a memorial dinner at which he spoke of his desire to create a quality care facility in Las Vegas to treat diseases such as his father’s. His friends spontaneously donated money to the cause. These donations became the seed money for Keep Memory Alive, the fundraising arm of the center, and the dinner served as the inspiration for the annual Power of Love Gala fundraiser.

Ruvo, an influential businessman with a deep Rolodex, not only spearheaded fundraising to build the center but also persuaded world-famous architect Frank Gehry to design it. A partnership with the renowned Cleveland Clinic then allowed the center to attract top medical talent.

The Cleveland Clinic was named the No. 4 neurology program in the country for 2018-19 in U.S. News and World Report’s annual rankings. The nonprofit medical center has pioneered breakthroughs such as coronary artery bypass surgery and the first face transplant in the U.S.

“It’s one of those remarkable partnerships that was envisioned by Mr. Ruvo — to bring something like that here and combine it with the Cleveland Clinic — that created this remarkably strong enterprise here in Las Vegas,” said Jefferson Kinney, the founding chair of the new Department of Brain Health at UNLV. “There’s strong patient care, but it’s also connecting the science to the patients and getting a number of the patients and individuals here to participate in the science” through clinical trials and research.

The impact of the research is felt not just locally but nationally and internationally, said Kinney, who is collaborating with the center on a number of projects.

Sabbagh said the research is focused on ways to detect, treat and ultimately prevent neurodegenerative brain disease. He expects some small research wins in the near future, such as ways to improve patient behavior and lessen sleep disruption.

In the next decade, could there be a cure for Alzheimer’s?

“I use the word ‘cure’ carefully,” Sabbagh said. “Changes in the brain start 20 years before your first day of forgetfulness. So by the time you come in the door, you already have a brain full of disease. Cure to me is if you take it out of the brain as if it were never there.

“I think we will convert Alzheimer’s from a terminal disease as you know it to a chronic disease, much like we did with HIV and diabetes,” he continued. “I think that will happen in the next few years. The next generation (of advancements) will be to identify people at risk through genetics and other biomarkers. We have engaged very aggressively in prevention strategy — instead of curing it, we’re going to prevent it. We’ll be selecting people before they have symptoms, and giving them their intervention or treatment or strategy.

Care for the caregivers

In addition to patient care and research, the center focuses on providing support services such as therapy for both patients and their caregivers.

Up until just a week before her death in April, Maureen Kramer continued to attend a music therapy group at the center. “There were a lot of times where it was kind of like getting her back for a little bit. For about half an hour or hour, she was there,” her husband said.

Bill Kramer said the caregiver support services he received, including individual counseling and support groups, served as a lifeline.

“It was such a relief to know that I was being normal, that being angry was normal, that missing things was normal,” he said. “She never called me Bill after sometime in 2014. She stopped referring to me by my name. It hurt. It always hurt.”

The center “pretty much saved my life,” especially as his wife’s disease progressed.

To take caregiver support to the next level, beginning in August, the center will have an endowed chair of caregiving research — the Angie Ruvo Caregiving Chair, named after Ruvo’s mother, his father’s primary caregiver.

Ruvo has other big plans. This year the center will announce details of an Alzheimer’s program specifically for women.

He hopes to build a second building adjacent to the current one, which will allow the center to see more patients and to reduce wait times for initial appointments. Gehry already has drawn up the plans. The key to moving forward will be sustained funding.

“Every patient we see for these brain diseases, we lose money. That’s just a fact,” Ruvo said.

With many of its patients on Medicare, the clinic is reimbursed approximately 19 to 21 cents for each dollar it spends on care — a lower rate than in many other parts of the country. As a result, the center is losing $3 million to $5 million a year on patient care, he said. The Cleveland Clinic and philanthropy make up the difference.

“It’s not a good business model, but I’ll tell you what it is. It’s the right thing to do,” Ruvo said.

To fund the center in perpetuity, the center’s team in May announced an endowment campaign to raise $100 million. Ruvo has expressed his hope that, among others, large corporations doing business in the Las Vegas Valley and in Northern Nevada, where the center has a satellite office, will support the campaign.

As Kramer knows, the stakes are high. In the months since his wife’s death, he has continued to attend the center’s support groups for caregivers.

“It does me good to be with people,” he said. “And I think it does everybody else good to hear my story.”

Mary Hynes, a former editor and reporter at the Las Vegas Review-Journal, may be reached at mhynesvegas@gmail.com.