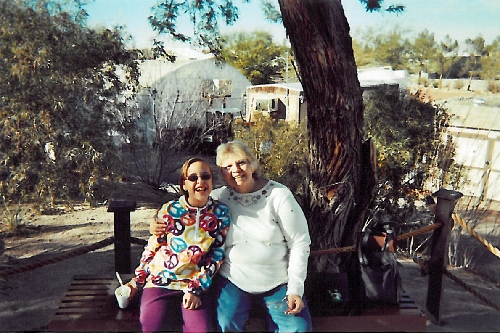 For most people, their heart rate elevates with exercise.

Sandy Sparks, who lives near The Lakes, said her heart would start to race even if she was merely sitting down.

The 60-year-old grandmother recently became the first person in Nevada to undergo a new procedure, an electrophysiology study and catheter cryoablation, a procedure to treat arrhythmia. It was done Aug. 22 at MountainView Hospital, 3100 N. Tenaya Way.

Sparks knew she had an irregular heart rate for many years and said she considered it more a curiosity than a problem. It had never been an issue until last fall, when it was determined to be part of her deteriorating health. Sparks said she just wanted to be able to live her life fully and spend time with her 10-year-old granddaughter, Lilly Cartino, who lives in Ely.

"I used to be able to run up the stairs in my house," she said, two days before the procedure. "I’d (race) my granddaughter up. Now, I walk up, and it makes me tired. We’d go walking, and about five minutes in, I’d have to stop."

Doctors determined that she had 80 percent blockage in one of her arteries. That issue was addressed in February, when a stent was inserted to help keep it open. Sparks also had a pacemaker implanted soon after and bares a two-inch scar below her left clavicle.

When those procedures did not address the galloping heart problem, more tests were run.

She said she became something of a celebrity at the center where she was being tested.

"They didn’t recognize me (by face), but they recognized me by my heartbeat," she said. "They’d go, ‘Oh, you’re the one with the irregular heartbeat.’ "

Sparks said the condition had slowed her down considerably, preventing her from going to bingo games at Red Rock Resort, taxing her after grocery shopping and necessitating a nap every afternoon. She said the stent, however, brought about an immediate change.

"I didn’t realize how bad I was feeling until I felt so good after that first cardio (procedure)," she said. "I was like, ‘Wow, this is what I’m supposed to feel like.’ "

The cardiac cryoablation procedure involved running a tube to Sparks’ heart through a vein in the groin area, then locating the area of the heart causing the problem and freezing it with a cryoballoon instrument.

"This procedure is yet another way that we are giving the community clinical reasons to choose MountainView Hospital," said MountainView CEO Will Wagnon.

Narula has done more than 1,000 ablation treatments, but this is his first with the cryoballoon. He had undergone training for it in Minneapolis, where doctors used pigs. There, he learned how to manipulate the balloon, inflate and deflate it and apply the freezing element.

"Our goal is to prevent electrical activity from coming out of the veins that bring blood back from the lungs to the heart," he said. "What we do is, we take a long needle and do a transseptal puncture. That is to say we punch a hole from the right upper chamber of the heart to the left upper chamber of the heart, and then we pass an instrument or catheter over to the left side. Traditionally, we’ve done ablations using radio frequency, and the catheter is moved around the heart and used to heat up tissue to prevent electrical activation. The initial steps —- everything we do up to the point where we introduce the instrument into the heart —- is actually stuff that we’ve done before, several hundred times … the only thing new is, how do we handle the balloon safely?’ "

Narula was assisted by Bensler, who had done several of these procedures before he came to Las Vegas and joined HealthCare Partners.

"So he was standing there with me and proctoring me through the procedure," Narula said.

The procedure carries a risk of one or two people per 100 having complications, he said.

Sparks had no complications and is looking forward to Lilly’s next visit.

Lilly said she likes to go swimming with her grandmother, as well as baking, bowling and helping with barbecue cook-offs.

"We make ravioli together," she said. "I taught her how after my mom taught me … We’re planning to go to the Grand Canyon for a while, but with her heart, we haven’t gotten to do that."

Sparks said she would love to mark that off their "to-do" list.