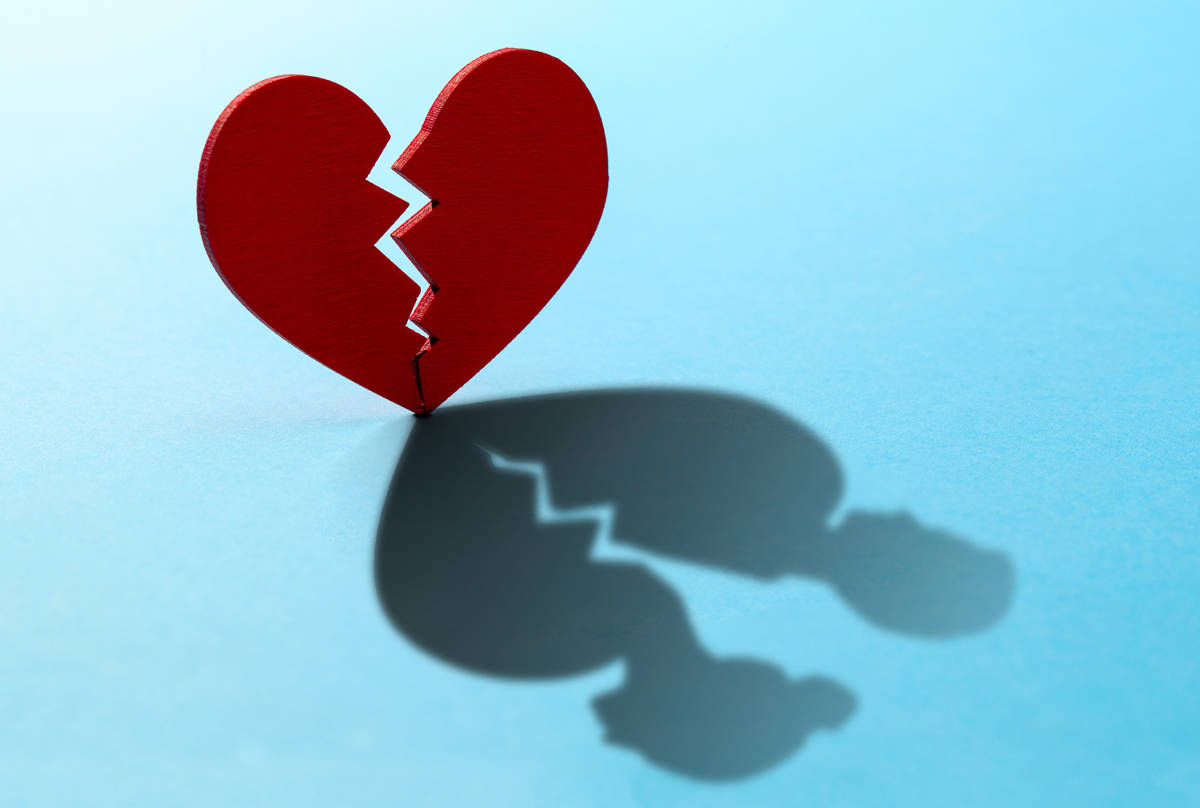 During the pandemic, few areas have been thrown into disarray quite like romantic relationships. (Getty) 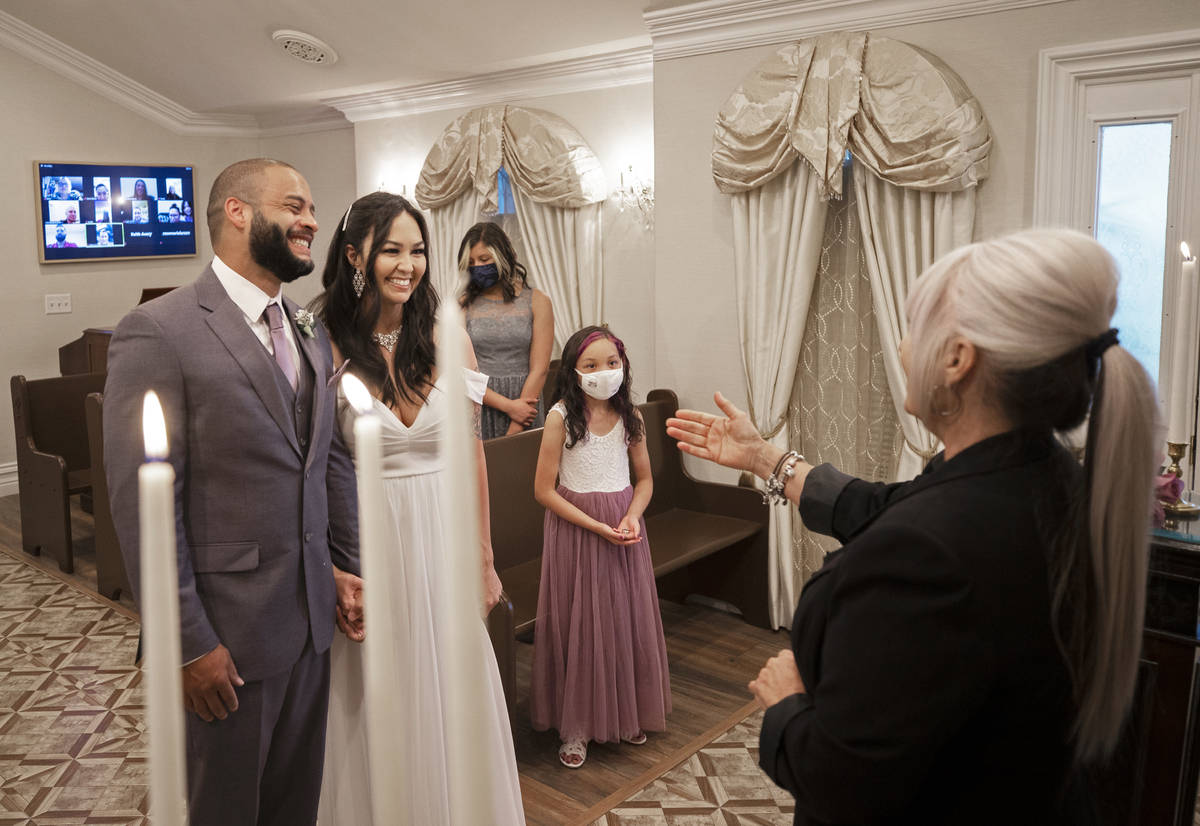 William and Brandi Alexander, from Anchorage, Alaska, listen to their officiant Ginnie Wilson during a vow renewal ceremony attended by friends and family from around the country via Zoom on Sept. 23 at Chapel of the Flowers in Las Vegas. (Benjamin Hager/Las Vegas Review-Journal) @benjaminhphoto 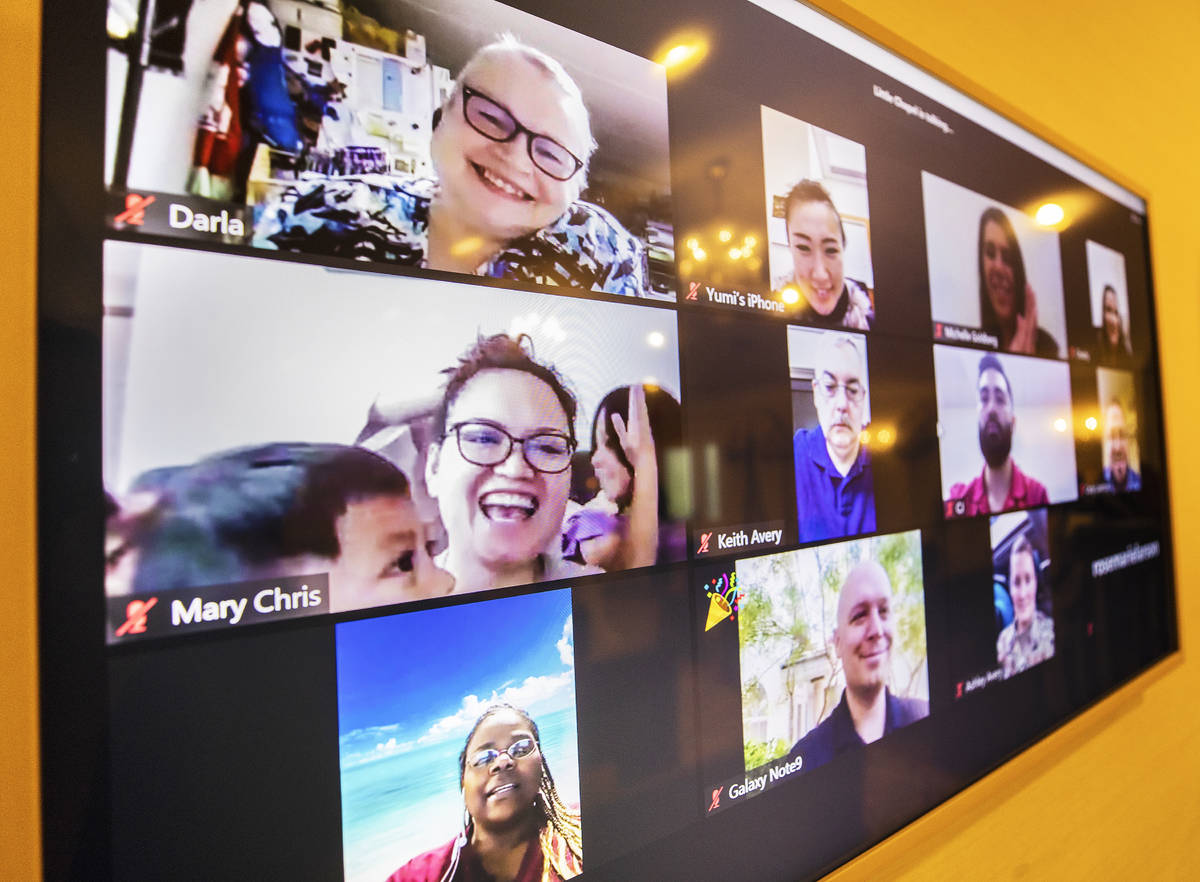 Friends and family cheer via Zoom during a virtual vow renewal ceremony for William and Brandi Alexander, on Sept. 23, 2020 at Chapel of the Flowers in Las Vegas. (Benjamin Hager/Las Vegas Review-Journal) @benjaminhphoto

Eleven months into what everyone thought would be a couple of weeks, the pandemic has strained every corner of civilization.

Few areas, though, have been thrown into disarray quite like romantic relationships.

Even in the wedding capital of the world, fewer nuptials are taking place. Divorce attorneys are turning away business. The rejection that comes with trying to score an appointment with one of the city’s overworked marriage and family therapists could be enough to send you looking for a second therapist.

This Valentine’s Day, romance hasn’t sounded so bleak since the days when Nashville was cranking out songs of the “my wife moved out in my new truck and drove over my dog on her way out of town” variety.

Weddings were the first domino to fall.

“People are getting married. People are definitely doing it,” says Jodi Harris, president of the Las Vegas Wedding Chamber of Commerce. “Just not in the droves that we’re used to seeing.”

Wedding chapels inside casinos stayed boarded up until those properties were allowed to open June 4. Freestanding chapels, hampered by cancellations and limits on gatherings, had to get creative.

Donne Kerestic, CEO at Chapel of the Flowers, worked with Zoom to create a way for guests who couldn’t travel to Las Vegas to participate in ceremonies. Livestreaming a service was nothing new, but the advances in technology meant the couple could look over their shoulders and actually see their virtual guests.

Over at Graceland Wedding Chapel, Elvis-themed vow renewals had become something of a tourist attraction. To compensate for the city’s anemic visitation numbers this summer, the virtual Elvis vow renewal was born. For $279, an Elvis impersonator will sing three songs over Zoom, conduct vows and oversee a ring exchange — none of which is legally binding — for the couple and up to 50 guests, all from the comfort and safety of their homes.

“I know the chapel industry is not hurting as bad as the support businesses,” says Harris, who owns Sight & Sound Events. “The photo booth guy. The DJ. … We’re still in a situation here where (because of safety protocols) a lot of the major hotels do not allow dancing. It’s like ‘Footloose.’ ”

Many in the vendor community are most definitely hurting, Harris says. Some are saving money by leaving their office space to work from home. She recently sold a van she wasn’t using, and others are cutting back wherever possible. “I think that a lot of really small companies probably have gone away. I know that people are re-evaluating their expenses.”

But there’s excitement on the horizon.

“Everybody is feeling hopeful, just because we are seeing inquiries. … We do see optimism,” Harris says. “Our fingers are crossed.”

Many of the couples whose weddings were canceled early in the pandemic simply pushed their ceremonies a year. And April 3 is one of those numerically blessed days — 4-3-21 — that tend to inspire couples.

As the wedding industry was struggling this summer, Nedda Ghandi was busier than ever.

From March through May, people were scared and didn’t want to leave their homes, says Ghandi, the president-elect of the Clark County Bar Association who’s practiced family law for 13 years.

“By June, it just blew up,” she says. “I don’t know if it was because they were locked in the same house together, or (because) people were out of work. We couldn’t breathe, we were so busy. Everybody wanted a divorce.”

There was a lull in December and early January, which is typical in family law, she explains. “And now it’s just skyrocketed again.”

That rush, Ghandi confirms, has been centered around the pandemic, with lockdowns causing enormous strain on marriages.

“To spend, all of a sudden, that time together after 10 years or 15 years of marriage,” she says. “ ‘We realized that we don’t get along. We don’t have anything in common. We’re not interested in being in a relationship together anymore.’ That’s what, I think, we saw the most.”

The other major stressor, as is often the case, Ghandi notes, has been financial. More divorces than usual have been based around the idea that one partner was moving back to wherever they came from to gain both emotional and financial support from family members.

It hasn’t just been couples who are still getting to know each other, she reports. “I’ve seen a lot more long-term marriages disintegrate. I would say people over the 20- to 25-year mark, I’ve noticed there’s a larger proportion of those clients than ever before.”

As a result of the increase in demand, she says the six attorneys of Ghandi Deeter Blackham have had the luxury of becoming much choosier with the clients they accept. She’s been referring potential clients to other firms more than ever.

Despite the anecdotal evidence from Ghandi and her colleagues, after a slight uptick in 2019, the number of marriage dissolutions in Clark County actually dropped from 12,631 that year to 11,152 in 2020.

As promising as that sounds, Ghandi attributes that decrease to the lull between March and June when her phones simply weren’t ringing.

The closest thing to a silver lining she can think of is the fact that fewer of her clients seem to be bitter or vindictive. They just want to move on.

“When they’re forced to face the time together and forced to be together, they realize that they’ve grown apart tremendously,” Ghandi says of those clients. “They’re not even the same people anymore. And, in that respect, I don’t think the fights are as nasty.”

Not enough therapists to go around

Whether it’s relationships that are in trouble or ones that have ended altogether, marriage and family therapists are there to help vulnerable Las Vegans pick up the pieces.

Assuming they can secure an appointment.

“We are severely limited in terms of the types of clients and the numbers of clients that we can provide for,” says Katherine M. Hertlein, a professor of couple and family therapy at UNLV and a licensed marriage and family therapist. “It’s a workforce shortage issue that’s been with us for years here.”

Nevada doesn’t have a marriage and family therapy doctoral degree program, she explains, so many trainees leave the state. They provide services in their new locations while they’re pursuing their degrees, then they don’t return, creating a void.

“There continues to be a great need for those types of practitioners,” Hertlein says. “We just can’t pop ’em out fast enough.”

The pandemic has heightened the existing issues couples had been having. The fact that many of them are spending more time together, in many instances with both partners working from home, is only bringing those problems to the forefront.

“It’s the, ‘Gosh, I didn’t realize that this behavior, or this communication issue we were having, was so pervasive,’ ” Hertlein says of her clients. “It’s an exacerbation of what was already troublesome.”

Local marriage and family therapists are being inundated with more requests than they can handle during the pandemic, when their lives have been disrupted, too. Even if you can find a therapist who’s accepting new clients — and they happen to take your insurance — assuming you have any to begin with — it can be a struggle for your schedules to mesh.

“Therapists themselves are people who have children at home,” Hertlein says. “So while you might be able to have a session with me, you’ve gotta recognize that I’m doing my kids’ schoolwork right next to me, and I can’t have that session with you because of my own constraints.”

If you need help, don’t give up, even if the task of finding a therapist seems daunting. Hertlein recommends reaching out to larger facilities, such as UNLV’s Center for Individual, Couple & Family Counseling, Bridge Counseling Associates and Red Rock Counseling. Those groups have access to numerous resources, which can be accessed with one call, without seeking out individual therapists, and often at reduced rates.

The best advice she can give couples, whether or not they’re actively seeking therapy, is to remain flexible.