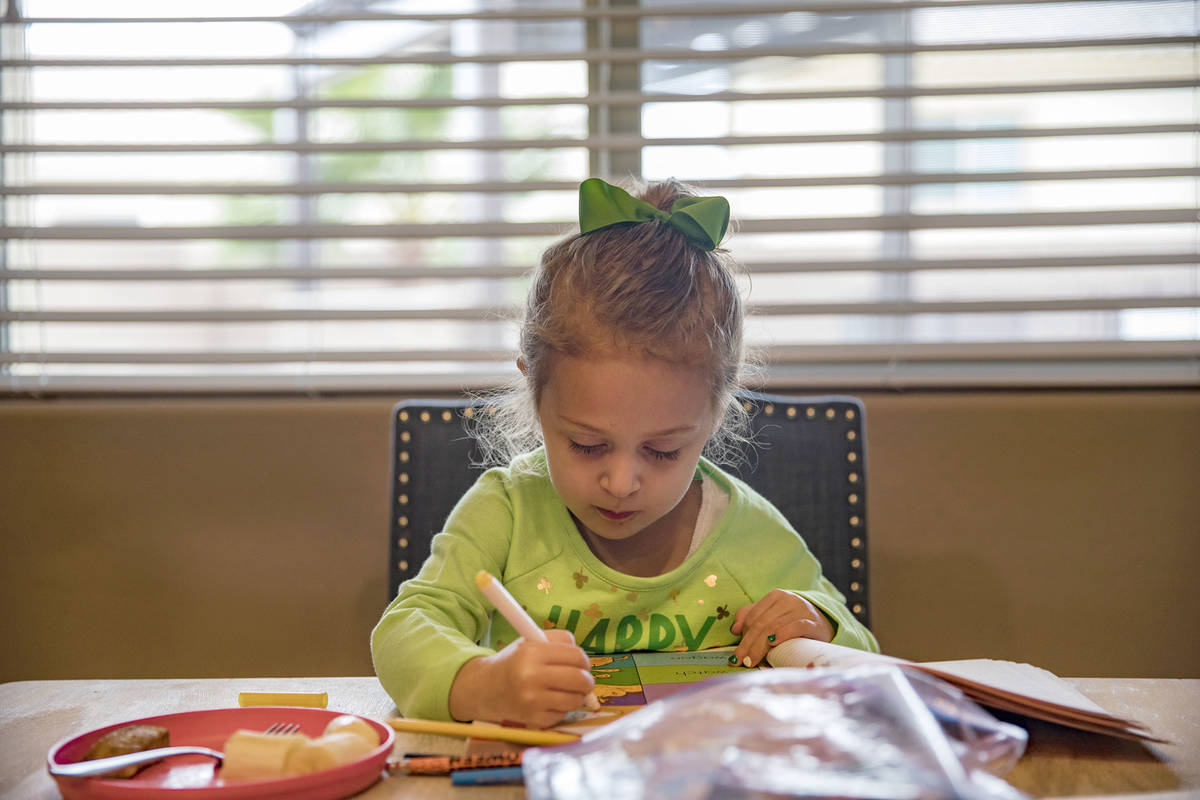 More details about the Clark County School District’s plan to reopen schools emerged at the Board of Trustees meeting Thursday night, with officials answering a long list of questions submitted by the general public.

The district’s plan seeks to divide students into two cohorts to attend school in person for two days a week and learn from home for three days a week, with a digital-only option for families who would prefer students stay home full time. Schools will be cleaned on Wednesdays and Fridays, in between cohorts.

Students would return to classes on Aug. 24 and would be required to bring and wear their own masks, though the district is working on ordering enough personal protective equipment as a backup.

A vote on a final plan is expected on July 9.

The questions began with what the plan would be for special education and preschool-age students, who were not addressed in the 33-page plan posted to the school board website.

Deputy Superintendent Brenda Larsen-Mitchell said the district would develop daily schedules for each student to afford some structure for students with individual education plans, and offer training for families to implement the blended learning schedule.

Early learning classes would mirror the K-5 schedule, with those plans currently under development, Larsen-Mitchell said.

Parent Cortney Larson said she’s hoping for answers to both early learning and special education plans soon. Her 4-year-old son on the autism spectrum struggles with any amount of distance education, she said, and would do better attending school for five days per week for half-days.

His class only had eight students or approximately 11 or 12 people total including teachers, Larson said.

“He thrives off of routine, as do many kids his age and little older,” Larson said. “In our situation, even a plan of three days of virtual learning just does not work.”

On the topic of distance education, Larsen-Mitchell clarified that individual schools would be responsible for supervising the distance education days, with teachers teaching live and offering enrichment activities for their students learning at home.

Chief Human Resources Officer Nadine Jones said each school would offer an option for teachers in high-risk categories to teach students on the digital-only track, and if a school has enough families interested in distance education, there may be dedicated staffers for Cohort C.

Students will need to log in to the Canvas platform at set times during their distance learning days and new material will be taught, Larsen-Mitchell said, unlike in the spring.

Seniors will be able to graduate early under the reopening plan if they complete their requirements during the first semester.

On in-school days, seniors would be released at staggered times to their end-of-day lunch. The end of day for seniors is at noon, so they will be released in batches to pick up their cafeteria lunch and then either leave or stay on campus for an hour.

In addition to daily cleaning and enhanced cleaning in between cohorts, the district will deploy electrostatic spray cleaning in the event of a confirmed COVID-19 case at a school. Testing for COVID-19 and temperature checks at entrances will not be required at this time.

Child care remains a primary concern for working parents, including district teachers and staff, who say they can’t afford the costs of day care three days a week or worry about possible additional exposure at a day care facility.

Larsen-Mitchell said the district would do its best to accommodate family schedules for cohorts.

Superintendent Jesus Jara also said he would be presenting this plan to the Vegas Chamber to inform employers and community partners of the situation. He acknowledged that the reopening plan would create child care challenges for parents, adding that the district was working with community partners such as the municipalities and the Boys & Girls Clubs of Southern Nevada on a solution.

“Don’t have the answers yet, but we are working with our partners,” Jara said.

However, some potential child care partners are facing challenges of their own. Andy Bischel, president and CEO of the Boys & Girls Clubs of Southern Nevada, said the agency is looking at reduced funding and capacity while needed service hours expand and operating expenses double.

All four municipalities are meeting in the next week to find ways to fill the void, Bischel said, including dedicating staff and facilities.

“(Boys & Girls Clubs) is included in the municipal agency effort, although I believe the combined efforts will not come close to meeting the needs of the community,” Bischel said.

The total cost of CCSD’s plan is $84.6 million, and it relies heavily on federal relief funds from the CARES Act.

The district expects to receive $83 million in CARES Act funding and will use $28 million for 96,000 additional Chromebooks.

The district had previously reallocated funds to purchase Chromebooks and partnered with the Public Education Foundation to raise donations for Chromebooks. PEF has raised $664,000 toward the purchase of around 2,000 Chromebooks, according to PEF President Kirsten Searer.

The district will also use $30 million in bond funding to expand Wi-Fi capabilities in schools.

The board received 1,504 comments from the public about the plan, with 399 expressing disagreement and 24 expressing support, with other comments suggesting alternate plans, voicing concerns or asking that kids return to school full-time.

Jara said in prepared remarks that the plan was not optimal, but it was sound, and would ensure educational continuity to students.

“For the past few months, this district alongside the global community affected by COVID-19 has faced one of the toughest ordeals ever,” Jara said, urging thoughtfulness and patience. “Getting back to a place of normalcy may not be an easy process.”

Trustees also heard another presentation on the district’s budget, which includes $38 million in projected cuts. The district is still awaiting word from the state on whether it will face additional reductions as a result of the economic impact of COVID-19.

The district did receive updated information on the minimum funding per pupil for 2021, which reduced by $3 to $6,135, but Chief Financial Officer Jason Goudie said the impact of the change was not a significant one.

School budgets will see a $120 million carryover from the 2020 school year, according to the budget presentation, up from $67.9 million in 2019, with a significant jump in supplies savings.