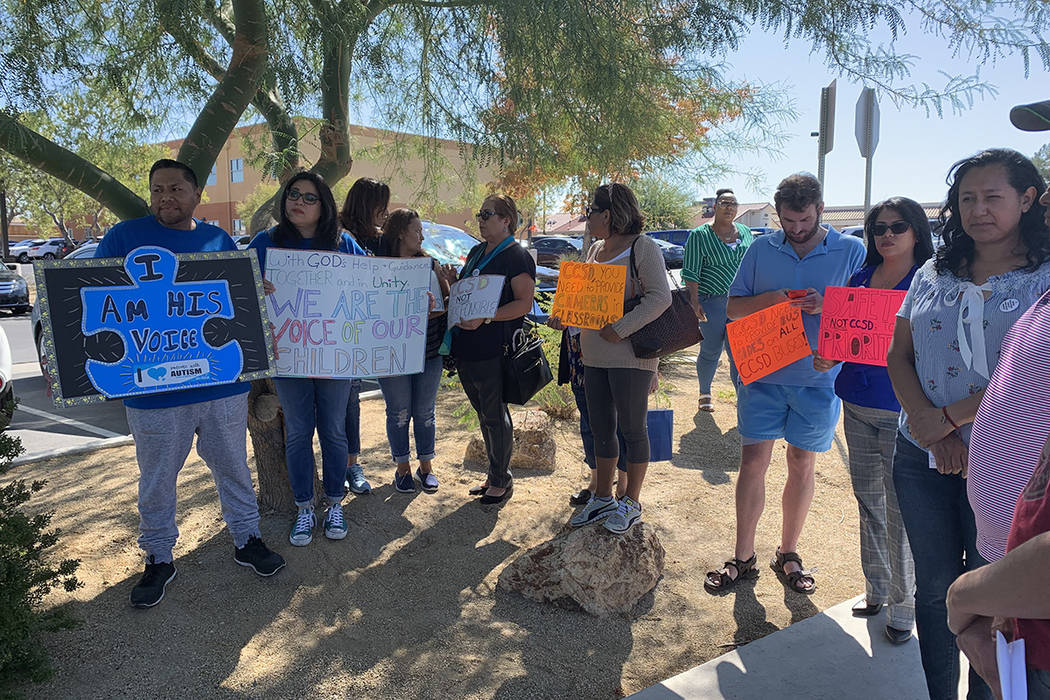 Parents of special education students banded together on Monday to demand more protection for their children, alleging that Clark County School District employees and students have routinely abused special needs students in the district’s care and that the school officials have buried information about the mistreatment.

Five families held a sidewalk news conference to highlight what they say is years of inaction over issues with the district’s special education program, which is also the subject of several recent lawsuits and settlements against the district.

The parents gathered to support Michael Brickner and his wife, who want their autistic, nonverbal daughter and son to be able to wear a location- and voice-monitoring device known as AngelSense. The family alleges their daughter was wearing the device when they heard what sounded like another student hitting her on the school bus.

The district, however, has opposed the use of such devices when parents have sought to use them.

Not a ‘safe environment’

“CCSD, you claim over and over again that safety of all the students is your top priority,” said Andrea Esquivel, whose nonverbal, autistic son had his leg broken by another student on a special education bus in 2016. “We know firsthand that is not true. You are not providing the safe environment that our kids of all ages and grades need.”

Esquivel said the district tried to take her children away when the couple found out about their son’s broken leg and threatened to alert immigration authorities about her husband. Only after hiring an attorney did the couple received the video from the bus that showed another student breaking their son’s leg, she said.

“You have denied information, erased videos, blamed families and (done) anything else you possibly can to cover up because you do not want to take responsibility for what went wrong under your care,” she said.

Esquivel sued the district before settling the dispute out of court.

Valerie Webster lost her daughter to suicide after enrolling her at a Clark County middle school where she said a teacher’s aide repeatedly bullied and made fun of the students.

Her daughter, Nazareen Drummond, was born with a rare disorder called neurofibromatosis and had physical deformities on her leg and foot.

“There was never anybody that she met that didn’t love her and that she didn’t love,” Webster said, holding back tears. “Until I put her in this one middle school. She was only there for four months, and she told me how bad it was with this teacher’s aide.”

Nazareen expressed self-loathing in a note she wrote before she died at age 15, Webster said. She mentioned the teacher’s aide, who had told her she could not remember anything.

“Jokes are jokes, words are words, but they can (really) hurt someone,” Nazareen wrote — words that her sister wore on the back of a T-shirt at the gathering.

Webster said she is considering legal action over her daughter’s death.

‘It brings a lot of torment’

Unique Barnett said she did not realize her son’s teacher at Thiriot Elementary School was hitting students with a stick until Child Protective Services workers requested an interview with him.

“It brings a lot of torment to my son to go back to school,” she said. “He’s worried about if the teacher is going to whoop him. He’s already suffering from a learning disability and just to have this be another thing that he has to go through is really devastating to me as a parent.”

School police say they are still investigating a teacher at Thiriot accused of abusing students.

Special education parents have routinely expressed similar concerns with the district both in and out of court.

In May, Joshua and Britten Wahrer sued the district, alleging that their son suffered severe neglect and abuse while at Harmon Elementary School, including, the lawsuit said, abuse that his teacher Melody Carter inflicted on him with a pointer stick.

After Carter was arrested in 2018, the couple wanted their son to wear a location- and video-monitoring device to school, but the request was denied by the district.

The district said in a statement that it is unable to discuss individual student matters and does not comment on pending litigation.

“Additionally, devices such as Angel Sense are reviewed on a case by case basis,” a spokesman wrote in an email.