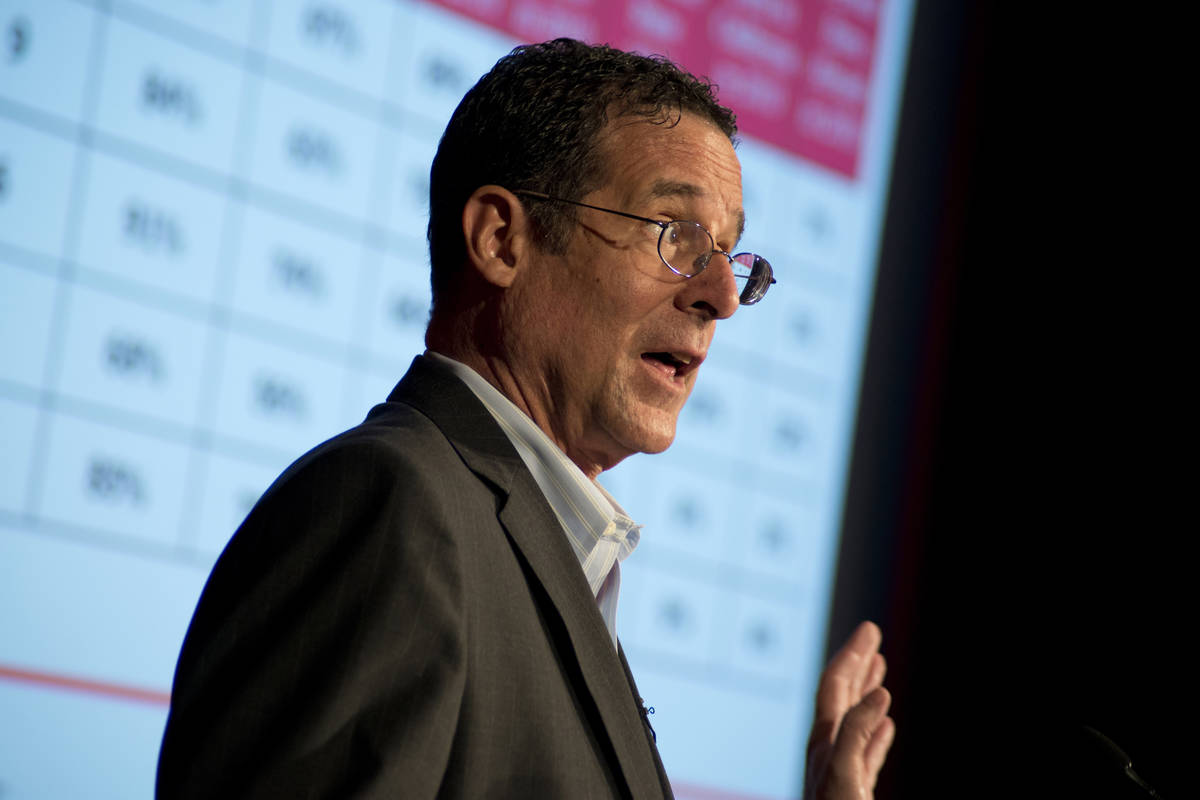 In this Nov. 25, 2016, file photo, UNLV Professor of Urban Affairs, Robert E. Lang speaks during a post-election analysis of voter trends inside the Greenspun Hall Auditorium at UNLV. A university spokeswoman confirmed on Tuesday that Lang had died. (Las Vegas Review-Journal, file) 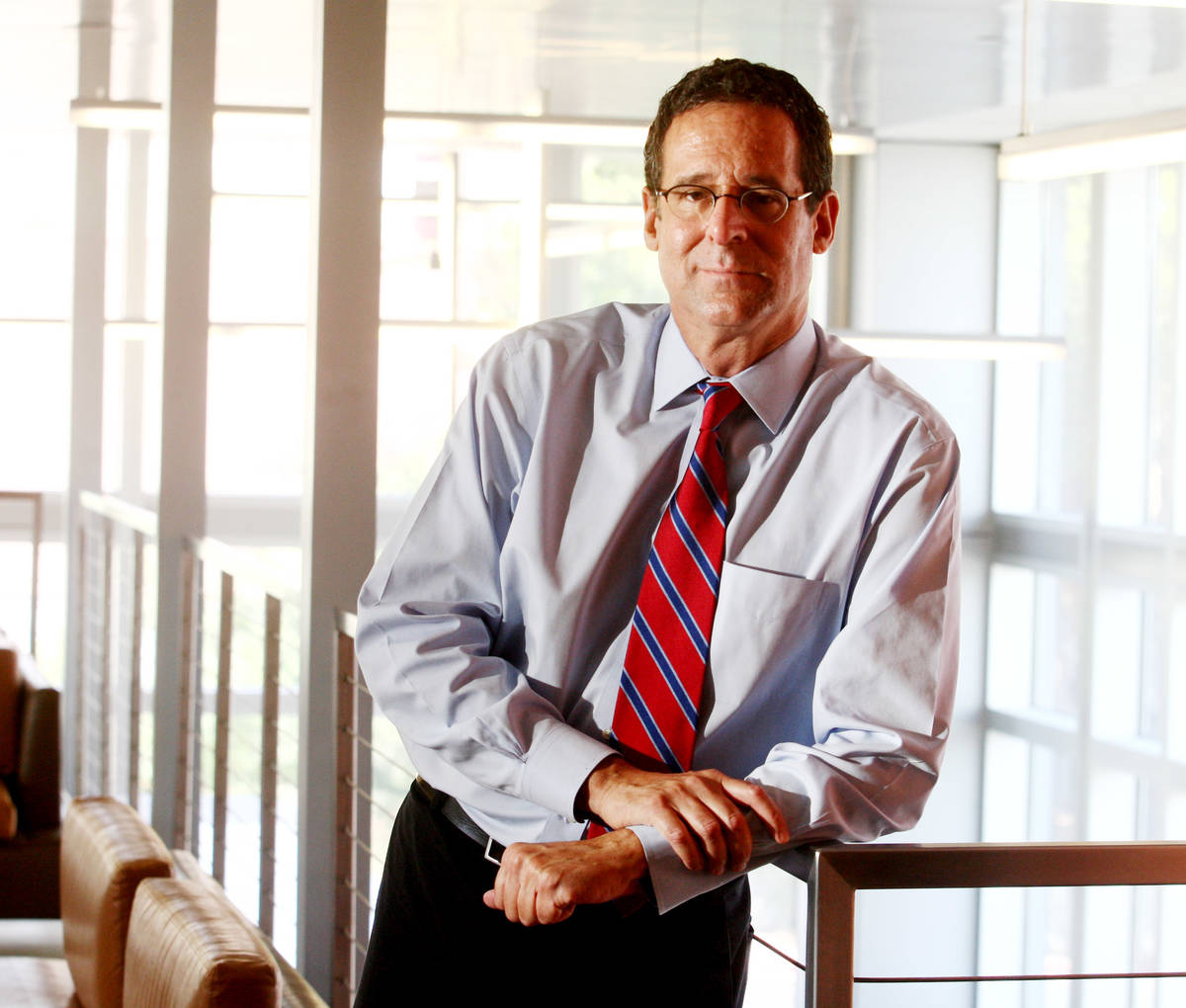 Robert E. Lang, a UNLV professor credited with helping Las Vegas recover from the Great Recession and diversify its economy, died Monday of complications from cancer. He was 62.

Lang was executive director of both the public policy think tank The Lincy Institute and Brookings Mountain West, a partnership between UNLV and the Brookings Institution, a Washington, D.C.-based research organization. He also was a public policy professor at UNLV.

In a letter sent Tuesday to the university community, UNLV President Keith Whitfield called Lang “one of Southern Nevada’s most passionate champions and advocates.”

Lang helped draft a plan to diversify the state’s economy and was “a staunch advocate for improved transportation infrastructure both in Southern Nevada and between our community and Phoenix,” Whitfield said.

“As I’ve come to know Las Vegas in my relatively short time here, I’ve learned that there were few — if any — who worked as hard … to both highlight our region’s vast economic potential and transform public policy to help us achieve it,” he wrote.

Nevada Gov. Steve Sisolak said in a statement that he was “deeply saddened” to learn of Lang’s death.

“Dr. Lang was a public policy leader in Nevada whose deep academic acumen and expertise helped push our state forward over the years in a number of policy areas,” he said. “Additionally, it was his strategic and relentless commitment to economic development that has set Southern Nevada on the path forward of advancement.”

‘Fingerprints are all over Las Vegas’

During the Great Recession, Lang and his colleagues at Brookings Mountain West identified industries and infrastructure that Southern Nevada was lacking, according to the statement.

“He was a leading proponent of economic development and leveraging our strengths to move our community forward” and served as a bridge between the academic and business communities. “Rob’s fingerprints are all over Las Vegas,” it said. “His partnership with the Vegas Chamber spanned over a decade. Without Rob Lang, Las Vegas would not be where we are today.”

Tina Quigley, former CEO of the Regional Transportation Commission, said Lang was an important “influencer” when it came to transportation issues.

“In many ways he forced us to grow up and think bigger as a western region,” she said. “From a transportation perspective, his legacy will live on in Interstate 11, which he was a tremendous force behind, the Maryland Parkway Rapid Transit project that is now in pre-construction, and fiscal policy reforms that helped Southern Nevada regain its fair share of state funding.”

Lang, who earned a doctoral degree in sociology from Rutgers University in New Jersey, came to UNLV in 2010, after serving as an urban planning professor and chair at Virginia Tech and as a senior director of urban and metropolitan research at Fannie Mae in Washington, D.C., among other positions.

His biography on UNLV’s website describes him as an “internationally recognized authority on urban growth, economic development and population dynamics, including the interplay between politics and growth in America’s metropolitan areas.”

Karen Danielsen-Lang, his wife of 41 years and an associate professor in UNLV’s School of Public Policy and Leadership, said her husband had a relationship with the Brookings Institution for years before the organization asked him to take charge of the new Brookings Mountain West.

“We had always wanted to move west, but he thought it would be a really good opportunity,” she said, noting her husband had studied Nevada for a while. “He was given this opportunity and he thought he would have an impact here.”

When he arrived in Las Vegas, there were five things he wanted to work on: opening a medical school, building a sports stadium, developing a light-rail system, expanding the Interstate 11 project and obtaining R1 research status for UNLV, Danielsen-Lang said.

All but one of those projects — an expanded light-rail system — came to fruition during his time here.

“He also recognized that this town actually grew almost so fast that all the institutions that usually come with a city this size hadn’t caught up with it,” Danielsen-Lang said.

Lang was one of those people who comes only once in a generation — someone who could have a vision and bring it to reality, said Maureen Schafer, CEO of the Nevada Health and Bioscience Corp., which is overseeing UNLV’s medical education building project.

“He was that person for our community,” she said. “He’ll be greatly missed.”

Schafer was the original chief of staff at UNLV’s medical school and worked with Lang on pursuing the first state appropriation for the school. At the time, Las Vegas was the last metropolitan area in the country without a medical doctor-degree granting medical school.

Lang built the case for having a medical school in Southern Nevada tied to UNLV by explaining the economic impact, including bringing jobs to the area, Schafer said. “That turned heads and that was able to allow this community to say, ‘It’s time for a medical school.’ ”

The medical school opened in 2017 and graduated its first class of 50 students in May. A medical education building, the school’s first permanent facility, is under construction on Shadow Lane and is scheduled to open in summer 2022.

Medical school founding Dean Dr. Barbara Atkinson said in a Tuesday statement that Lang was “a dear friend and colleague who was integral in the formation of the UNLV School of Medicine.”

“Very early on, he recognized that for Las Vegas to truly become a world class city, we needed to improve health care,” Atkinson said. “He helped educate decision makers about the benefits of a medical school by finding money for an economic impact study that was critical in garnering the necessary support. Throughout the school’s start-up years, he was a key consultant, helping people like me understand the community and culture of Southern Nevada.”

North Las Vegas Mayor John Lee said Lang also worked with him and now-City Manager Ryann Juden to develop a plan to help the city recover from the recession.

“And so I followed that plan to a T,” Lee said. “We’d adjust it from time to time, but that is how North Las Vegas actually got out of the hole, was me surrounding myself with such wonderful, intelligent people who cared about me and cared about the community.”

Lang saw Southern Nevada as a blank canvas to do things right the first time by drawing on his knowledge of other parts of the country, Juden said.

“I hope that we continue to think big and to be unafraid, like Rob was,” Juden said.

‘Never strayed from a fight’

Lang was a “towering figure in translating rigorous policy research into real reforms that state and local governments could implement,” said John Hudak, senior fellow at the Brookings Institution and a frequent contributor at Brookings Mountain West.

His influence extended far beyond Nevada and “served as an international model for harnessing the resources of a larger think tank to take on state and local issues in ways that has a positive impact on the most vulnerable in our society,” Hudak said in a Tuesday email to the Review-Journal.

Lang never left you guessing what he thought about an issue or event, Hudak said, and could ruffle feathers. “But his goal was always to advance the common good, even if it meant disagreeing with powerful forces.”

Danielsen-Lang said she and Lang were both born in the New York borough of Brooklyn and met while they were in college.

Danielsen-Lang said that if her husband thought something was worth fighting for, he wasn’t afraid to confront people. “He never strayed from a fight,” she said.

She described him as passionate and someone who was good at persuading people by talking with them.

“He didn’t like to talk over people’s heads,” Danielsen-Lang said, adding that he tried to make concepts understandable so people understood the benefits of a given policy. She said his passion rubbed off on people.

She said her husband was generous with his time and was a mentor to students. And he always loved politics, she added.

The couple has a son, Aidan, who will turn 20 in a few weeks. He was attending Whittier College in California but plans to attend UNLV in the fall.

Danielsen-Lang said a memorial service for her husband will be held, but a date had not yet been set.

Contact Julie Wootton-Greener at jgreener@reviewjournal.com or 702-387-2921. Follow @julieswootton on Twitter. Review-Journal staff writers and Mick Akers and Blake Apgar and politics and government editor Steve Sebelius contributed to this report.