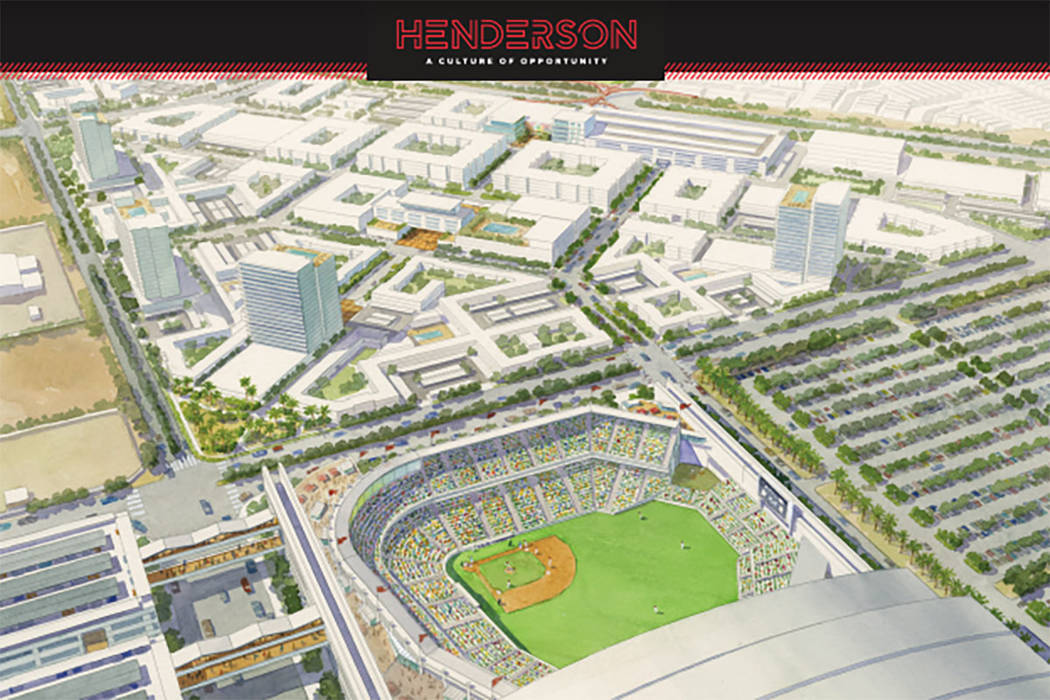 Henderson has its eye on the big leagues.

Last year, Henderson officials quietly began a push to lure the Arizona Diamondbacks from the team’s Phoenix home to their city, records obtained by the Las Vegas Review-Journal show. Although discussions have stalled, the move signals Henderson’s desire to grow as a professional sports-caliber city.

“While a proposal for an Arizona Diamondbacks ballpark has not moved forward, the city of Henderson would welcome conversations with other major league franchises that may be considering a move to a different market,” the city said in a statement this week.

In a subsequent email, the city clarified it would be open to talking with any professional sports team looking to relocate.

Discussions between Henderson and the baseball team indicate that the city had put significant effort into its presentation. City Manager Richard Derrick signed a nondisclosure agreement dated July 31, 2018, with the Diamondbacks.

In a slideshow submitted to the team, officials highlighted what they thought could come of a major league ballpark and surrounding development.

Renderings show a retractable-roof baseball stadium near St. Rose Parkway and Bermuda Road in rapidly growing west Henderson, which city officials envision as a hub for sports and entertainment. The proposed site, one of four floated by the city, sits behind the future headquarters and practice facility of the NFL’s Raiders.

According to the presentation, Henderson hired a consultant to conduct a financial analysis, assuming the ballpark would have 32,000 seats and space for 4,000 standing-room-only ticket holders. The Diamondbacks would serve as the primary tenant for a 30-year term and the stadium would be publicly owned and exempt from property tax.

The consultant estimated the ballpark would cost about $1 billion to construct.

The proposal called for the ballpark to be near Henderson West, a planned development that would include retail, offices and residential buildings.

“I hope, above all else, (our submission) reflects the pride that we take in our community and our ardent belief that a partnership with Major League Baseball is not only viable but provides great opportunities for our city and your organization,” Henderson Mayor Debra March wrote in a cover letter to the Diamondbacks’ chief executive.

Potential developers listed in the proposal included Las Vegas Sands Corp. and Marnell Companies. The city said the developers were not privy to details and had not made any commitment.

A Las Vegas Sands Corp. spokesman declined to comment, and a representative from Marnell was not immediately available.

The Diamondbacks would not answer specific questions about whether Henderson is being considered as a potential new home.

“A number of cities have expressed interest but we have not pursued any because we have not received permission from MLB and our desire is, first and foremost, to stay in Arizona,” the team said in a statement.

The team’s president and CEO, Derrick Hall, exchanged emails with Derrick, the city manager, over the course of months, records show.

The Diamondbacks expressed interest in creating a development at a potential new home, pointing to the entertainment district near the Atlanta Braves’ SunTrust Park as inspiration, according to documents that detailed the team’s wish list for prospective suitors.

On Nov. 13, 2018, Derrick emailed Hall to check on the team’s progress and invite him to Henderson. Hall responded that the inquiry was “timely” because he was attending the owners meeting in Atlanta and would likely see the MLB commissioner.

“Did the elections help your case?” Hall wrote.

“I believe so. … The new governor (Gov. Steve Sisolak, elected in November 2018) was our past county commission chair and was instrumental in helping to craft the deal that lured the Raiders to the state,” Derrick replied. “Lots of potential!!!”

J.A. Kennedy Real Estate Co. is associated with Soro LLC, which owns the land depicted in the renderings.

Talks with Henderson came months after the Diamondbacks struck an agreement with Maricopa County in Arizona to resolve issues surrounding its aging downtown Phoenix ballpark.

Under the May 2018 agreement, the team would drop a lawsuit against the county, have sole control of ballpark operations and maintenance, and keep all revenue from the stadium, which it has leased through 2027.

But it also allowed the team to pay to leave Maricopa County as early as the conclusion of the 2022 season. The team, however, would have the opportunity to leave the ballpark earlier without a penalty if required by Major League Baseball because of the condition of Chase Field.

Last year, Henderson secured a deal for the Raiders to build a headquarters building and training facility. The team got a 50 percent markdown on a 55-acre plot of land across the street from the Henderson Executive Airport.

In May, the city finalized a deal for a Vegas Golden Knights community ice arena in downtown Henderson. That facility will be built, in part, with public money.

The city said it ultimately views itself as capable of drawing major sports franchises because of a business-friendly approach, attractive demographics, socioeconomic characteristics and available land.

Still, Henderson spokeswoman Kathleen Richards said this week that the city has not heard “official word” from the Diamondbacks on whether the project could move forward. The two sides were in discussions as late as February, records show.

On Jan. 4, Hall, the team’s CEO, sent Derrick an email with the subject line, “Have not forgotten you!”

“Hopefully there is still strong interest there as we go through the MLB motions,” he wrote.

Derrick, the city manager, responded: “Very strong interest…looking forward to working with you. Let me know how we can prepare for any next steps.”

Expression of Interest by Las Vegas Review-Journal on Scribd