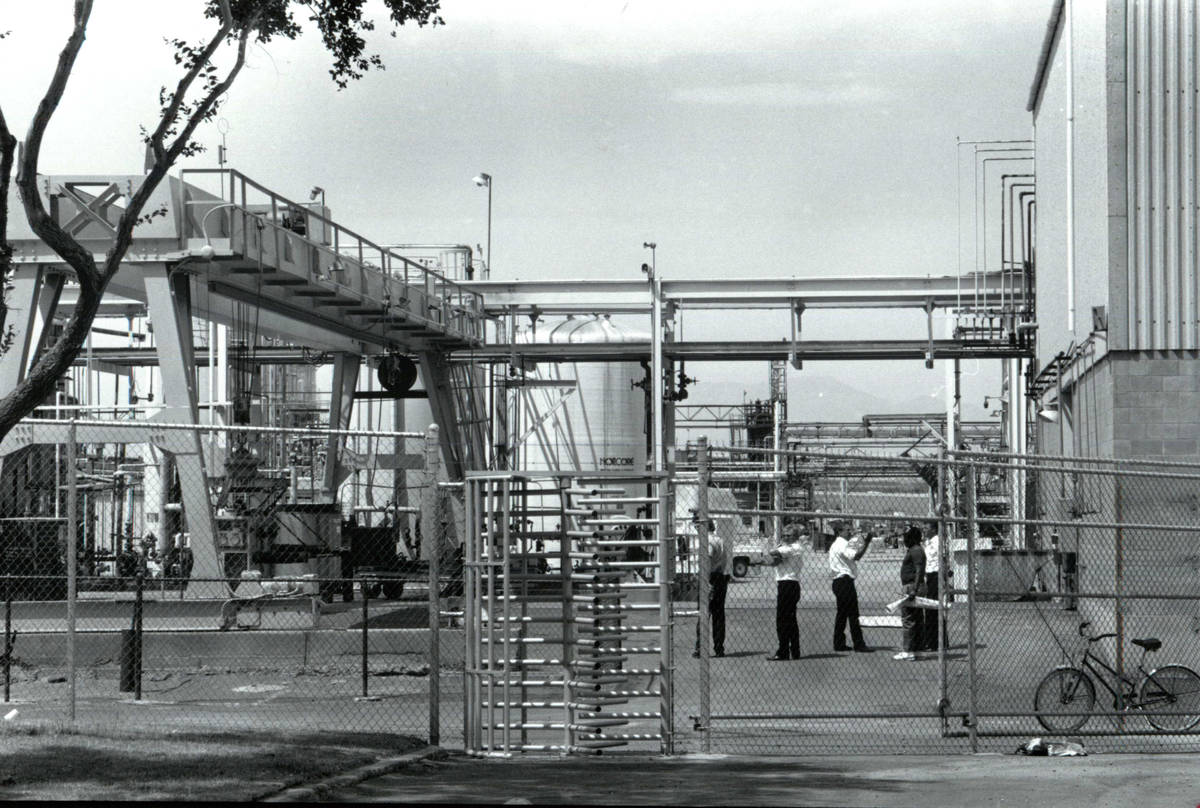 Fire Department officials enter the Pioneer facility, minutes after the all clear was given on May 6, 1991, in Henderson. (Jim Laurie/Las Vegas Review-Journal) 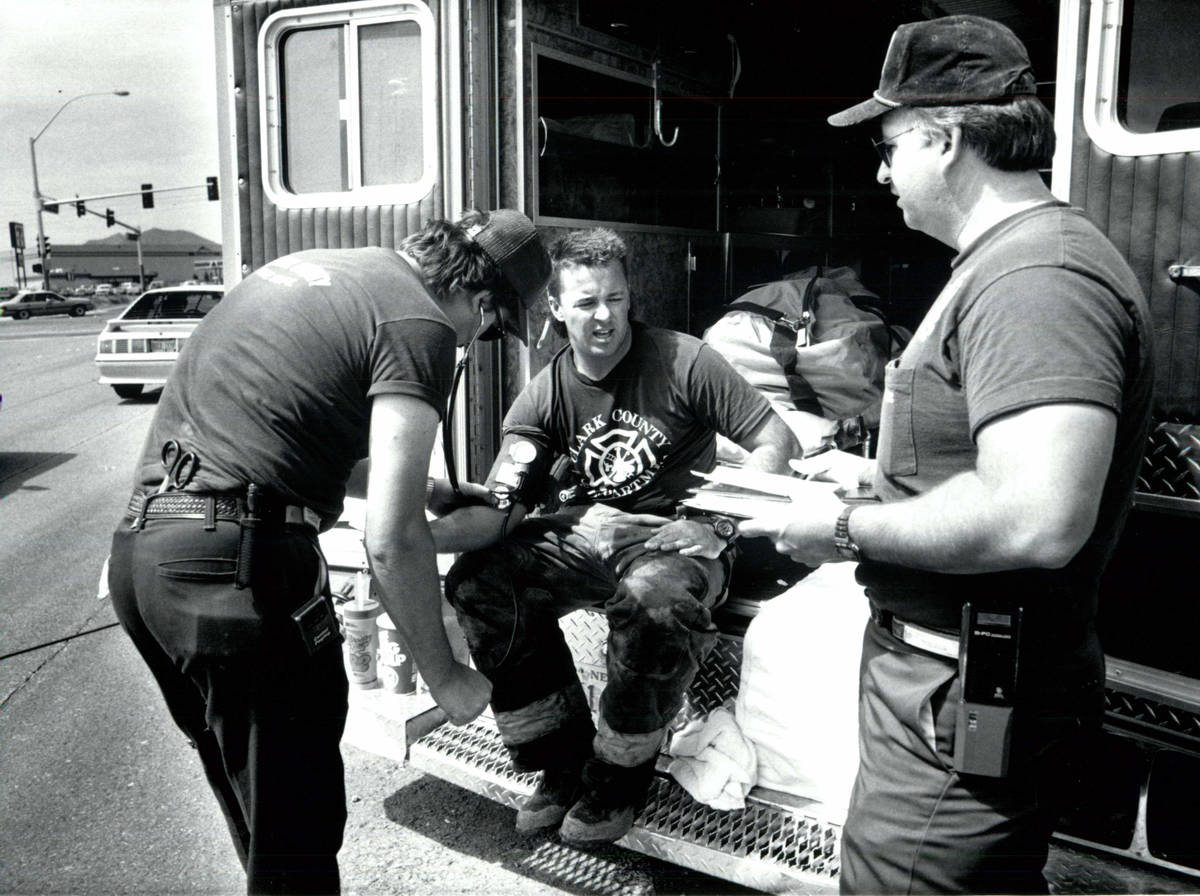 Firefighter Kevin Steele (center) has his pulse checked May 6, 1991, after a chlorine leak in Henderson. (Jim Laurie/Las Vegas Review-Journal) 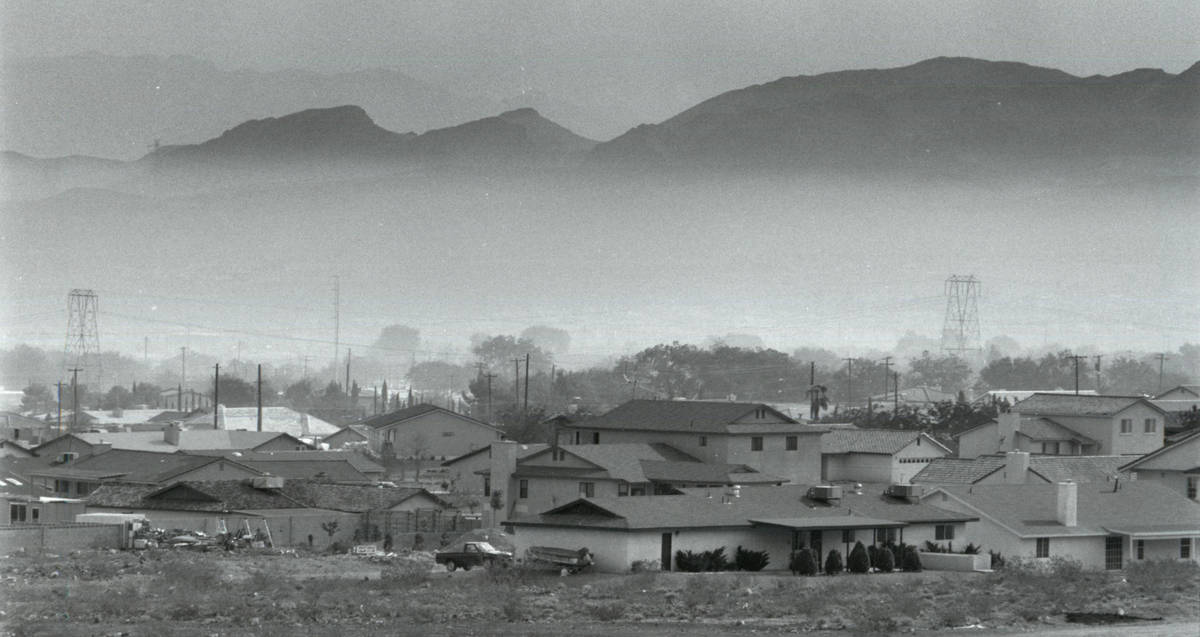 A cloud hovers over Henderson after the Pioneer Chlor Alkali Co. chlorine leak on May 6, 1991. (Jim Laurie/Las Vegas Review-Journal) 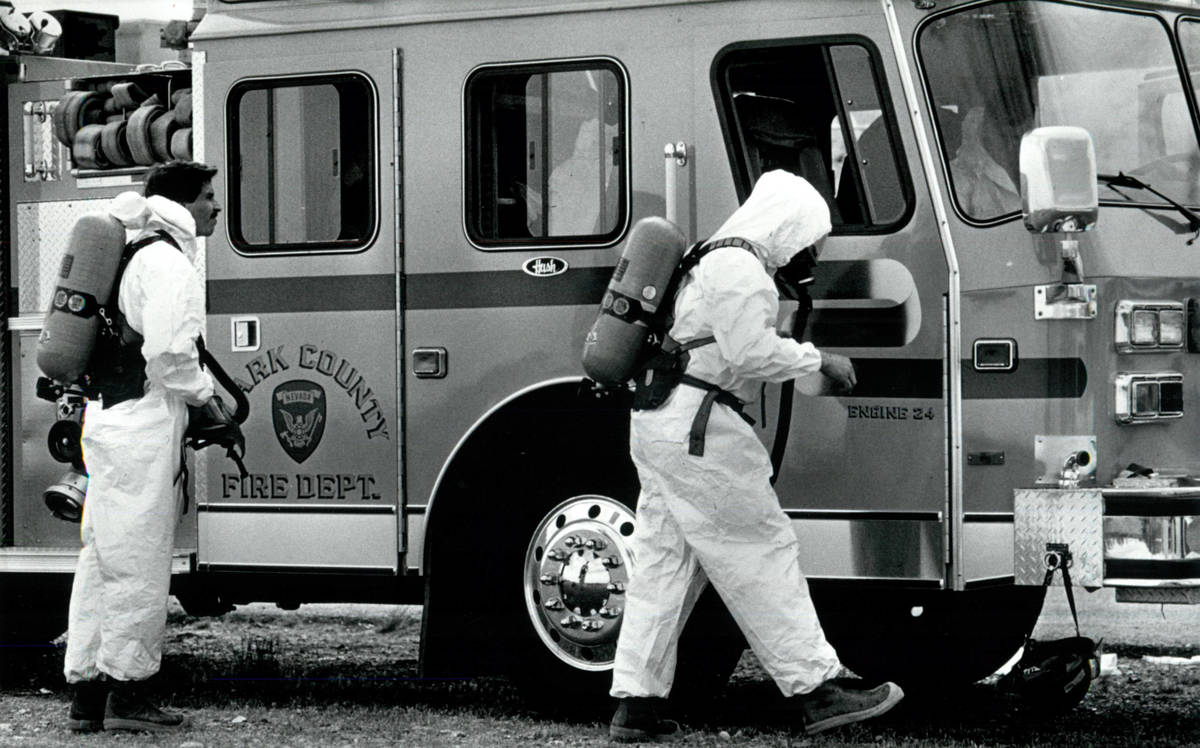 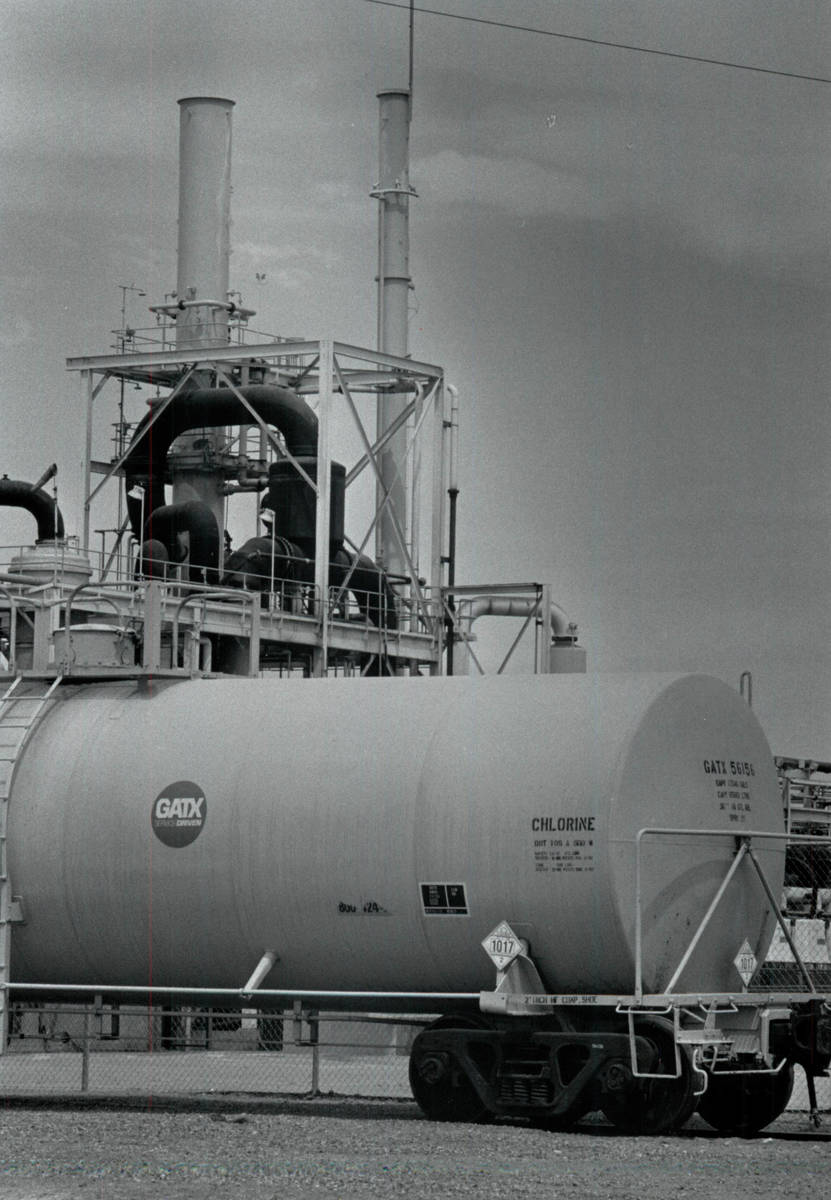 A view of the Pioneer Chlor Alkali Co. on May 6, 1991, in Henderson. (Jim Laurie/Las Vegas Review-Journal) 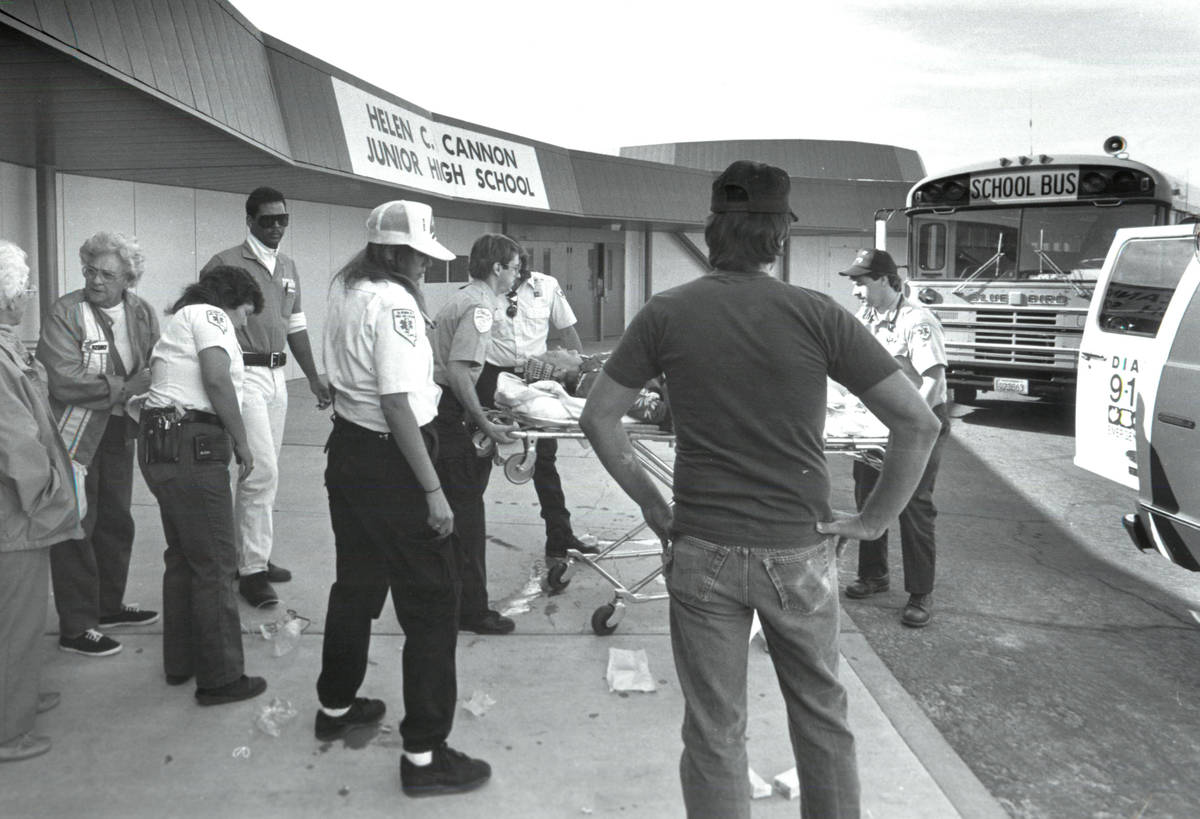 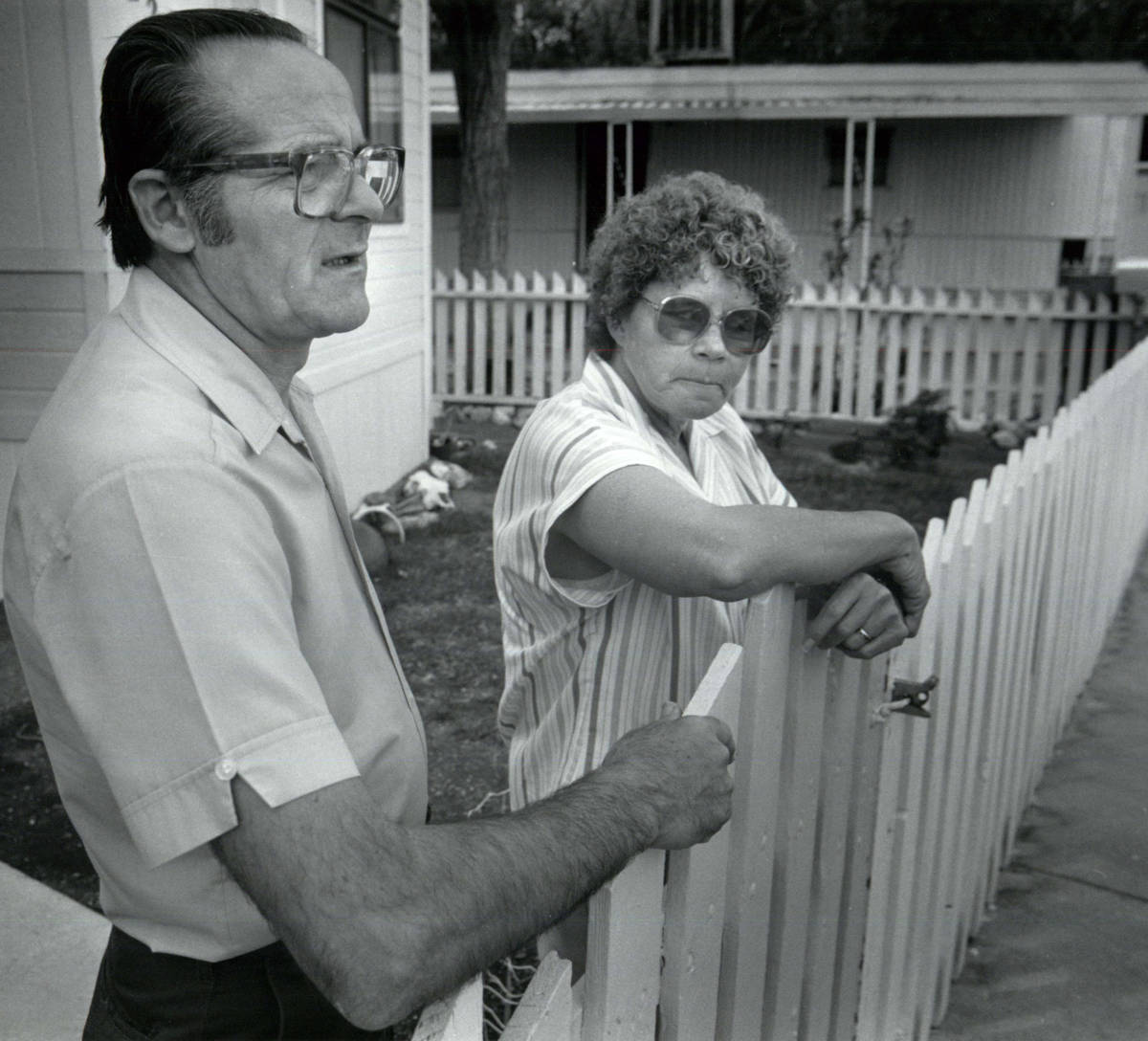 Residents close to the leak stand outside a home on May 6, 1991, in Henderson. (Las Vegas Review-Journal/File) 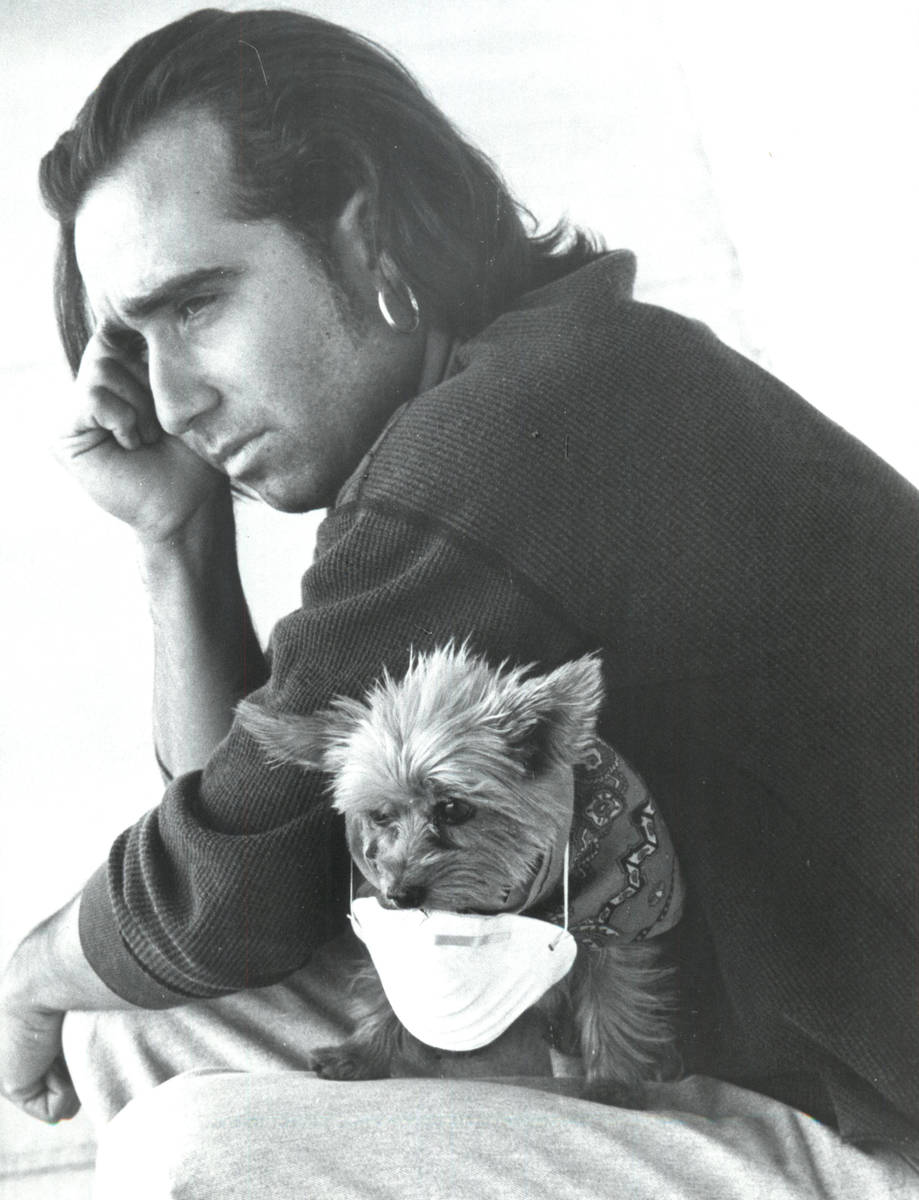 Mark Freeze and his dog, Jajmin, sit outside outside Helen C. Cannon Junior High School on May 6, 1991, in Henderson. (Las Vegas Review-Journal/File)

The chlorine leak that forced thousands of evacuations and sent hundreds of people to hospitals started through a pinhole.

Thursday marks 30 years since that pinhole at the Pioneer Chlor Alkali Co. plant near downtown Henderson grew in the early morning darkness.

“But the extent of how big the problem was really wasn’t known until things started to come into focus in daylight, when you can see this huge massive cloud out there lingering over the valley,” said Keith Rogers, a former Las Vegas Review-Journal reporter who responded to the contaminated area on the morning of May 6, 1991.

Estimates of how much chlorine was released have varied in reports over the years, but according to the Federal Emergency Management Agency, about 70 tons escaped the plant, blanketing part of Henderson and eastern Las Vegas with a toxic green cloud.

Some 700 people were sent to shelters to escape exposure to the gas, and an estimated 2,000 to 7,000 more were taken elsewhere, according to a report from FEMA. About 250 people were evaluated at emergency rooms, and 30 were admitted into hospitals.

No one died from the gas cloud.

“And there was not a lot of rumble from traffic or din of people moving around in the morning like there would usually be,” Rogers said.

The evacuations gave way to an eerie silence. The toxic haze sent green leaves falling to the ground.

Automatic monitoring equipment detected the leak at 1:10 a.m., but employees thought they could handle the issue without the leak creating a hazard at the plant or in nearby areas, according to the FEMA report.

The first report to authorities came at 1:50 a.m. from a passerby who called Henderson police and reported a strong smell by the industrial complex situated on Clark County land that is surrounded by the city of Henderson. Odors in the area were common, so a battalion chief with the Clark County Fire Department waited until receiving a stronger report before responding to the area.

At 2 a.m., another caller reported a strong odor in the area, prompting the Clark County Fire Department to respond. Because of the distance between the complex and the fire station, 14 minutes passed before the first units arrived.

Employees said they were isolating the leak and shutting down the plant, thinking they could handle the situation. They thought no more than 1,000 pounds of chlorine could escape the system.

“Based on this information, there was no point in risking personnel to take additional leak control actions,” the FEMA report states.

Additional investigation found a valve had been corroded, allowing a steady stream of chlorine to reach the leak.

Cool, dry conditions and low wind allowed the growing gas cloud to linger without blowing away. By 3:30 a.m., conditions had worsened, and 15 minutes later, a state of emergency was declared in the county.

Clark County Fire Chief John Steinbeck worked the chemical leak as a young firefighter, helping with evacuations. From his house in the western Las Vegas Valley, he could see the cloud that had formed.

“It was an ominous cloud,” he said. “It was a green, low-lying cloud in the southeast portions of the valley, and thick.”

Retired Henderson Police Chief Tommy Burns, then a lieutenant, was called in early that morning.

He took the lead as incident commander for the Police Department at a command post at Burkholder Middle School, the same place where emergency responders set up a command area for the PEPCON explosion, a deadly blast that occurred in the area three years earlier.

Police officers were tasked with evacuating areas projected to be contaminated with the gas.

“I think we were using bullhorns, probably, because we were a small department then,” Burns said. Henderson police lacked the resources for door-to-door evacuations, he said.

Meanwhile, off-duty firefighters were called in to drive school buses to help with evacuations, according to the FEMA report.

Linda Tinoco, who lived on Boulder Highway near the plant, was among those who did not evacuate.

Tinoco said she remembers her neighbor coming over and asking if she felt sick. The gas caused Tinoco to feel nauseated. It also caused her new roses to die.

The rising sun revealed the extent of the leak, prompting firefighters and plant employees to go inside the facility and install a solid plate within the piping system to block the leak.

Emergency response employees at the plant could not access most of their gear because it was in the facility where the leak was happening. Another chemical plant in the area provided the necessary equipment for the employees, who re-entered the facility to stop the leak.

The first attempt at about 6:30 a.m. was unsuccessful because the plate was damaged before it could be secured within the piping.

Another attempt an hour later was successful in stopping the leak. As the temperature outside climbed and wind picked up, the cloud began to dissipate, and by 10 a.m., people who had evacuated were allowed back into their homes and businesses.

Most of the chlorine readings recorded that day were below what would be life-threatening or put most people’s health in danger, according to FEMA.

The majority of people who were taken in for medical evaluations recovered quickly outside the contaminated area, but some with existing breathing problems had severe reactions to the toxic gas. Several police officers and firefighters were exposed to the gas and were taken to hospitals.

According to the report produced by FEMA, officials believe a tube failed in a heat exchanger, allowing water to mix with chlorine and creating a corrosive acid that ate through the steel pipe. Pioneer Chlor Alkali disclosed to regulators in 1991 that rags clogged a heat exchanger, leading to the leak.

The plant never called police or fire personnel to report the leak, but did request a private ambulance company to take plant employees to the hospital, according to the FEMA report. 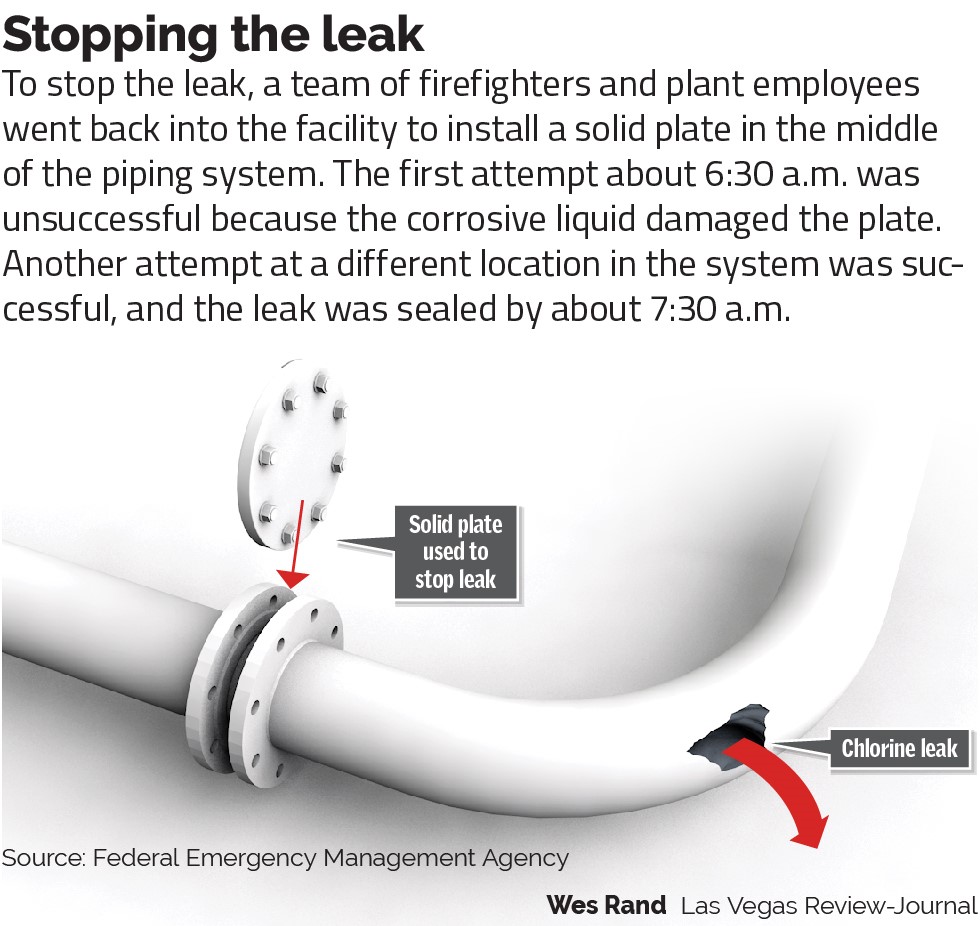 In the year after the leak, Pioneer Chlor Alkali spent nearly $3 million on plant upgrades, settlements and donations to avoid civil and criminal penalties. The company settled 5,000 claims associated with the leak and Pioneer Chlor Alkali agreed to pick up the bills of all the people who sought medical treatment.

The leak also prompted legislation to regulate users of hazardous chemicals in the state.

In 2007, Pioneer merged with Olin, and in 2016, Olin announced it would stop producing chlorine at the plant near downtown Henderson, modifying operations to produce bleach instead.

Olin did not respond to a request for comment.

The industrial accident spurred new emergency response techniques for the Henderson Police Department, Burns, the department’s former chief, said. It prompted the department to invest in an automated system that could send out emergency messages to the public.

Between the PEPCON explosion and the chlorine leak, Burns said, officials realized they did not have an effective emergency management center, so the city established a dedicated command center where public safety and city officials could gather in one room to monitor critical events.

Carlito Rayos, hazardous materials and critical infrastructure coordinator for the Clark County Fire Department, said that at the time of the leak, there were already laws on the books that set the framework for how chemical companies should work with emergency response agencies, but that framework was new at the time. The Pioneer leak underscored the need for those laws.

“And because of that, local fire departments, police departments, all public safety and industry really started working together to pre-plan response to these things,” he said.

He said agencies work together to make sure they are communicating with each other and with the public to get people out of harm’s way faster.