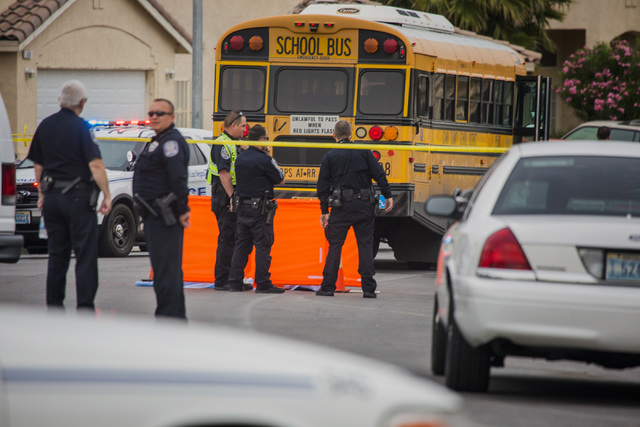 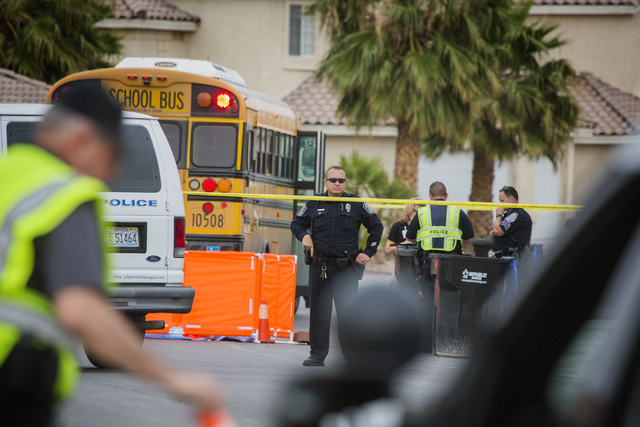 The 2-year-old struck by a school bus and killed in North Las Vegas Thursday was named Friday by the Clark County coroner. And the driver involved is cooperating with police and hasn’t been charged with any crimes.

Jose Maria Covarrubias Jr., was in the street in the 600 block of Princess Avenue, near the intersection of Carey Avenue and Commerce Street, when he was hit by a passing Clark County school bus at 3:40 p.m.

Covarrubias was pronounced dead at the scene, and the coroner determined he died from blunt force trauma to the head.

The bus left Mackey Magnet School and is reserved for special education students, Clark County School District spokesman David Roddy said. Four students were on the bus at the time of the crash, waiting to be dropped off at their homes. At least one of the students lives in the neighborhood of the crash, Roddy said.

The students on the bus were not injured and don’t seem to be aware of what happened, district spokeswoman Michelle Booth said. The principal has “personally spoken to the parents of each student who was on the bus to determine if they need crisis response counselors,” she added.

It is unclear what happened in the moments leading up to the crash, but the little boy’s family was at the scene that afternoon, behind the police tape.

This incident requires an in-depth investigation because “it’s not really clear-cut as to who is at fault,” Ann Cavaricci, a North Las Vegas police spokeswoman said.

The bus driver, whom the district and police have not named, stayed on the scene of the wreck Thursday and as of Friday had not been charged with a crime, Cavaricci said.

Some housing developments don’t allow full-size school buses in residential areas, but this particular bus was within guidelines because of its special education status.

Of the school-age pedestrians, 62 percent were struck by school buses, and 5 percent were hit by vehicles functioning as school buses. The rest died from injuries related to other types of vehicles.

When asked if the school district could provide local bus crash statistics, the district declined to release the information Friday afternoon.

Last year, a county school bus hit a pedestrian April 14 — the same date as Thursday’s crash — in the central valley. The collision near Lone Mountain Road and Rainbow Boulevard also happened about 3:40 p.m., but the pedestrian wasn’t gravely injured and no children were on the bus.

In 2012, an 11-year-old girl was struck and killed by a school bus in a northwest valley neighborhood near Ann Road at Pebble Rock Drive, west of U.S. Highway 95. The bus was carrying three students at the time of the crash, and afterward the bus driver was so distraught he didn’t leave the bus until about an hour and a half after it struck the girl.

When he did, the driver stood in front of the bus with his hands over his face, sobbing.