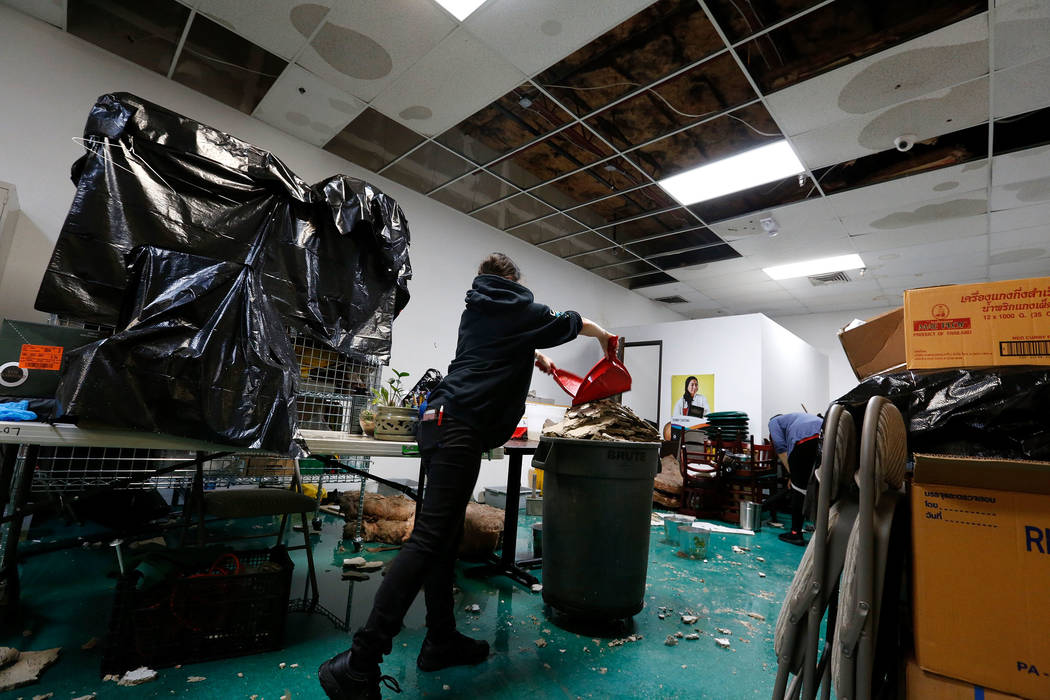 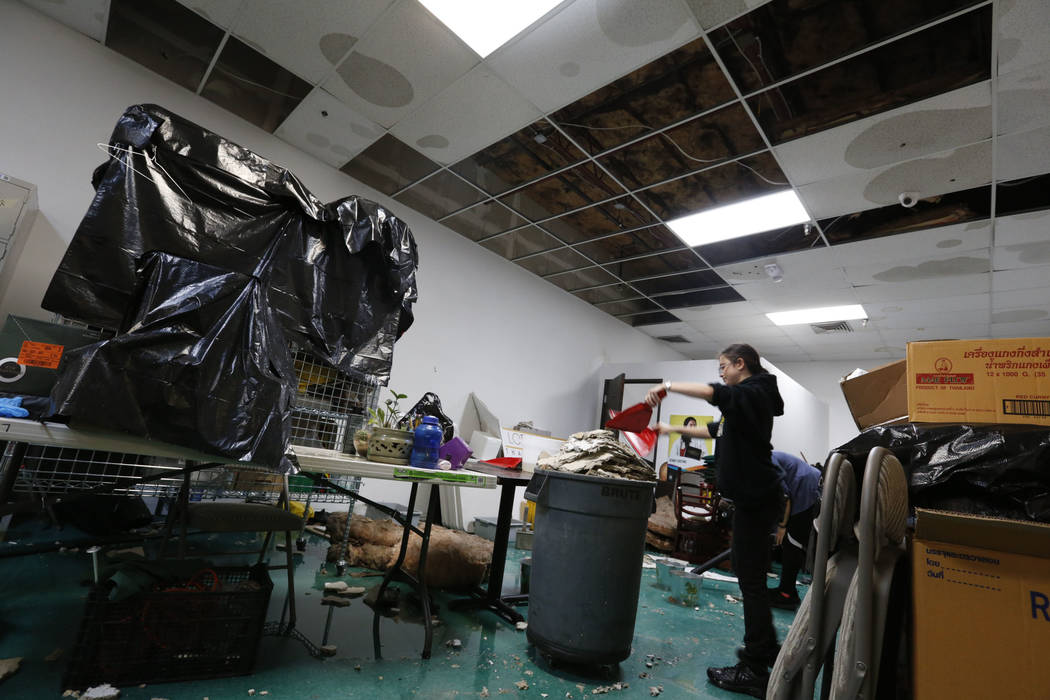 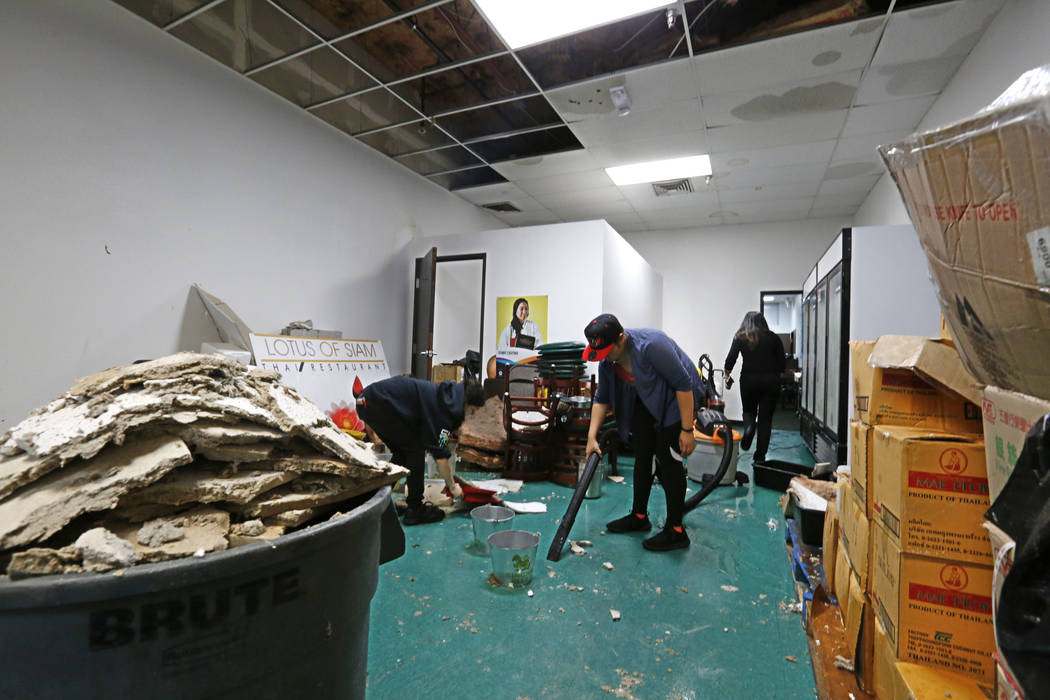 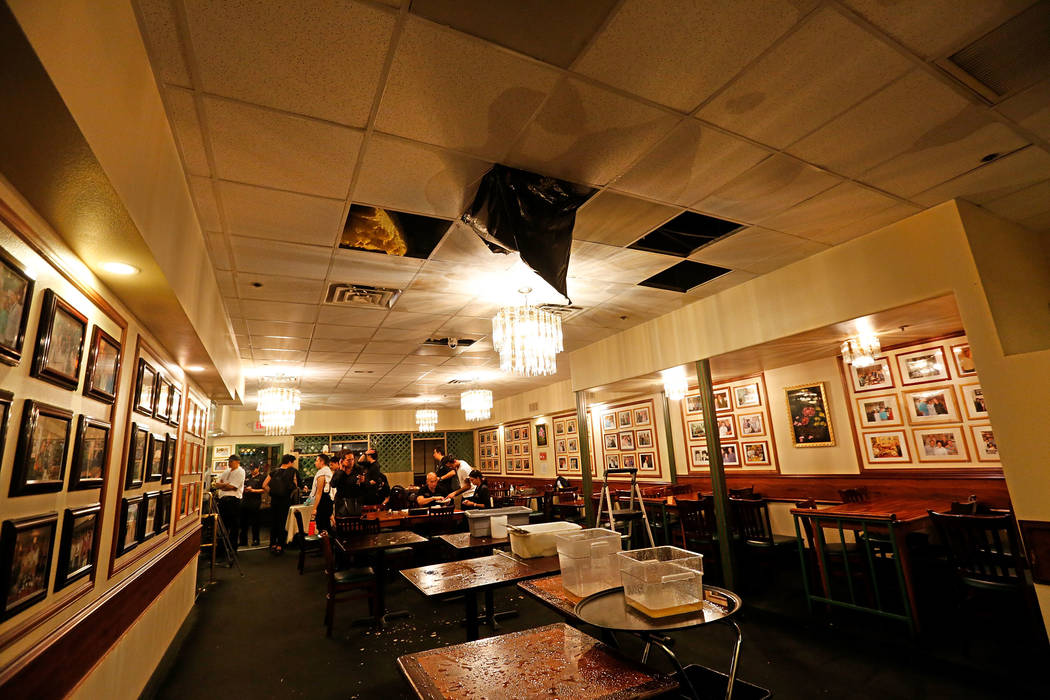 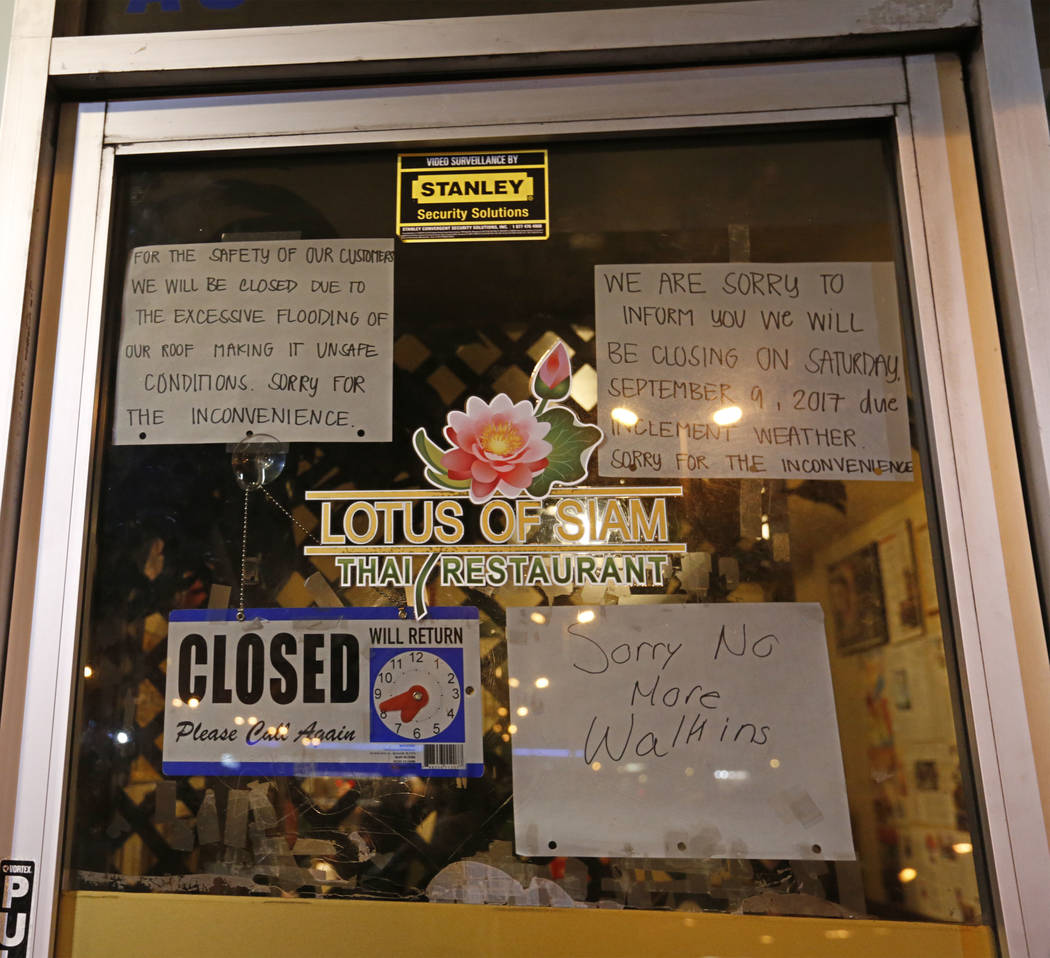 A few signs are posted at the entrance of Thai restaurant Lotus of Siam after a portion of its ceiling collapsed in Las Vegas, Friday, Sept. 8, 2017. Chitose Suzuki Las Vegas Review-Journal @chitosephoto 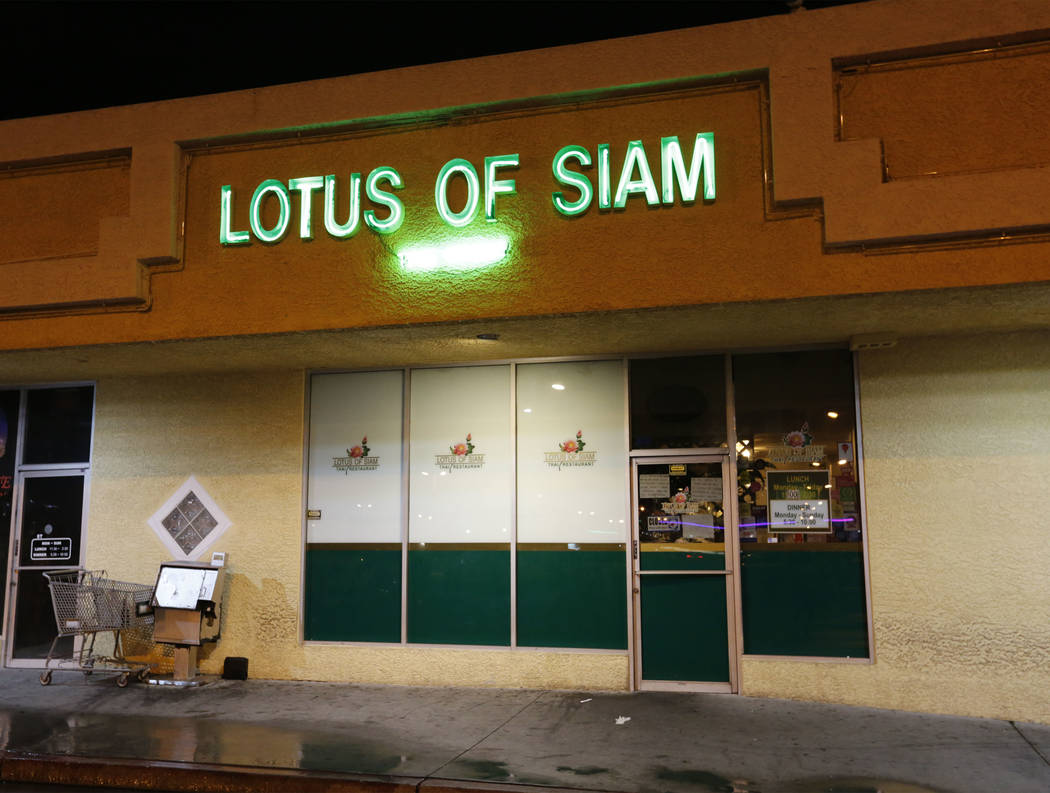 When chunks of Lotus of Siam’s ceiling caved in Friday night, Penny Chutima said she thought her famed Thai restaurant would be closed for just a week. In the daylight, the damage proved otherwise.

The manager of Lotus of Siam said she doesn’t know whether her restaurant will reopen in time to celebrate its 19th anniversary in November.

The roof of the commercial building at 953 E. Sahara Ave., constructed in 1963, surrendered to its yearlong leakage problem Friday evening after intermittent rainstorms pelted the valley.

Drip, thump, drop, thump, drip. The sound of rainwater collecting in buckets Saturday afternoon along the building’s walls was interrupted only by the thudding footsteps of construction workers, who raced to lay tarp and patch the roof leak. They wanted to mitigate damage before more rain, expected Saturday night, could fall.

“We’re gonna fix this no matter what,” said Chutima, 29. “Even without his help.”

Chutima was referring to Mark Kaufman, her landlord. Clark County property records list Kaufman as the managing member of two of the three entities that own the commercial building.

Lotus of Siam has pleaded with Kaufman for more than a year to repair the roof, she said.

This is when a landlord doesn't listen to you… pic.twitter.com/dpIU5gKjwg

Reached late Saturday, Kaufman said it’s an old building. He acknowledged Lotus of Siam and other businesses in the building need repairs. He said he managed some remedial work for Lotus of Siam last year with the goal of a new roof in the future.

“I’m embarrassed that it happened and frustrated and upset,” Kaufman said.

He said other businesses within the building were being repaired, although now Lotus of Siam will be a priority. He said he hopes work will be done by the end of the month.

Work on Lotus of Siam’s roof started about three weeks ago, he said. Overhaul could have started earlier had there not been a delay with the roofer, Kaufman said.

Chutima said she FaceTimed her landlord at precisely 7:51 p.m. Friday. She said Kaufman watched from his phone screen as the building’s ceiling collapsed.

Chutima said he told her, “I didn’t expect it to rain today.”

Kaufman offered to bring in his contractors to patch the roof after the collapse before they hung up, but Chutima declined.

“If it were up to me, this roof would’ve already been fixed,” she said. “His idea of fixing it is using spray foam.”

So Chutima called her contractor. And by Saturday afternoon, he was knocking on the doors of neighboring businesses.

When rain comes, the buckets come out

At nearby Affordable Dental, manager Hilda Carreon pointed to a large water mark in the office’s corner as Chutima’s contractor walked out.

“He told me the edge of our ceiling over there will probably fall soon,” Carreon said of the contractor. The small dental office’s ceiling showed signs of water damage.

“We’ve called so many times,” Carreon said, rolling her eyes. “The landlord is not very responsive.”

“She and I text constantly,” he said of Chutima.

Along a wall shared by the restaurant and dental office, Dr. David Ting had set out several pails to catch the remnants of Friday’s rainfall.

The dentist removed his mask and walked down the hall.

“Hey, you hanging in there?” he asked a patient before discreetly pointing out another leak in the office.

“It’s one thing to have a leaky roof and to have to replace ceiling tiles, but imagine this 8-year-old boy sitting here,” Ting said, looking over his shoulder at a patient. “If this roof lands on a client, that could be a disaster. This should be a wake-up call to the landlord.”

In the other business bordering Lotus of Siam, a dimly lit pool hall, two men stood, cigarettes in one hand, cues in the other. Behind them, a couple of buckets sat under large, dripping water stains.

Chutima said for her family, the only real solution to their problems with Kaufman is to buy the building.

“I know this is happening in the other businesses in the building, and we’ve asked him to just sell it to us,” Chutima said.

Kaufman has denied the request, she said.

“He never responds to us. But to this, he said no,” she said.