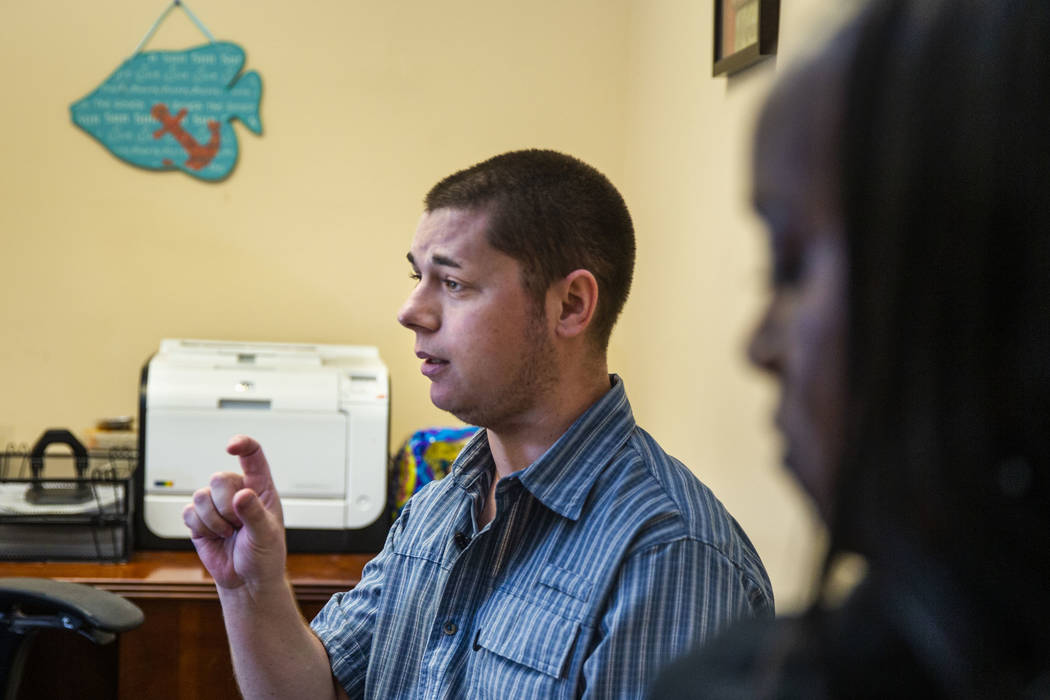 Joshua Domsky talks beside counselor Kairo Henderson about the progress he has made as a patient at the Adelson Clinic for Drug Abuse Treatment & Research, on Tuesday, Feb. 10 2020, in Las Vegas. (L.E. Baskow/Las Vegas Review-Journal) @Left_Eye_Images 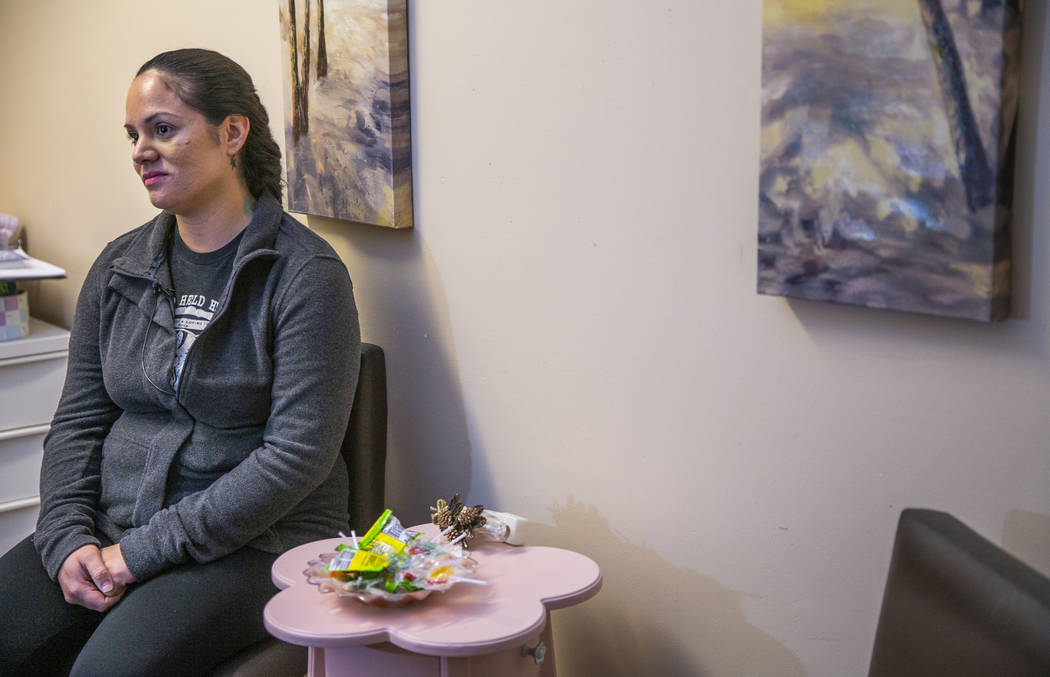 Crystal Clamenza talks about her journey as a patient at the Adelson Clinic for Drug Abuse Treatment & Research, on Tuesday, Feb. 11, 2020, in Las Vegas. (L.E. Baskow/Las Vegas Review-Journal) @Left_Eye_Images 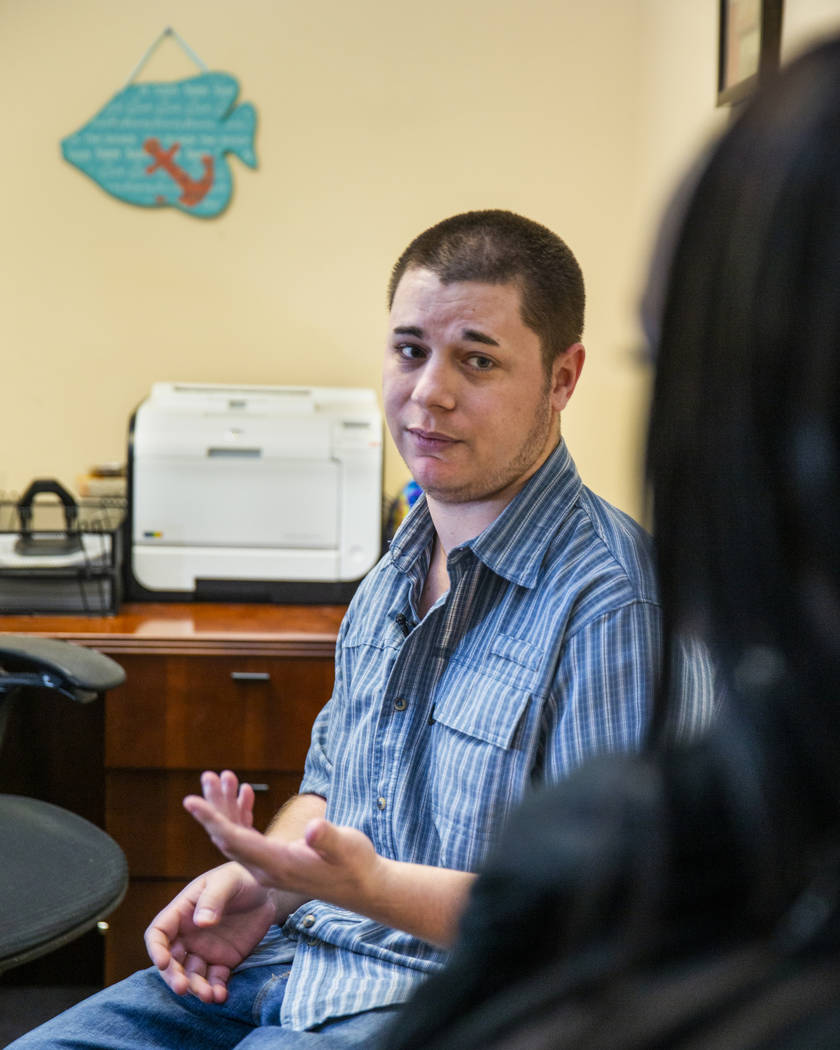 Joshua Domsky talks with counselor Kairo Henderson about the progress he has made as a patient at the Adelson Clinic for Drug Abuse Treatment & Research, which will celebrate its 20th anniversary on Friday, on Tuesday, Feb. 11, 2020, in Las Vegas. (L.E. Baskow/Las Vegas Review-Journal) @Left_Eye_Images 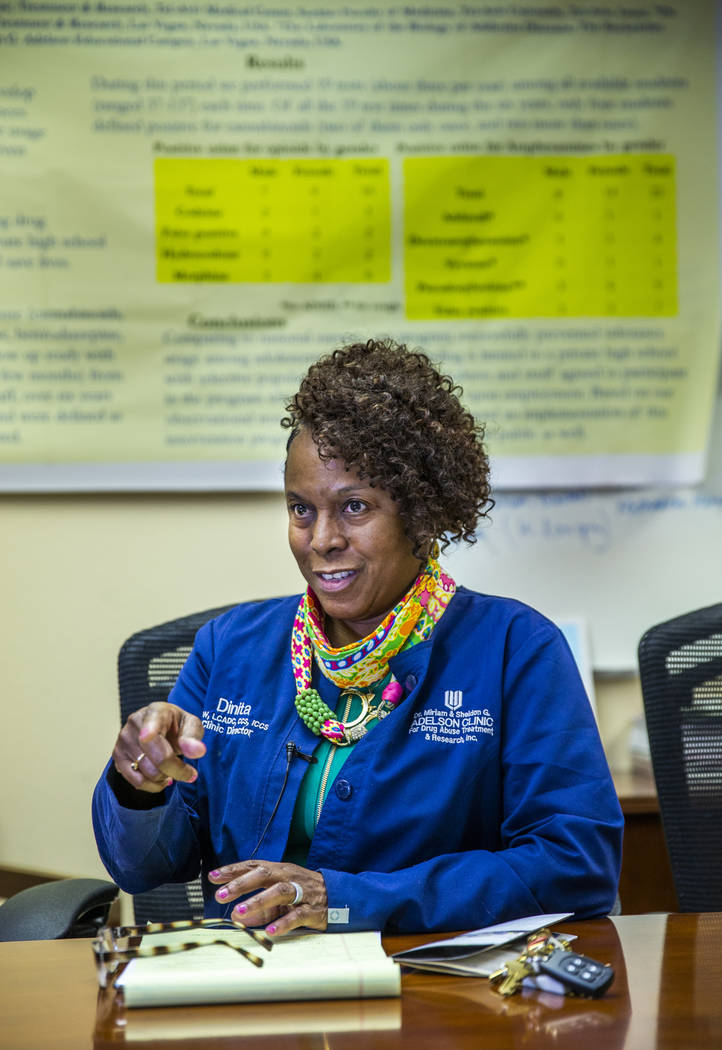 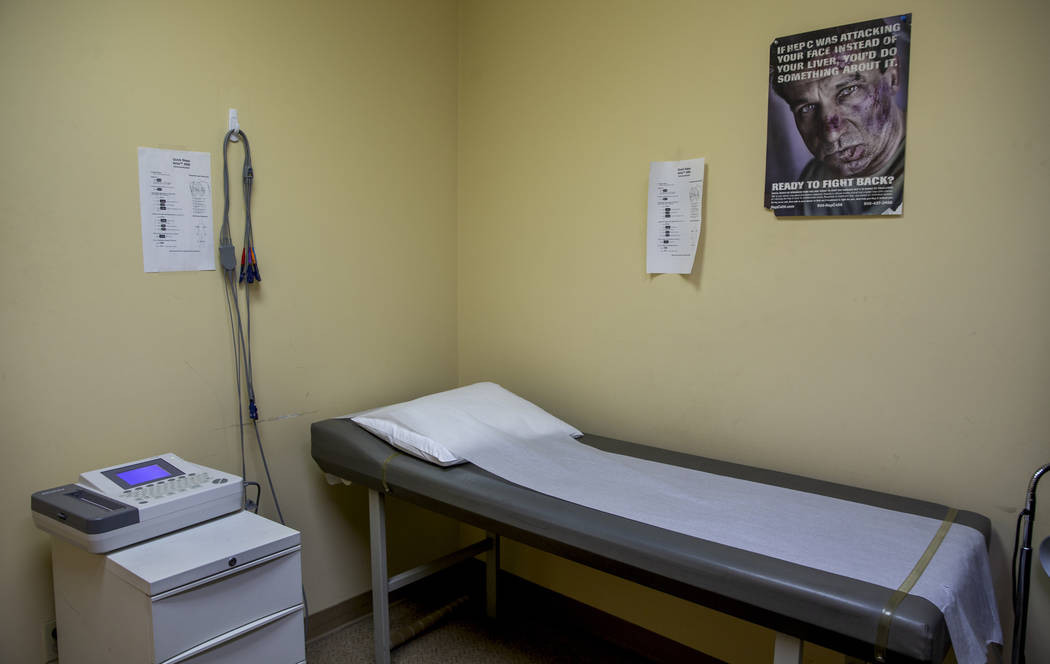 One of the exam rooms at the Adelson Clinic for Drug Abuse Treatment & Research, on Tuesday, Feb. 11, 2020, in Las Vegas. (L.E. Baskow/Las Vegas Review-Journal) @Left_Eye_Images 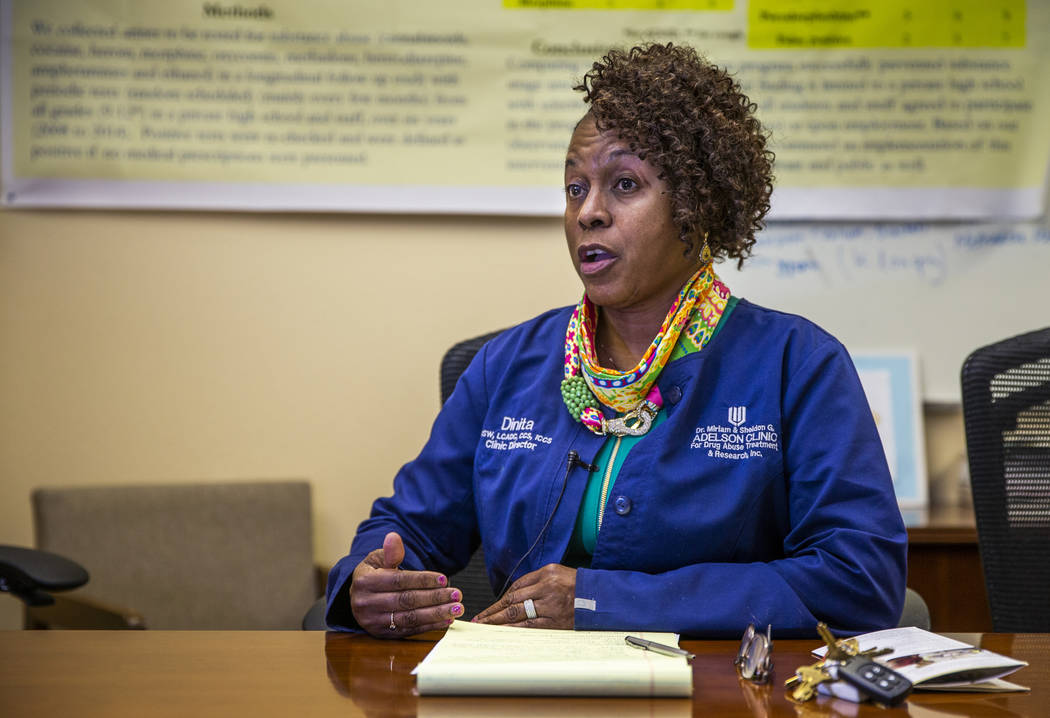 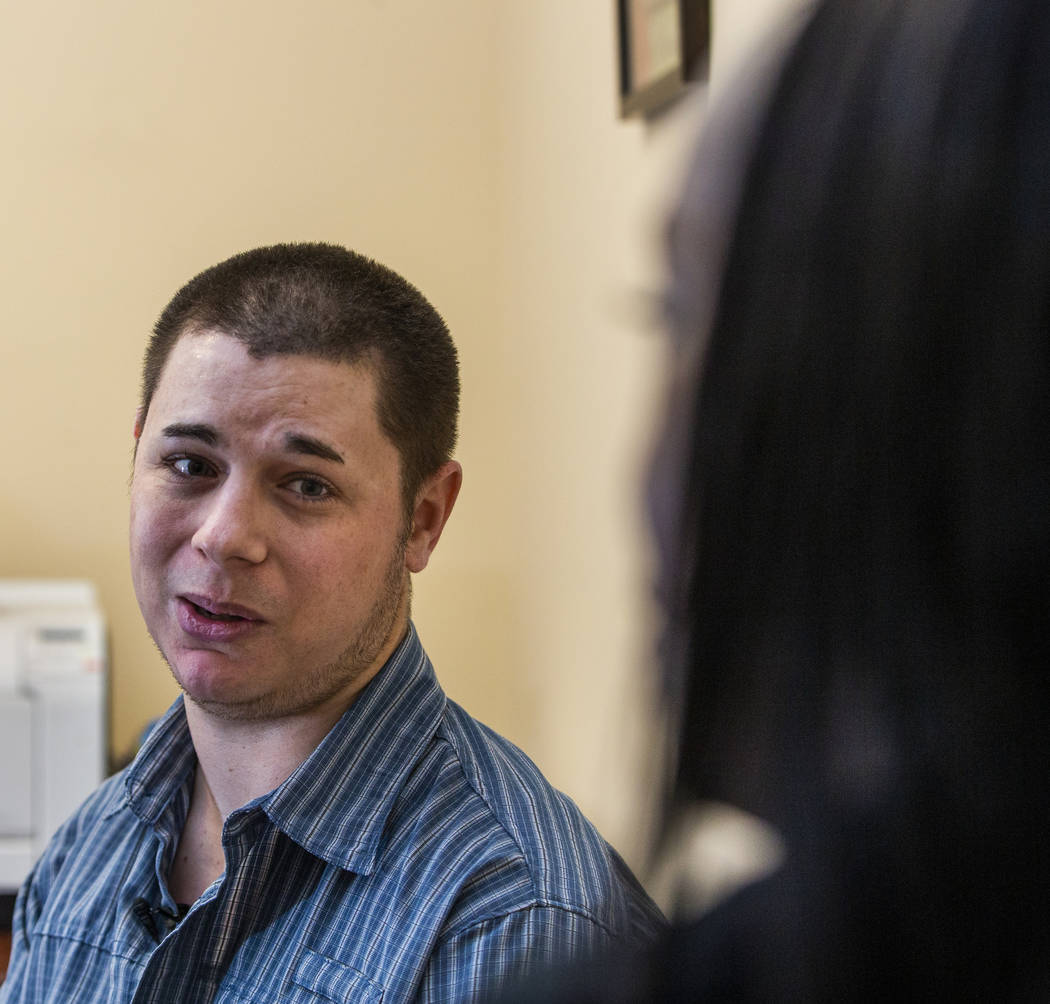 Joshua Domsky talks with counselor Kairo Henderson about the progress he has made as a patient at the Adelson Clinic for Drug Abuse Treatment & Research, on Tuesday, Feb. 11, 2020, in Las Vegas. (L.E. Baskow/Las Vegas Review-Journal) @Left_Eye_Images 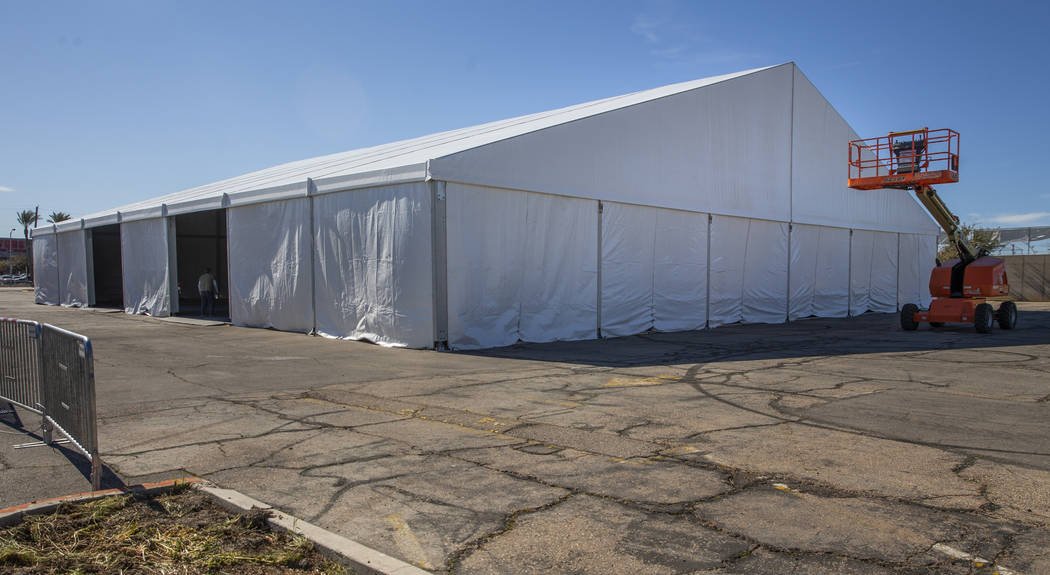 A tent erected in the parking lot at the Adelson Clinic for Drug Abuse Treatment & Research will soon be the location of a celebration of the clinic's 20th anniversary, on Tuesday, Feb. 11, 2020, in Las Vegas. (L.E. Baskow/Las Vegas Review-Journal) @Left_Eye_Images 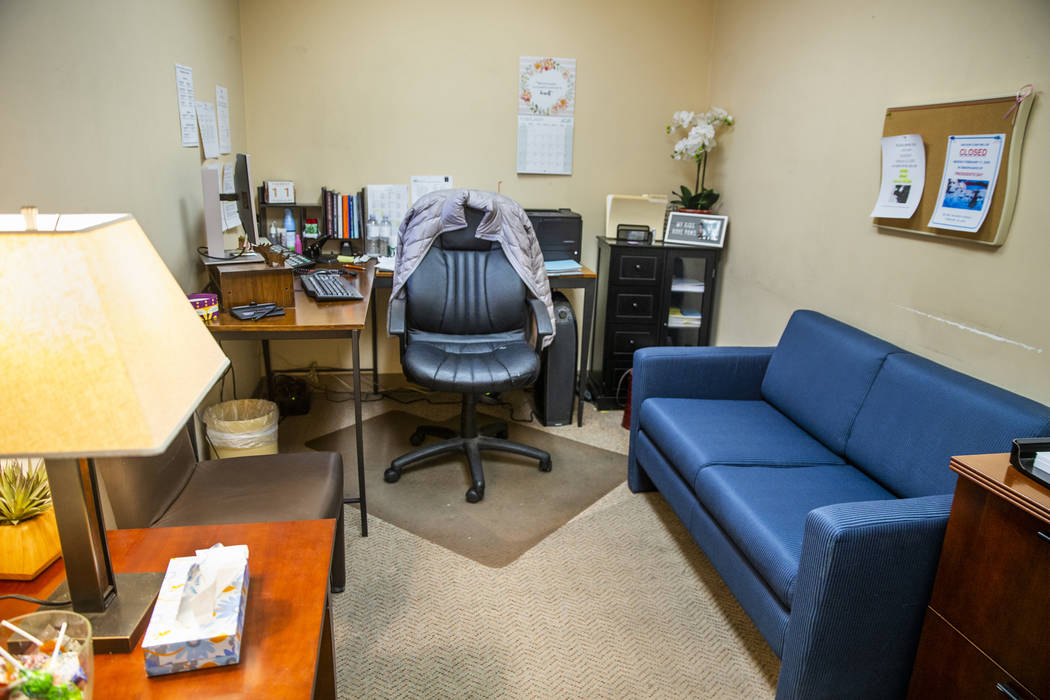 One of the counseling rooms at the Adelson Clinic for Drug Abuse, which this week celebrates its 20th anniversary, on Tuesday, Feb. 11, 2020, in Las Vegas. (L.E. Baskow/Las Vegas Review-Journal) @Left_Eye_Images

Many times Crystal Clamenza had noticed the sign that said “drug abuse treatment” on her way to the park where she and her partner would sleep.

They were addicts, first hooked on her partner’s painkillers prescribed for a back injury, and then, when the prescriptions dried up, on heroin. Little by little, they sold the car, home and possessions her partner had inherited from his parents, all to buy drugs.

Then one morning, when there was no money left, she walked into the Adelson Clinic for Drug Abuse Treatment & Research on Maryland Parkway, looking for a methadone fix so she wouldn’t feel sick.

Dinita Smith, the clinic’s director, remembers that morning, how Clamenza showed up unkempt and hungry, with only a can of ravioli to eat.

Clamenza was also pregnant. Despite having no way to pay for services, the clinic, which usually charges a sliding fee, got her into treatment that day, Smith said.

Fast forward 20 months. Clamenza, who halted her heroin use after her first week in treatment, is scheduled to speak at a luncheon Friday to celebrate the clinic’s 20th anniversary.

“They saved our lives,” Clamenza said of the clinic and its staff in an interview this week.

“Wanting to help the community where she resides, (Dr. Adelson) founded, sponsors and manages two major drug abuse treatment and research centers, one in Las Vegas and one in Tel Aviv,” the clinic’s website states.

The Las Vegas clinic, which offers services to both adults and teens, is currently treating 271 patients and has treated 1,800 over its 20 years of operation, Smith said.

The clinic treats addiction to opioids such as painkillers and heroin by providing medications such as methadone and, on a more limited basis, buprenorphine for what is described as “maintenance treatment.” Patients at first typically come in six days a week to get their doses, which they take orally.

Methadone, the primary drug used to treat opioid-use disorder, is a synthetic opioid that eliminates withdrawal symptoms and relieves drug cravings by acting on opioid receptors in the brain — the same receptors that other opioids such as heroin, morphine and opioid pain medications activate, according to the National Institute on Drug Abuse.

“Although it occupies and activates these opioid receptors, it does so more slowly than other opioids and, in an opioid-dependent person, treatment doses do not produce euphoria,” according to the federal research institute.

“Patients undergoing maintenance treatment do not experience the physiological or behavioral abnormalities from rapid fluctuations in drug levels associated with heroin use. “

In addition to medication, the clinic also provides individual and group counseling.

“She guides me in the right direction,” he said. “She’s always on my case about doing good. And it’s good support to have. So with the counseling, the medication and me really wanting to be clean, all those things together made it happen.

“And know that you really do need help,” continued Domsky, 35, who became addicted to oxycodone after a motorcyle accident at age 15. “You can’t do it on your own. I’d say it’s close to impossible. I’ve tried over and over and over, and I could never do it.”

Clamenza said she didn’t know what to expect when she and her partner first walked through the clinic’s doors in June 2018.

“I didn’t have any money,” said Clamenza, now 36. “We didn’t know what to do. … So we were just planning on coming in here and maybe see if we can get some methadone so that we wouldn’t be sick. And we ended up staying here.

“We showered here, they gave us food, blankets, clothes,” she said.

“It’s important to treat everyone with dignity and respect,” Smith said. It is her belief and Dr. Adelson’s, she said, that “anyone that walks through this door is definitely interested in getting better. Sometimes they just don’t know how.”

Clamenza said she was motivated to get better by fear that her baby would be taken away.

“I knew that I could take methadone and be pregnant and still keep my baby,” said Clamenza, who already had lost one baby to child protective services. “I just had to get some — some control — back in my life.”

Just as she’d lost everything, little by little she began to get her life back.

“They helped us fight for a place to live,” she said of the clinic staff. “They weren’t gonna just let us be on the street.”

The couple stopped living on the streets within two months of beginning treatment, and, now, with help from their family, they’re living in their own condo.

“We have relationships with our families that we’ve never had before,” Clamenza said.

She has married her baby’s father, who also is being successfully treated and has a new job.

Clamenza focuses now on taking care of their daughter, who is 18 months old.

After months of sobriety, Clamenza is allowed to take medication home in a lockbox and come to the clinic three days a week instead of six.

Some patients eventually will taper off methadone. But Smith said ending its use is not the measure of success.

“Success,” she said, “is when you see behavior changes.”

The Review-Journal is owned by the family of Dr. Miriam and Sheldon G. Adelson, founders of the Adelson Clinic for Drug Abuse Treatment & Research.