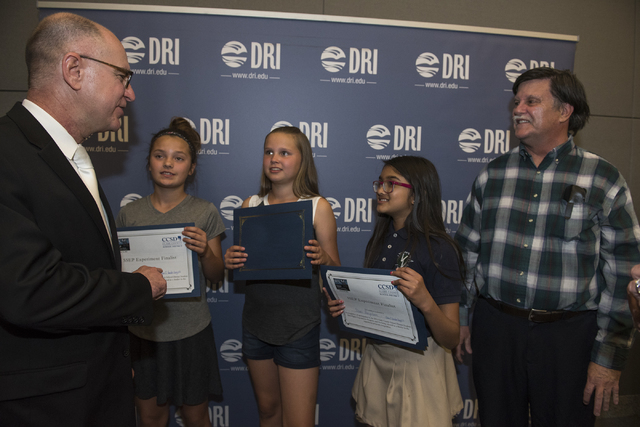 Director of the International Space Station Sam Scimemi, left, greets Vanderburg Elementary fifth-graders Avery Sanford, 11; Kendall Allgower, 11, and Shani Abeyakoon, 10, and their Gifted and Talented Education teacher William Gilluly during the May Science Be With You event May 4, 2016, at the National Atomic Testing Museum. Vanderburg is one of three Clark County schools to be chosen to have its proposals submitted for the 2016 Student Spaceflight Experiments Program. Martin S. Fuentes/View 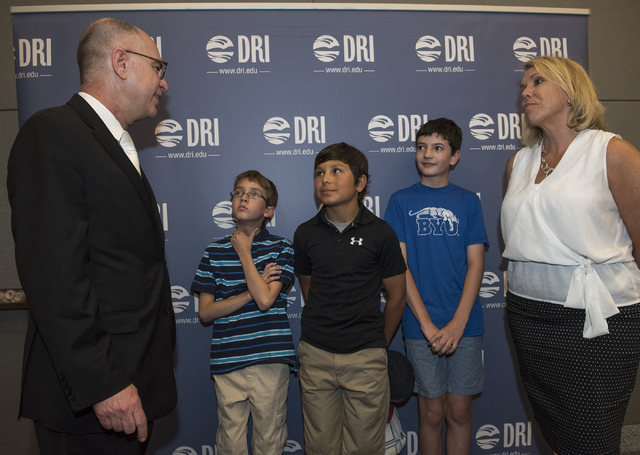 Director of the International Space Station Sam Scimemi, left, greets Batterman Elementary fifth-graders Tyler Hockersmith, 11; Kaiden Hernandez, 10; Levi Landers, 11, and their Gifted and Talented Education teacher Debbie Smith during the May Science Be With You event May 4, 2016, at the National Atomic Testing Museum. Batterman is one of three Clark County schools to be chosen to have its proposals submitted for the 2016 Student Spaceflight Experiments Program. Martin S. Fuentes/View 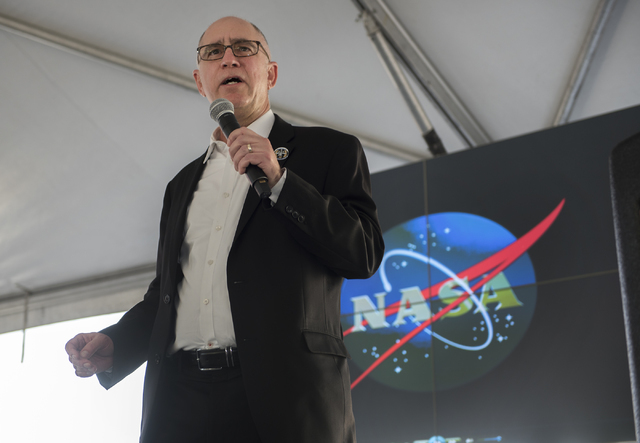 Director of the International Space Station Sam Scimemi speaks to the crowd during a May Science Be With You event May 4, 2016, at the National Atomic Testing Museum at the Desert Research Institute in Las Vegas. Martin S. Fuentes/View 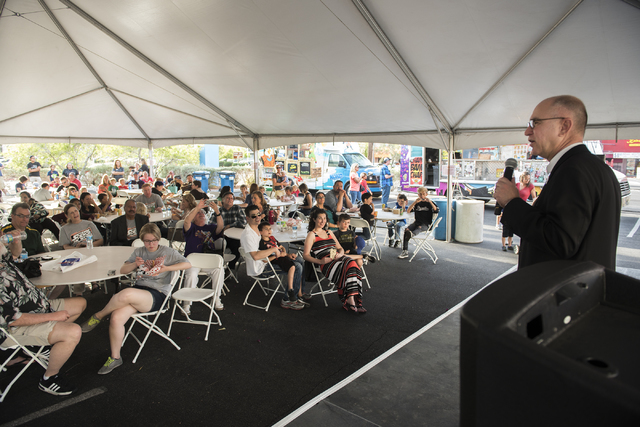 Director of the International Space Station Sam Scimemi, right, speaks to the crowd during the May Science Be With You event May 4, 2016, at the National Atomic Testing Museum. Martin S. Fuentes/View 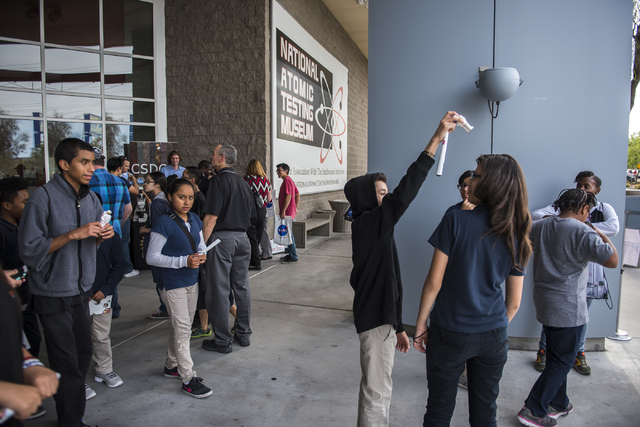 Attendees are seen at the May Science Be With You event May 4, 2016, at the National Atomic Testing Museum in Las Vegas. Martin S. Fuentes/View

Many students dream about growing up and becoming an astronaut or at least aspiring to work with astronauts. While many students are light years away from being scientists for NASA, a few Clark County students recently moved one step closer to working with the International Space Station.

For the last few months, students within the Clark County School District were developing proposals for space-related projects to be submitted to the Student Spaceflight Experiments Program, sponsored by the National Center for Earth and Space Science Education.

Students from Batterman, Vanderburg and Wright elementary schools recently received word they were finalists for the program, which was announced at a May 4 Desert Research Institute event, May Science Be With You.

If chosen from a pool of national applicants, the students’ experiments will be conducted at the International Space Station.

The project started when a local teacher discovered the program, which gives students across the nation a chance to come up with ideas.

William Gilluly, a specialist for the Gifted and Talented Education program at Vanderburg Elementary School, 2040 Desert Shadow Trail, brought this idea to his principal.

“I had never seen anything like it,” he said. “We tend to focus on STEM (science, technology, engineering and mathematics) education, but this is honest-to-god application.”

Wagner said Gilluly went on to write the proposal to the national organization to get Clark County involved with the process. He then assisted the other six schools.

Nationally, the program invites fifth- to 12th-graders to submit proposals. For its inaugural year, the district went with just fifth-graders.

Along with Vanderburg, students from the GATE programs at Batterman, King, Mack, Snyder and Wright elementary schools and Sandy Searles Miller Academy for International Studies were tasked with creating proposals on various space-related topics.

“This was possible because of people in the community,” Wagner said.

The district reached out to the Desert Research Institute and UNLV to cultivate support needed to give students adequate advice on their proposals.

A team composed of local scientists and educators evaluated the students’ proposals to determine which ones will be submitted to the national competition. They whittled 33 submissions to three.

Beyond the competition, Wagner said the project aligned with the Next Generation Science Standards, part of the Nevada Academic Content Standards in science.

At the May 4 event, which was part of the 2016 Las Vegas Science & Technology Festival, three teams were told their proposals will move on to the next round.

“The timing worked out to have the announcement coincide with the Desert Research Institute event,” Wagner said.

Winning students also got to meet with U.S. Sen. Harry Reid and Sam Scimemi, director of the International Space Station.

“When I was your age, I never had anything like this,” Scimemi told the students.

Even if the students weren’t selected, the district and the committee of scientists will talk with them about ways they could improve their proposals. The finalists expect to hear back this summer if their proposals were accepted.

Wagner said the district is already looking into next year’s program.

“We would love to do it again,” Wagner said. “This is a great learning experience for our students.”