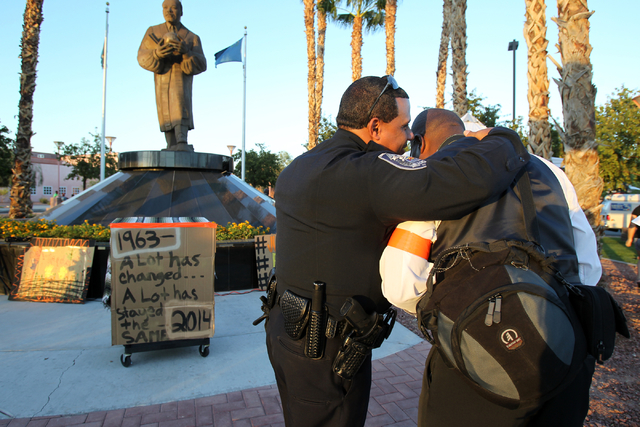 The killing of Michael Brown happened hundreds of miles from the Las Vegas Valley, but the outcome of a dead young black man at the hands of police echoes the concerns of many residents in North Las Vegas and the surrounding area.

“I traveled to Missouri to attend Michael Brown’s funeral,” said U.S. Rep. Steven Horsford. “The community was devastated and left with so many unanswered questions on how this could’ve happened. It’s our responsibility to have this collective dialogue on what needs to change and improve. There needs to be greater accountability and oversight with officers that aren’t following proper protocol.”

The discussion, organized by 24 groups and led by Rachel Anderson, professor of law at the UNLV William S. Boyd School of Law and president of the LVNBA, began with personal accounts of racial discrimination.

The dialogue focused on statistics related to racial profiling, racially disparate stops, arrests and use of force.

Chris Funches, a UNLV student, talked about the humiliation he feels when police constantly stop him after working a late-night shift.

“I’ve gotten talked down to, threatened and even unlawfully pulled over,” Funches said. “Should a young African American male get used to fitting the descriptions and going through the motions just because of the stereotypes that plague our demographic?”

In January 2012, the Metropolitan Police Department agreed to take part in an initiative sponsored by the U.S. Department of Justice, Office of Community Oriented Policing Services, known as the Collaborative Reform Model.

As part of this initiative, Metro agreed to an in-depth assessment of its use of deadly force policies and practices.

“We realize that a lot of black and Hispanic men are being killed,” said Metro Capt. William Scott. “Officers are not trained to shoot to wound anybody. We’re trained to stop the threat.”

Scott said there has to be reasonable suspicion before stopping an individual.

Regardless of the situation, Kelley Jones, deputy public defender at the Clark County Public Defender’s Office, advised people to be polite to police officers and ask why they are being pulled over.

“Your job is not to get respect out there at that time,” Scott said. “Your job is to make sure you come home at night to your father and mother, and you let the parents deal with those issues if you feel you were disrespected.”

She said police officers must have a search warrant if they want to search someone’s car and no arrest has been made.

In addition, individuals must remember their Miranda Rights to remain silent and have an attorney present.

Scott Morris, president of the Black Law Students Association, ended the dialogue with the acronym SEARCH. He urged people to have self-control, ease the tension, hold accountability, respect authority, comply with the command and help themselves legally if needed.

“Minority youth have to be very careful on how they’re perceived,” Morris said. “The wrong color, the wrong look can disproportionately be perceived as you being in the wrong gang or just up to no good. While it might not be fair, that’s the reality of the situation.” 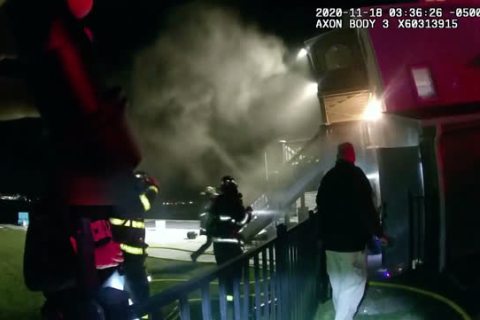 Report: Tony Hsieh may have been impaired at time of deadly fire
By Blake Apgar / RJ

More than two months after a house fire killed tech entrepreneur Tony Hsieh, a Connecticut fire department has released a report on its investigation.