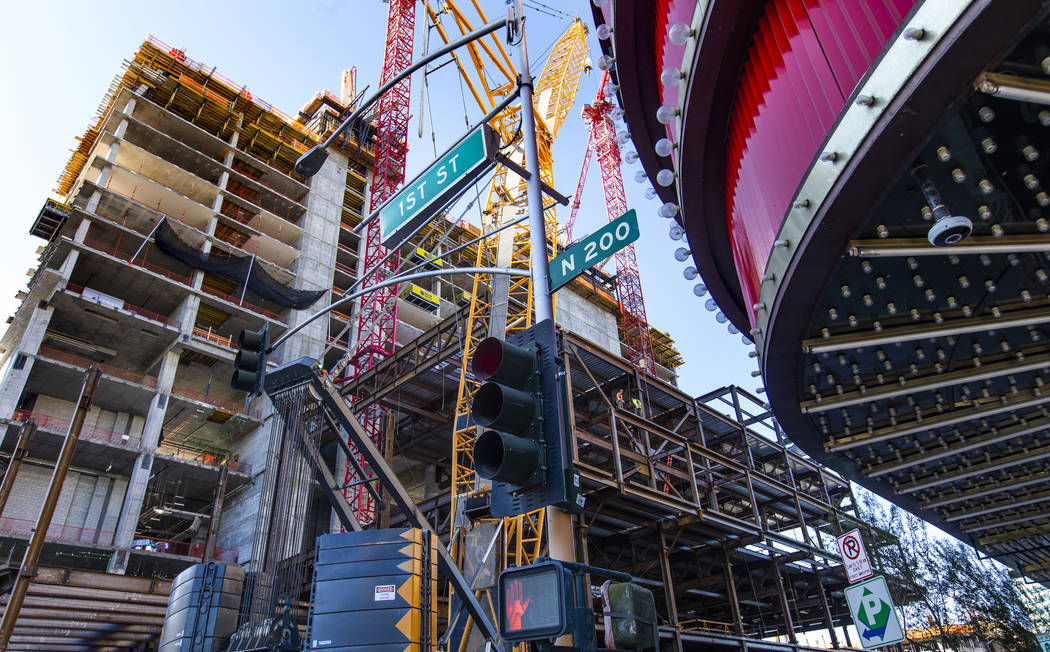 The exterior is taking shape during a construction tour of the Circa on Monday, Dec. 9, 2019, in Las Vegas. (L.E. Baskow/Las Vegas Review-Journal) @Left_Eye_Images 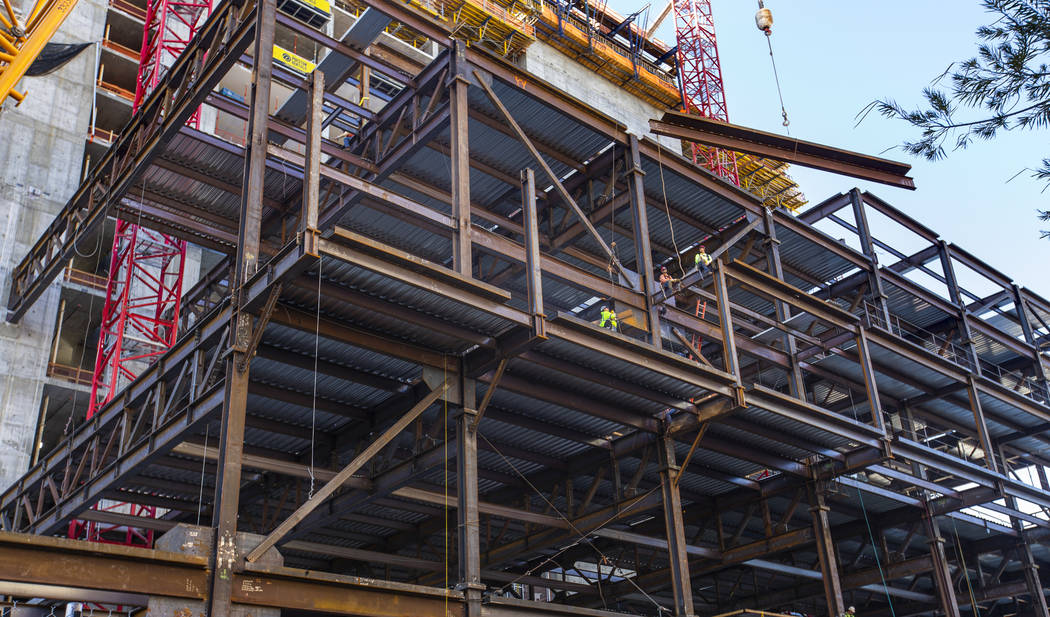 Workers ready to secure another beam being brought up during a construction tour of the Circa on Monday, Dec. 9, 2019, in Las Vegas. (L.E. Baskow/Las Vegas Review-Journal) @Left_Eye_Images

Things are looking brighter for downtown Las Vegas, and it has nothing to do with the Fremont Street Experience enhancements that will debut New Year’s Eve.

By gaming win numbers, occupancy rates and average daily room rates, downtown Las Vegas has been on a roll for the better part of five years and shows no sign of letting up. Derek Stevens’ Circa, due to open at the end of 2020, is set to be the first new from-the-ground-up downtown resort project since 1980. And by summer, downtown is also expected to have a 315,000-square-foot convention center at the World Market Center and an expanded Downtown Grand.

“I don’t want to create an overly unrealistic expectation for downtown, but we’ve seen for the past five years this increase in activity downtown, and now we’re seeing reinvestment there,” said Jeremy Aguero, principal for Las Vegas-based Applied Analysis.

In 2019 alone, downtown hotel occupancy is up 1.1 percentage points from last year to 85 percent, average daily room rates are up 1.7 percent to $71.89, and gaming win has soared 6.4 percent to $569.6 million, according to the Las Vegas Convention and Visitors Authority and the state Gaming Control Board.

By comparison, Las Vegas Strip occupancy is up 0.6 points, and gaming win is down 0.2 percent, but the average daily room rate on the Strip is up 3.6 percent.

Since the closure of an exhibition hall at nearby Cashman Center more than a year ago, downtown convention space was limited to some temporary tent structures adjacent to World Market Center and a few ballrooms at some properties.

The Expo at World Market Center will feature divisible space for a variety of events with modern amenities and on-site food service.

“I just think that this is going to be a way for downtown to come into its own in ways that people haven’t seen before,” said Claytee White, director of the Oral History Research Center at UNLV Libraries.

Just as business leaders go to the —which is technically in Clark County as opposed to Las Vegas — to get on the global stage, now they can do so in downtown as well, she said.

“Now we will have it in the city of Las Vegas as well as in Clark County,” she said.

Bob Maricich, president and CEO of International Market Centers, said he has pinpointed the source of his company’s success downtown.

“We’re working really well together with city government,” he said. “Without the support of the mayor and the (City) Council, this never would have happened,” Maricich said at a recent topping-off ceremony for the Expo, which is expected to open June 22.

“It’s hard to make them (convention centers) pencil out, but the city helped finance the project, and we agreed the building needed to be available for downtown conventions.”

Former Las Vegas Councilman Bob Coffin, who represented the area from 2011 until this year, said Expo is a smaller scale than the Las Vegas Convention Center, “but it’s more flexible.”

With convention space soon to be available, demand for hotel rooms should climb.

That’s where Circa will come in, with 512 rooms and suites coming online when the doors open. And the Downtown Grand will have a new hotel tower with 495 rooms.

Stevens’ promise of more attractions will start with his planned three-story sportsbook — “the largest in the world,” he said — and a rooftop six-pool deck that will serve as an outdoor amphitheater for watching sports on a 134-by-41-foot screen.

“We’re living in a really special time in Las Vegas,” Stevens said while leading a recent tour of Circa, which ultimately will have 777 rooms. “I think there’s so much pent-up demand for new product in Las Vegas, it’s pretty exciting to be here with what’s going on at Symphony Park, Fremont East, and then you have projects like the (expansion of the Las Vegas) Convention Center, Resorts World and Allegiant Stadium and Circa coming in.

“I think there’s so much new product that it gets people excited,” he said.

Patrick Hughes, president and CEO of the Fremont Street Experience, is promising to dazzle people with the 1,500-foot overhead screen that stretches along three blocks.

In a recent appearance before the LVCVA board of directors, Hughes said a $32 million improvement to the Viva Vision light show will be amped up with 12.5 million LED lamps to make the screen seven times brighter, with 550,000 watts of concert-quality sound.

White said 2020 is poised to be a big year for downtown.

“With the conventions piece, as well as Circa — and we now have that whole Smith Center area — it’s just amazing. And it’s going to be part of the competitive edge that Las Vegas presents to the world,” she said.

Stevens is counting on new attractions to produce record visitation for Las Vegas.

“Next year, we ought to set a record for visitation, he said. “I think with all these new projects opening in 2020 and 2021, it’s really going to set Vegas up for a good future for 2022 and beyond.”

Aguero said he is convinced that the attractions of downtown Las Vegas will draw visitors and the compact nature of downtown appeals to both tourists and local residents.

“I don’t think there’s any doubt that the fact that it’s all within close confines kind of helps it, but visitor volume is rising again,” Aguero said. “When you have 42 million people to Las Vegas, they’re coming to Las Vegas for many different reasons. Some of those are seeking value. Some are seeking entertainment. Some of them are seeking higher-end experiences. Downtown Las Vegas is providing wonderful experiences for people who are coming down. It’s really become something you don’t want to miss, something you want to see. You want to have that kind of experience.”

That goes for locals as well.

“The downtown region has continued to remain very attractive to locals.” Aguero said. “It’s not one thing. I think it’s many things that are occurring that have made it increasingly successful.”