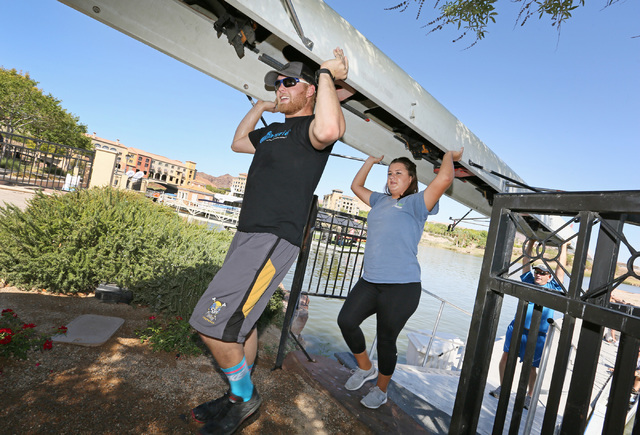 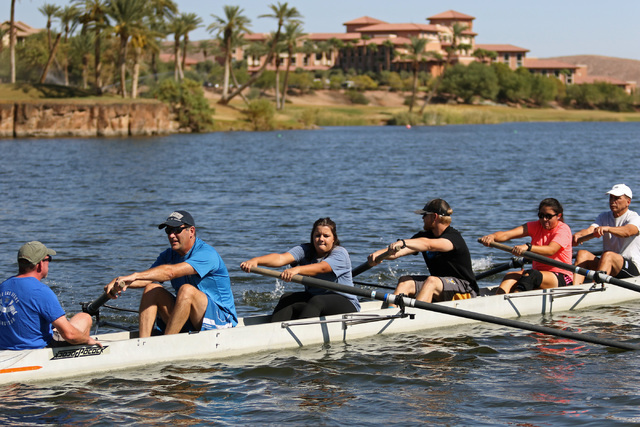 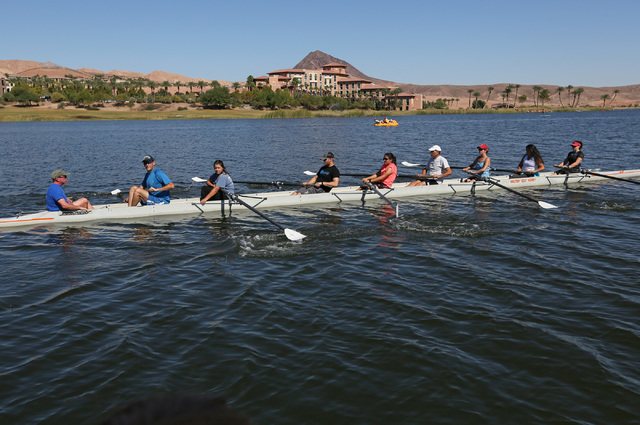 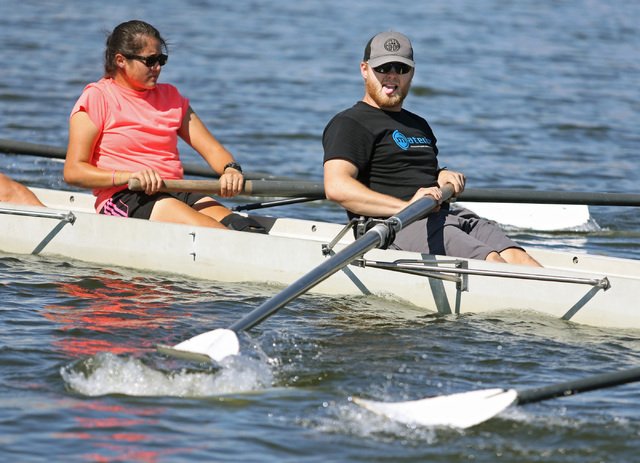 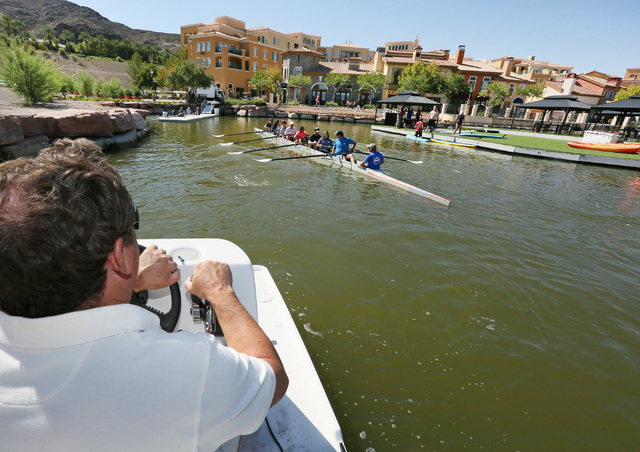 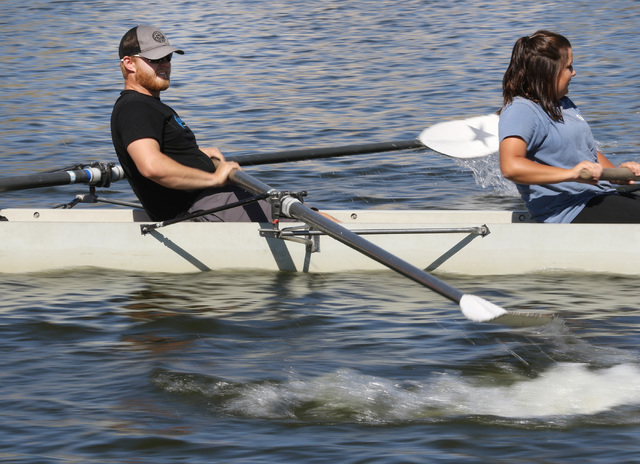 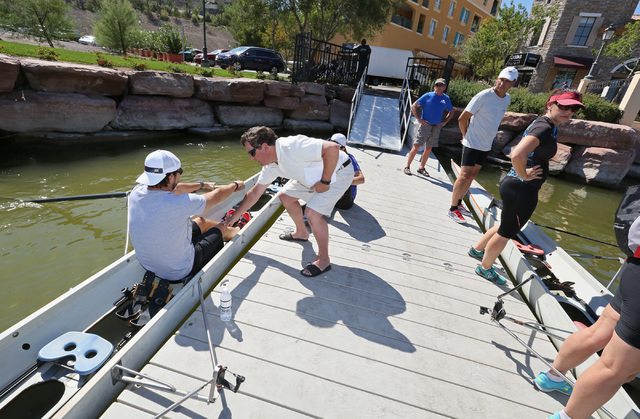 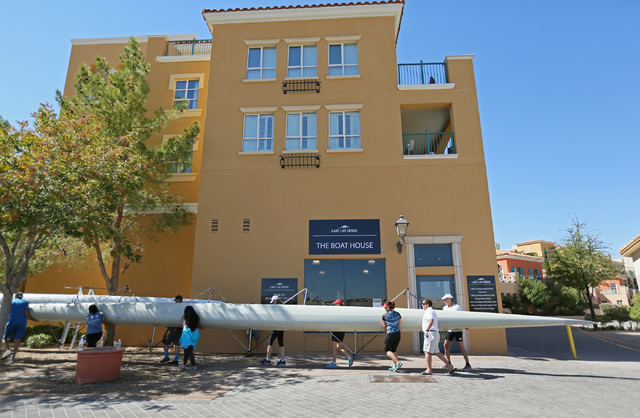 Jim Andersen, second from right, and crew members carry the boat back to the boathouse after rowing at Lake Las Vegas Sept. 17. Ronda Churchill/View

In the middle of Lake Las Vegas, Jim Andersen pulls his motorized boat up to a group and begins giving instructions: “Long, steady strokes,” he says. “Much better folks. Much better.”

Though the group is a mixture of ages and backgrounds, they have all come together with a common desire: To learn how to row.

With the help of the Lake Las Vegas Master Association, Andersen started the Lake Las Vegas Rowing Club to form a competitive team. But his larger goal is to get kids involved in the sport. The club has a Junior Rowers team for ages 13 to 19 and an Adult Novice Co-ed team.

“I’ve been coaching for 35 years,” Andersen said. “This sport opens up incredible opportunity for kids.”

On a recent Saturday morning, one group started off learning a little about rowing technique while on a boat in the dock. Then some of the more advanced participants took the boat out on the lake to continue practicing.

Andersen was beside them the entire time, giving advice and helping fine-tune their techniques.

Though the club started in September, Andersen thinks he can get more people involved. Having coached multiple national championship teams, he said his entire life was impacted by the sport, and he hopes to share his passion with others.

After convincing his mother to send him to a private high school in Canada, Andersen was drafted to become a coxswain — the team member who sits in the stern and is responsible for steering the boat. He went on to compete throughout high school.

Rowing doesn’t just come with athletic opportunity, he said, but also scholarships. It helped him attend the University of California, Berkeley, where he was a coxswain for the college team.

After graduating, it was time for Andersen to forego his stern seat for an opportunity to coach. He instructed students at a variety of schools, including the University of California, Santa Barbara.

Eventually, he became a high school coach. A few years ago, he moved to Oklahoma to bring rowing to the state.

“It started as a very small program,” he said. “There were about 150 kids when I left.”

Learning that Las Vegas didn’t have a team, Andersen considered moving to the area to do the same thing he did in Oklahoma.

“I found (Lake Las Vegas) and fell in love with it,” he said.

He is currently talking to Nevada State College about starting a team there. However, he said he really wants to focus on high school students.

“There is just a lot of potential for them,” he said, adding that he also thinks there are a lot of untapped rowing scholarships, especially for girls.

Though he isn’t new to the sport, it’s been years since Henderson resident and rowing club board member Matt McKnight has had a chance to row.

He also went to school in Berkeley and has competed against Andersen.

“I didn’t have the grades to get in,” he said of the school. “I was able to go because of rowing.”

After college, he started a career and had a family, which he said left no time for the sport. Now that Andersen has created the club, McKnight has had a chance to reconnect.

Beyond reconnecting, McKnight also is excited for Andersen’s vision to make rowing accessible to high schoolers.

“I’m living proof for what this can do,” he added.

“We are trying to set one up for March,” Andersen added.

Andersen said he will never forget the lifelong lessons he learned from rowing.

“You just learn a lot about discipline from doing it,” he said.

Junior Rowers may come to Lake Las Vegas at 4 p.m. Tuesdays to learn how to row while getting two free weeks to try out the competitive program. The club’s Adult Novice Co-ed team meets at 6 p.m. Mondays and is accepting members.