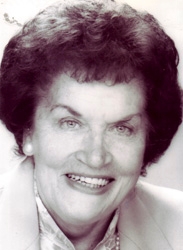 Lorna Kesterson, Henderson’s first and only female mayor, has died at 86.

Kesterson’s life was one of service.

She served on the Henderson City Council starting in 1977 and was elected mayor in 1985, earning a second term four years later.

During that time, she served with Henderson Mayor Andy Hafen, who was a councilman during her two mayoral terms.

"Lorna Kesterson was one of the finest ladies I’ve had the privilege of working with during my career in public service," said Hafen in a statement. "She was a Henderson icon and a pioneer both in politics and in our community."

Hafen said Kesterson was "a community leader, a devoted wife and mother and a good friend. Our hearts and prayers go out to her family. We will all deeply miss her."

Kesterson presided over the City Council when Henderson began its transformation from a small, blue-collar suburb of Las Vegas to Nevada’s second-largest city, earning national acclaim for its master-planned neighborhoods, parks and recreation amenities .

She also served on several boards, including the Las Vegas Convention and Visitors Authority and the Nevada League of Cities.

Before entering politics at the age of 49, Kesterson for three decades was a reporter and later the managing editor of the Henderson Home News.

She earned her degree in journalism from Utah State University after graduating from Boulder City High School.

After college she served a mission for the Church of Jesus Christ of Latter-day Saints before returning to the Las Vegas Valley and starting a family.

She and her late husband, Robert, raised four boys.

She earned accolades throughout her political career.

She is survived by sons Don Kesterson of Henderson and Roger Kesterson of Wyoming; a brother, Donal Jolley of California, and sister, Venus Marriages of Carson City; seven grandchildren and seven great-grandchildren.

"I’ve talked to a lot of people this morning, and they were all quite fond of her," said Bud Cranor, Henderson’s director of communications.

"They thought the world of her."