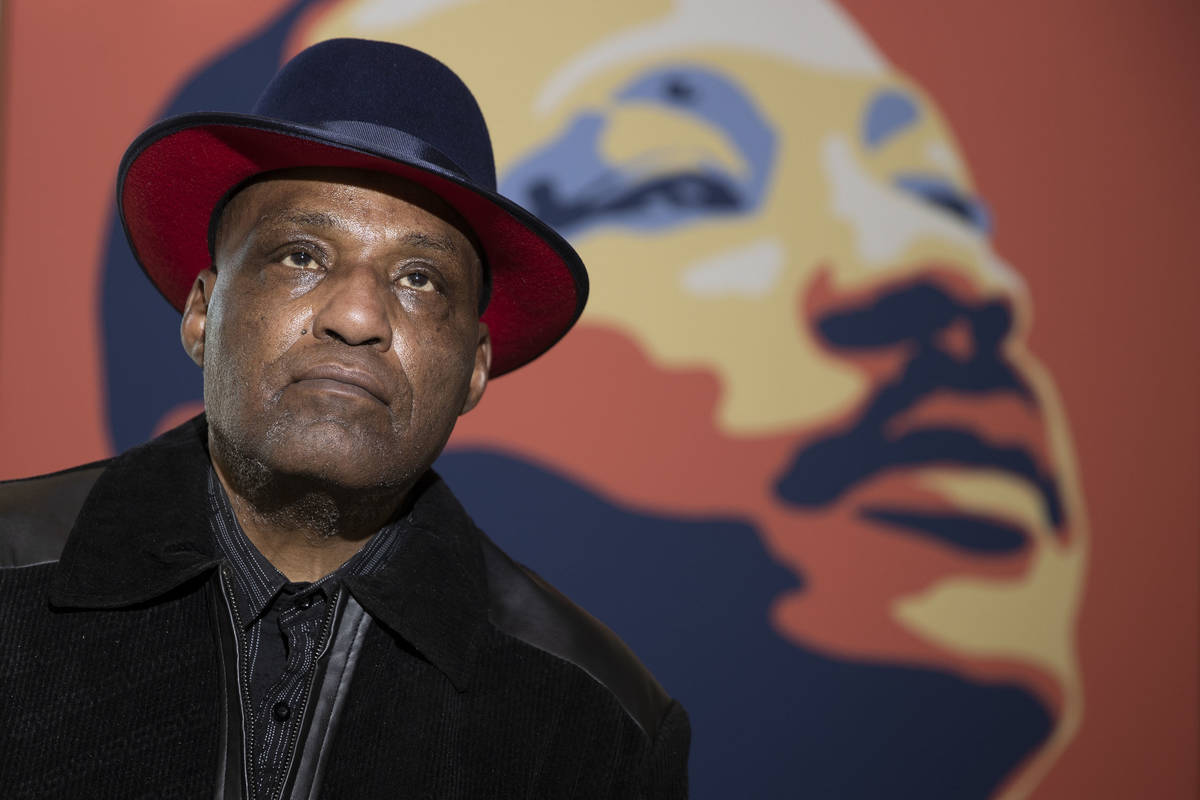 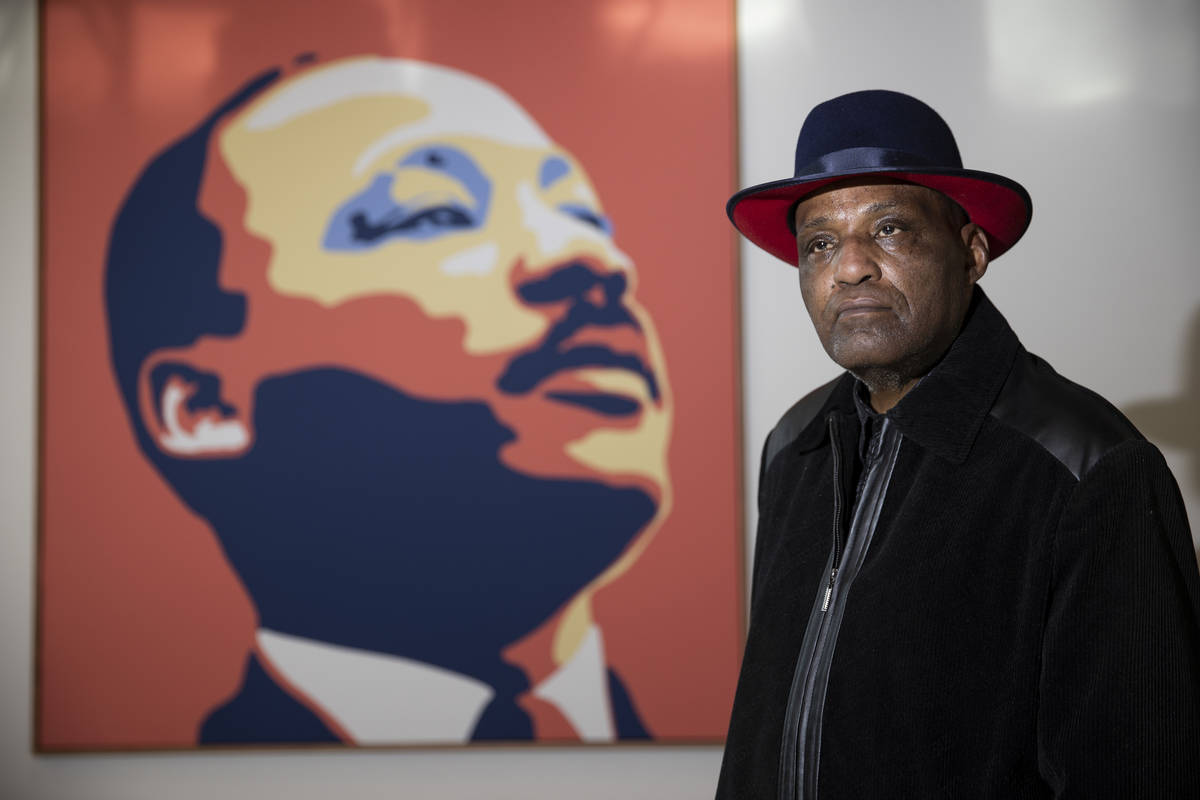 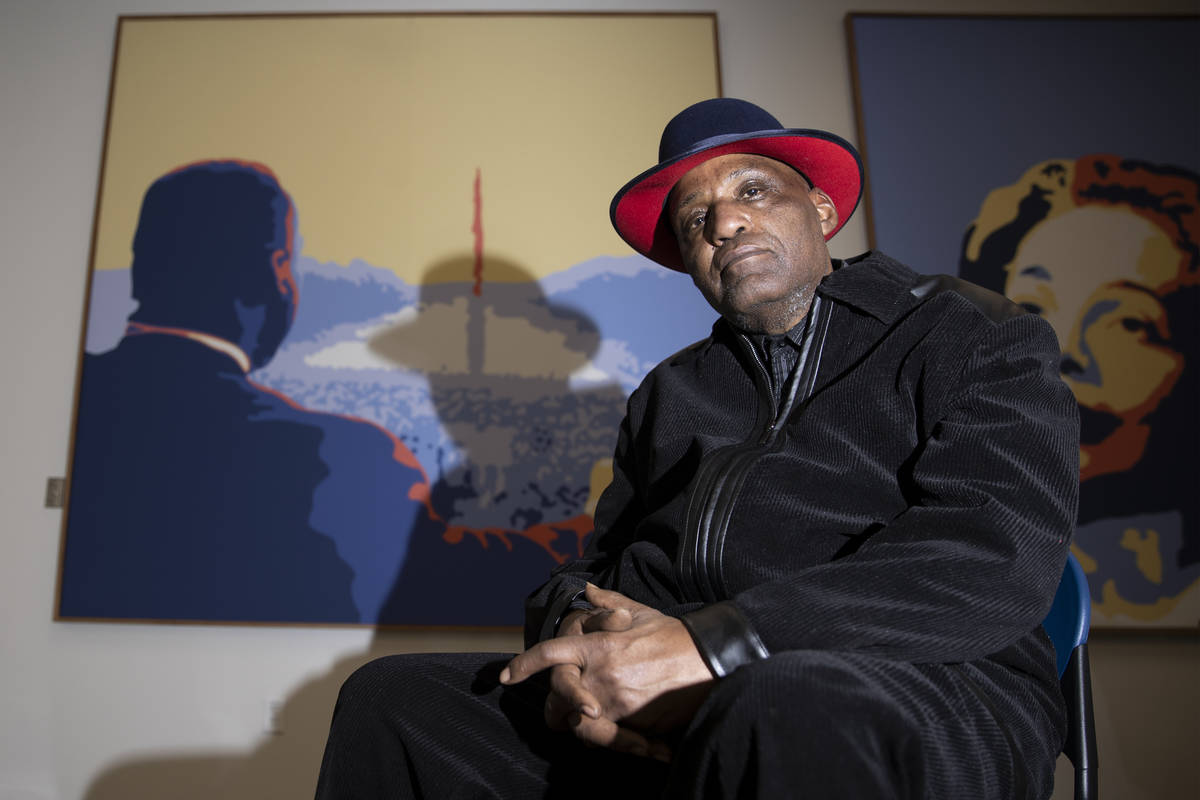 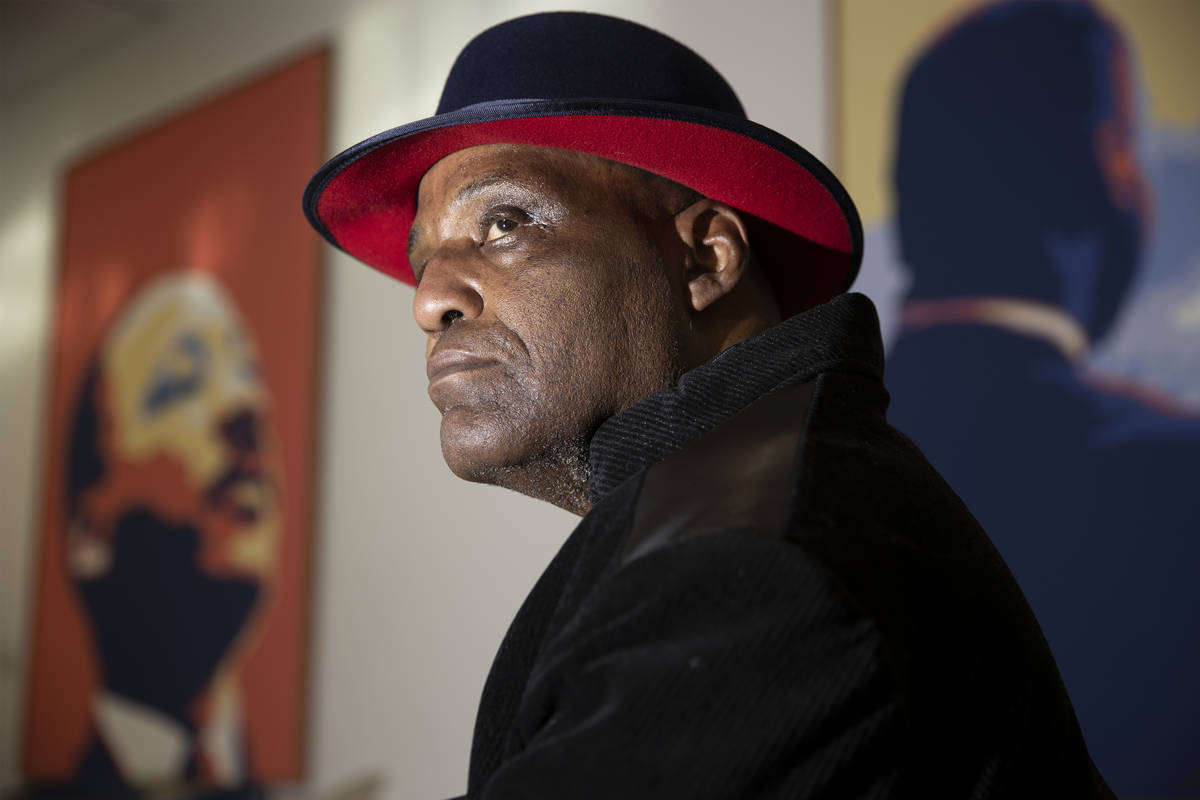 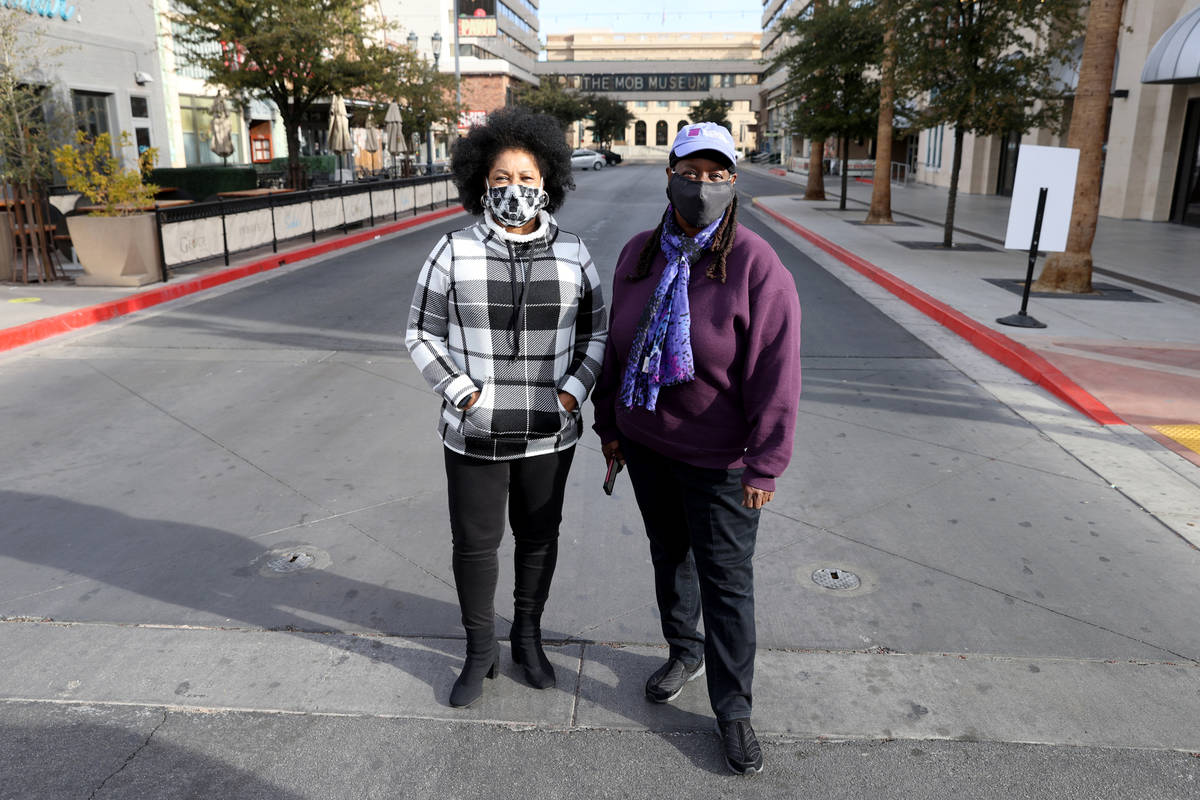 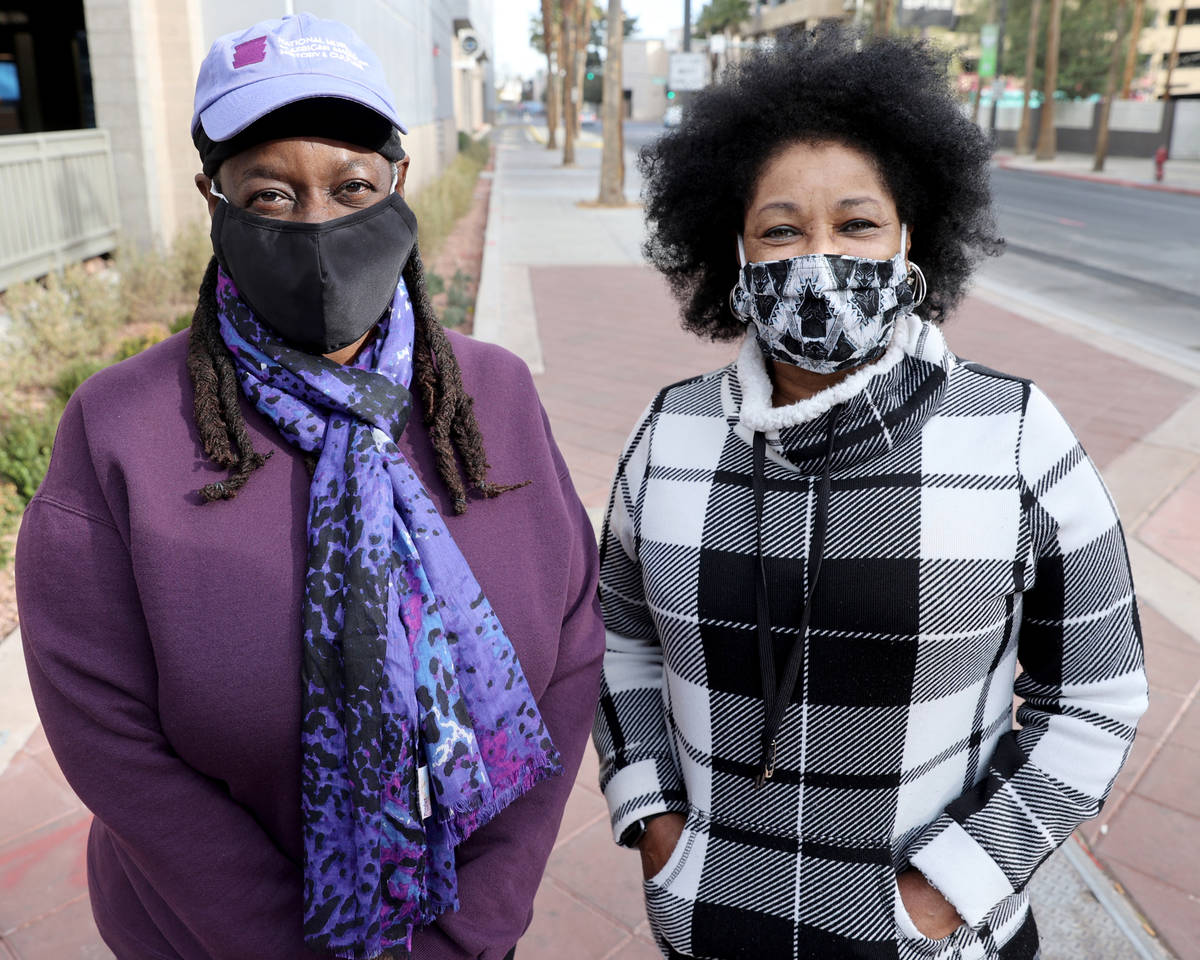 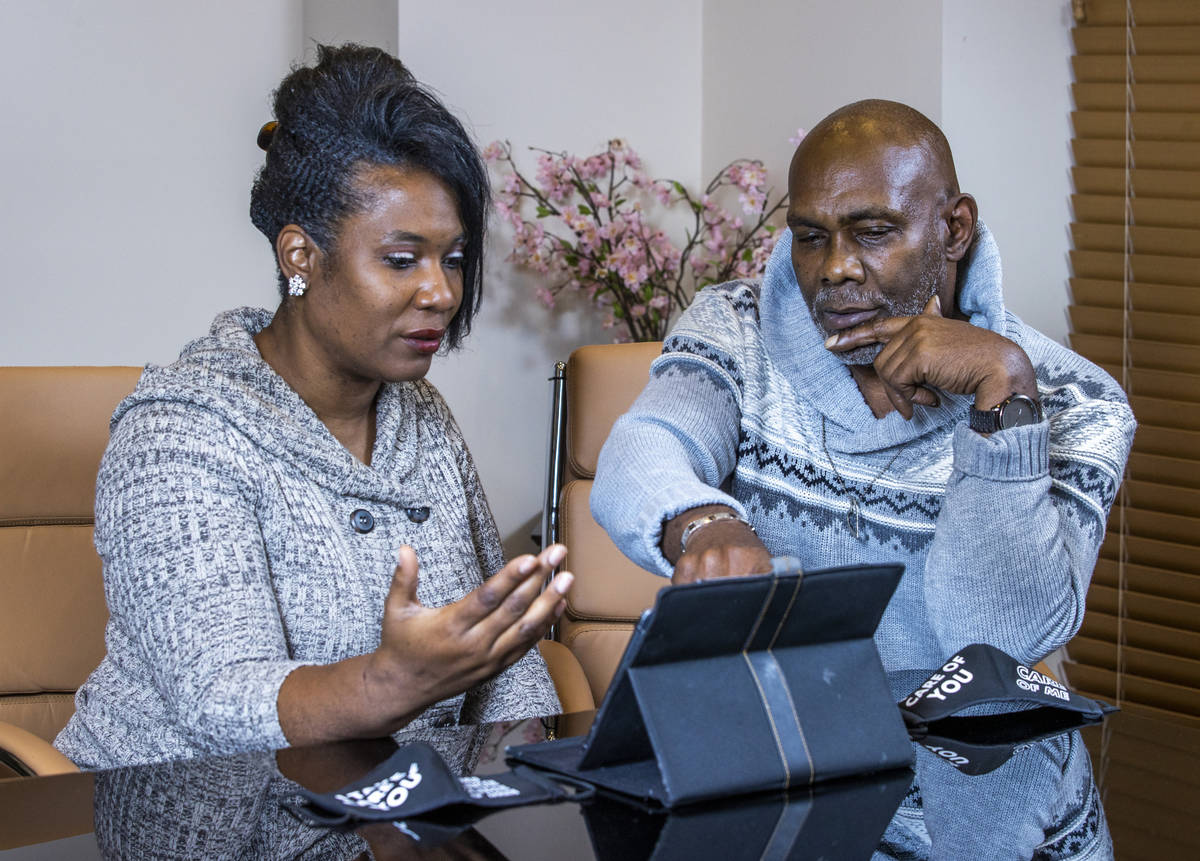 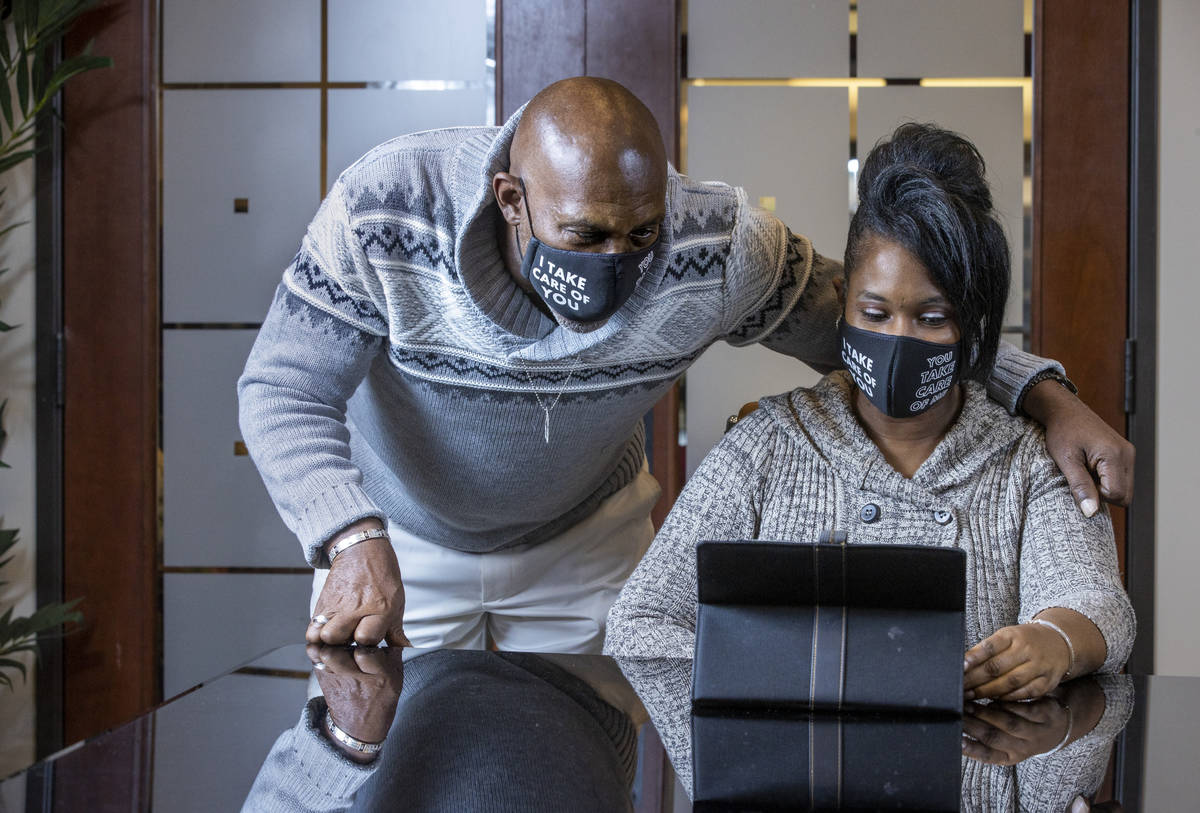 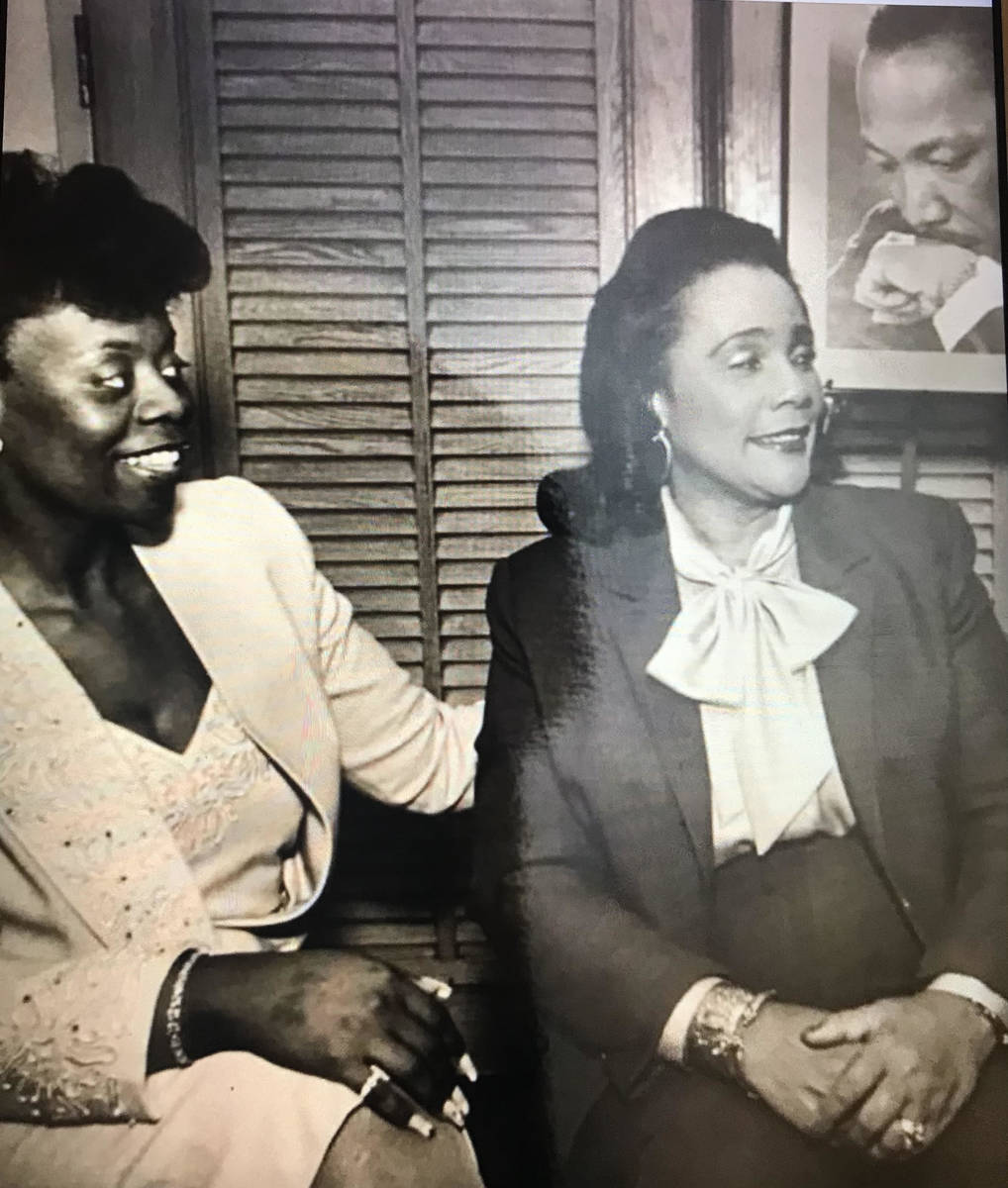 Las Vegan Deloris Sawyer talks with Coretta Scott King in 1987 in Las Vegas. Sawyer was a driving force in both the organization of the parade in Las Vegas as well as related efforts to improve quality of life in Southern Nevada. (Courtesy Deloris Sawyer) 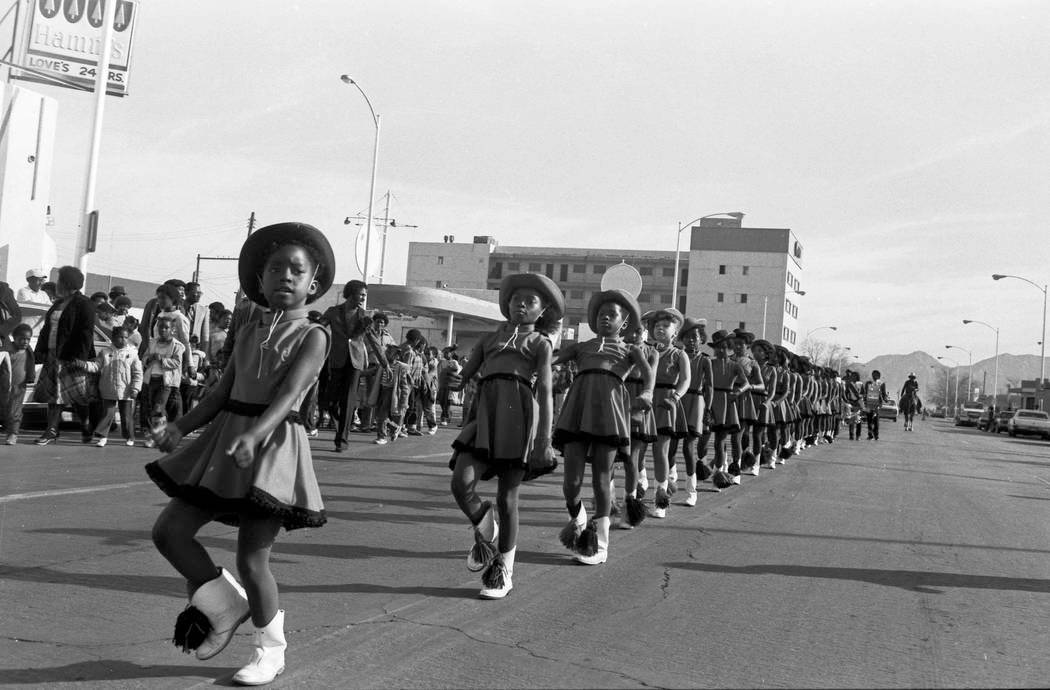 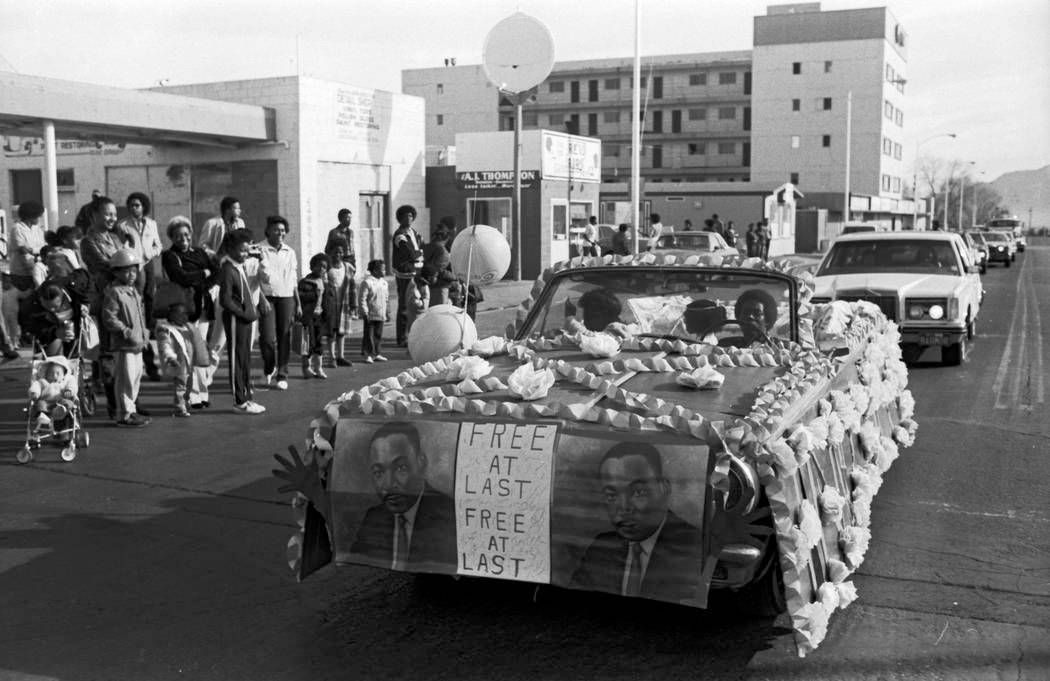 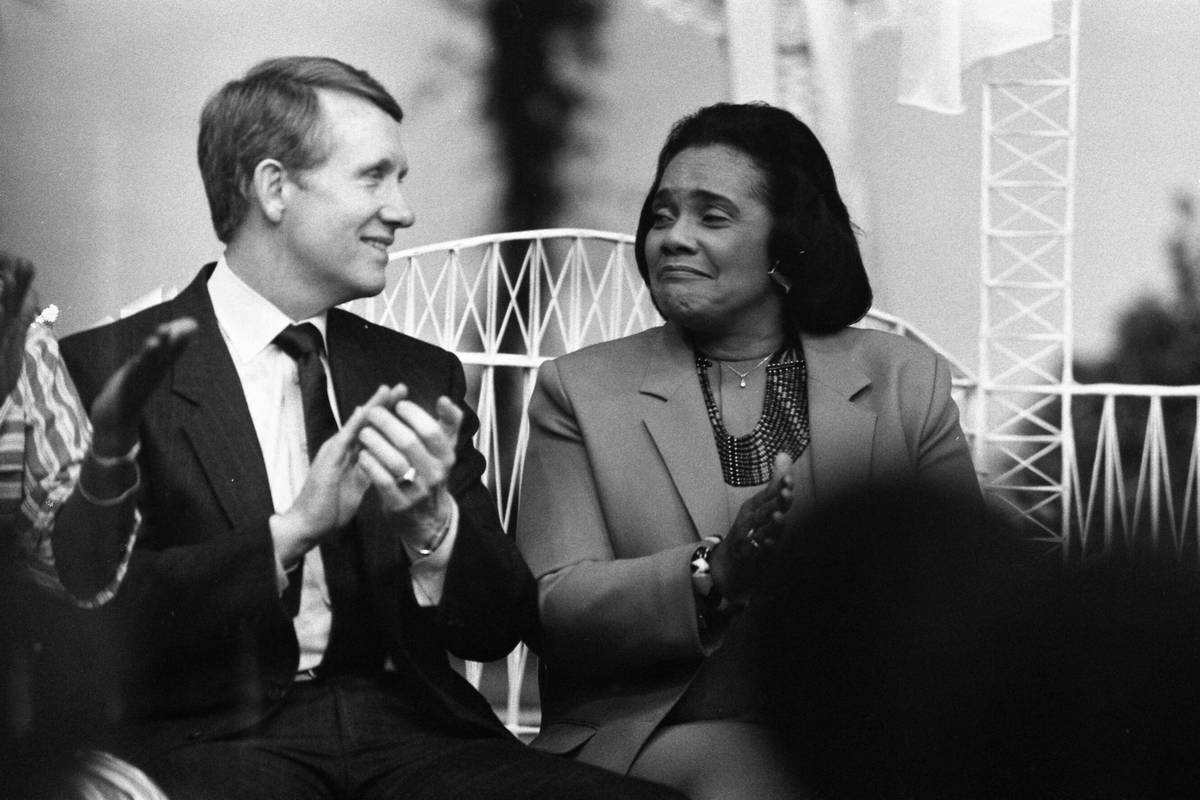 When Wendell Williams moved from Louisiana to Las Vegas in 1977, he noticed that the community had few tributes to his hero, Martin Luther King Jr.

There was a basketball tournament held in King’s name and a yearly radio station tribute, but not much more. So in late 1981, while watching the Westernettes drill team practice at the Doolittle Community Center on J Street, Williams came up with an idea.

“I was like, ‘Put a car or two with this, we’ve got a parade,’” the former Nevada assemblyman recalled.

“There were only about 13 entries,” Williams said. “Rev. Willie Davis of Second Baptist, I said to him, ‘Catch that firetruck. Run and catch it, and you are the grand marshal.’ It was a good experience. It started it.”

On Monday, as the nation celebrates the birthday of the American civil rights leader, the Dr. Martin Luther King Jr. Day Parade will take place in Las Vegas for the 39th time. The parade is one of the longest-running of its kind in the nation.

This year’s parade will be virtual because of the COVID-19 pandemic, but organizers say it will be no less special. The online presentation will feature videos from performers and bands, a live DJ, speeches from elected officials and a documentary with historical photos.

The 10 a.m. parade may be watched via a livestream available on the parade organization’s website, www.kingweeklasvegas.com.

Las Vegas Mayor Carolyn Goodman is one of the hundreds of thousands of people expected to tune in.

“I remember when the first Martin Luther King Jr. parade was held in 1982 in Las Vegas, and it has continued to be an important and meaningful event in our community for nearly four decades,” Goodman said recently. “It is always one of the most well-attended annual parades because everyone relates to Dr. King’s message of equality and his legacy of peaceful protest that brought about much-needed change in our country.”

More than a parade

One of the parade’s longtime organizers, Deloris Sawyer, 66, moved to Las Vegas from California in the late 1970s. She took a job as a respiratory therapist at a local hospital but said she resigned days later when she was exposed to blatant racism on the work staff. Shortly after that, she learned that she couldn’t take a cab to her home on the Westside after dark.

“I was like, ‘What do you mean?’” Sawyer told the cab company. “That really started my passion. I hadn’t dealt with any type of prejudices like that before.”

She met Williams around the same time. She joined a handful of community activists in starting the Dr. Martin Luther King Jr. Committee, which was eventually headquartered in a small public housing unit in Las Vegas. One of the anchoring goals of the committee was to ensure that the parade was as good as it could be, but the committee’s bigger goals were especially significant.

“We had to address other issues like educating the community, making sure the education and economic roadways are open to all people in west Las Vegas, just like they are for the rest of the community,” Sawyer said.

Another top priority of the committee was to make sure that Nevada honored King’s memory through a statewide holiday, matching federal recognition of the holiday in 1983. The committee relentlessly lobbied for the holiday in the state, with leadership from then-Assemblyman Morse Arberry, then-Sen. Joe Neal and Williams.

The holiday became a reality in Nevada in 1987, the year Williams joined the Assembly. A highlight for Sawyer was when King’s wife, Coretta Scott King, came to Las Vegas to formally recognize the committee’s work.

Another goal of the committee was to improve the quality of life for underserved residents in the Historic Westside. The mission drew members from a wide spectrum of backgrounds. Las Vegas businesswoman Elaine Wynn was a huge help as a board member, Sawyer said.

“We wrote grants to start an after-school program to help kids,” Sawyer said. “Some 19 different schools participated. It was about community enhancement, and it was especially about helping our young people, which was very near and dear to my heart, as it was for our other members.”

A yearly banquet held during the week of the parade raises large amounts of money for scholarships for local young people, Sawyer said. The mission is making sure low-income children have “the same opportunities as everyone else.”

A parade for generations

The parade, like all the civic engagement efforts surrounding it, celebrates King’s legacy. Longtime members of the committee say it has involved decades of hard work by a long list of people who care deeply about Las Vegas.

Charter members Vera Sampson and Nedra Cooper reflected recently on how the parade expanded from just a handful of entries in the early 1980s to hundreds now.

“When we heard ‘Martin Luther King,’ that was enough for us. That’s all we needed to hear,” Cooper said of why she and Sampson got involved in 1982.

“Nothing was going on in the community to honor his work,” Sampson said. “We saw it as an opportunity to be involved, educate, to inform our community.”

The parade is now held in downtown Las Vegas, bringing thousands to the streets year after year to watch the floats, the bands, the musicians and even the grand marshal pass by in memory of King.

“We had no idea the scale the parade would create,” Cooper said. “We did a lot of work, spent a lot of nights planning, organizing day and night.”

Byron Goynes is the director of the Martin Luther King Jr. Senior Center in North Las Vegas. He remembers going to the parade as a child with his family. He in turn took his children to the parade as they grew up. Since his childhood, Goynes has never missed one.

Williams, who grew up as a child in Louisiana experiencing segregated schools and a segregated society, views the parade as one of his greatest accomplishments. He’s sure the parade will continue for generations to come, and he hopes it will remind all Southern Nevadans of the importance of living by King’s message.

“We want to bring people together to remember Dr. King’s vision of a beloved community where people can live comfortably, live safely,” Williams said. “We don’t have to all be together, all the time, in the same neighborhoods, but we all have to respect each other. That vision still holds true today. With all the turbulence and uncertainty we have in our nation, there is always that message of peace and love and understanding of other people.”