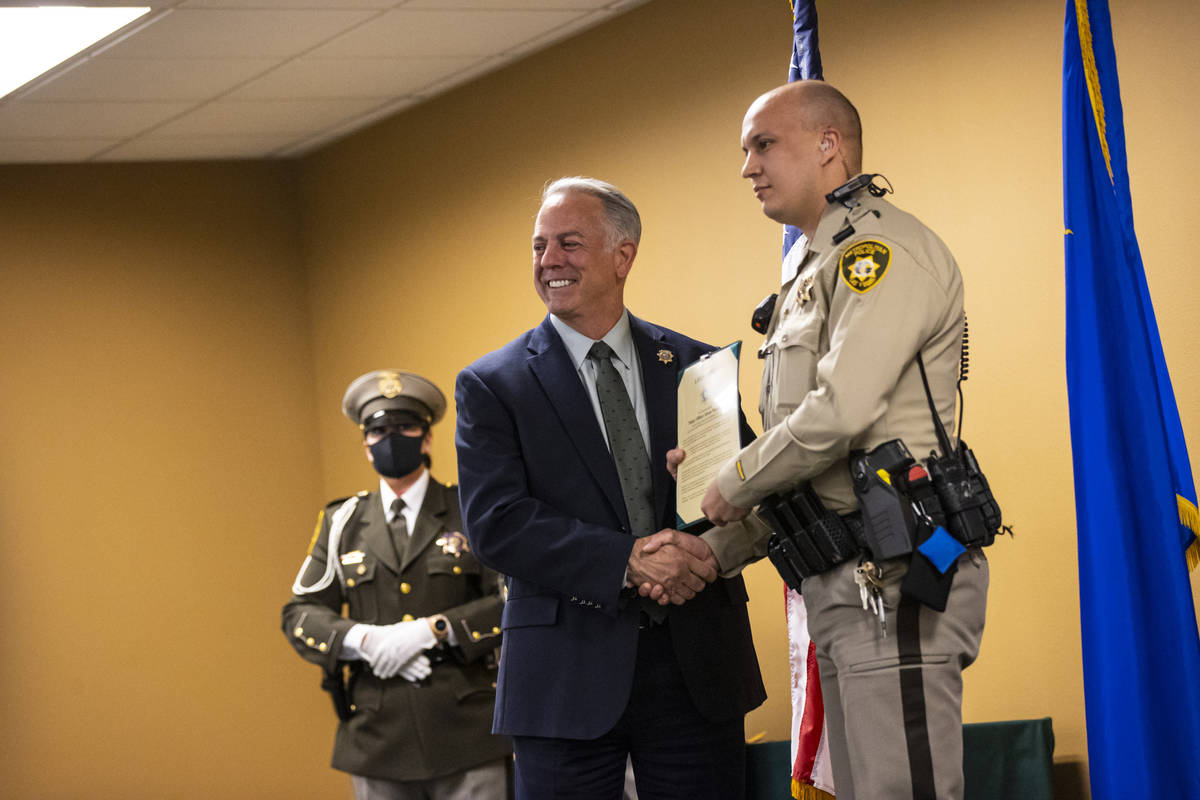 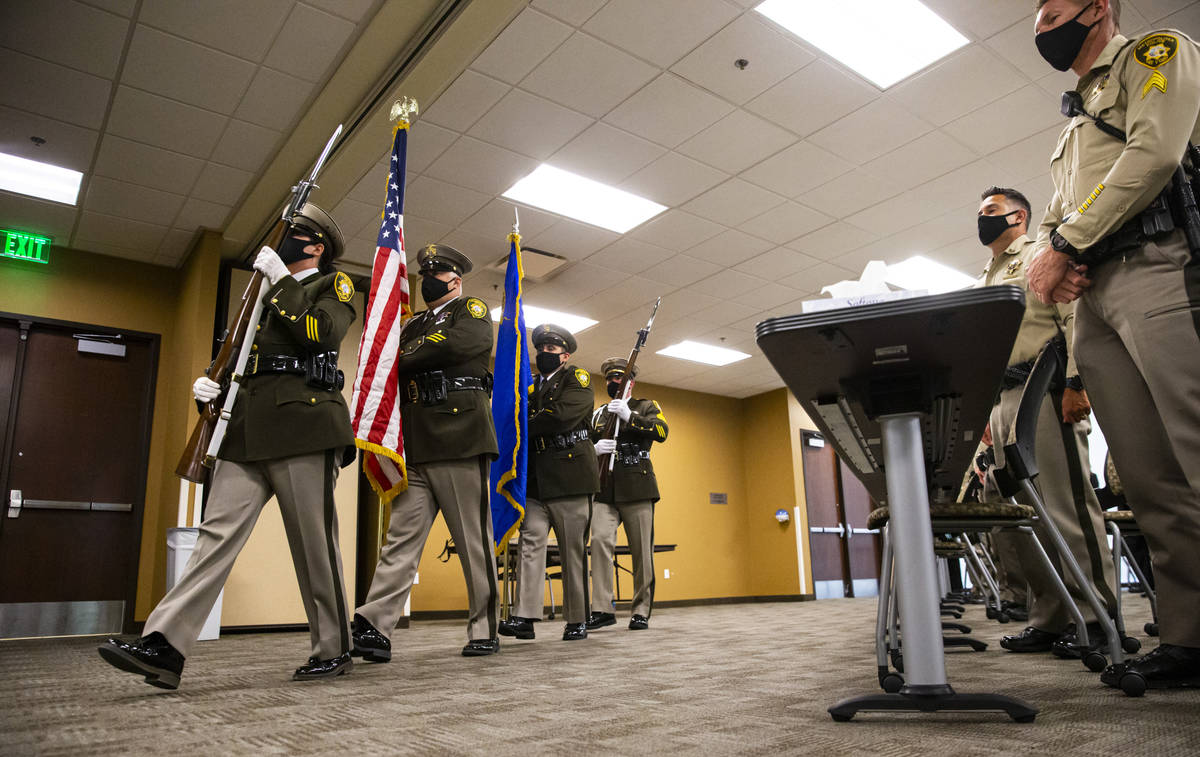 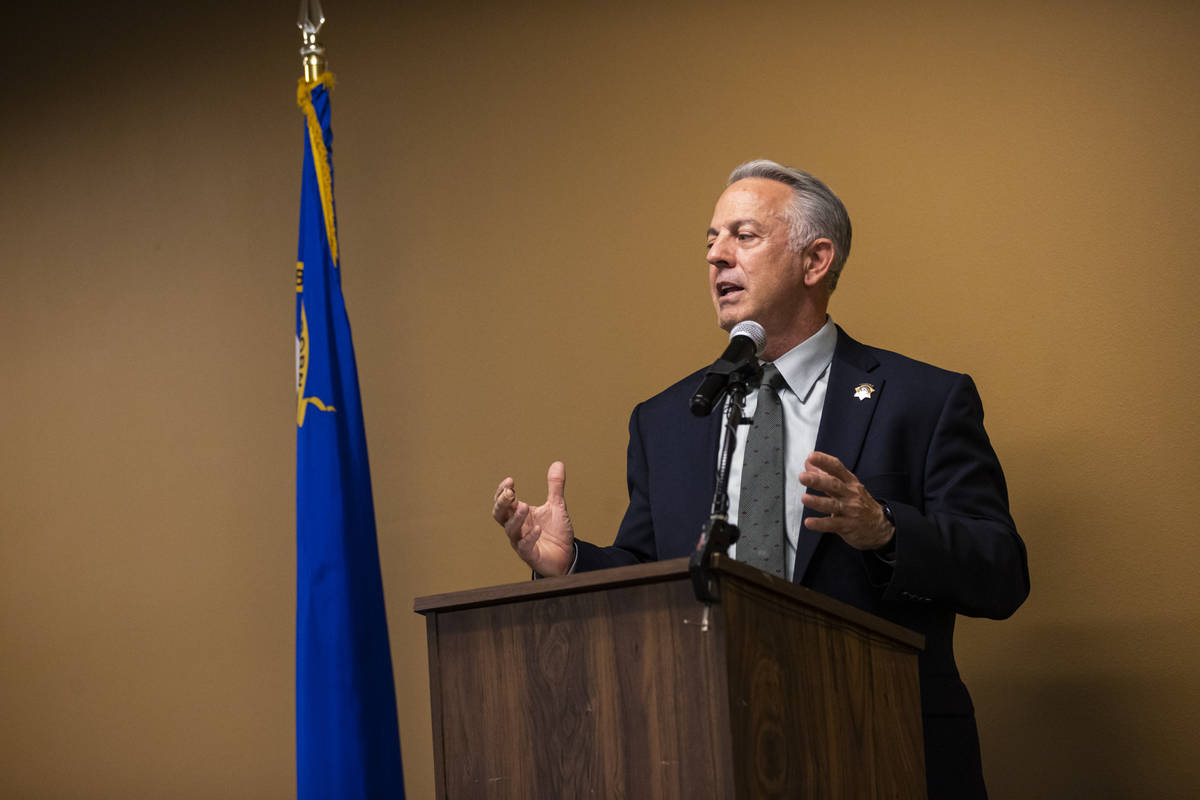 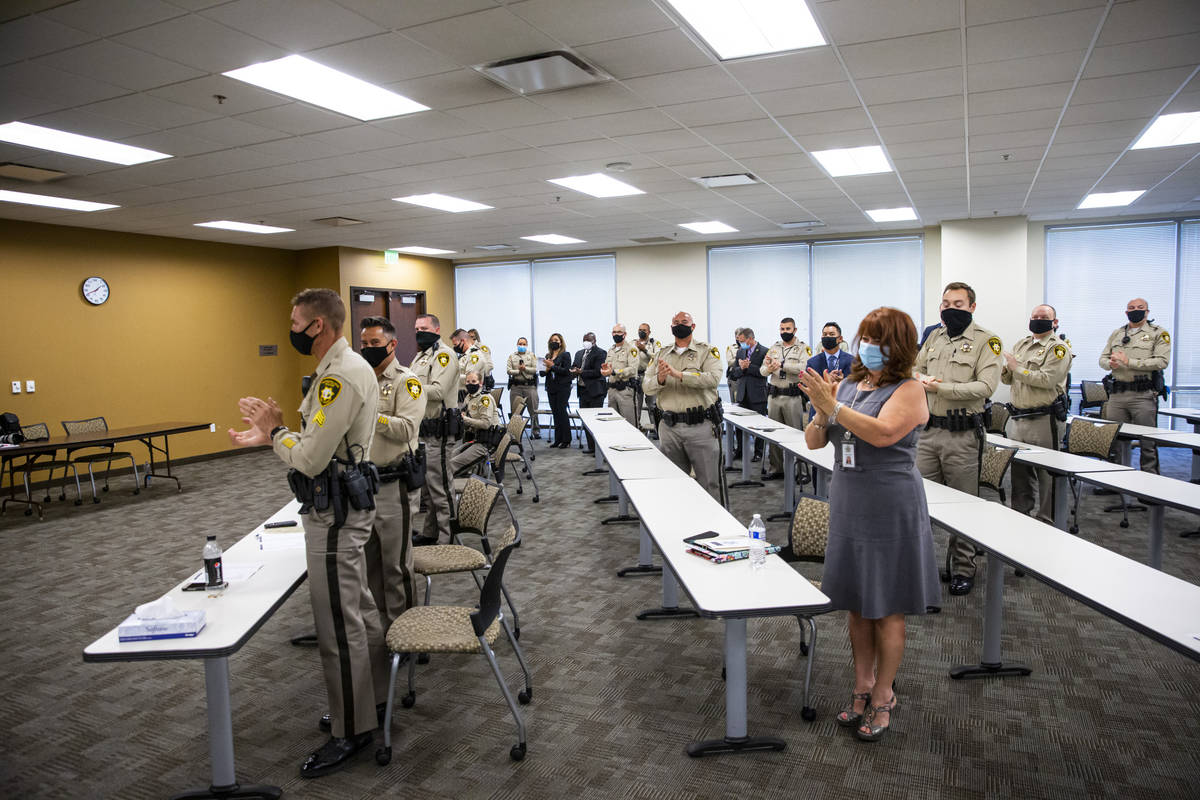 Attendees clap at the end of a ceremony for "bravery and excellence" at Metropolitan Police Department headquarters in Las Vegas on Wednesday, April 7, 2021. (Chase Stevens/Las Vegas Review-Journal) @csstevensphoto 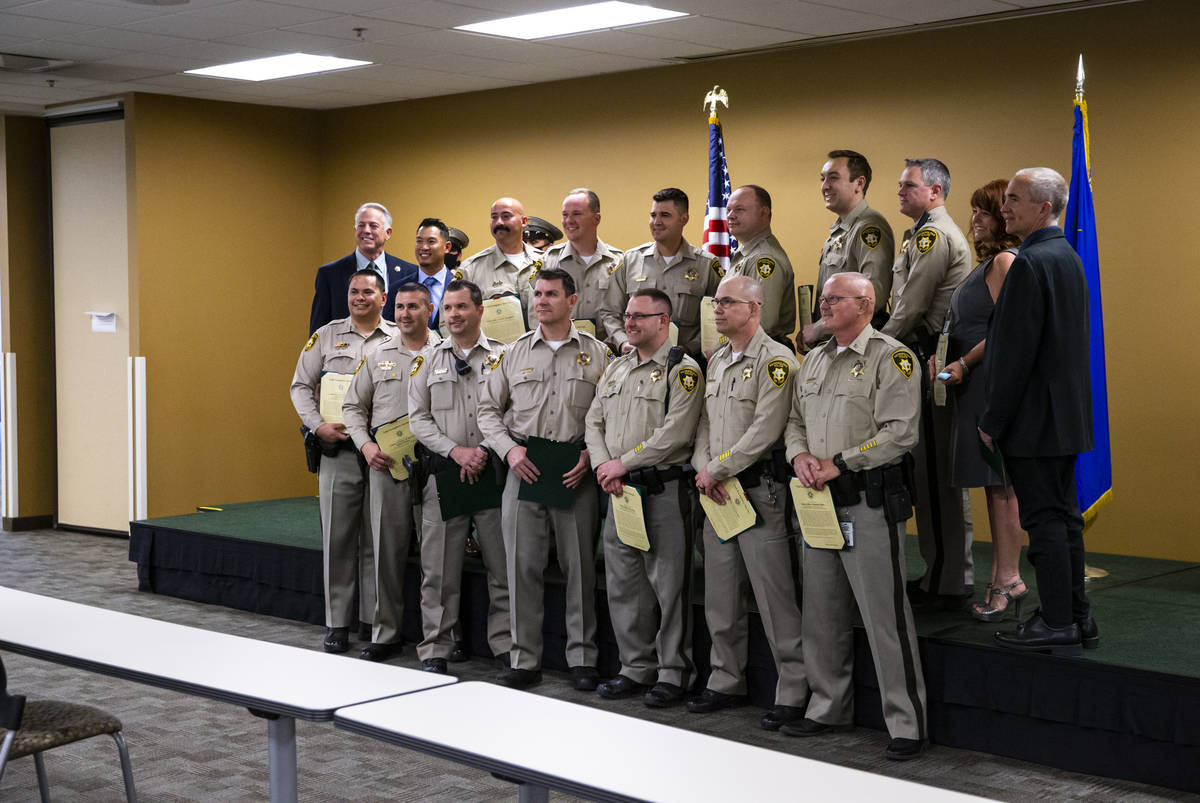 Members of the Metropolitan Police Department digital policing unit pose for a picture with their awards during a ceremony for "bravery and excellence" at Metro headquarters in Las Vegas on Wednesday, April 7, 2021. (Chase Stevens/Las Vegas Review-Journal) @csstevensphoto 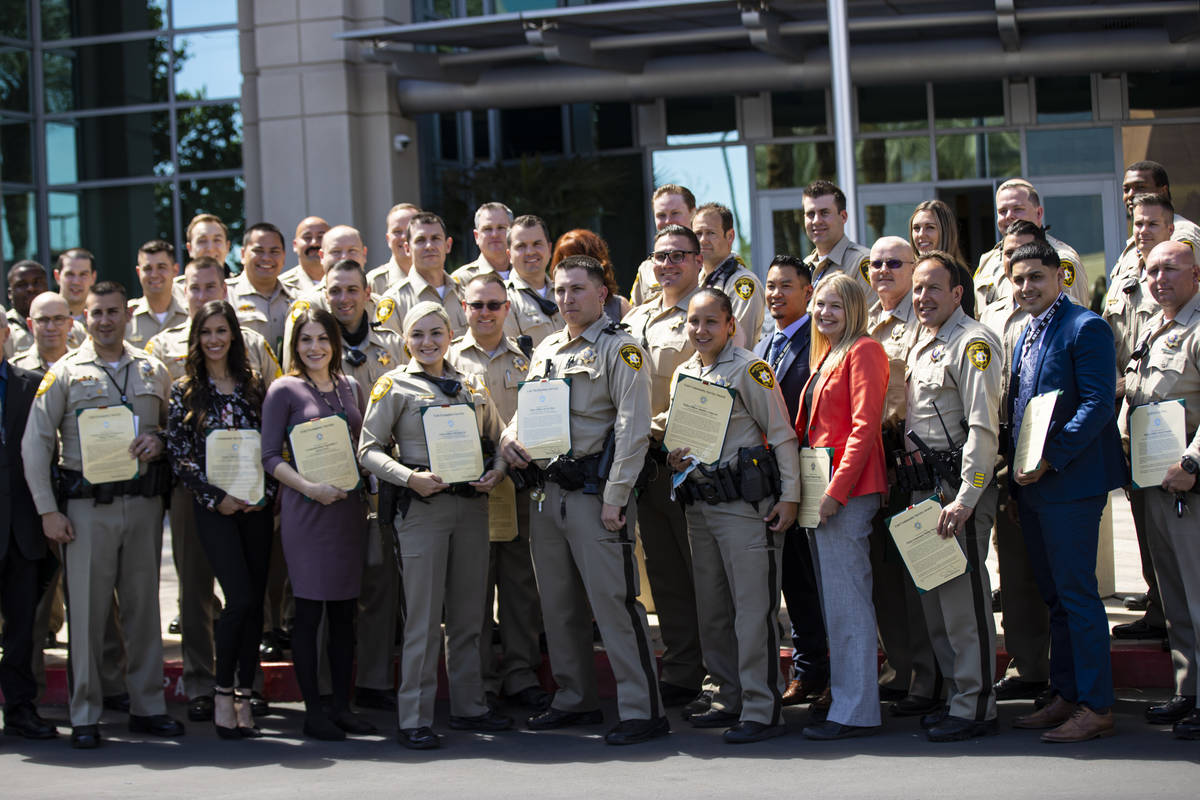 Metropolitan Police Department officers and employees pose for a group picture with their awards after a ceremony for "bravery and excellence" at Metro headquarters in Las Vegas on Wednesday, April 7, 2021. (Chase Stevens/Las Vegas Review-Journal) @csstevensphoto

Jordan Fox knew something was wrong when a father ran up to her, clutching his 2-year-old son who had just had a seizure.

“He wasn’t really responsive, which is normal after a seizure, but then he started to continue to turn blue and that’s when I realized that he wasn’t breathing,” said Fox, remembering when the man flagged her down last year. “He didn’t have a pulse so I started CPR.”

Without Fox’s actions, the boy would have died, Metropolitan Police Department Office of Public Information Director Jamie Ioos said Wednesday. Fox was one of 63 employees who the department awarded for acts of “bravery and excellence” during a commendation ceremony Wednesday afternoon.

The awards highlighted 14 “incidents of outstanding work performed by officers and civilians,” and were given for community service, exemplary service, lifesaving and meritorious service, the department said.

“As you can imagine, every scenario they’re put in the unknown when they get calls for service, and the individual might be involved in an accident, or a victim of domestic violence, or a shooting, or anything you can imagine,” he said. “These individual officers have showed up and rendered aid, and called for medical services and were able to save lives on more than one occasion.”

Fox had been working for Metro for less than a year when the 2-year-old’s father found her outside a business on March 3, 2020. Fox said the man was already on the way to the hospital when his son started having a seizure, so he pulled his car over and ran up to Fox, the boy limp in his arms.

Before becoming an officer, Fox spent six years as an emergency medical technician with MedicWest Ambulance, she said. When she saw the boy, her emergency training kicked in.

It was her first time as an officer when someone’s life was in danger, Fox said. She performed CPR until an ambulance arrived to rush him to a hospital.

She hasn’t kept in touch with the boy, but she was told last year that he was expected to make a full recovery, Fox said.

“I hope he’s out there playing, having fun,” she said Wednesday.

The department also handed out awards for officers who formed a hockey team with the Golden Knights to help at-risk children. The entire Digital Forensics Lab received exemplary service awards because of the unit’s expansion in 2019.

Other lifesaving awards were given to officers who helped people survive gunshot wounds, prevented a baby from drowning, helped save a woman suffering from diabetic shock, and tracked down a missing teenage girl.

Officer Jovan Magazin received a lifesaving award for helping a scooter driver who was involved in a crash on April 18, 2020.

Magazin came across the crash while driving to work, and he blocked traffic with his car to help the woman who had been driving the scooter, Ioos told the crowd on Wednesday.

“The victim was bleeding profusely, her left leg was severed above the knee,” Ioos said. “Knowing the woman was in dire need of help, officer Magazin ran back to his vehicle, called 911 and grabbed his tourniquet.”

First responders initially thought the woman would die, but doctors later said the tourniquet helped save her life, Ioos said.

Although the officers’ family members could not attend the ceremony because of COVID-19 precautions, Lombardo said Wednesday was the first public ceremony the department has been able to host since the start of the pandemic.

“We hope that today’s ceremony is a sign that we are returning to normal, and we are grateful to be sharing the story of Metro today,” he said. 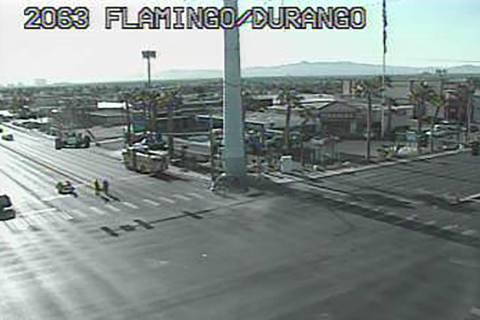 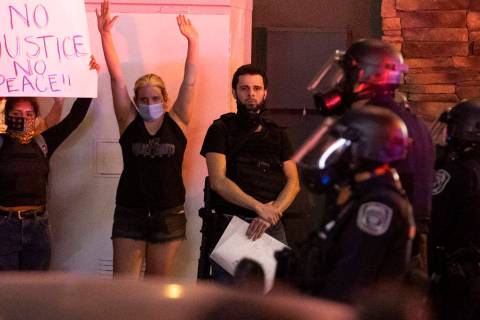 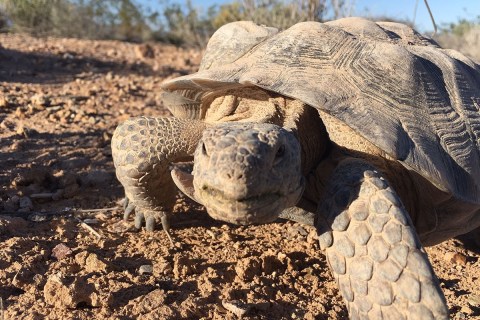