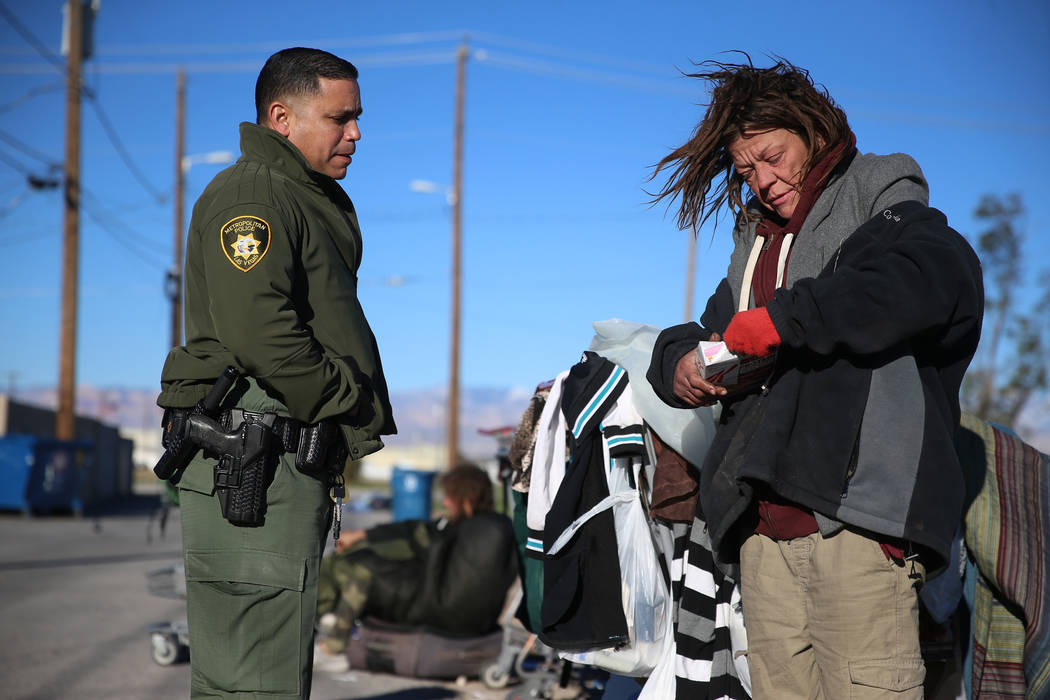 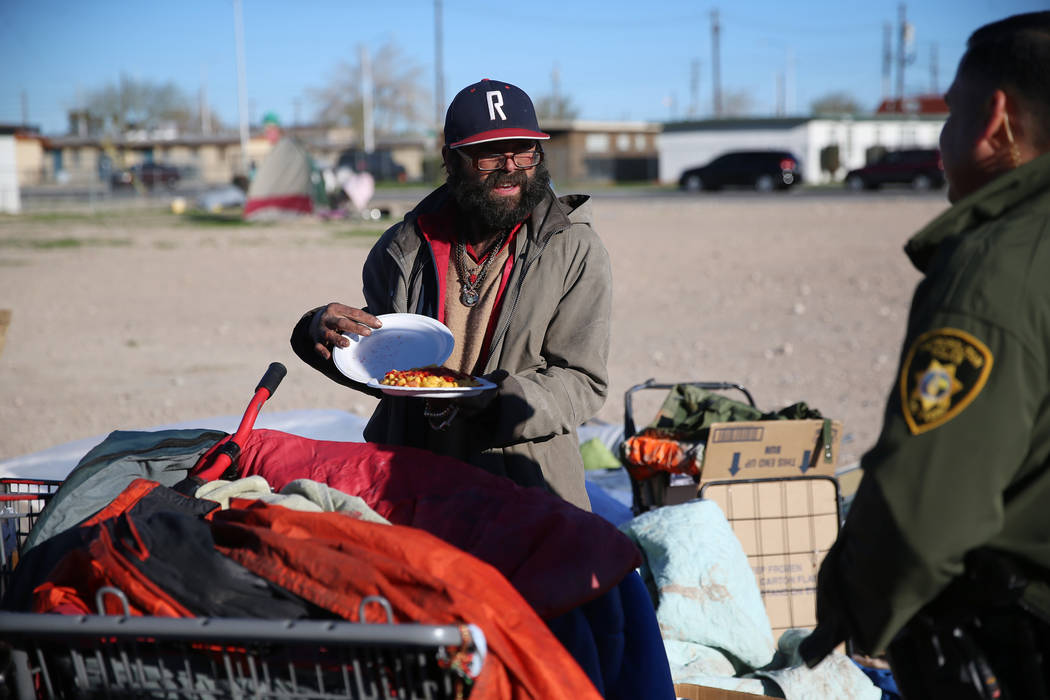 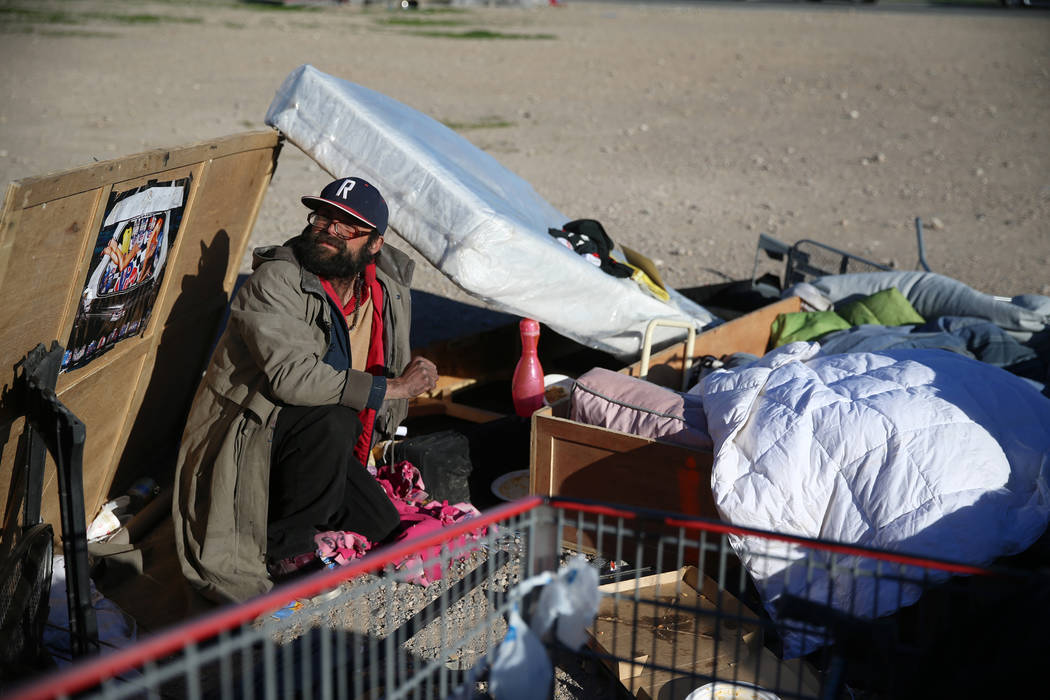 Homeless man Anthony Muratore sits on the floor with his belongings near the intersection of W McWilliams Avenue and H Street in Las Vegas, Thursday, March 14, 2019. The Las Vegas Metropolitan Police Department with members of MORE are working together to combat homelessness. Erik Verduzco Las Vegas Review-Journal @Erik_Verduzco 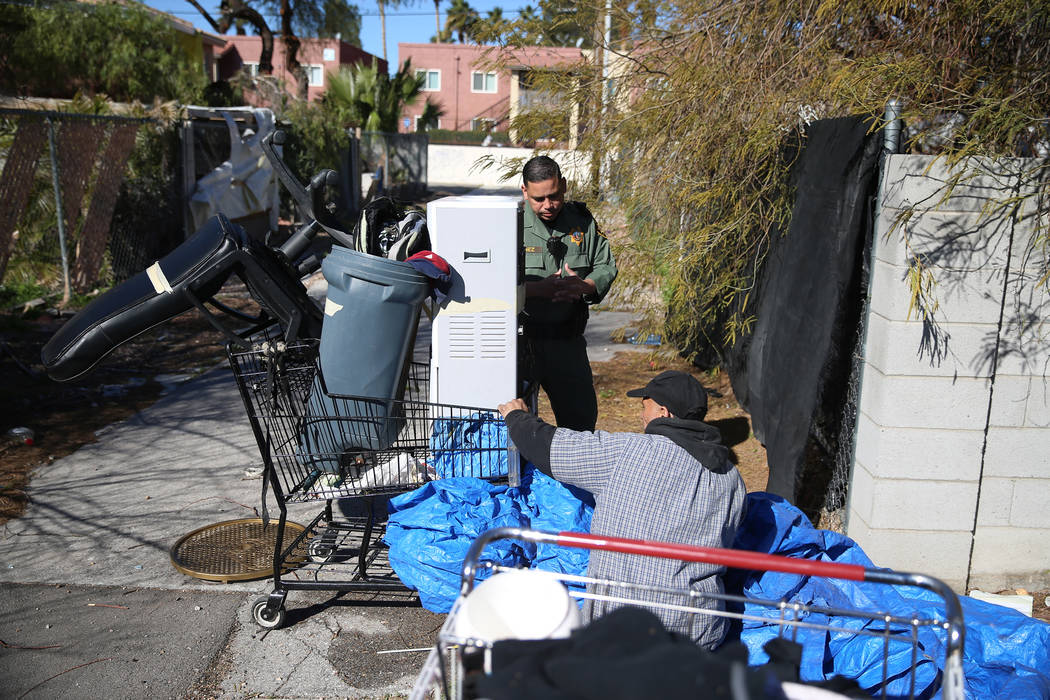 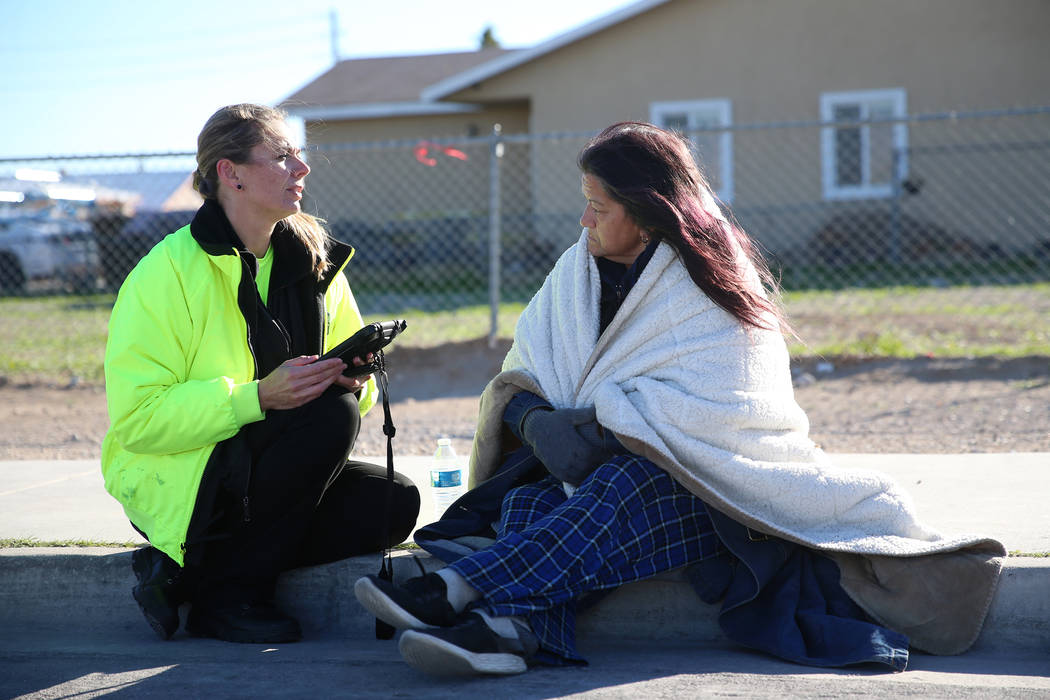 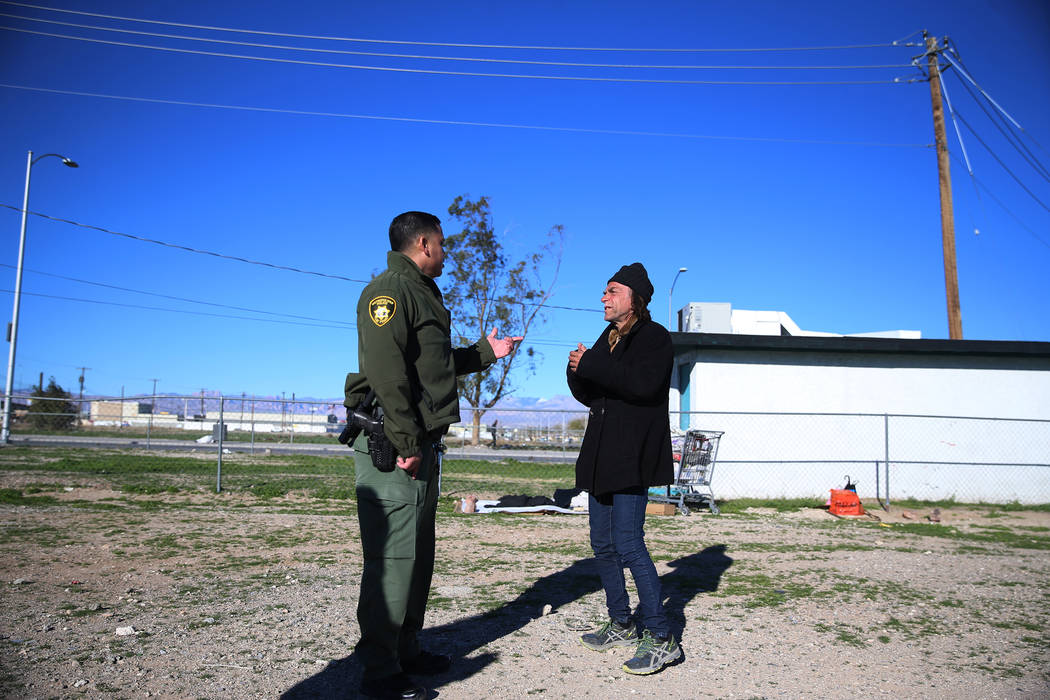 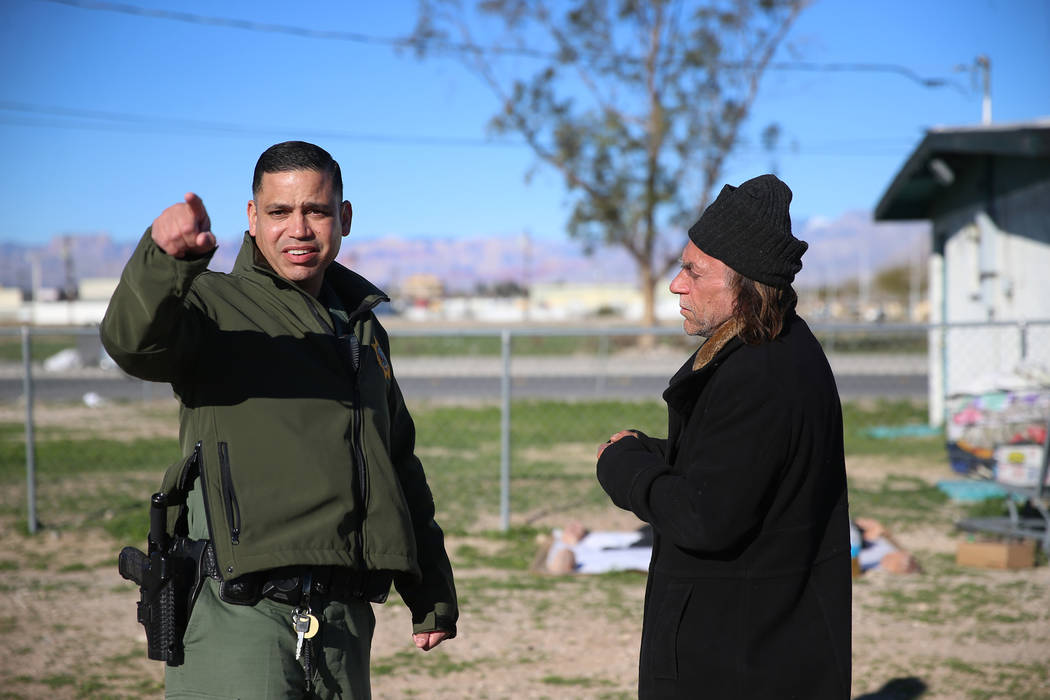 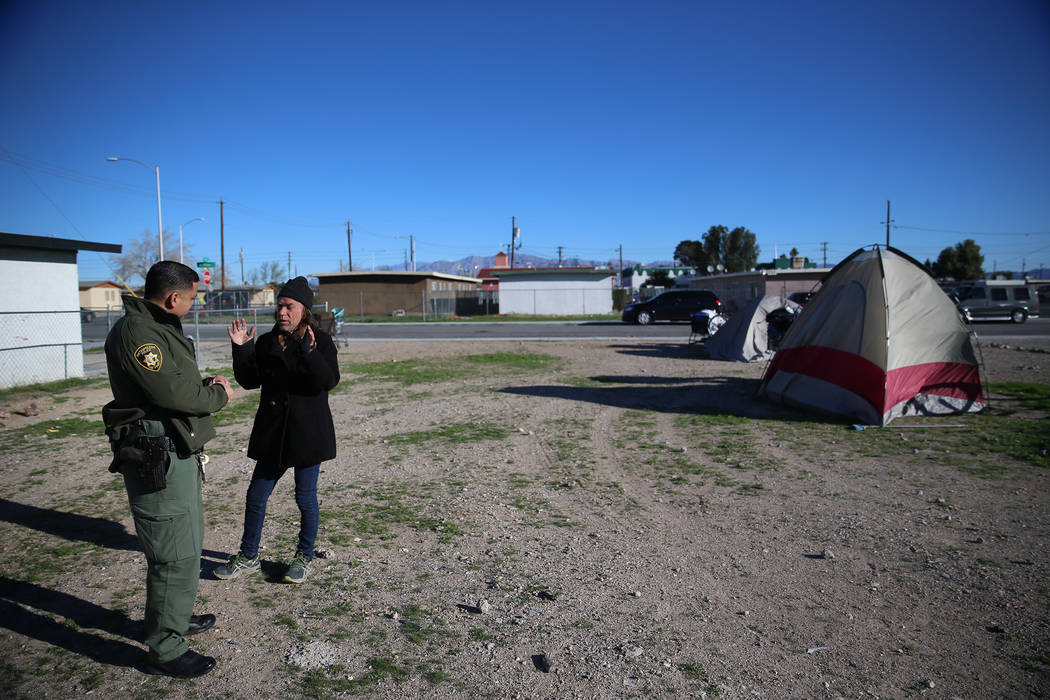 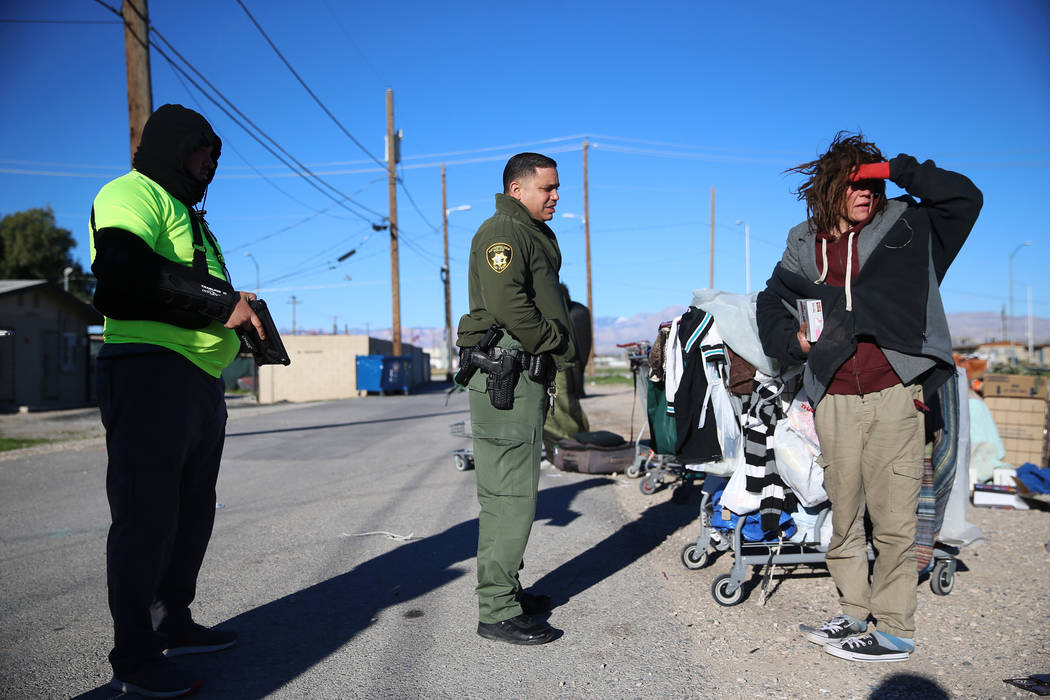 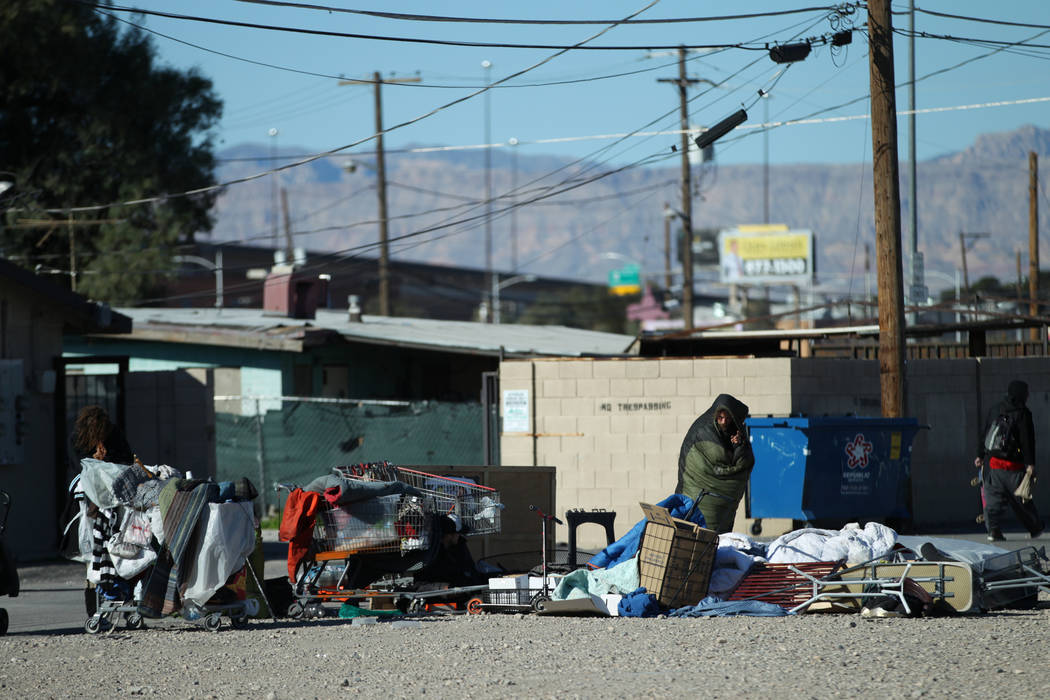 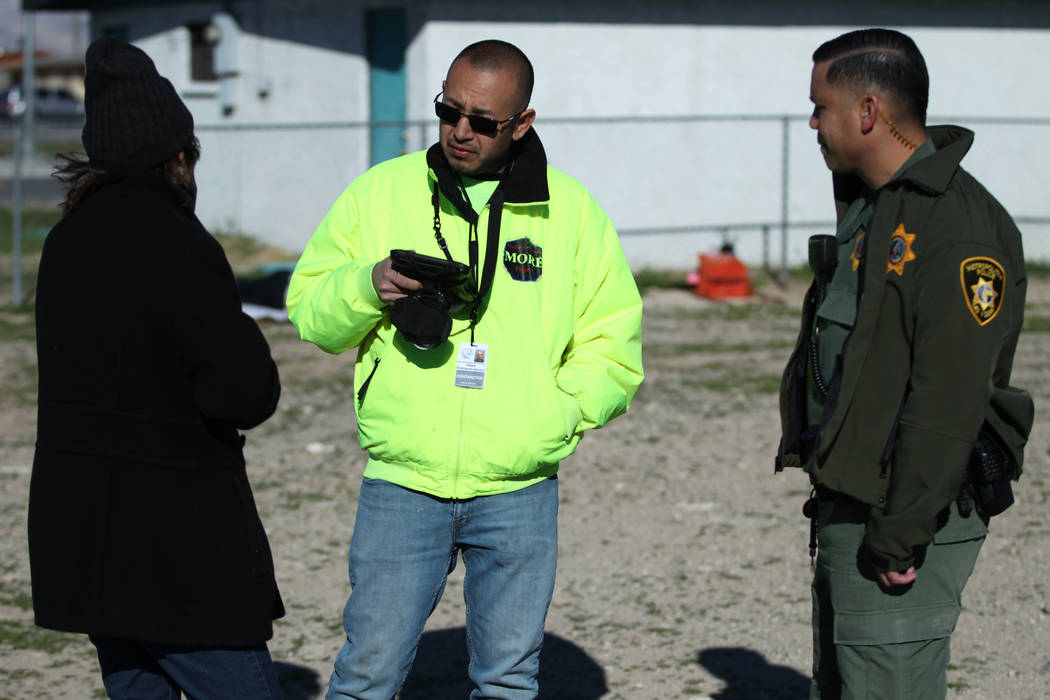 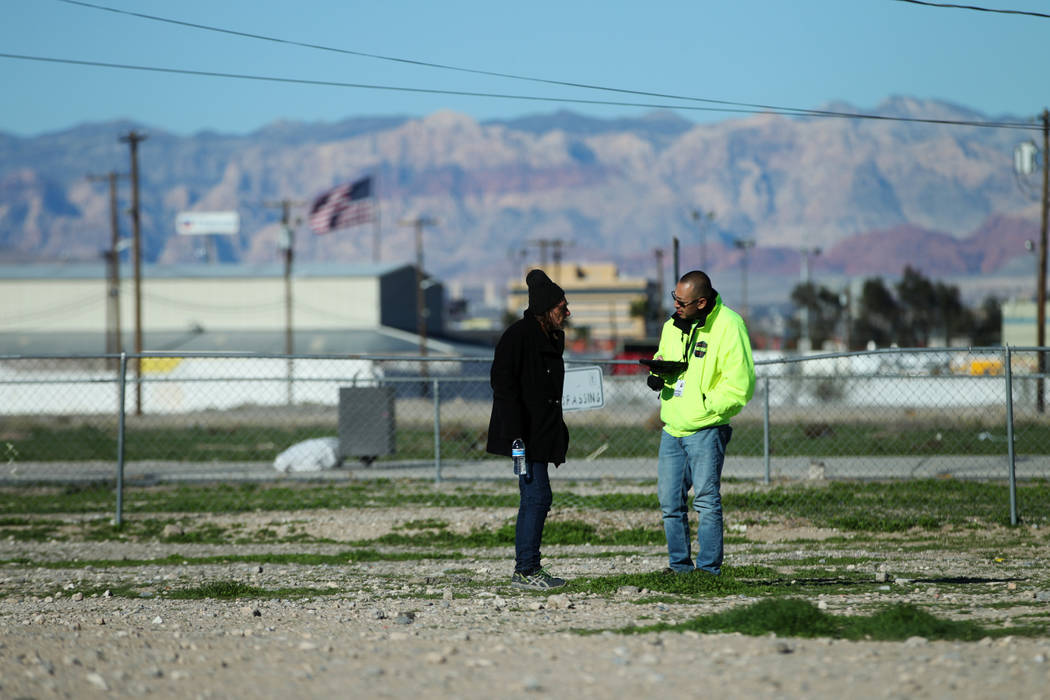 When Las Vegas police officers Angel Nunez and Christopher Swallia begin their 12-hour shifts at 5:30 a.m., the city’s most vulnerable residents are just starting to stir.

That’s by design, so they can approach homeless encampments before residents set off to meet the challenges that each day brings when you’re living on the streets.

While Metropolitan Police Department police officers and the homeless interact on a daily basis, many of those contacts are not pleasant for either party.

But Nunez and Swallia and the six other members of the department’s newly expanded Homeless Outreach Team are looking to change that dynamic.

They aren’t focused on arresting or citing the homeless they encounter for jaywalking or sleeping on sidewalks or park benches or other nuisance crimes. Instead, they tell them what services are available and try to persuade them to sign up.

Since Metro added six officers to the team in December, the unit has made contact with more than 3,000 homeless people.

Of those, 791 have accepted services and 147 are now self-sustaining and have been housed, the department says. At the same time, the team has cleared more than 1,300 camps that were no longer occupied.

That, it hopes, will translate to another long-term benefit: Metro responds to nearly 3,000 homeless-related calls for service per month on average.

Officers in the Homeless Outreach team are part of a broader effort by the city to get the homeless to move to the Courtyard Homeless Resource Center it operates downtown and enroll in the social services provided there. They often work with what the city calls its MORE team, short for multiagency outreach resource engagement.

A reporter accompanied officers and social workers on a MORE team visit to a downtown homeless encampment near H Street and McWilliams Avenue on a recent windy and chilly morning.

The first rule, Nunez explained as he approached a woman wrapped in layers of clothing, is to “try to break the ice.”

The woman, sitting on the curb, cuddled her blanket and rubbed her hands together as the wind whipped her cheeks pink.

“You keeping warm?” he asked her. She nodded.

It typically takes a few encounters before the homeless in the camps feel comfortable around the officers; the group is inherently distrustful of law enforcement.

But Swallia made clear at the outset of the visit that they weren’t there to harass them.

“We’re not out here to pick you up. We’re out here legitimately trying to give you help,” he said.

On this morning, social workers, representing WestCare Nevada addiction treatment, the Salvation Army, U.S. Vets and other groups, checked individuals in on tablet computers, making sure they were in the Homeless Management Information System that tracks the service needs of the estimated 6,000 homeless people scattered throughout the county.

One man, 56-year-old Charles Whritenour, held a plate of old macaroni and cheese and sipped on a gallon of homemade iced tea, joking that it was urine.

“It tastes like crack if crack was legal,” Whritenour responded.

Shannon Hennessy, who had just woken up, said she has been homeless since Thanksgiving 2016 and described herself as a “hoboette.”

“I don’t come from camping people; this isn’t really my jam,” she said, checking in with a social worker from HELP of Southern Nevada to ensure she held her spot on the housing wait list.

Anthony Malenica, who has been on the streets for seven years, also checked in with a social worker, but cast a wary eye at the officers from under bushy gray eyebrows.

“This is the first time I’ve actually seen them out here to talk to people,” he said. “They’re just out here baby-sitting.”

But he acknowledged that their presence had an upside.

Metro Lt. Joseph Sobrio, who calls the unit the “HOT team,” said Nunez and Swallia are one of four two-officer pairings who team up with various social service agencies. They work with the city’s MORE team, which includes multiple service providers, while the other three work elsewhere in Clark County, accompanying HELP of Southern Nevada representatives. All the teams work long shifts, four days a week.

Plans for the team started more than two years ago when Sobrio was assigned to improve Metro’s relations with the homeless community.

At the time, he said, the homeless were frequently being victimized by crime, including one killer who had attacked several sleeping homeless men with a hammer.

“That’s when we realized we had to get involved,” Sobrio said.

Over the next year, Sobrio researched other homeless outreach efforts by police and traveled to cities like San Francisco, Los Angeles, Miami and Seattle to see them in action.

He also interviewed local service providers and officers in Metro substations about their dealings with the homeless.

Then, the MORE team got started.

“Once we saw the success we were having, the amount of people that we were actually removing from homelessness, we upped it,” he said of the recent expansion.

The team analyzes data weekly to make sure their deployment strategies are up-to-date and they are responding to community needs.

“It’s become limitless when we started peeling the layers of this onion and we began building relationships and realized we are a very strong force in getting these resources out there.”

The teams now have significantly more knowledge than they did on patrol, Sobrio said, noting that all the officers on his team were selected because of previous work in homeless outreach or community-oriented policing.

Sobrio plans to soon start cross-training officers at the Clark County Detention Center to better connect inmates with those services.

“If we’re not in the jails, then we’re not serving the entire homeless population,” he said. “And if releasing officers don’t know what advice to give someone as they’re leaving jail, you’re essentially releasing someone into the situation they were arrested out of, and in no way does that reduce crime.”

Sobrio plans to spread the knowledge elsewhere as well, including to department dispatchers and employees who take 911 calls for after-hours needs.

So far, Sobrio’s team has made only one arrest, during a fistfight between two vagrants.

“We’re going to stop releasing people (back to) homelessness from the jail. We’re going to get people the second chance that they deserve.”

After visiting the encampment, Nunez, Swallia and the social workers next headed to an alley between two houses near Cedar Avenue and Mojave Road, where a neighbor had called that morning to report that a man with a large microwave and a filled shopping cart was setting up shop behind her house.

When the officers arrived, the man grew agitated.

“Where can I set up my tent at?” he asked belligerently.

Nunez referred the man to the Courtyard, telling him he could access a variety of resources and sleep at a secure, 24/7 facility.

He said working the streets and learning about the available social services has “opened his eyes.”

After working at the jail for 12 years, he said he is now able to see how inmates lived before they entered the jail system.

“It’s the people who are addicted to homelessness,” he said. “That’s our challenge. Finding each specific person’s vice in life, or vice in why they’re homeless.”

As it became clear the man couldn’t stay in the alley, he began to put his belongings back into the shopping cart. But it was unclear whether he intended to follow Nunez’s advice.

“I hate God. I swear, I hate God,” he muttered under his breath.