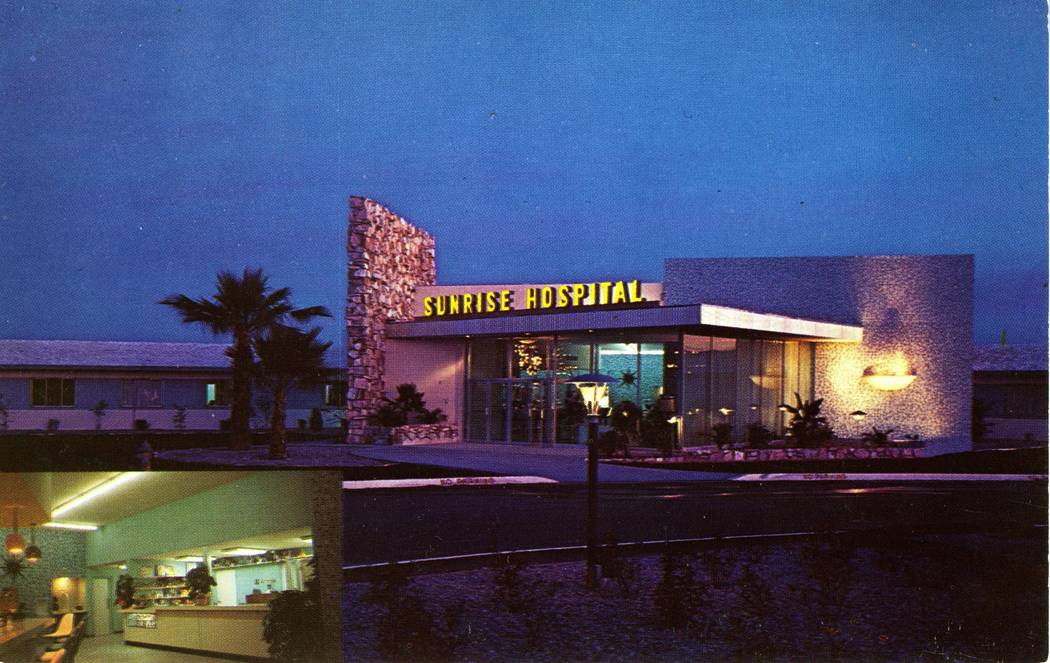 Color postcard of Sunrise Hospital and Medical Center circa 1958 or 1959. The hospital celebrates its 60th anniversary on Dec. 15, 2018 (Nevada State Museum, Las Vegas). 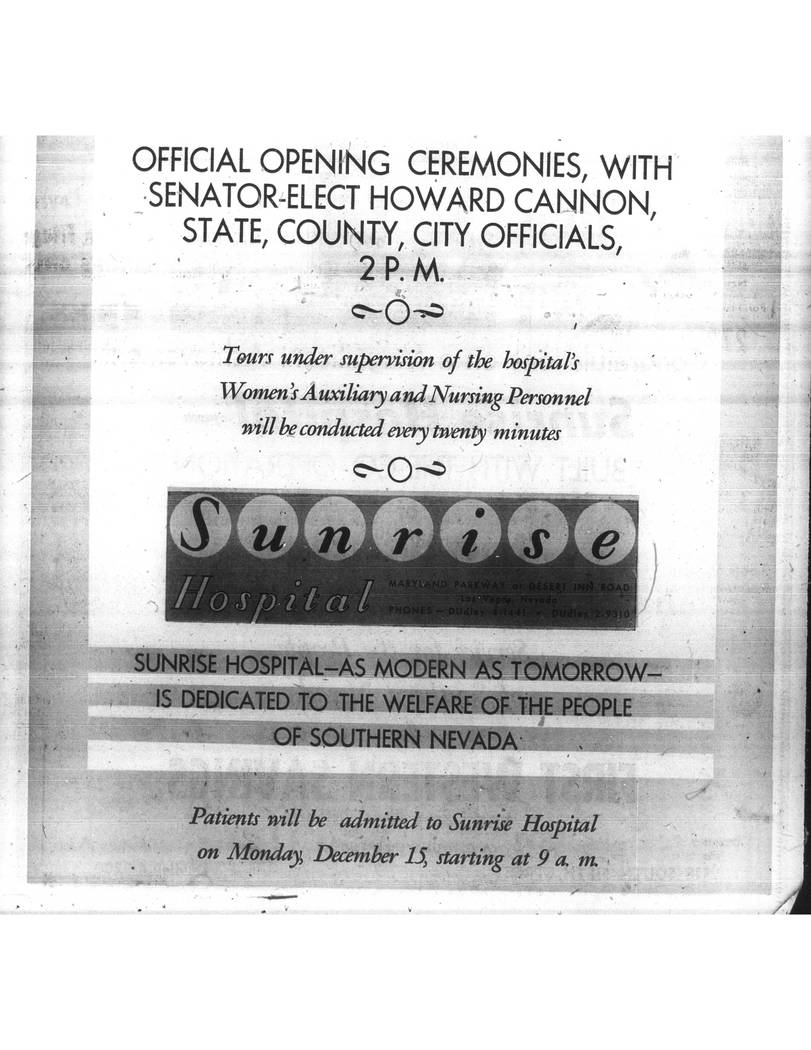 An advertisement for the opening of Sunrise Hospital ran in the Las Vegas Review-Journal on Dec. 14, 1958. The hospital celebrates its 60th anniversary on Dec. 15, 2018 (Nevada State Museum, Las Vegas). 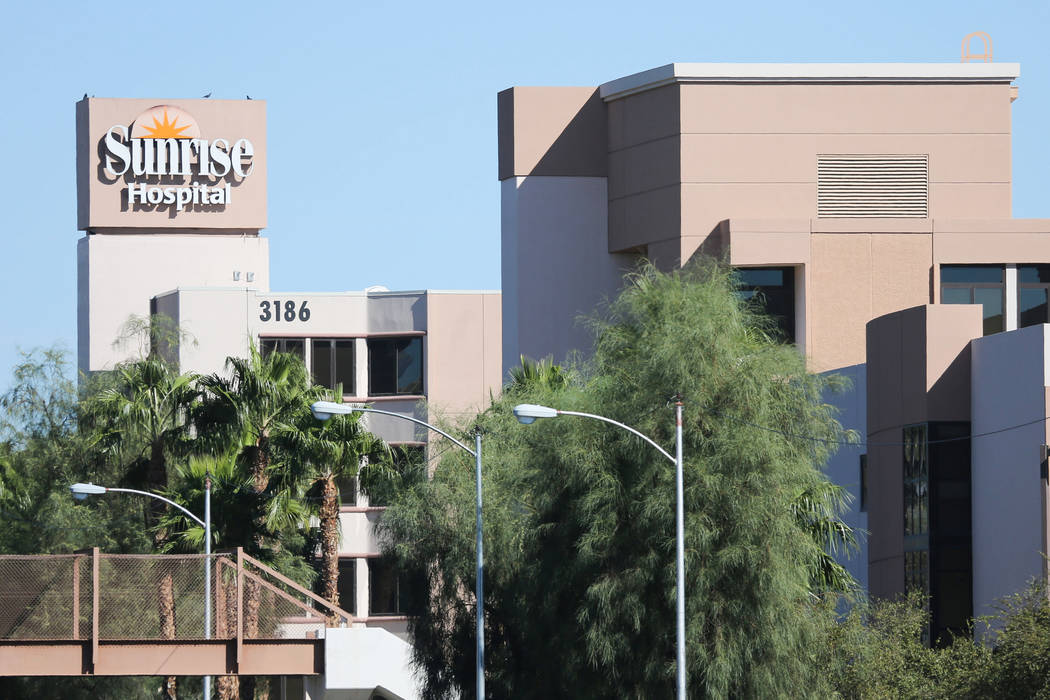 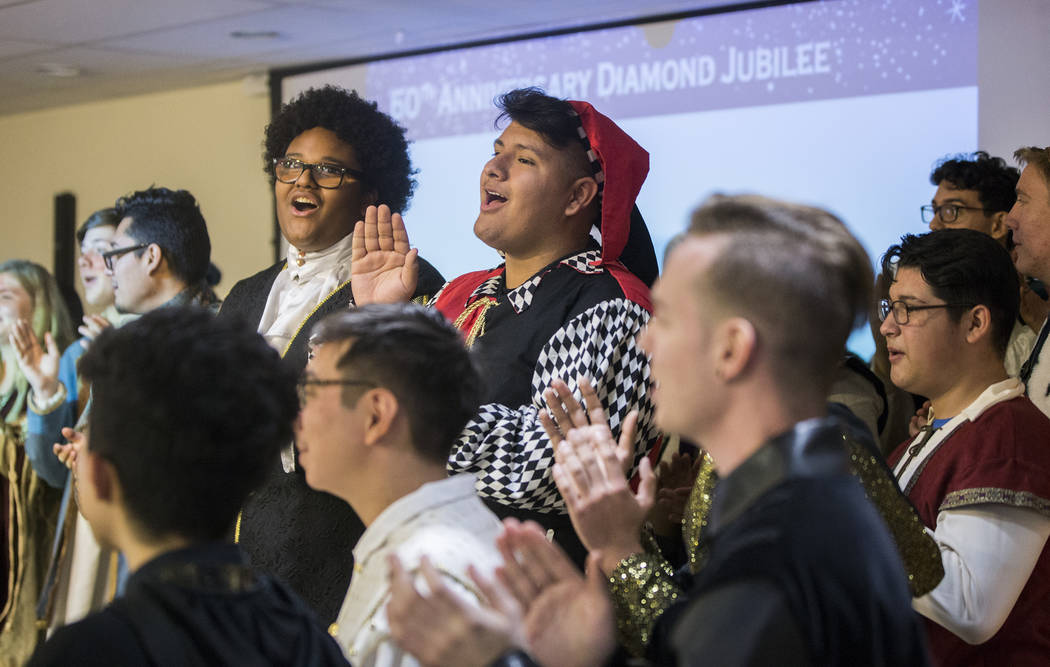 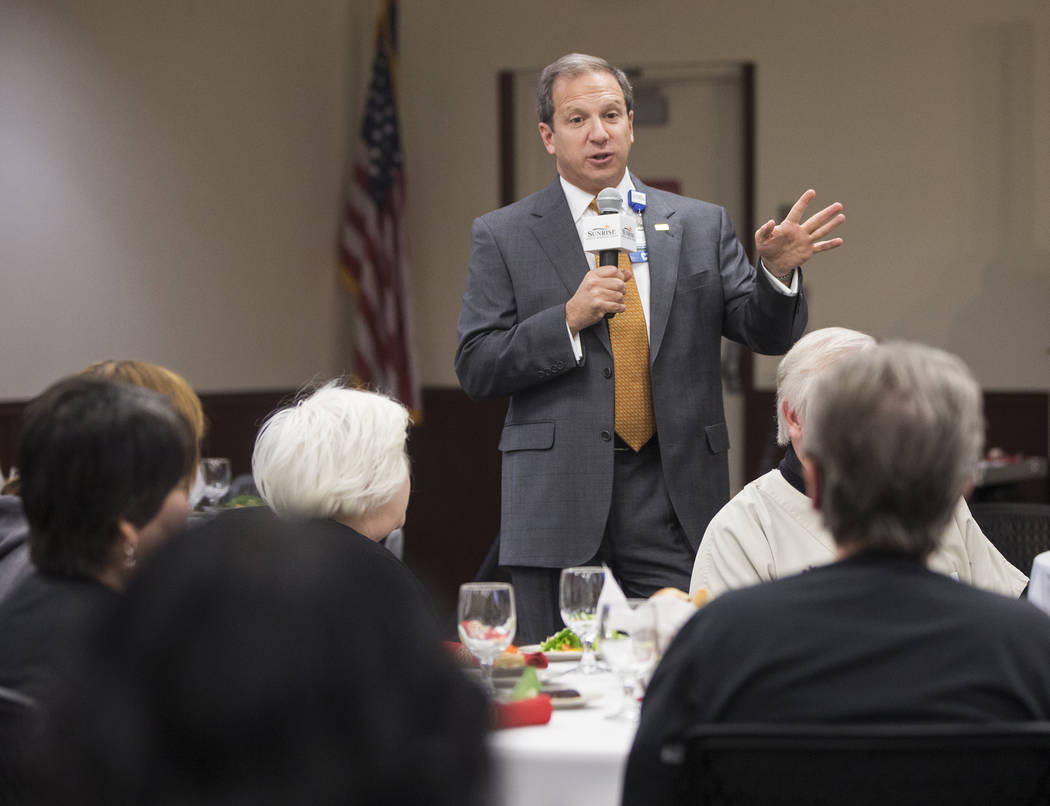 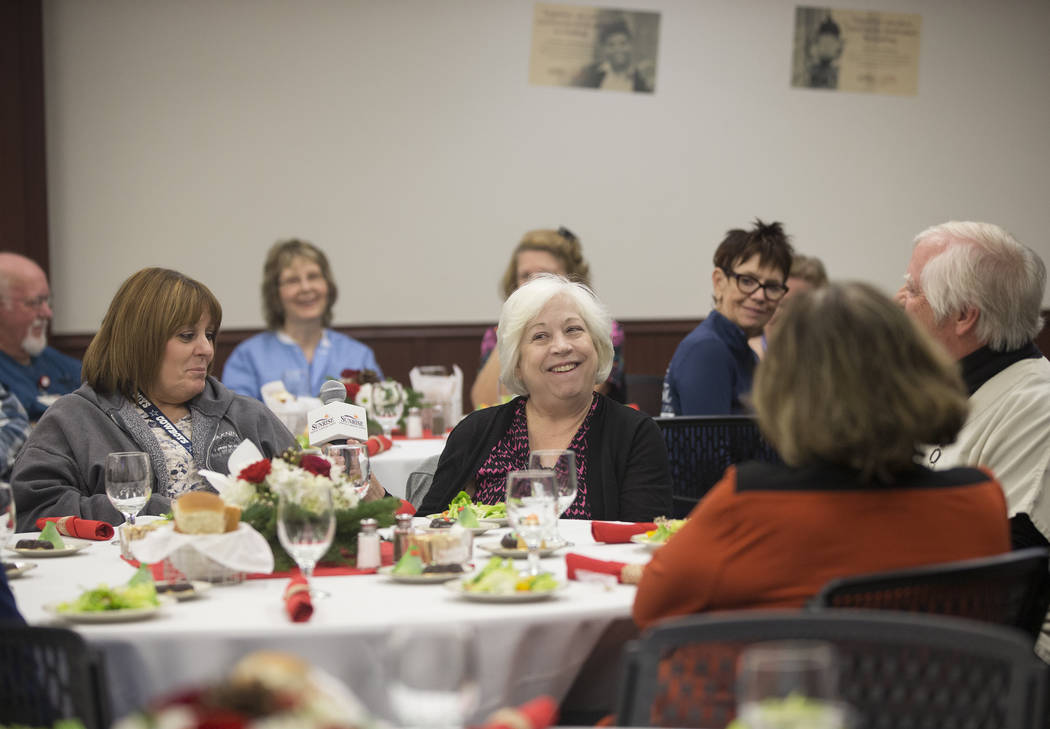 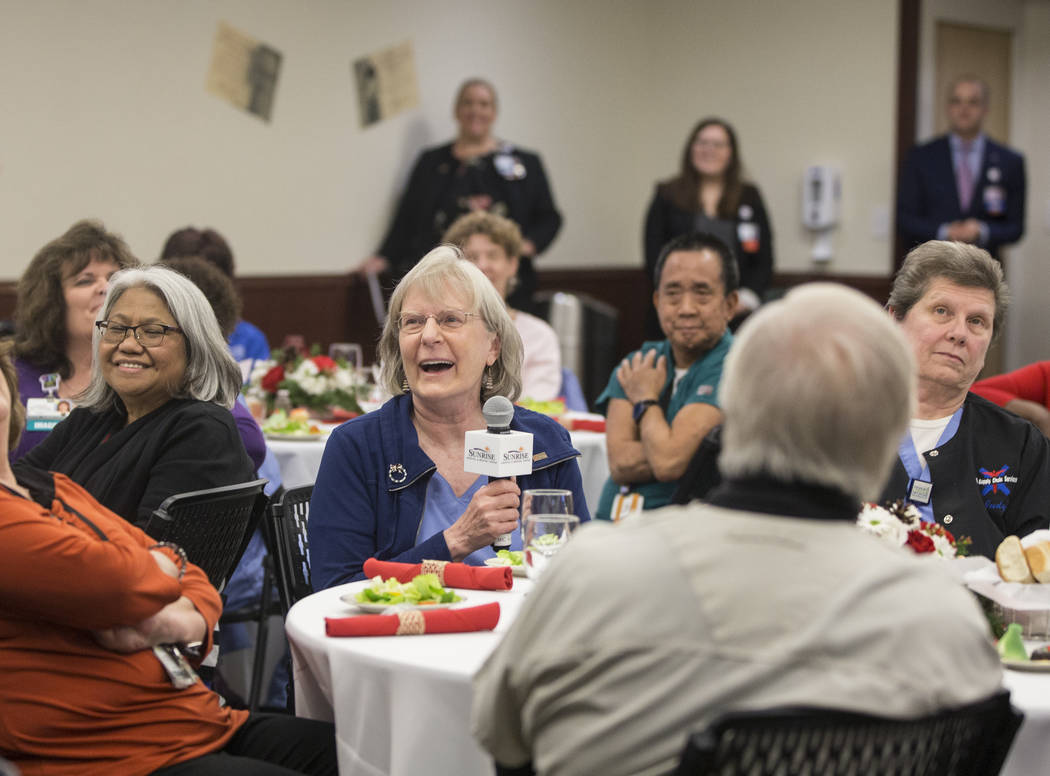 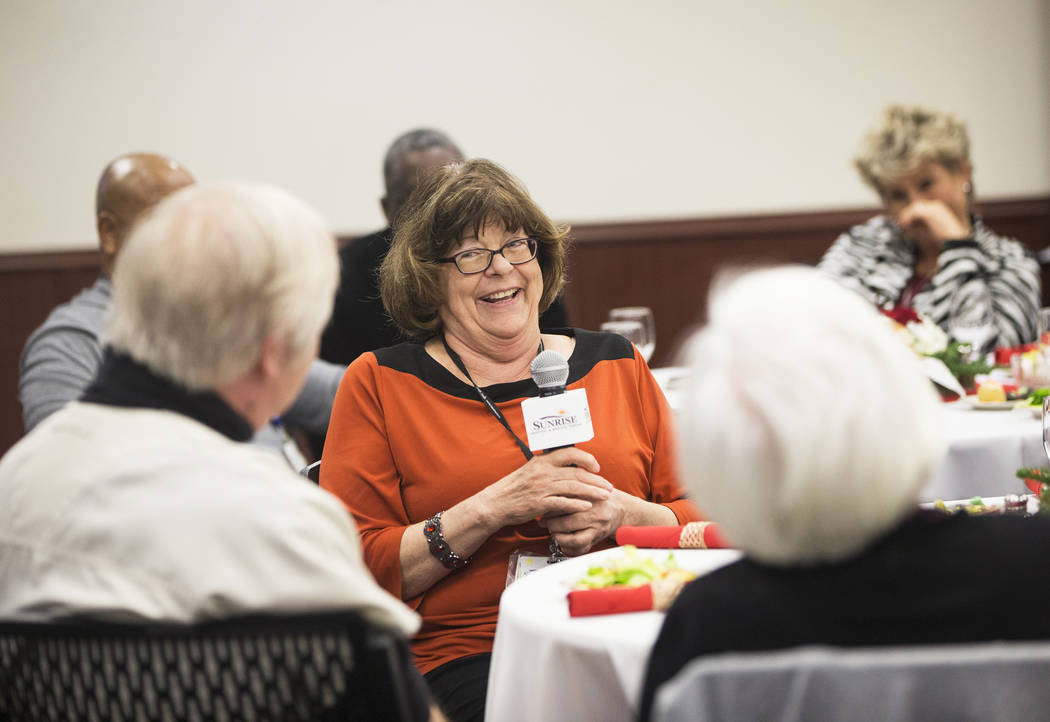 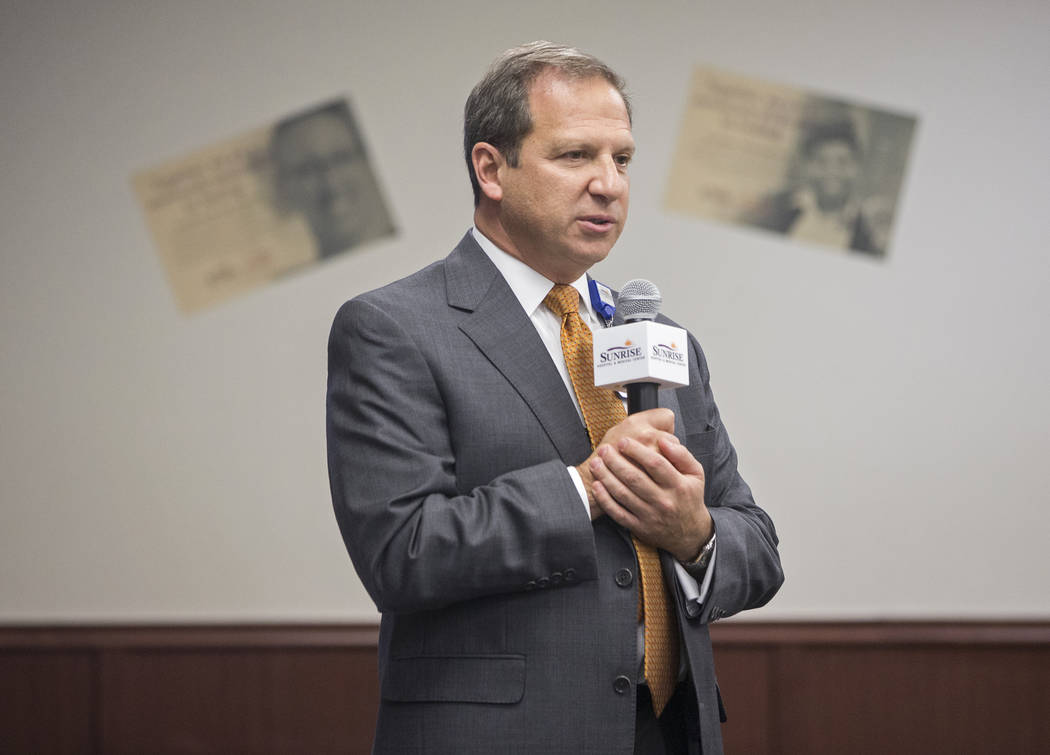 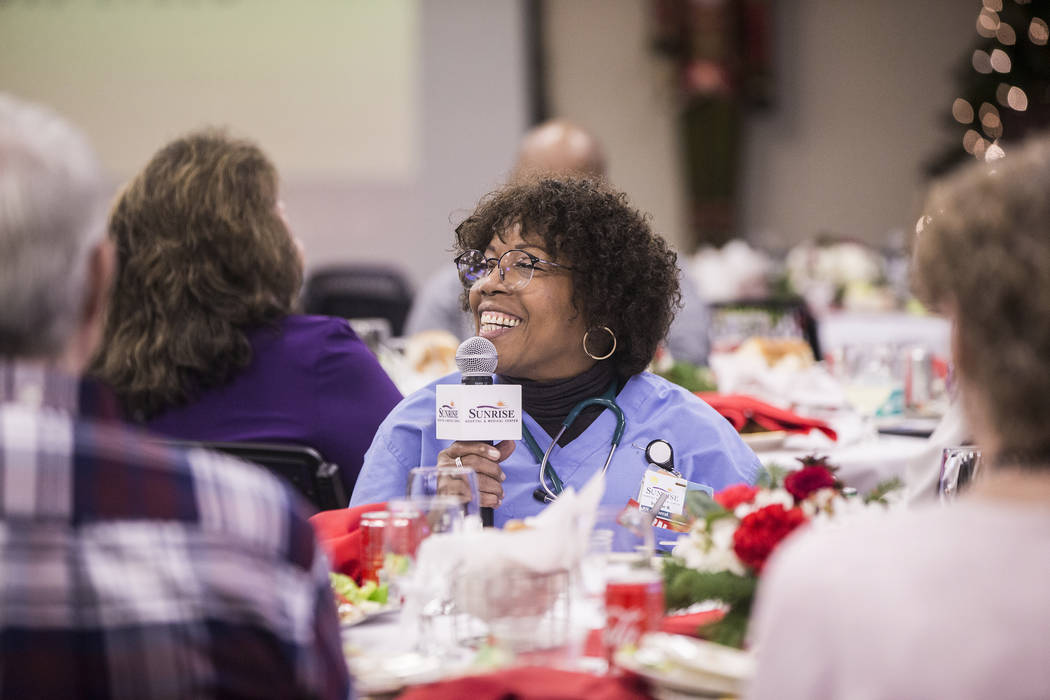 It took just $1.5 million and 18 months to forever change the face of health care in Las Vegas.

The relatively paltry investment led to the opening of Sunrise Hospital and Medical Center, a private, for-profit, 690-bed facility providing specialty and critical care services in Las Vegas, 60 years ago on Saturday.

What began as a 44,000-square-foot facility with 62 beds and a half-staffed emergency department catering largely to casino employees was instrumental in attracting clinical talent to Clark County. Sunrise today is the state’s largest acute-care facility.

Merv Adelson, owner of the Market Town Store chain, and casino owner Irwin Molasky came up with the idea to build a new private hospital to

compete with the county-run Southern Nevada Memorial Hospital (now University Medical Center) and four other hospitals in the Las Vegas Valley around 1956.

The men teamed up with Moe Dalitz, a mobster-turned-casino exec, and Allard Roen, managing director of the Desert Inn, to build a hospital on Maryland Parkway intended to invoke the luxuriousness of the Las Vegas Strip hotels, said UNLV occupational health historian Michelle Turk.

“It took a page from the Strip, offering all these significant perks,” including free golf club memberships, the best parking spaces and high-end housing to lure doctors to the state, said Turk, whose grandfather, trauma surgeon Kirk Cammack Jr., was among the first medical practitioners to take them up on the offer.

When it opened its doors on Dec. 14, 1958, Sunrise was “as modern as tomorrow,” according to an ad in the Las Vegas Review-Journal on the day of the hospital’s ribbon-cutting and open house ceremonies. An article called it “one of the major community developments in years.”

The founders had “spared no expense in obtaining the finest and most modern equipment for the hospital,” according to the Review-Journal article. The surgical unit was said to be one of the finest nationwide; the nurse’s stations were designed specifically for Sunrise Hospital.

The interior of the hospital was illuminated by soft fluorescent lighting rather than incandescent bulbs, each room had a television and patient call button, and individual thermostats controlled the temperature in each of the hospital’s three wings — all innovative features for the time.

‘Company hospital for the Strip’

Clark County was home to more than 100,000 residents and growing rapidly at the time . Just a decade earlier, only about 48,00 people resided in Clark County.

As the county grew, so did the need for medical services, UNLV historian Michael Green said.

“Here’s this growing population and there’s no hospital in the vicinity,” Green said. “It was important for convenience.”

Sunrise joined Southern Nevada Memorial Hospital and Boulder City Hospital, both of which were built in 1931; Rose de Lima, now a Dignity Health hospital, which was owned and operated by the Dominican Sisters of Adrian in Henderson at the time; and the now-defunct Las Vegas Hospital, which sat on Eighth Street and Ogden Avenue in downtownLas Vegas, Green said.

Sunrise offered a favorable alternative to the county hospital for the insured, Turk said. It also was the hospital where casino union workers went for their care, after the International Brotherhood of Teamsters invested in the facility and the Culinary Local 226 mandated that members receive their care there.

“It was basically a company hospital for the Strip during that time period,” she said.

For Marsha Phillips, 82, who was part of the original cadre of nurses who worked at the hospital even while it was being constructed, it was “kind of an adventure to open a new place with all new equipment.” Phillips, who recalled Sunrise’s early days in a recent phone interview from her home in Charlotte, North Carolina, was 22 at the time.

As the city grew, so did Sunrise. In 1965, the hospital opened its pediatric unit in its south tower. The city’s first intensive care unit opened at Sunrise in 1971, followed by the first neonatal ICU in 1974. A muscular dystrophy center, cancer treatment clinic and dialysis facility all opened in 1972.

The facility was purchased in 1969 by American Medicorp, Turk said, and later by Humana. Now, it’s owned by Nashville-based HCA Healthcare.

“After that, I think you start to see the corporatization of health care” in the valley, she said.

Medical advertisements, a new industry practice at the time, became commonplace. Gimmicks were another sign of the growing competition for patients, Turk said, with Sunrise leading the way with a Mediterranean cruise giveaway, a sweepstakes prize for patients who visited the hospital on Friday or Saturday, when the admission rate — and therefore, revenue — was lower.

“It seems so ridiculous to us, but they were really trying to get patients to go there,” she said.

The corporate shift cut back on the sense of familial camaraderie from the early years, said Pat Cochran, a licensed practical nurse who retired from Sunrise Hospital in 2013 after a 40-year career.

“Things changed,” she said. “We were short-staffed and we couldn’t really give the TLC that we should have.”

Better, but not enough

Through its growth, however, Sunrise Hospital became an important contributor to the availability of specialized health care in Nevada, Turk said. Today, the hospital is home to 1,400 clinicians across specialties including digestive health, neurology and cardiology.

It has the state’s only advanced comprehensive stroke center and the only pediatric open-heart program.

That growth has placed Sunrise alongside UMC as a reliable deliverer of complex care in the valley, Turk said.

“You really do have this longstanding history of these two hospitals really doing the best they can for the community,” she said.

Still the old saying that the best place for health care in Las Vegas is McCarran International Airport — where, presumably, a resident could hop on a plane to a bigger city to access quality care — isn’t entirely obsolete, Turk said.

“These two hospitals are not enough,” she said. “You need to have multiple academic medical centers in a community to really address the community’s needs.”