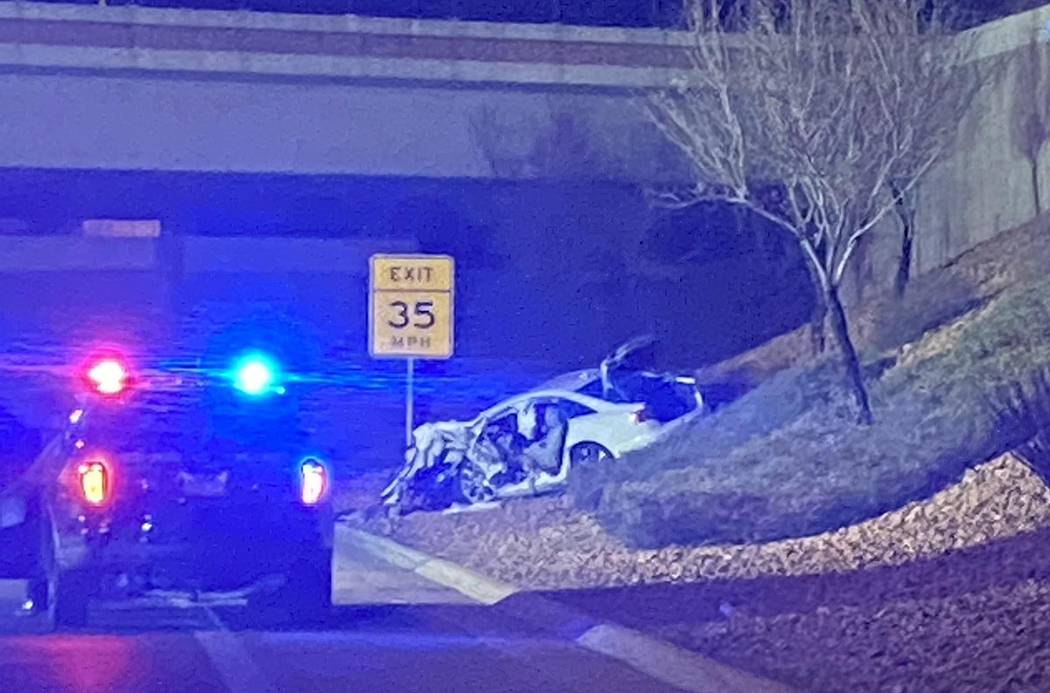 A man driving a white Audi was killed a crash on the Airport Connector near McCarran International Airport on Friday, Jan. 17, 2020, in Las Vegas. (Glenn Puit/Las Vegas Review-Journal) 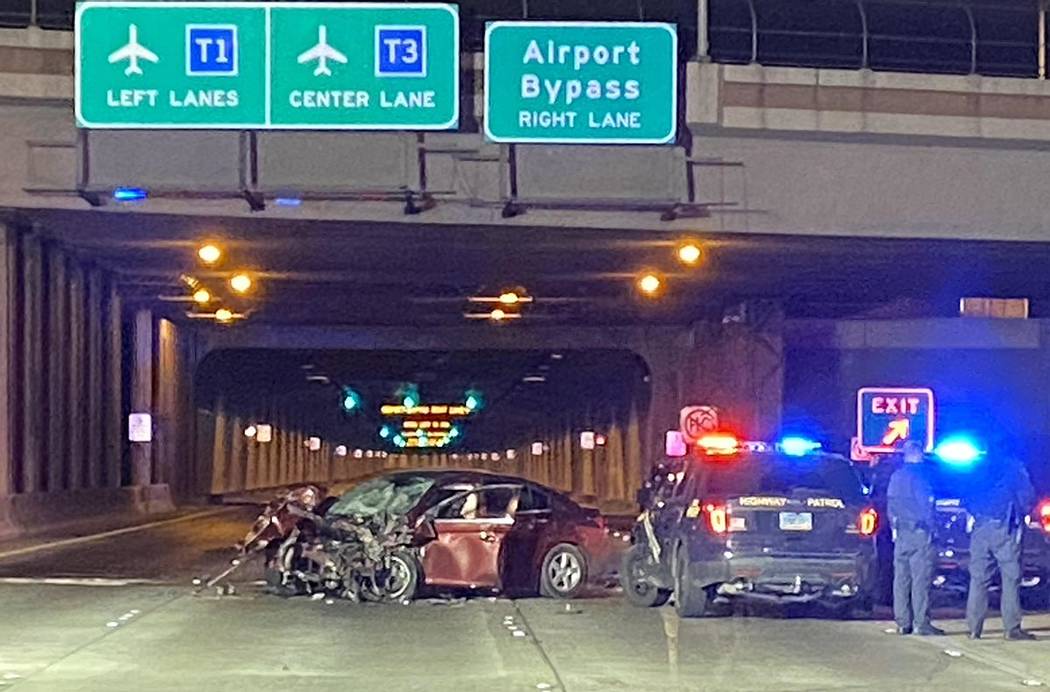 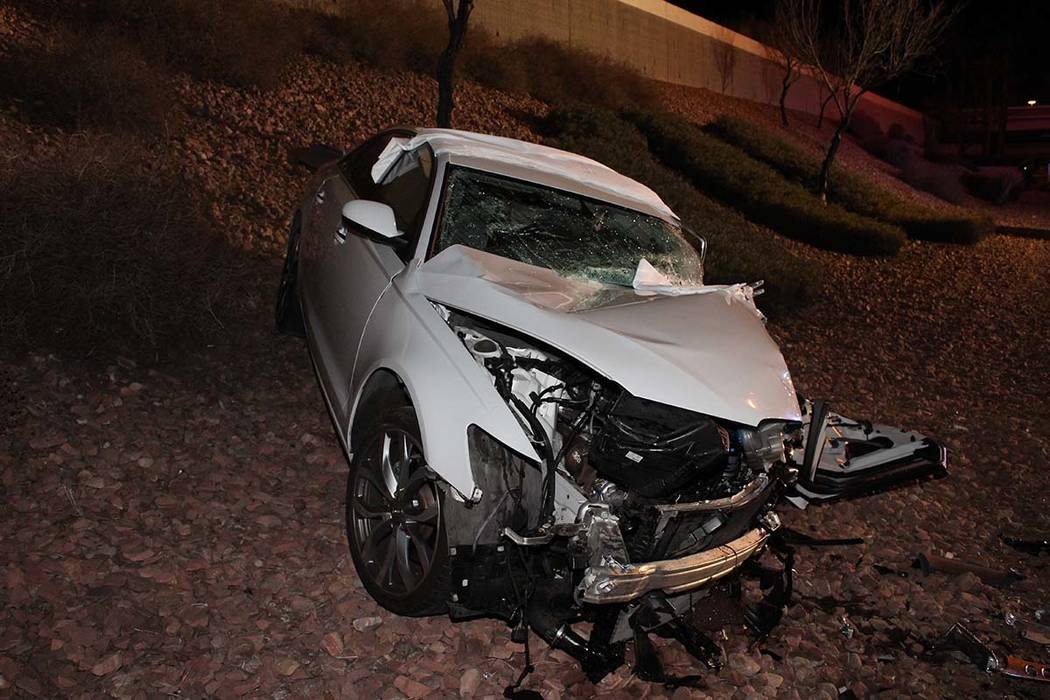 A man driving a white Audi was killed a crash on the Airport Connector near McCarran International Airport on Friday, Jan. 17, 2020, in Las Vegas. (Nevada Highway Patrol) 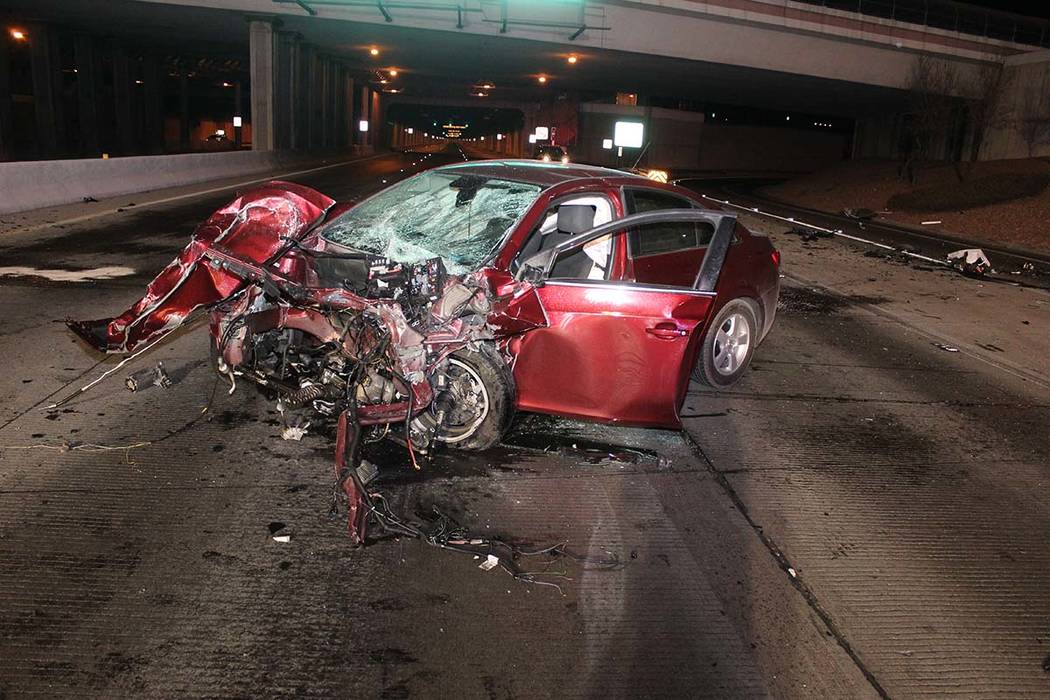 A Chevy Cruz was involved in a fatal, wrong-way crash on Paradise Road near McCarran International Airport on Friday, Jan. 17, 2020. Impairment by the driver of the Cruz is suspected, the Highway Patrol said. (Nevada Highway Patrol)

A white Audi and a Chevy Cruz are seen after a crash on the Airport Connector near McCarran International Airport on Friday, Jan. 17, 2020, in Las Vegas. A man driving a white Audi was killed in the crash.(Nevada Highway Patrol)

A wrong-way driver is facing a felony charge of DUI after causing a Friday morning crash that killed a 45-year-old Las Vegas man near McCarran International Airport.

The driver, identified by the Nevada Highway Patrol as 20-year-old Ciera Brawer, was arrested Friday on one count of DUI resulting in death. She will be booked into the Clark County Detention Center once she is released from the hospital.

According to trooper Travis Smaka, Brawer was driving a burgundy Chevrolet Cruze south in the northbound lanes of the airport connector tunnel, formally known as state Route 171, around 2:15 a.m., when she slammed into a white Audi, killing 45-year-old Christopher Garcia.

Update on wrong way crash: the airport beltway connector northbound is being reopened as I type this: pic.twitter.com/00NxVVhQMd

Just minutes before the wreck, the Highway Patrol had received a report of a wrong-way driver. Troopers encountered the crash scene two minutes later at the northbound entry to the tunnel. The airport connector was shut down for nearly five hours, reopening shortly before 7 a.m.

Brawer’s condition wasn’t known Friday afternoon, but authorities said she was conscious and talking while waiting to be taken to the hospital.

Friday’s wreck is the latest in a rash of fatal wrong-way crashes in Southern Nevada. Smaka said intoxicated drivers are a common theme in the recent spate.

— On Dec. 22, 41-year-old Roshonda Sawara Thornton was killed when her vehicle was struck by a suspected DUI wrong-way driver in the southbound lanes of the 215 Beltyway, near the Charleston Boulevard exit. The wrong-way driver, identified by the Highway Patrol as Ashley O’Neil, 26, was seriously injured. She has been charged with DUI resulting in death, DUI resulting in substantial bodily harm and driving the wrong way on a one-way road.

— On Dec. 21 police said a 23-year-old Las Vegas woman was driving the wrong way in the northbound lanes on I-15 near Jean when her vehicle hit a tractor trailer head-on. The Clark County coroner’s office later classified the woman’s death as a suicide.

— Two people were killed on Dec. 5 in a wrong-way crash on I-15, also near Jean. Authorities said motorist Frank Thomas, 42, of Jean, was driving while under the influence of alcohol when his vehicle – traveling north in the southbound lanes – struck a vehicle driven by John L. Camilo, of Valley Village, California. Both died at the scene. The Clark County Coroner’s Office said Thomas had a blood alcohol level of 0.22, nearly three times the legal limit of 0.08.

— On Dec. 3 at about 3:30 a.m. Frank Magliarditi, 39, of Henderson was driving south in the northbound lanes of I-15 near the Charleston Boulevard off-ramp when he collided head-on with an Amazon semitrailer. Magliarditi, of Henderson, was pronounced dead at the scene. The coroner’s office said Magliarditi had a blood alcohol level of 0.143 and tested positive for THC.

— An impaired driver, Ericka Avila, 27, was killed on Nov. 14 while driving the wrong way on Interstate 15, between Lake Mead Boulevard and Cheyenne Avenue. The Nevada Highway Patrol said the crash happened at 3:30 a.m. as Avila was driving the wrong way in the northbound lanes of I-15. Avila’s blood-alcohol content was 0.252, or more than three times the legal limit of 0.08, the coroner’s office said.