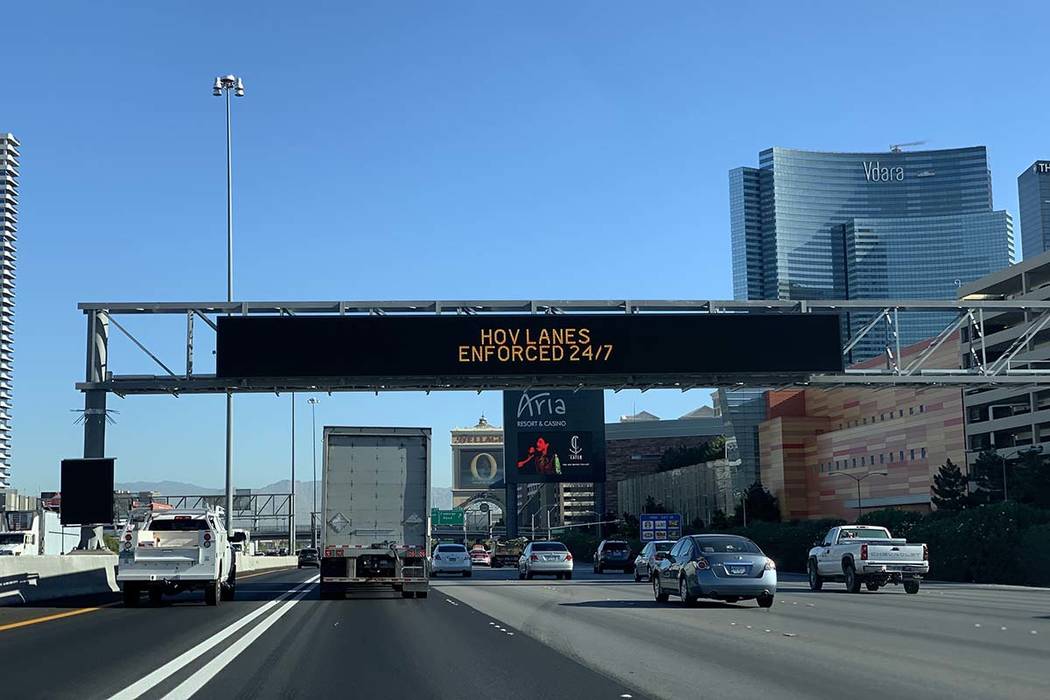 NDOT is in the process of testing out the full color dynamic messaging signs installed during Project Neon, a process that takes several months to complete. (Mick Akers/Las Vegas Review-Journal)

With Project Neon substantially complete, many motorists are wondering why the large dynamic messaging boards installed on Las Vegas freeways are not working.

Aside from an occasional message alerting motorists “HOV Lanes Enforced 24/7,” the 42 newly installed signs have yet to operate as promised by the Nevada Department of Transportation.

NDOT is testing the full-color signs, a process that involves several different aspects, according to spokeswoman Adrienne Packer.

“It is a long process that includes calibrations of flow meters, fiber optic cable testing, ramp meters, as well as testing of the message boards,” Packer said. “So far, we haven’t run into any serious issues in our testing.”

Ranging in sizes up to 13 feet tall by 77 feet wide, the advanced messaging signs line Interstate 15 from Silverado Ranch Boulevard to the Spaghetti Bowl, with a few on U.S. Highway 95 near the I-15 interchange.

The signs will be able to display real-time information, including which lanes are open and what lanes are affected by a crash, to give motors an advanced warning. Green arrows will be used to display an open, free-flowing lane, while a red arrow is used to alert drivers the lane is affected ahead.

The signs will feature digital speed limits, which can be adjusted to slow traffic down when needed to reduce the chances of secondary crashes after an accident.

Although some of the new signs don’t have the HOV message across their screens, testing is still being conducted, as visible messages are not required during the test phase, Packer said.

The testing involves computers communicating to all of the devices through a fiber optic cable.

“The boards were fully tested, with messages, colors, etc. at the factory, when they were delivered to Las Vegas, and again after install,” Packer said.

The signs must run glitch-free for 60 days before becoming fully operational.

“We are aiming to have the system fully operational by late fall, but that depends on the testing,” Packer said.

The sign activation is among other punch list work lingering after Project Neon’s significant completion was announced this month.

Landscaping and aesthetics work also are continuing and should be completed by Oct. 31, Packer said.