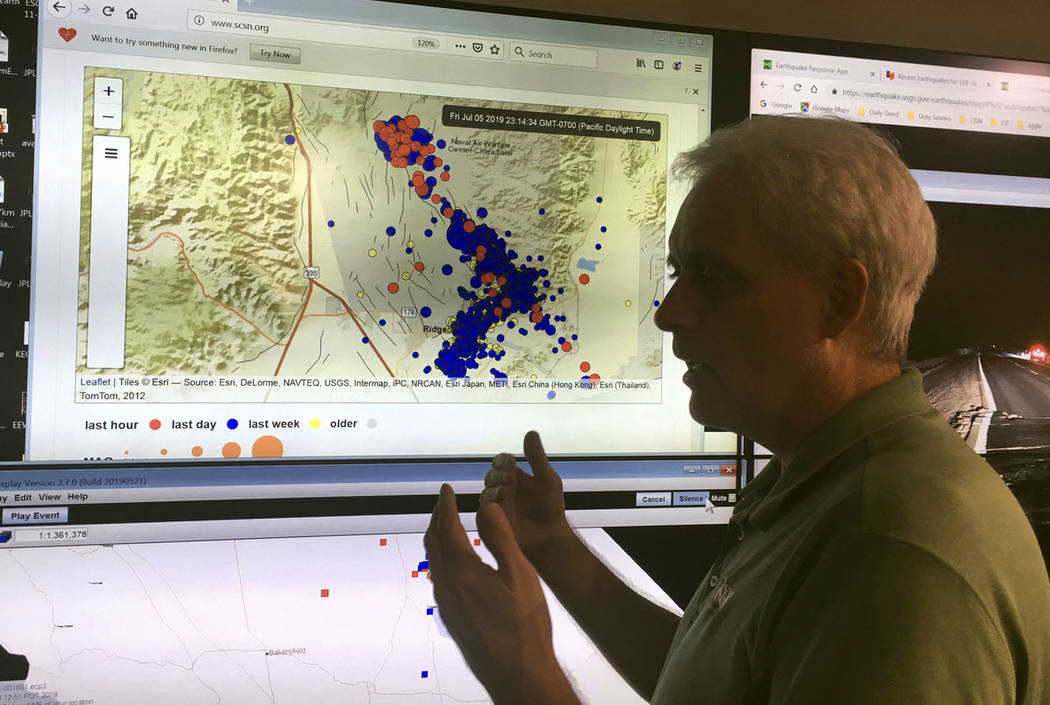 Robert Graves, a seismologist from the U.S. Geological Survey, stands in front of a display of earthquakes in Searles Valley during a news conference at the California Institute of Technology in Pasadena, Calif., Friday evening, July 5. (AP Photo/John Antczak)

Nevada faces a low potential of California’s 7.1 magnitude earthquake on Friday triggering a seismic event along one of its many fault lines, according to an earthquake expert.

The potential of a larger event being triggered is low in general, according to geophysicist John Bellini of the U.S. Geological Survey, but the distance between the activity that rattled Southern California and Nevada’s fault lines makes earthquakes here even less likely to be triggered.

“There’s always some mathematical chance it will have an effect and cause an earthquake,” but it is a very low chance, he said.

The shaking that sent light fixtures swinging and halted professional basketball games Friday night in Las Vegas is about the extent of what Southern Nevadans can expect to feel from the seismic activity that has shaken California since Thursday, Bellini said.

Las Vegas missed the brunt of the wave because of the shape of the fault, Bellini said.

“Because of the angle of the fault — it ran from southeast to northwest — the strongest effects are off the ends,” he said.

Las Vegas was about 150 miles away from the epicenter of Friday’s earthquake, and at that distance, the shaking in Southern Nevada generally won’t cause damage.

“The shaking or ground motion that one feels is a function of how far away you are from the epicenter for sure, but it also depends on what kind of rock or soil you are currently on,” said Nathan Niemi, a professor of geological sciences at the University of Michigan. “Las Vegas sits in a large basin. One effect of that is it can amplify the seismic waves, so you feel it more strongly than you would in a location in a different direction.”

Bellini said Southern California probably will face aftershocks for the next few weeks, but none is expected to extend to the Las Vegas Valley.

Nevada is one of the most seismically active states in the country, Bellini said.

Although the Las Vegas Valley is streaked with fault lines, the Carson City area is among the places in the state with the highest seismic hazard potential, according to a 2014 USGS map.

Fault lines exist on many major streets across the Las Vegas Valley, appropriately titled the West Charleston, Decatur, Valley View, Whitney Mesa, Cashman, and Eglington faults. And on the easternmost portion of the valley, the Frenchman Mountain Fault extends from Nellis Air Force Base to McCarran International Airport.

Earthquakes in and around Las Vegas and Nevada, while infrequent, have occurred throughout recent history.

“It’s been a while in the Basin range,” Niemi said. “In Nevada, eastern California and Utah, chances are we can expect earthquakes. We had one in the 1950s in north-central Nevada, a big one in 1983 in southern Idaho. A couple decades (between major quakes) is to be expected.”

Faults in Nevada have earthquakes less frequently than California or Alaska, but the magnitudes can be just as large, UNLV geology professor Wanda Taylor said.

Taylor said her team is trying to figure out which faults might be most hazardous to the Las Vegas Valley. It’s possible they are all equally hazardous, she said.

The biggest hazard is likely a fault in the Death Valley area that is capable of having a larger-magnitude earthquake than what is in the Las Vegas Valley, Taylor said.

But the likelihood of an earthquake in or around the Las Vegas Valley is still in question, Taylor said.

“That’s what we’re trying to do research on,” she said. 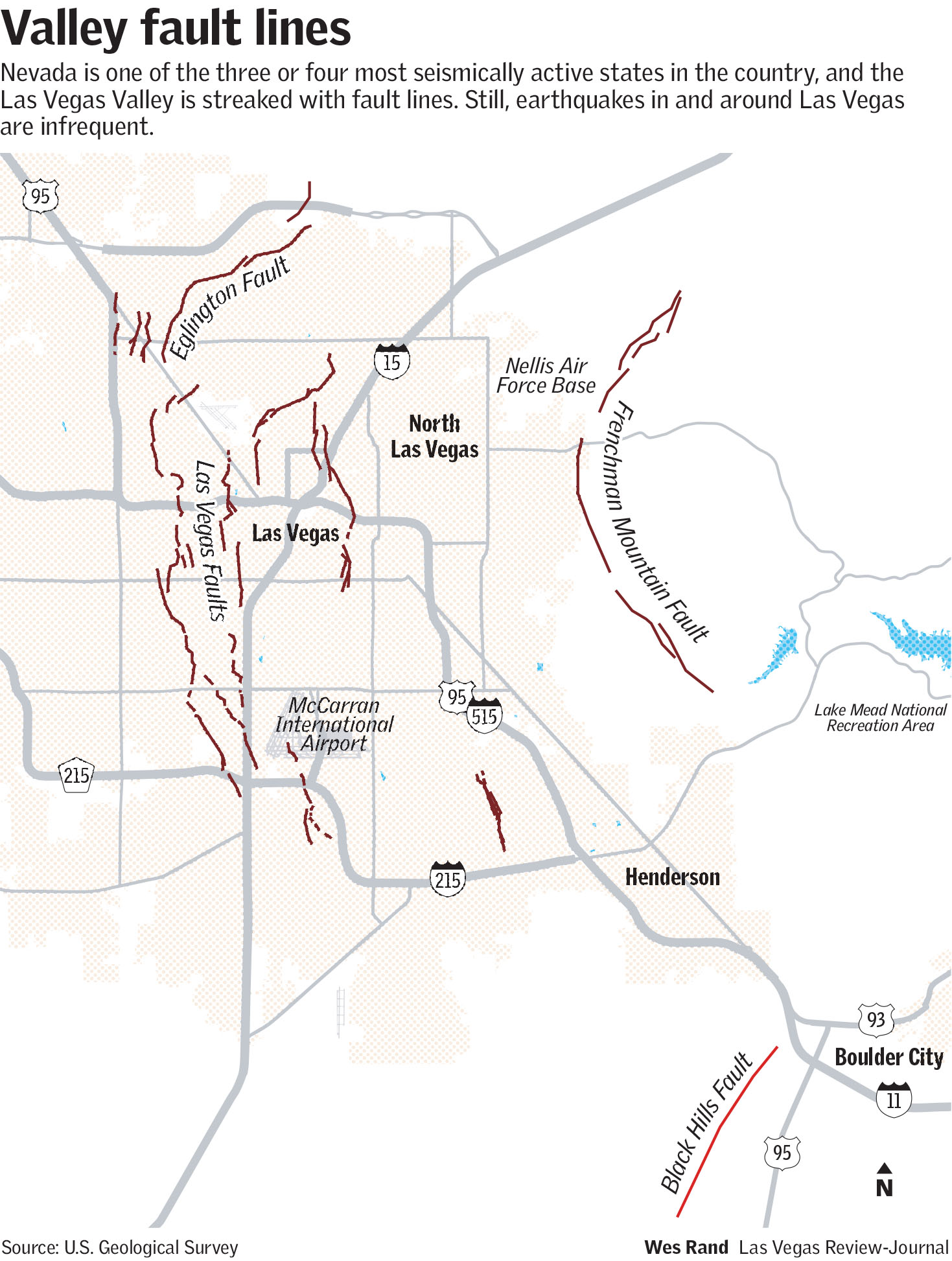 “Most of the faults in and around Las Vegas are on the order of 10 to 100 kilometers long,” Niemi said. “Even if one slips from one end to the other, it really can’t produce much larger than a 7 to a 7.5-magnitude in Nevada, Utah and eastern California.”

That doesn’t mean the effects wouldn’t be damaging.

“Where the earthquake happens is as big as how strong it is,” Niemi said.

Once the ground starts to shake, damage to surrounding areas becomes an engineering question, Taylor said. But building codes in Clark County were updated in the 1990s to improve seismic safety, she said.

“It’s not the same level as California, but it’s the next level below that,” she said.

But, she said, many resorts are built above code in terms of seismic safety.

A significant danger the valley would face is the potential for bridges and overpasses to collapse, she said. The Nevada Department of Transportation said roads and bridges are engineered with earthquakes in mind.

UNLV geology professor Gene Smith said there is no way of predicting when an earthquake will occur, but the odds of a devastating earthquake in Las Vegas are “astronomically low.”

“Las Vegas itself is a pretty safe place in comparison to Los Angeles or San Francisco or even Reno,” he said.