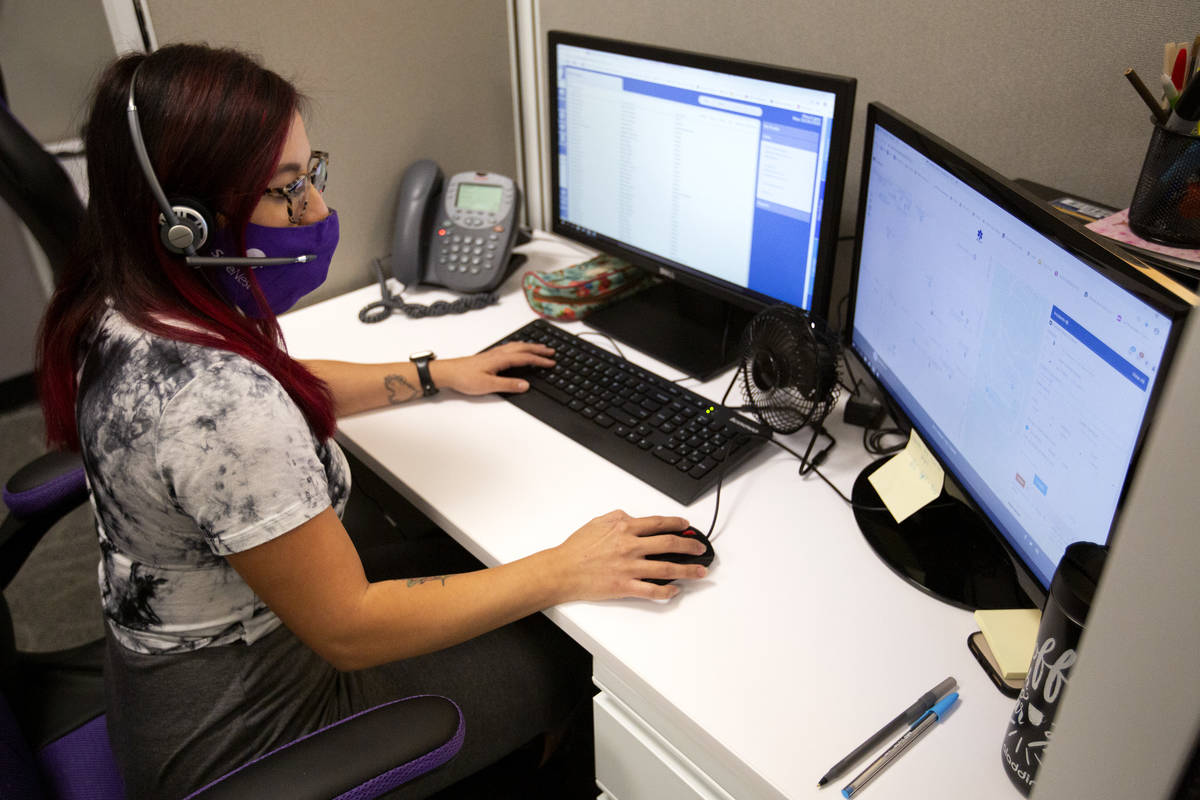 Alma Lopez, a crisis advocate at SafeNest, demonstrates their new dispatch technology on Monday, Oct. 26, 2020, in Las Vegas. SafeNest will use the technology in Project Safe 417, which has newly expanded 24/7 coverage. (Ellen Schmidt/Las Vegas Review-Journal) @ellenschmidttt 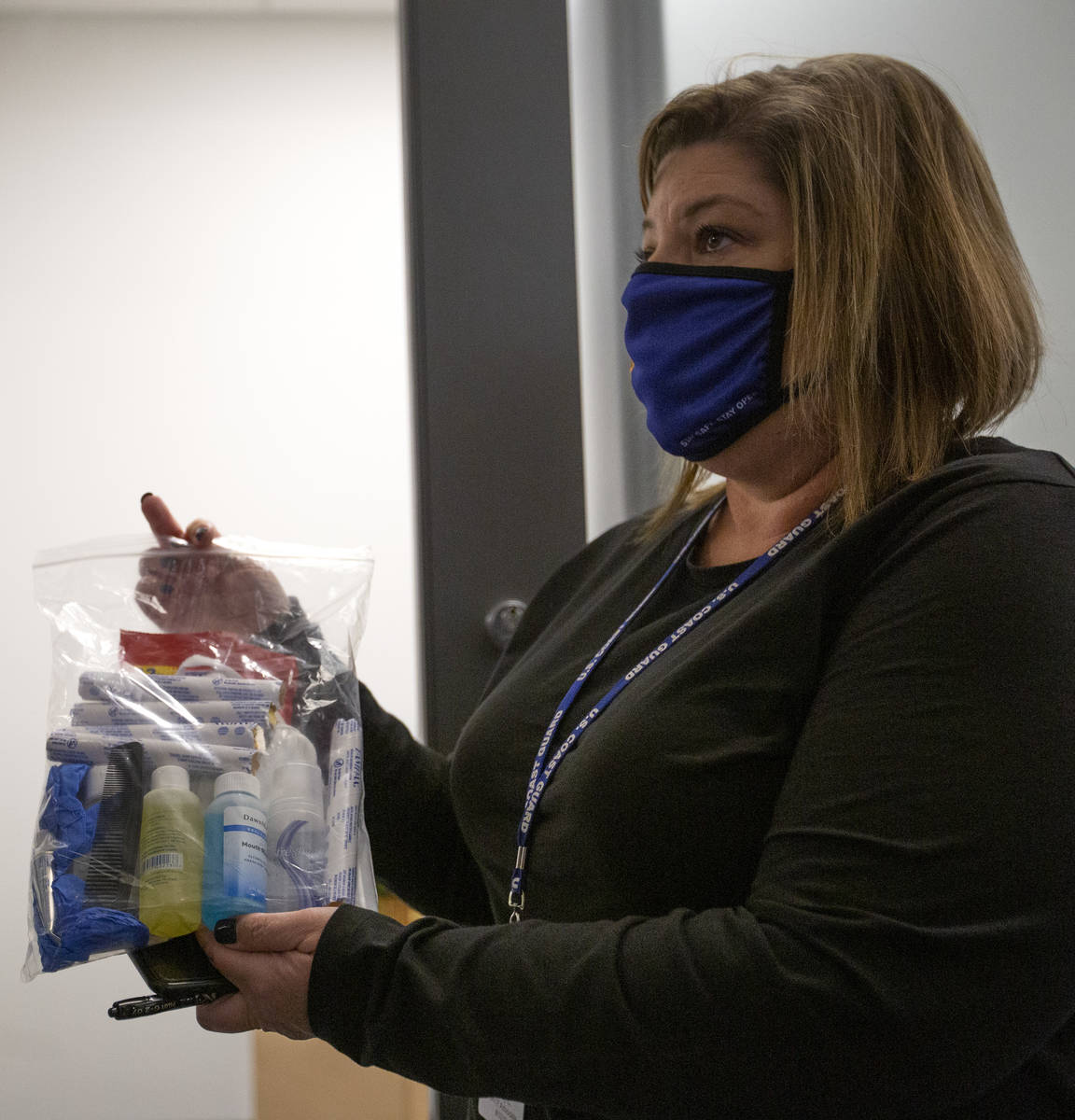 Brandi Carman, SafeNest director of dispatch, shows a hygeine kit that can be distributed to the victims they serve on Monday, Oct. 26, 2020, in Las Vegas. SafeNest expanded Project Safe 417 to 24/7 coverage. (Ellen Schmidt/Las Vegas Review-Journal) @ellenschmidttt 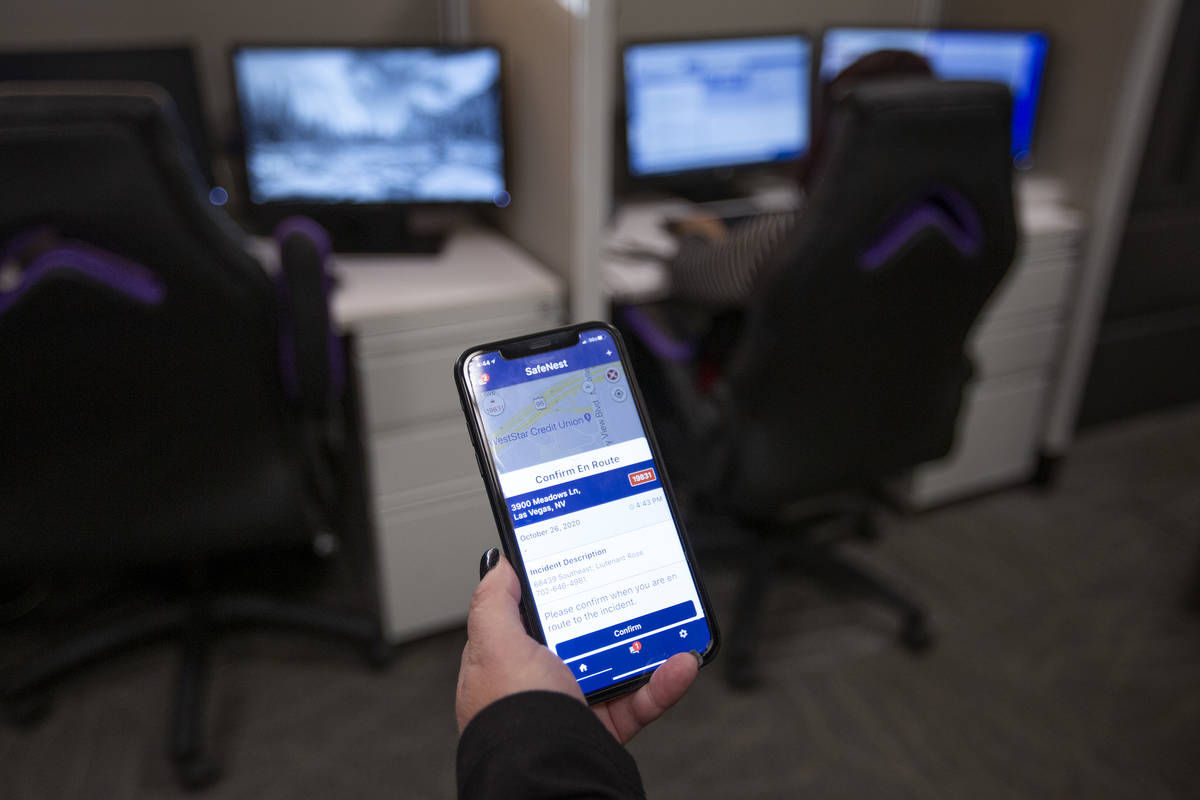 Project Safe 417, a program aimed at reducing domestic violence in Las Vegas, has expanded to 24/7 coverage — a move that was fast-tracked because of an uptick in domestic abuse calls during the COVID-19 pandemic.

The expansion was made possible by a $500,000 grant from Nevada Women’s Philanthropy awarded in May to SafeNest, Nevada’s largest nonprofit dedicated to ending domestic violence. At the time, SafeNest CEO Liz Ortenburger had estimated Project Safe 417, which uniquely pairs police officers with trained advocates to counsel victims in the crucial moments after a crisis, would shift to 24-hour coverage by March from its daily window of 5 p.m.-3 a.m.

Instead, energized by the award, Ortenburger got to work, and within two days of winning the grant, SafeNest posted job listings to grow its team of 17 advocates. Now, the charity consists of five full-time Project Safe employees and more than 50 volunteers, although that number is growing, according to SafeNest spokeswoman Laurie Cody.

“We knew that when COVID hit, given everything that we know about domestic violence, our numbers were going to skyrocket, so we started to lay all the groundwork and put our best foot forward on every single front,” Ortenburger said this week, when the Las Vegas Review-Journal was given an exclusive first look at the new technology powering the expanded coverage.

Project Safe, which was launched in December 2017 in partnership with the Metropolitan Police Department, was piloted in Metro’s northwest area command before its valleywide expansion in February. The project — named 417 for the Las Vegas police code for domestic violence — is the brainchild of Metro Lt. Timothy Hatchett, who did not respond Tuesday to a request for comment.

A month after the valleywide expansion, the novel coronavirus took hold of the nation. And, according to Clark County Sheriff Joe Lombardo, domestic violence calls in Las Vegas jumped at least 13 percent during the bulk of Nevada’s pandemic-triggered shutdown, which left many victims trapped at home with their abusers for nearly two months between March and April.

As the need for additional coverage became more apparent, Ortenburger knew that, in order to expand, she would need to figure out a way to streamline the communication between Metro’s 911 dispatchers and her advocates.

Before, a 911 dispatcher would call a SafeNest hotline call taker, who would then run down a list of advocates on duty to figure out who could respond the fastest. Next, the SafeNest dispatcher would text the advocate with an address and contact information for the officer or officers at the scene. From there, the SafeNest call taker would be in the dark about the status of the call until both the advocate and the police left the scene and the advocate was available to send an update.

Ortenburger searched “the depths of the internet” for a solution. She wanted the confidentiality and convenience of 911 dispatch software, but most systems can cost hundreds of thousands of dollars.

“In the nonprofit world, you have to figure out how to fill the gaps in with very little money,” Ortenburger said.

Finally, she stumbled across Trek Medics, which typically designs 911 dispatch software for developing countries but was “very excited” to customize a system for SafeNest — a first for Trek Medics, according to Ortenburger.

Now, with the new technology, when Metro’s dispatchers call SafeNest, a call taker will input information about a domestic violence call into a computer program. Elsewhere, the advocates, who might be at home waiting for a call or on the road, will receive an alert about the pending call on their cellphones through a mobile app built by Trek Medics.

The app allows advocates to assign themselves to a call and input updates that the hotline call takers can track from their computers, including when they arrive at a call, whether additional resources are needed and when the advocates leave a call. Project Safe’s average response time, now, is about 23 minutes, according to Cody.

By August, with the software up and running and training of SafeNest’s newest team members completed, the charity and Metro settled on a “soft launch” expansion in September, during which victim advocates were dispatched to 380 calls — up from 128 the month before.

October’s numbers are expected to surpass 500, according to Ortenburger.

“This is what community policing can look like,” she said. “We are doing exactly what society is asking for: give police the role they are good at, which is getting the scene safe, and then allow those of us with the expertise and the access to resources to work with the victims.”