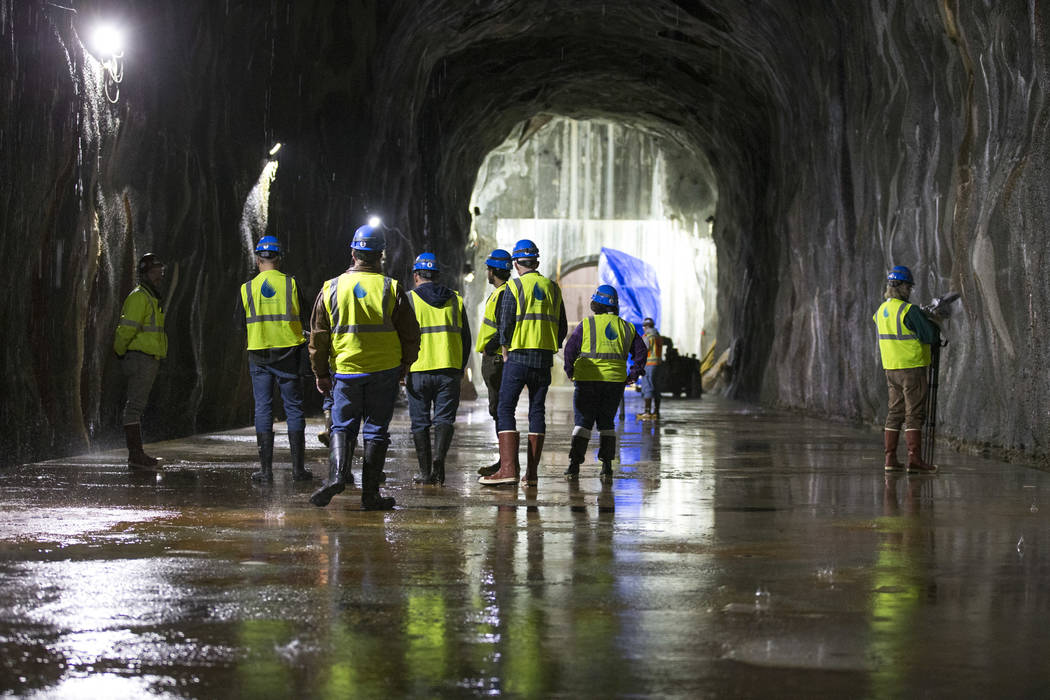 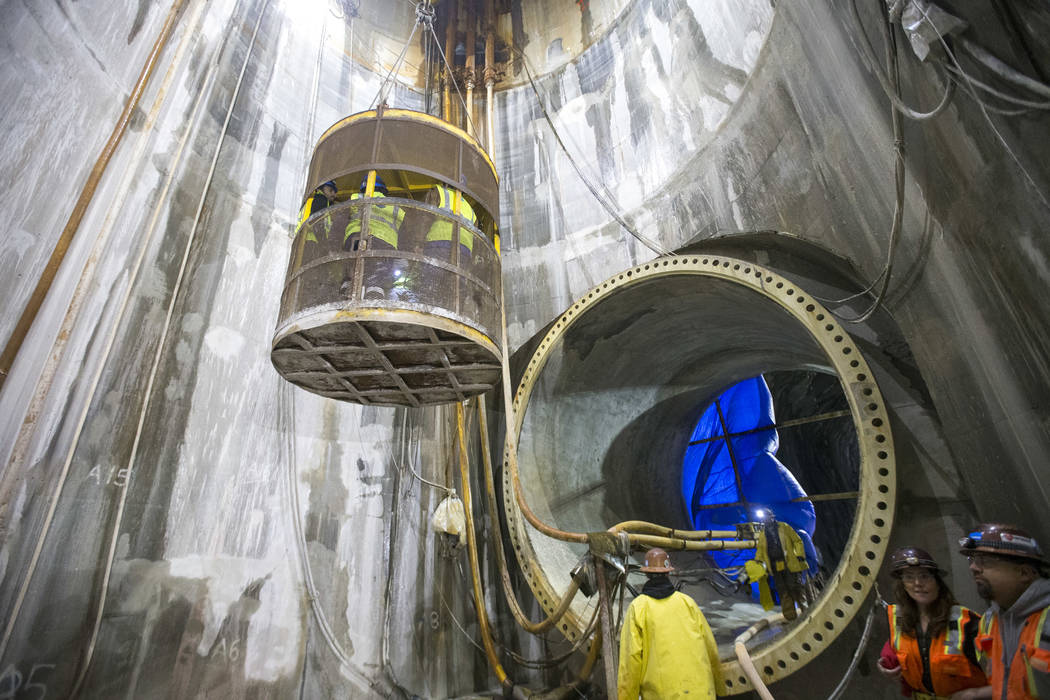 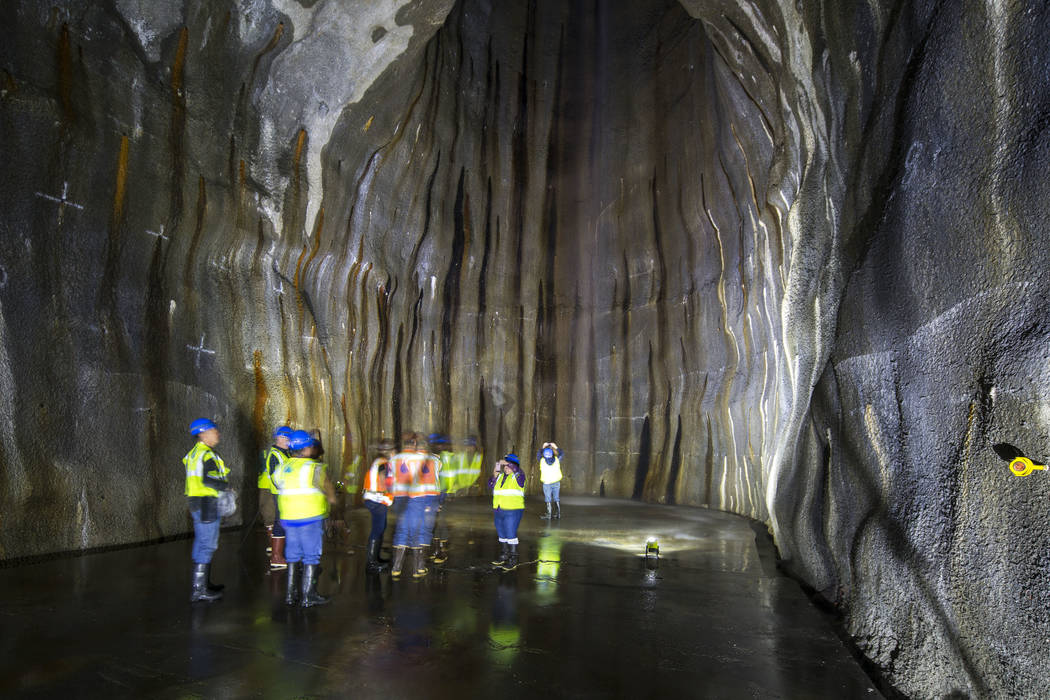 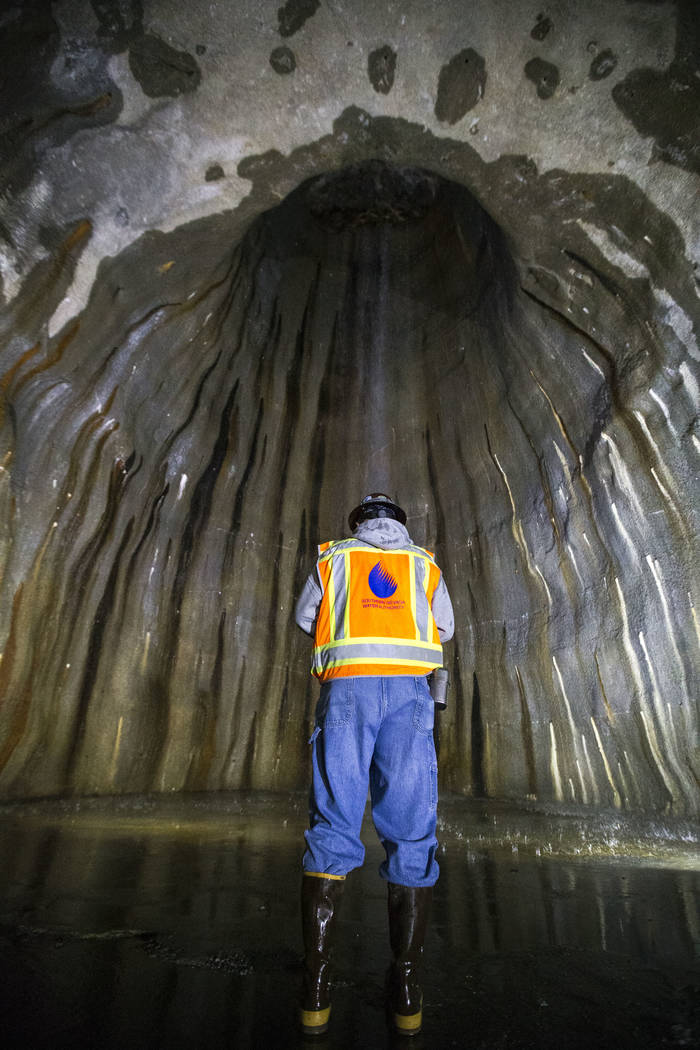 After a three-year battle to keep their underground job site from flooding, the construction crew at Lake Mead is ready to let the water win.

Sometime late next week, workers plan to shut off the pumps keeping the water out and allow it to fill the cavern they have carefully excavated more than 500 feet beneath the shore.

The move will mark the latest milestone for the Southern Nevada Water Authority’s low-lake-level pumping station, a $650 million safety net for a community that draws 90 percent of its drinking water from Lake Mead.

The pumping station, on track for completion in early 2020, will allow the authority to keep drawing water even if the reservoir shrinks 200 feet to “dead pool,” the point at which Hoover Dam can no longer can release water downstream.

“This project is drought-driven,” Erika Moonin, project manager for the authority, said Tuesday during a last media tour of the pump station’s underground forebay.

Water dripped from the ceiling and spouted from the walls as a small group of reporters and project officials walked to the far end of the chamber to stare up at a subterranean waterfall tumbling down from one of the two vertical shafts providing access to the construction zone.

The mix of lake water and groundwater, some of it thermally heated to a comfortable bath temperature, is flooding in from cracks in the surrounding rock.

The forebay is roughly 375 feet long and 35 feet wide with a 40-foot ceiling dotted with 34 openings, each leading 500 feet to the surface.

“I get cell service under shaft 19,” Robin Rockey, the authority’s liaison to the project, said with a laugh.

Right now, temporary pumps are removing about 525 gallons of water a minute from the work area. Once those pumps are off, the space should fill within three or four days.

Then a remote-controlled submarine will be sent in to unscrew the bolts from a massive bulkhead that separates the pumping station from the rest of the authority’s new plumbing at Lake Mead: a 3-mile, $817 million “straw” that was finished in 2015 and reaches to the bottom of the reservoir.

“There aren’t very many projects like this in the world,” said Jordan Hoover, project manager for Montana-based Barnard Construction Co., the general contractor for the pump station.

The completed facility will be able to draw up to 900 million gallons of water a day from the deepest part of Lake Mead using 32 specially designed submersible pumps that can produce up to 5,200 horsepower.

“In combination of depth and flow, they are the largest in the world,” Moonin said.

The pumps are manufactured in Spain and shipped to the Port of Long Beach, California, where they are loaded onto trucks for delivery to Southern Nevada. It takes four to five truckloads to deliver a single pump. The entire trip from factory to job site takes about a month, Hoover said.

Sixteen of the 32 pumps have been delivered so far. Moonin said the first of them should be installed sometime in February.

The construction crew is also hard at work on an electrical and maintenance building, a dedicated, 65-megawatt electrical substation and a pair of 12-foot-diameter pipes connecting the pumping station to the community’s two water treatment plants.

Hoover said his company currently has about 125 people working at the site 24 hours a day, five to six days a week.