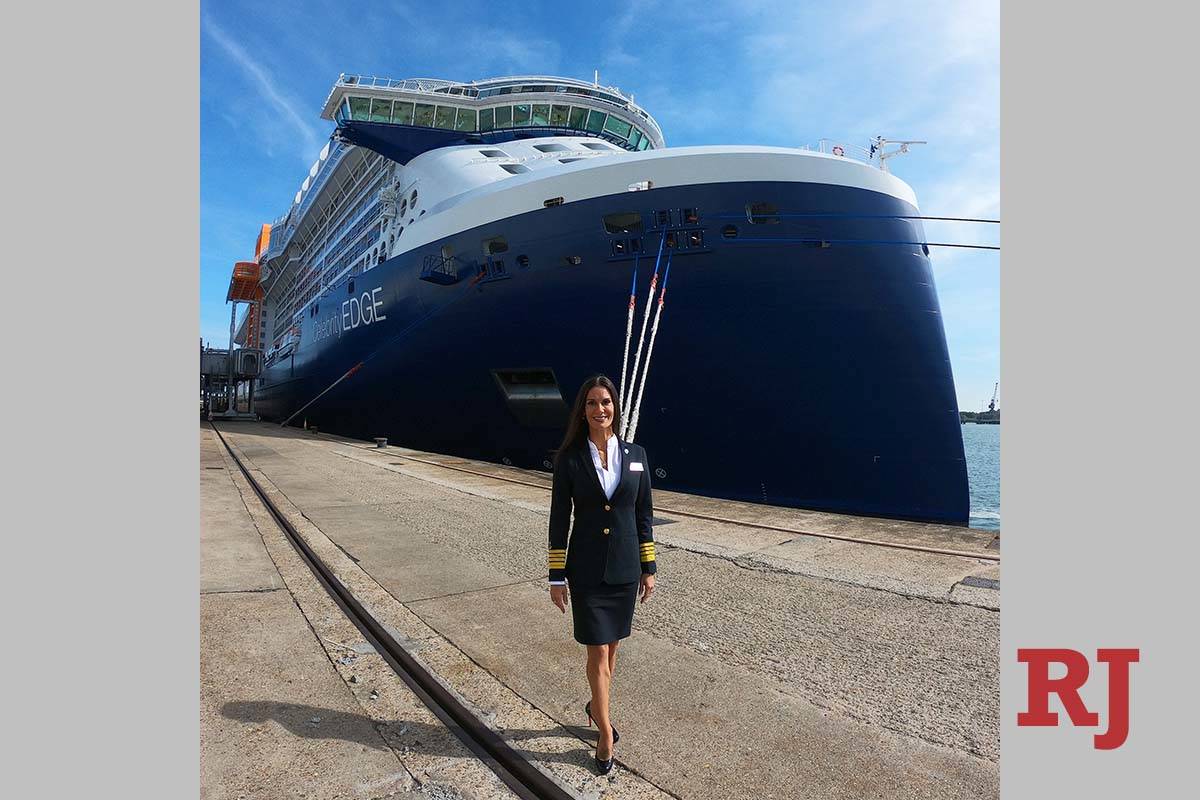 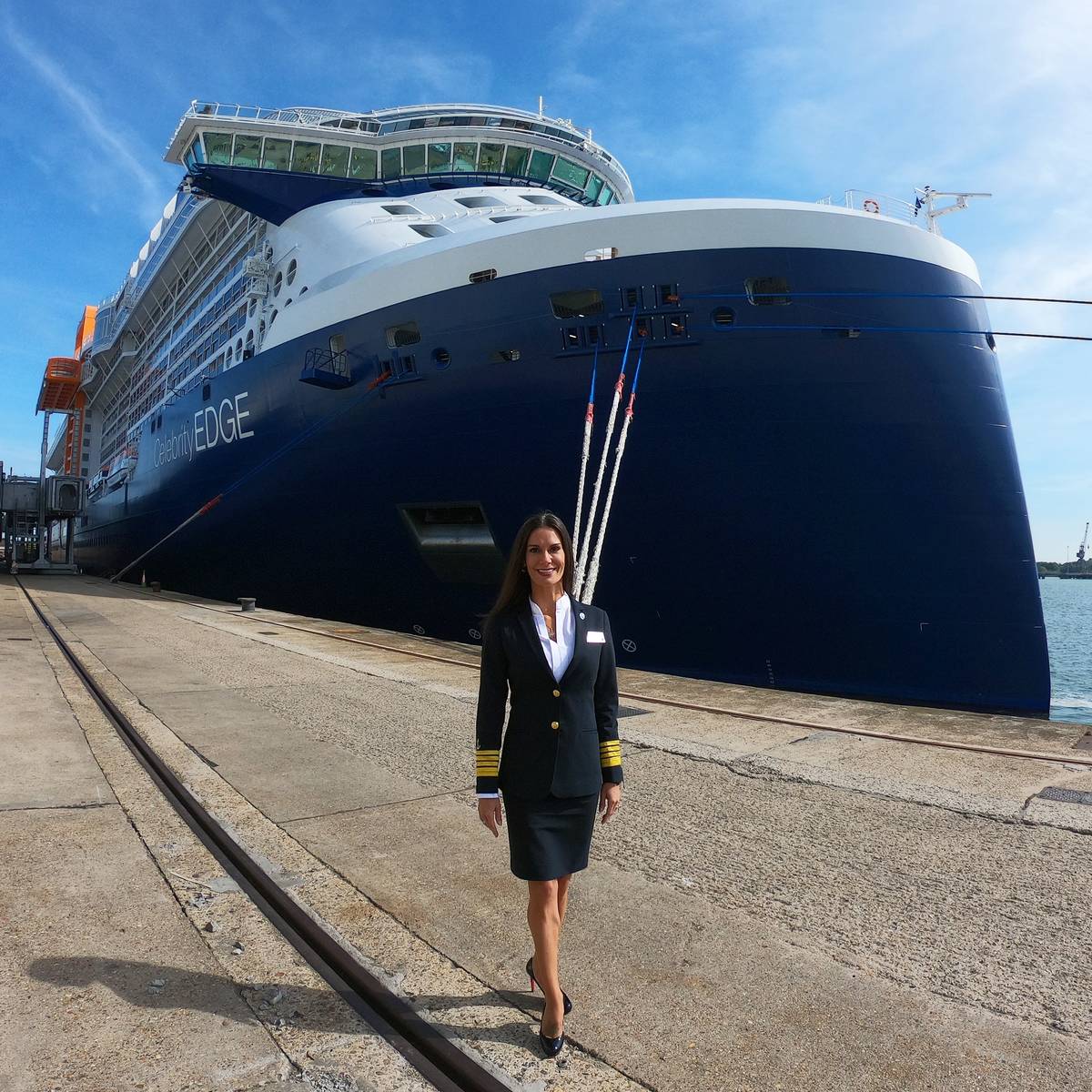 Kate McCue probably shouldn’t have been in there.

At the age of 12, she snuck into her parents’ bedroom and found a brochure for a cruise in the Bahamas. She persuaded her parents to take the family there on a vacation and spent a good amount of the four-day trip with the cruise director.

As she walked off the ship, she turned to her dad.

“I said to my dad, ‘I want to be the cruise director,’” McCue said. “And my dad said, ‘Well, you can do anything you want, including drive the thing.’”

In 2015, McCue made history when she became the first American woman to captain a cruise ship. It took nearly 15 years and a number of different positions, but McCue finally got the opportunity to “drive the thing.”

McCue, 43, now lives in Las Vegas. She discussed her career in a video interview with the Las Vegas Review-Journal from her ship, the Celebrity Edge, for Women’s History Month, which is celebrated each March.

She grew up in San Francisco and attended California State University Maritime Academy, after her dad reminded her about their conversation after the cruise. She studied to be a ship captain but had a hard time breaking into the industry after graduating.

McCue sent her resume to every company she could find but had nothing to show for it. Eventually she changed her resume and applied for a bartending job on a Disney cruise ship.

“Disney got my resume. They looked at it and said, ‘Well, she’s not qualified to serve a drink,’ because I’d never been a bartender in my life, ‘but she is qualified to drive our ships,’” she said. “They sent it over to the right people, and that’s how I got my foot in the door.”

Working her way up

She started as a third officer in 2001 and slowly worked her way up the ranks. She eventually moved to Royal Caribbean, where she became a staff captain — second in command behind the captain — before getting the call that Celebrity Cruises wanted to make her the first American woman to captain a cruise ship.

Her response when she got the phone call offering her the job? “Hell, yeah.”

It was a big deal, and she had to balance starting a new job with the pressures of consistent attention from media and passengers she met on board. She asked to trim down her media schedule, but she found that people she met on board often asked her the same questions, and she wanted people to know her story.

“I realized that if I don’t use the platform to my benefit, then the next woman that comes up into this position, she’s going to have to go through the same thing and answer the same questions,” she said.

McCue said she wanted to seize the opportunity to show that “being a female captain is just being a captain.”

Throughout her career and especially after she became a captain, McCue has made it a priority to work with others trying to gain a foothold in the industry. She also acts as a mentor for many crew members.

Elizabeth Marami has worked with Celebrity Cruises since July, much of it with McCue as her captain. Marami, who serves as the second officer, said she’s already learned a lot from McCue.

“Even when you think you are not so good at something, she will be very patient with you and guide you through it,” she said. “I came here not knowing much, but I’ve grown so much in the past seven months. I really would say she’s also a very empathetic, compassionate leader.”

Theoderos Agkas, the staff captain on board, has worked with McCue for about five years. He echoed Marami in pointing out how approachable McCue is as a leader.

“I admire her positiveness and her calmness in every situation, as well as her coaching skills to help individuals, especially the bridge team members,” he said.

For now, McCue is ready to welcome back passengers to the Celebrity Edge, but she’s keeping busy sailing near the Bahamas. There are more ships than port space, so during the pandemic many cruise ships are still staffed and anchored in the open water. Her ship has 127 people on board, a far cry from the nearly 5,000 it usually carries.

In reflecting on her career, McCue has a quick answer for the most memorable situation.

In 2015, she got a call from the bridge telling her about a potential mayday call on the radio. She rushed up and maneuvered the ship to find a sailing boat that had been badly damaged in a storm and was rapidly taking on water. Together with the rest of the crew, she helped rescue the six people stranded on board, including two pregnant women.

“They had met at 10 in the morning and said, ‘If no one comes by, we’re going to have to jump into the sea because we can’t go down with our sailing boat,’” she said. “And we came along at 10:45 that morning.”

And last March, just before the pandemic shut down the industry, McCue was again a major part of a historic moment. She captained a ship with the first all-female crew in maritime history. The crew was made up of women from more than a dozen countries, and McCue said she was honored to be a part of it.

The only major criticism McCue has received over her career? She smiles too much.

“When you’ve wanted something so bad, since you were 12 years old, and your dreams have finally come true, you can’t help but smile,” she said.