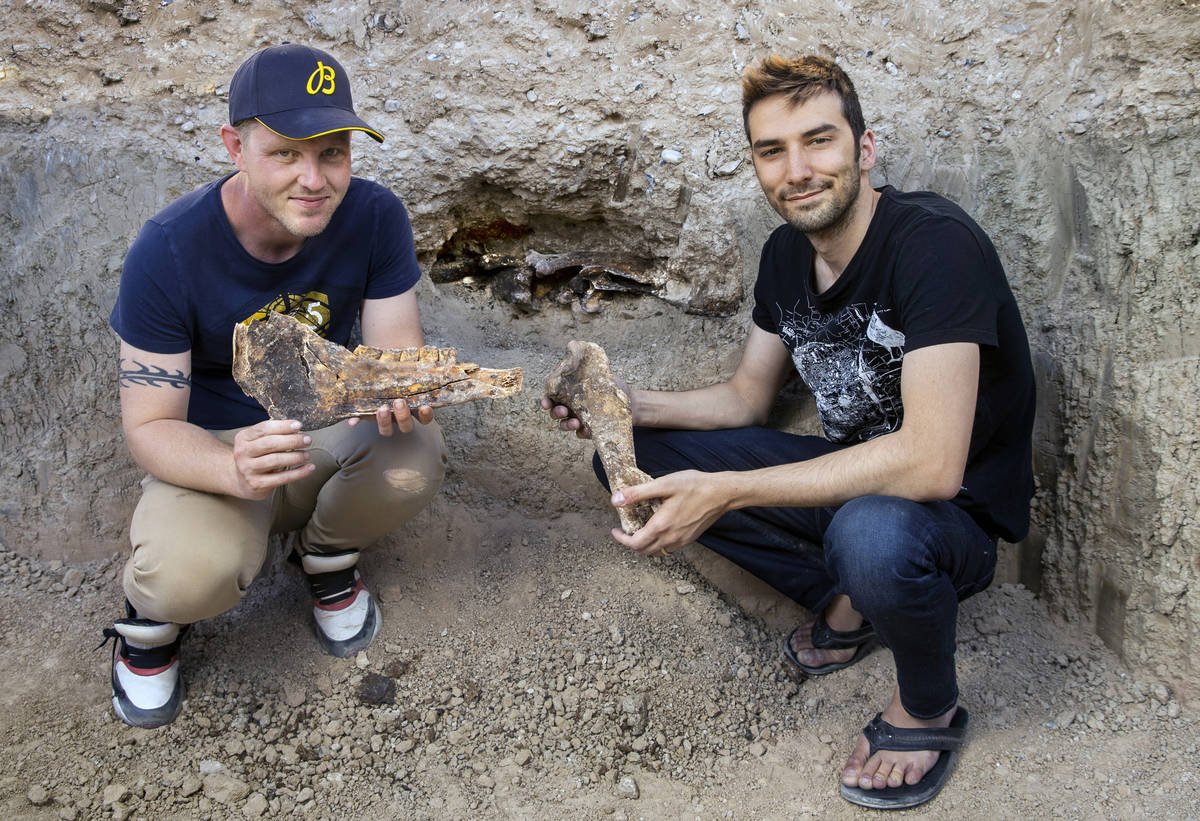 Matt Perkins, left, and Josh Anghel hold what may be bones from a horse that died 6,000 to 9,000 years ago, Wednesday, April 28, 2021 in Las Vegas. The bones were found in their backyard as a pool was being dug. (L.E. Baskow/Las Vegas Review-Journal) @Left_Eye_Images 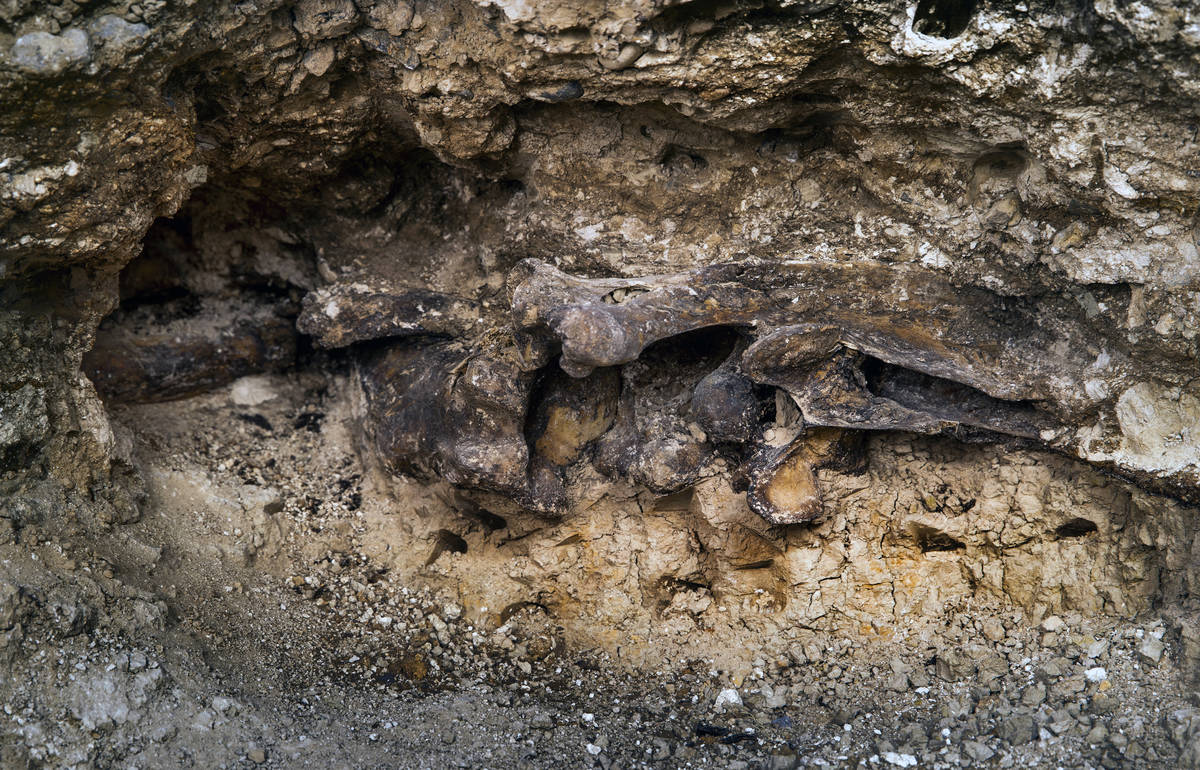 Bones that may be from a horse that died 6,000 to 9,000 years were found in the backyard of Matt Perkins and Josh Anghel as a pool was being dug, Wednesday, April 28, 2021, in Las Vegas. (L.E. Baskow/Las Vegas Review-Journal) @Left_Eye_Images 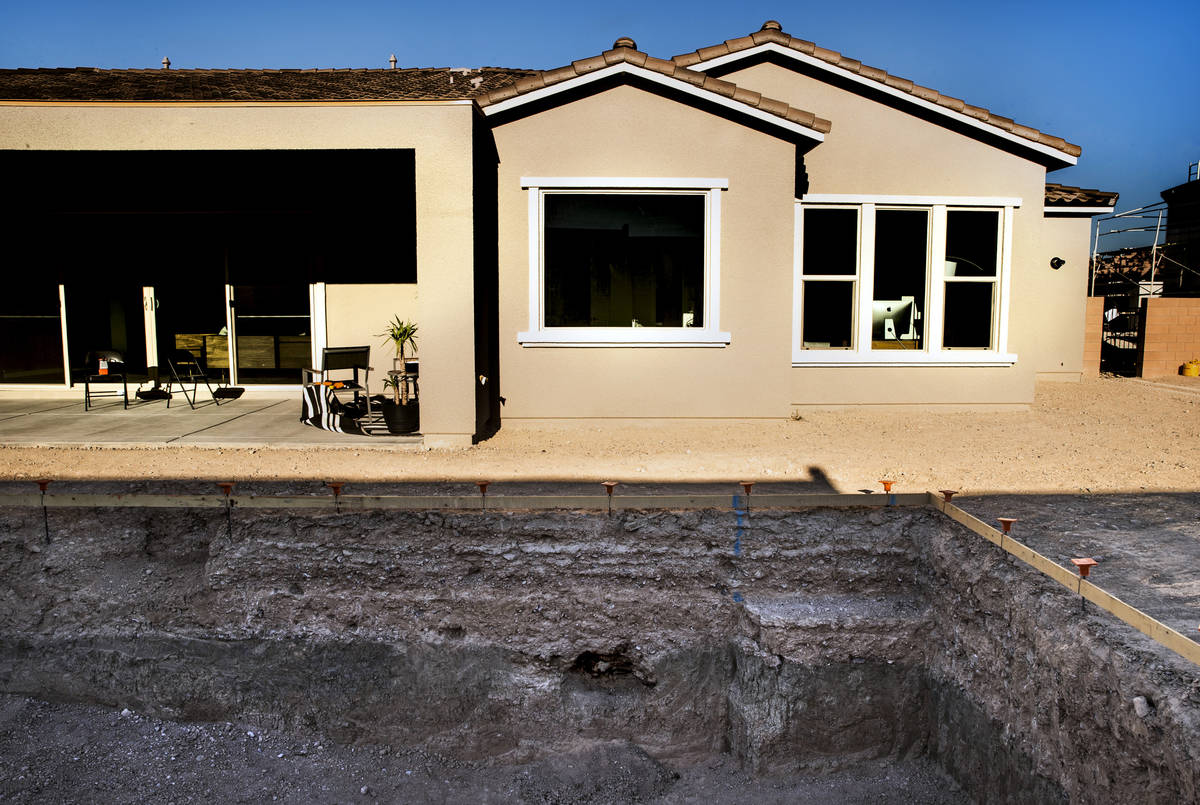 A hole on the side of Matt Perkins and Josh Anghel's home reveals possible horse bones from 6,000 to 9,000 years ago, Wednesday, April 28, 2021, in Las Vegas. (L.E. Baskow/Las Vegas Review-Journal) @Left_Eye_Images 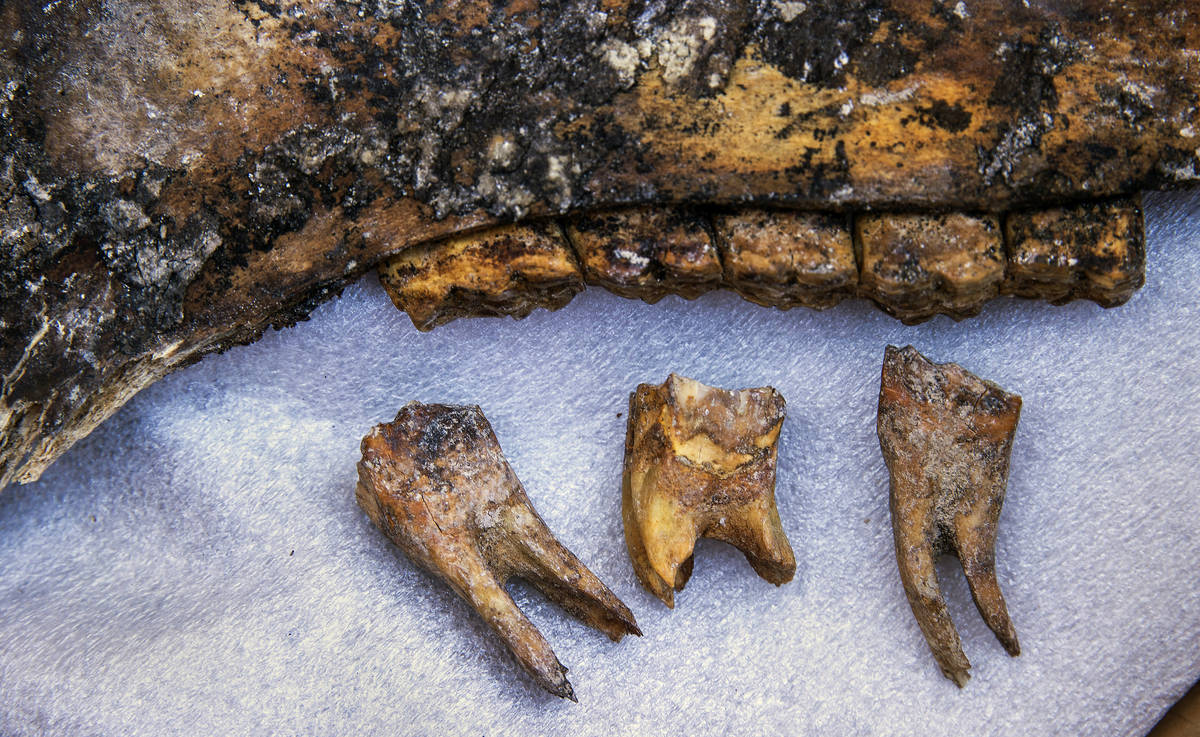 Possible horse jaw and teeth from 6,000 to 9,000 years ago were found in the backyard of Matt Perkins and Josh Anghel, Wednesday, April 28, 2021, in Las Vegas. (L.E. Baskow/Las Vegas Review-Journal) @Left_Eye_Images 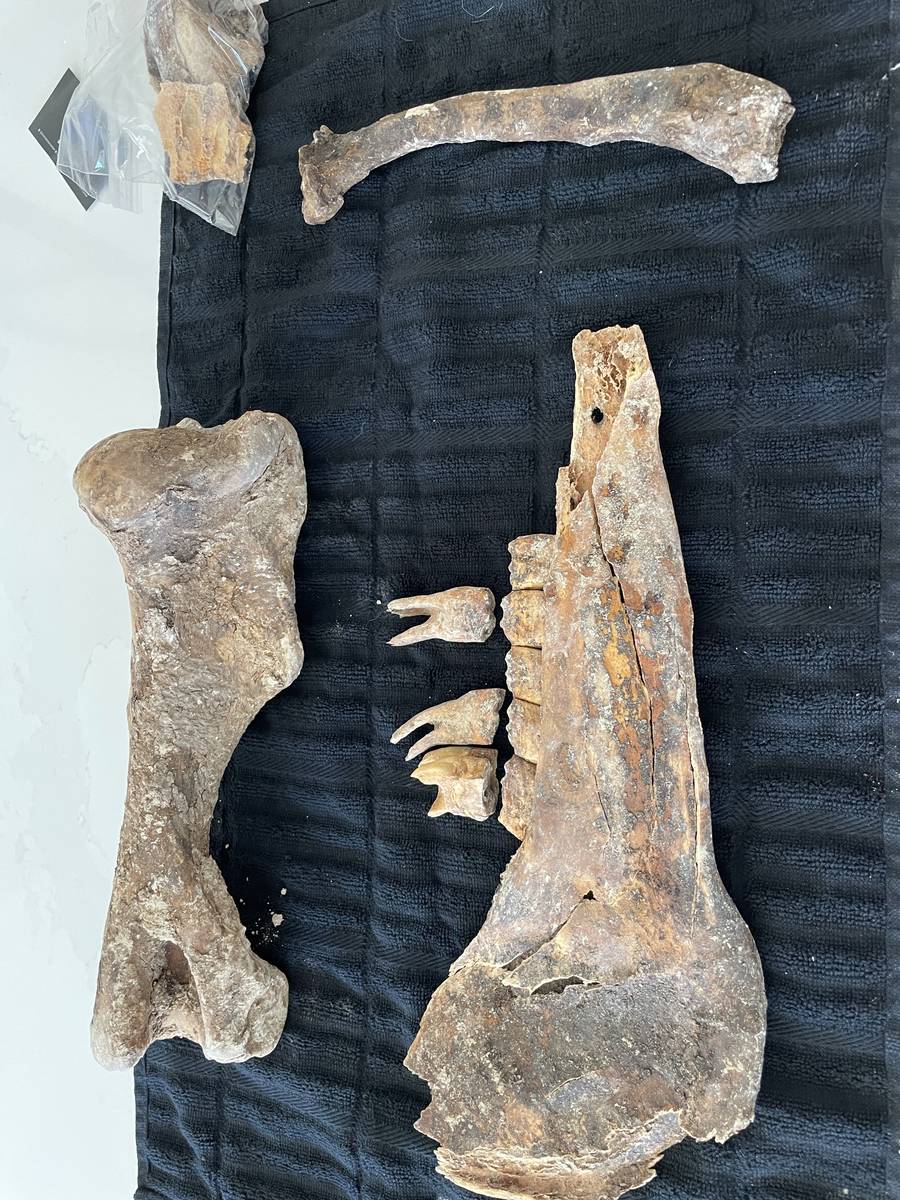 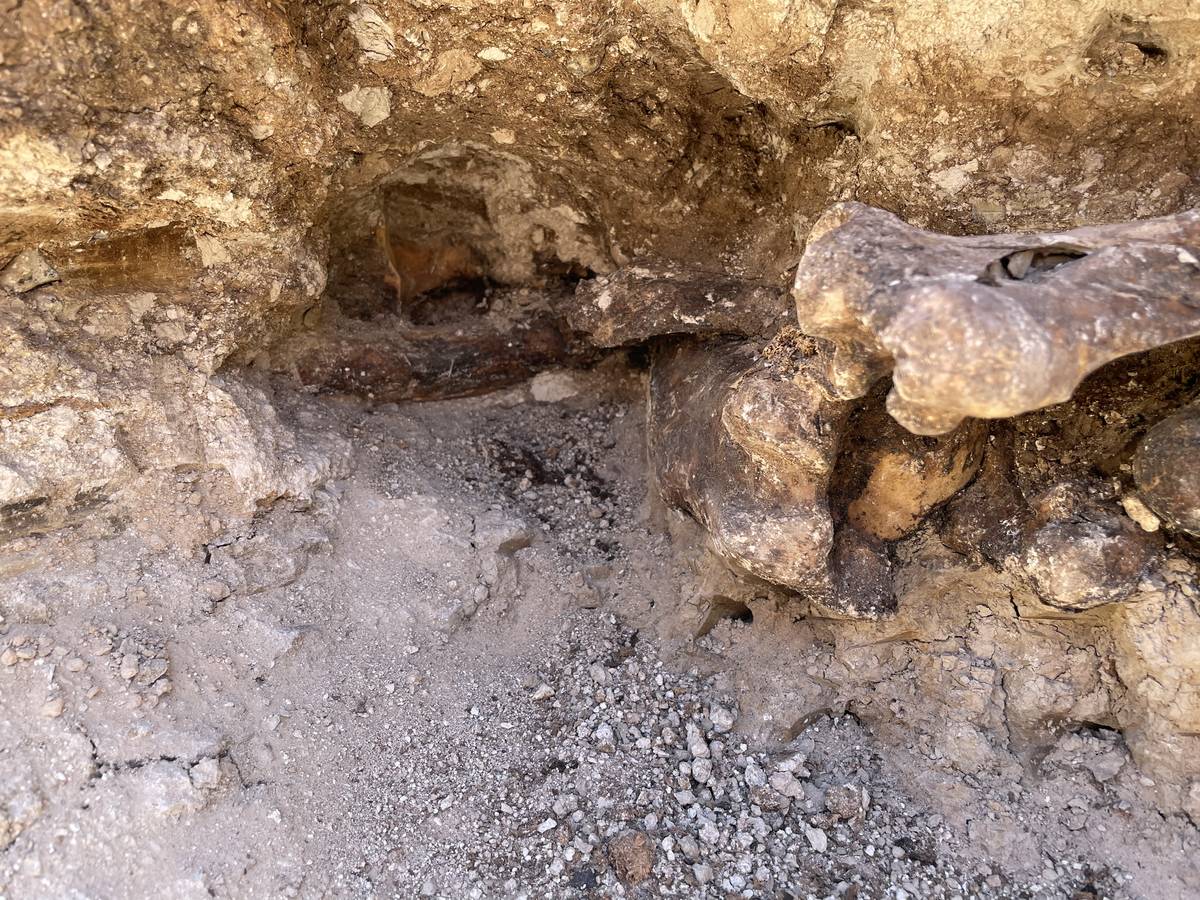 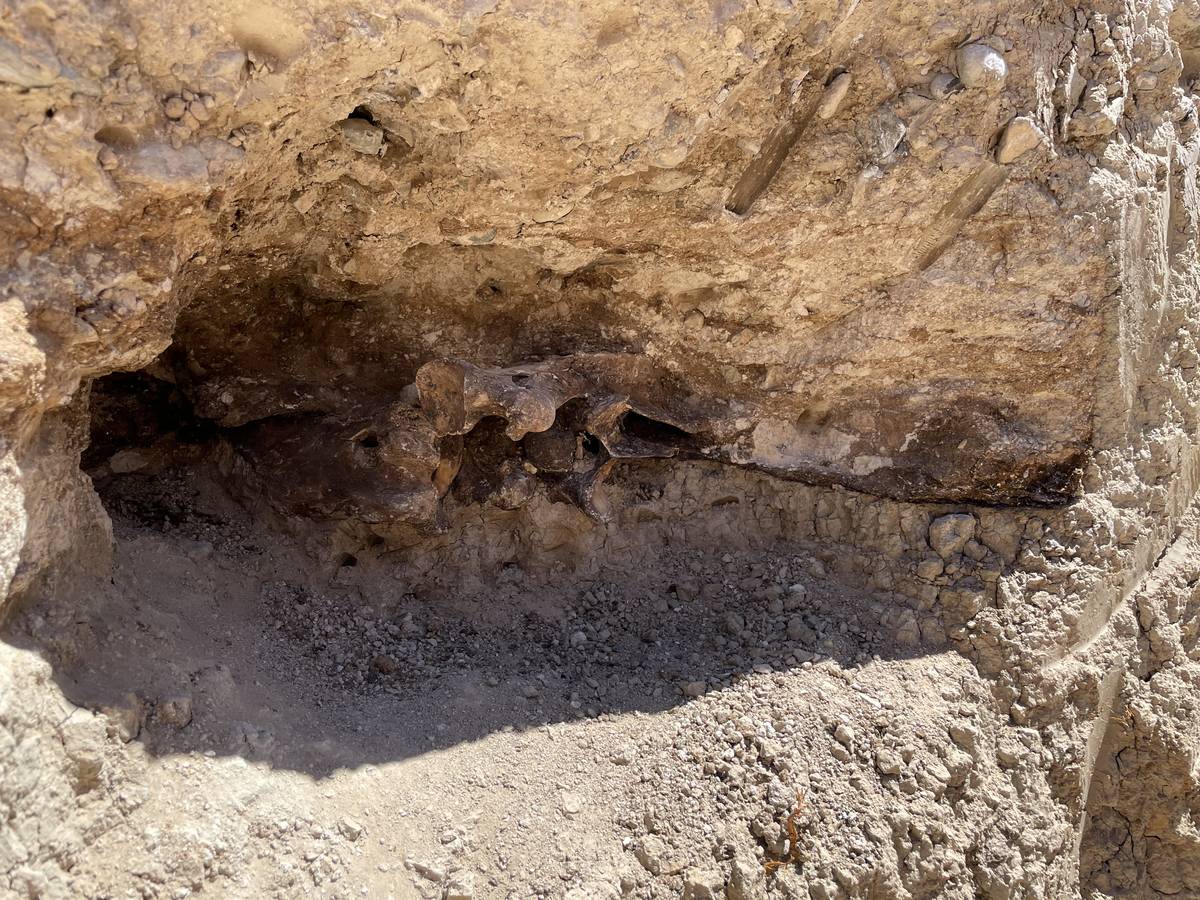 Workers found an animal skeleton dating back thousands of years Monday while digging a couple’s pool at their northwest Las Vegas home.

The bones were found in an area of soil that is at most 14,000 years old, said Nevada Science Center Director of Research Joshua Bonde, who believes the bones are from a horse that died 6,000 to 9,000 years ago.

“It was an actual skeleton,” Bonde said. “The bones were in the leg position attached to one another, which is actually really rare preservation for that area.”

Matthew Perkins said he and his husband woke up Monday morning to see Metropolitan Police Department officers in his backyard with the workers hired to build a pool at their house near Grand Teton and Buffalo drives.

“It kind of freaked us out,” Perkins said of the officers inspecting the bones, until police determined the skeleton was too large to belong to a human.

Officers wanted to throw the bones away, and the pool contractor wanted to build over them, but Perkins said he and his husband are working with Bonde to determine if the skeleton can be extracted.

Some of the bones, including a piece of skull and spine, have already been removed from the backyard, but the rest of the skeleton may be under the home’s foundation.

Bonde, who is a paleontologist, said to be considered a fossil the bones would have to be at least 10,000 years old. Scientists would need to use carbon dating to figure out if the bones qualify.

The bones are probably from the planet’s last ice age, when much of the Las Vegas Valley was wetlands, Bonde said. Bones of similar animals, such as camels and bison, have been found in the northwest valley.

Perkins lives about 3 miles from Tule Springs Fossil Beds National Monument, where hundreds of fossils from the last ice age have been found. Despite their proximity to the fossil beds, it’s unusual for homeowners to find bones on their property, Bonde said.

“It’s actually surprisingly rare given the amount of development that’s happening up there, just because they are so close to the fossil beds,” Bonde said. “But it should become more common as more and more excavations occur.”

Bonde said if homeowners near the fossil beds find bones that are clearly from an animal, they can contact the Nevada Science Center at 702-769-8707 or info@nvscicenter.org.