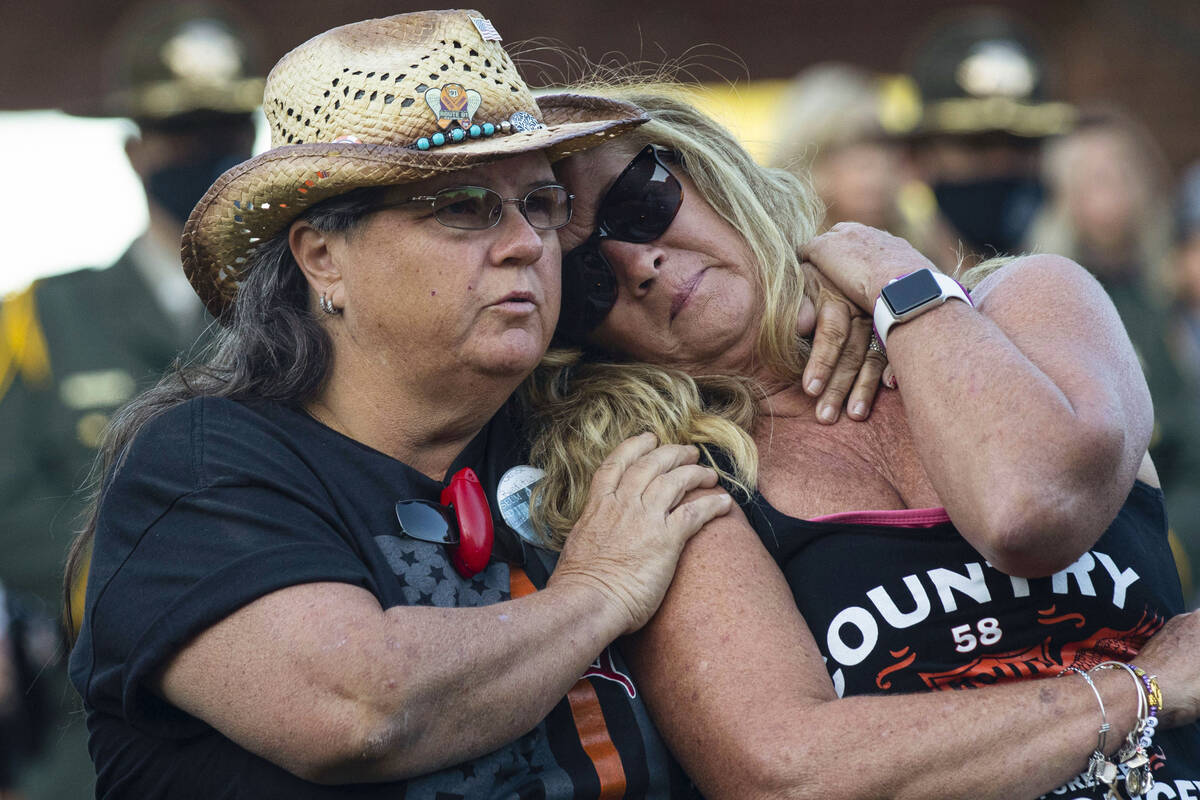 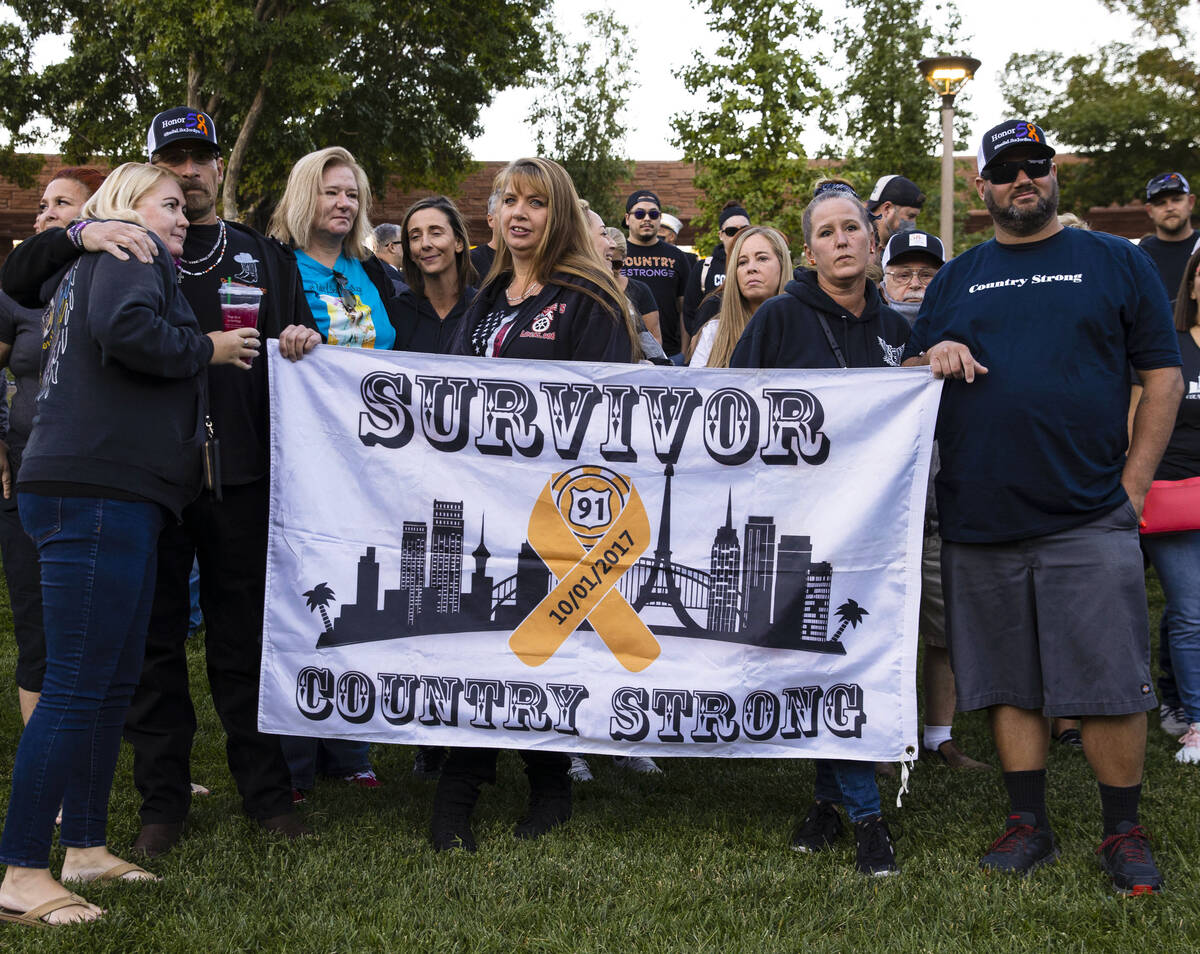 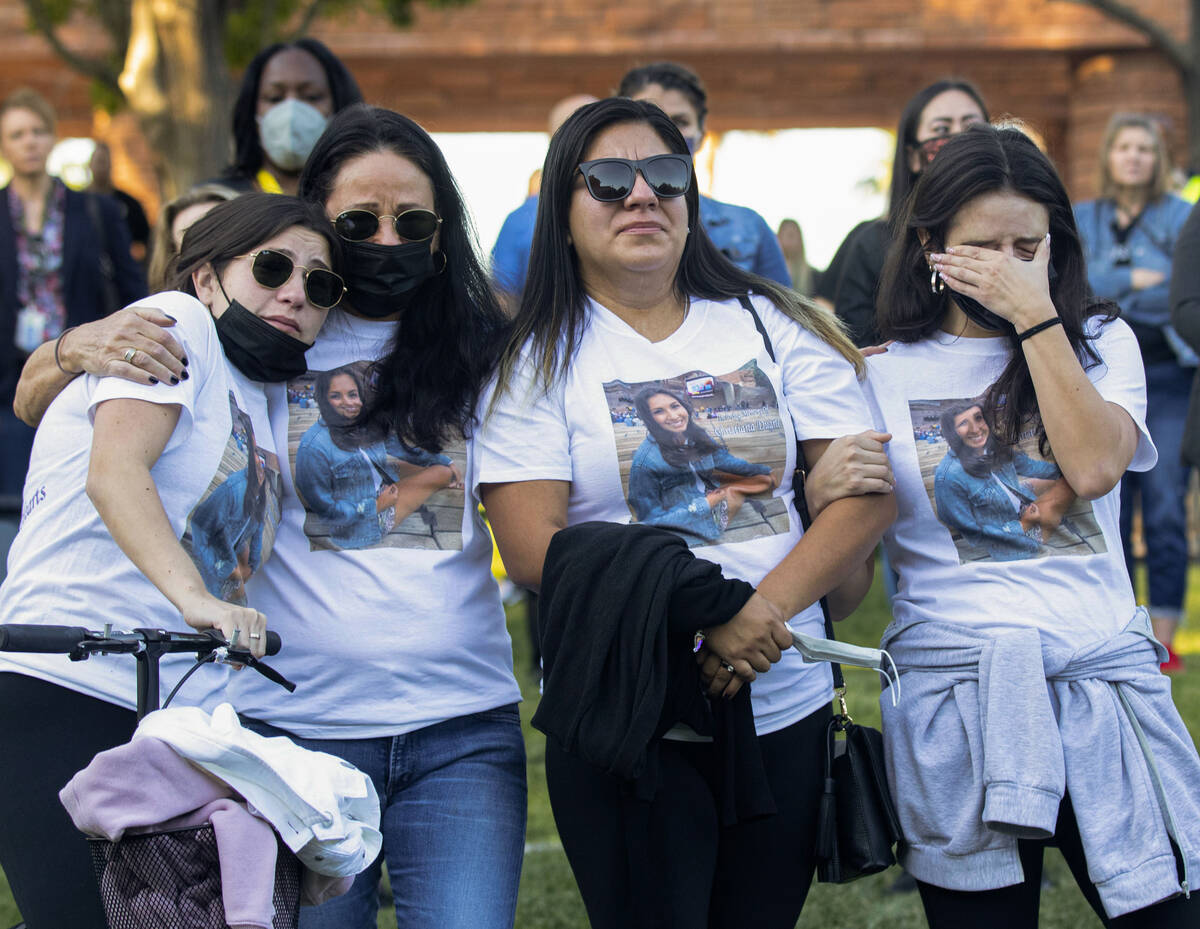 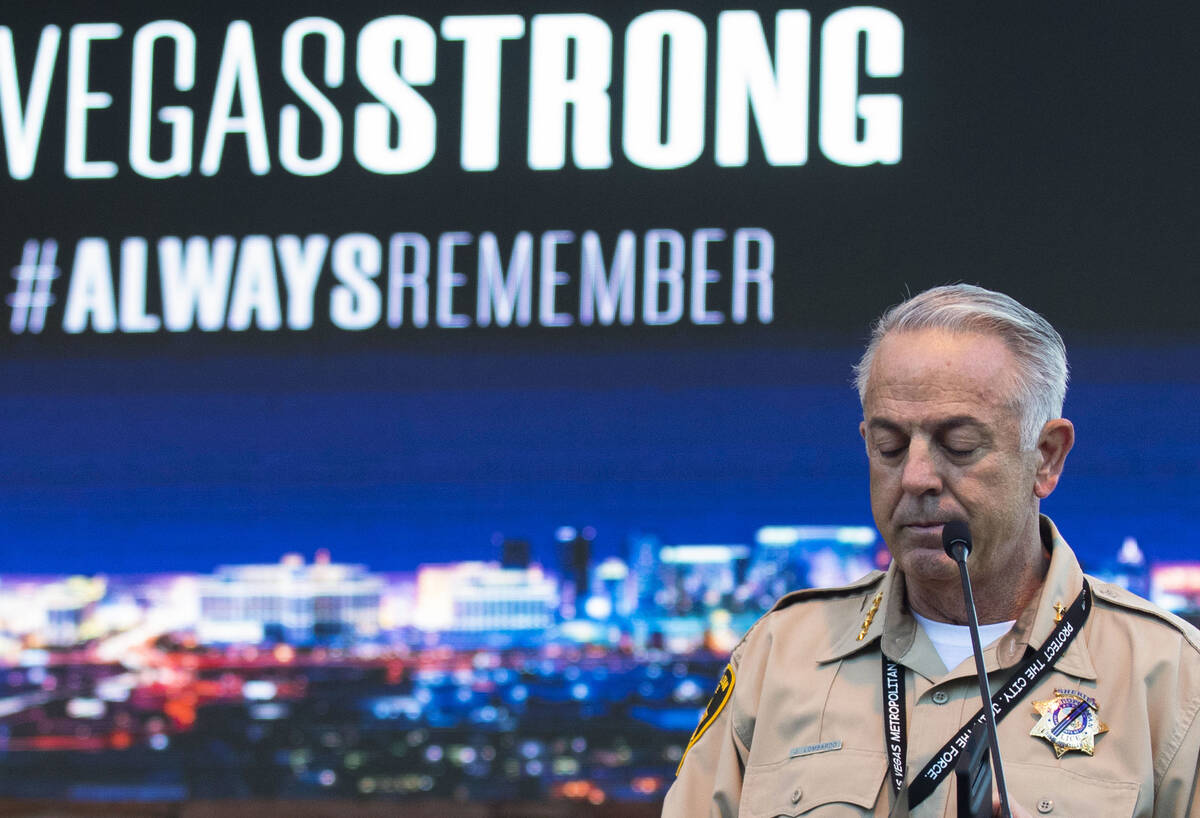 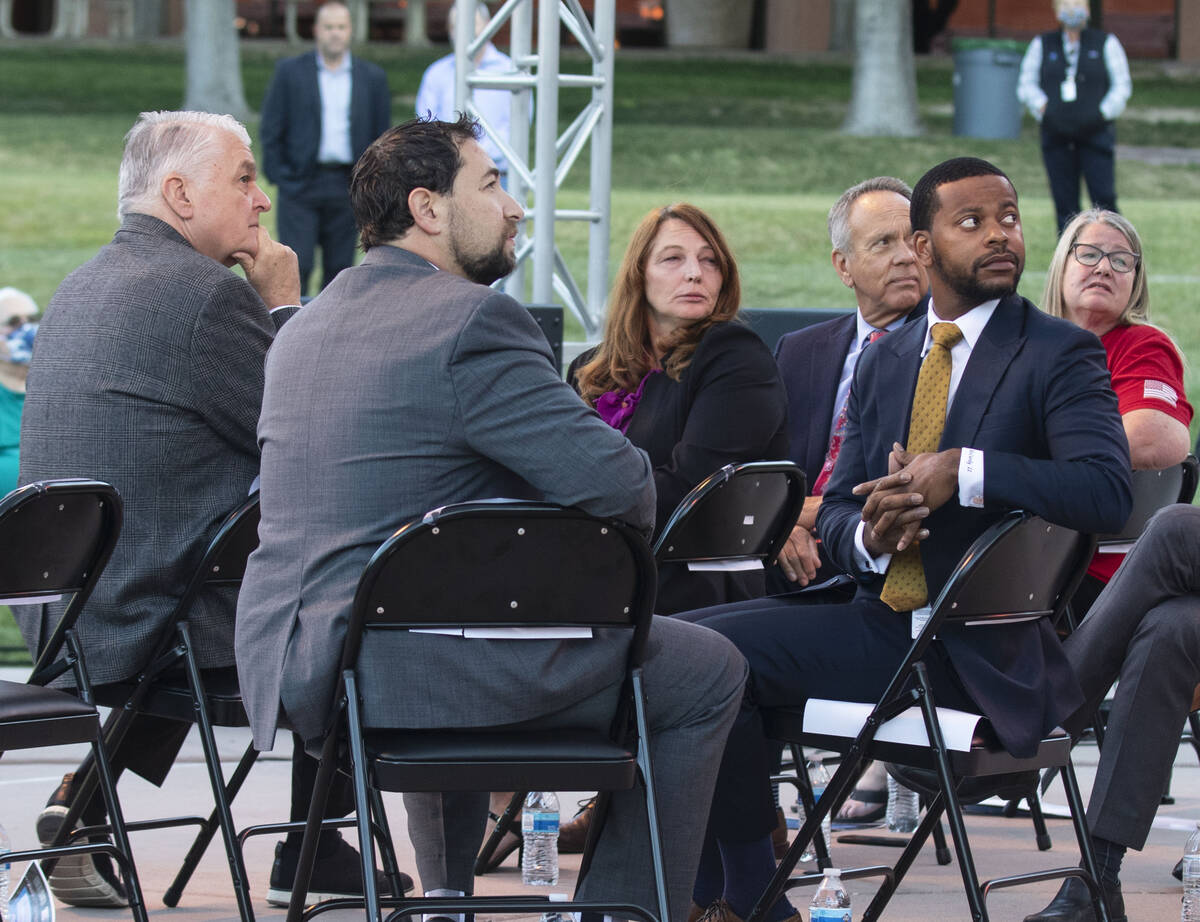 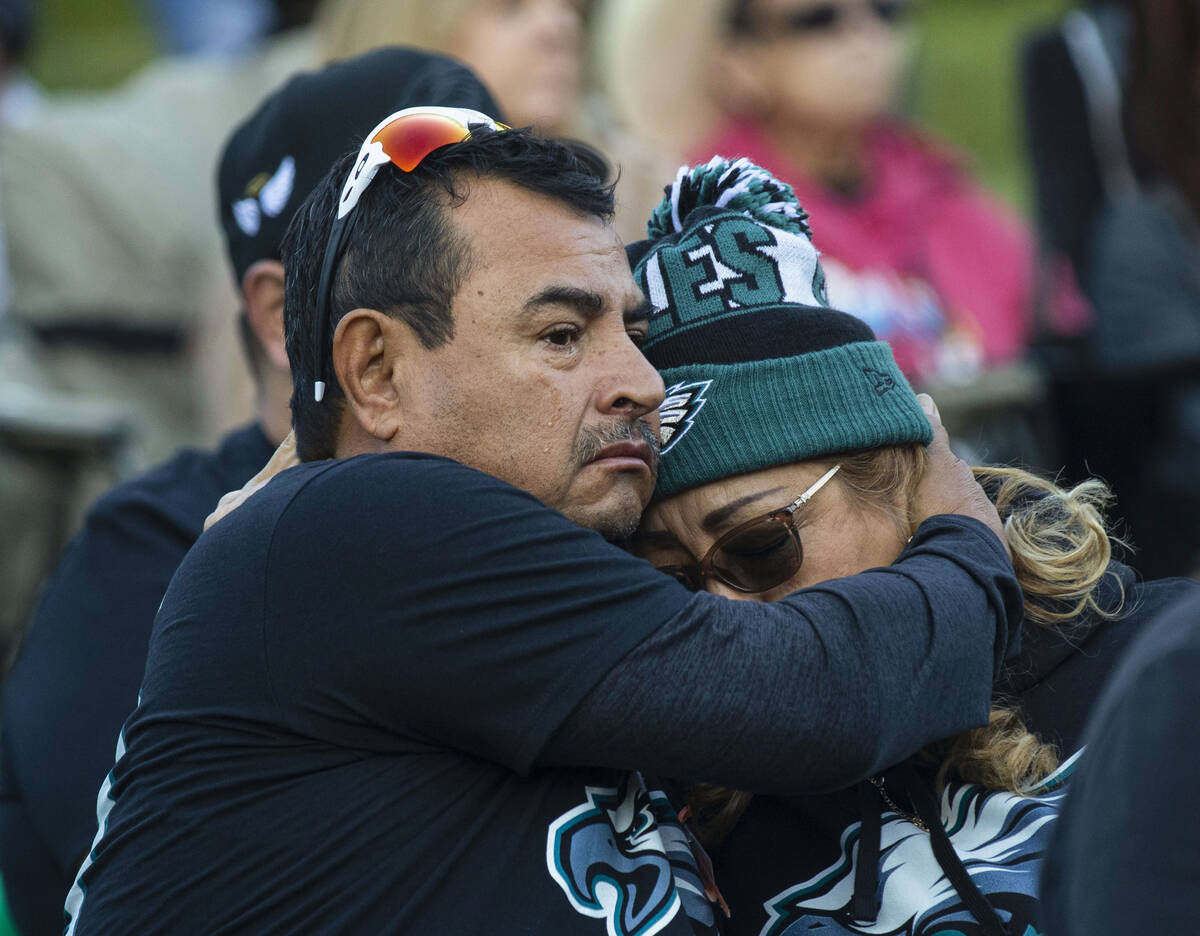 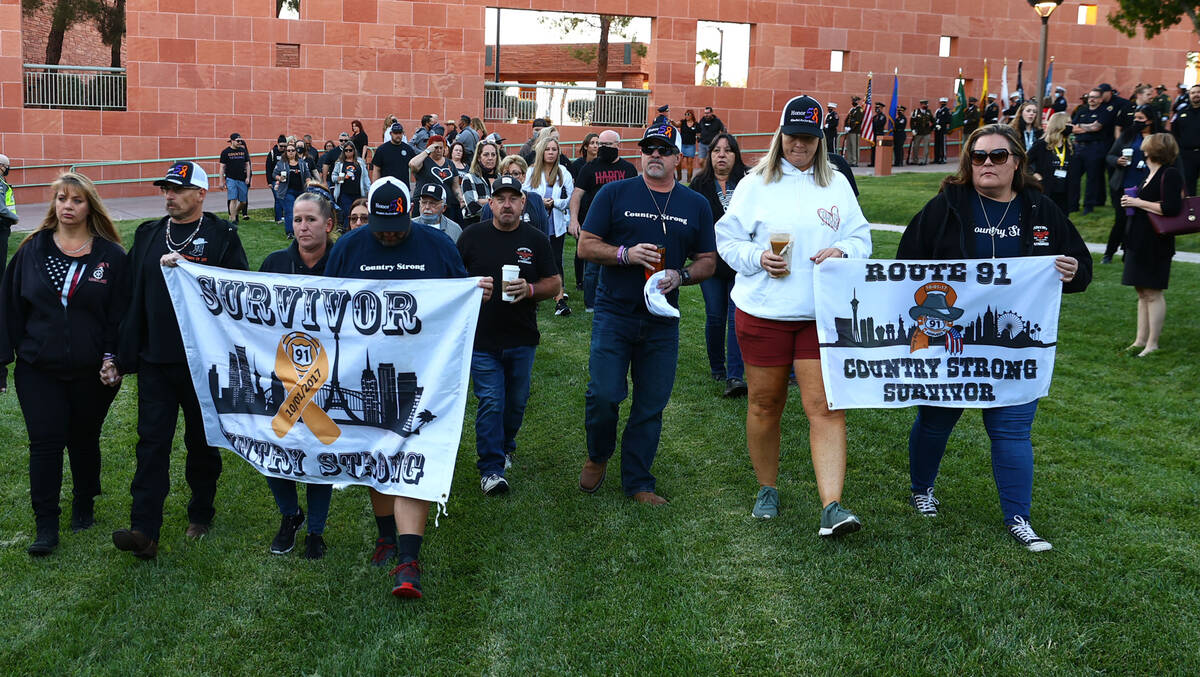 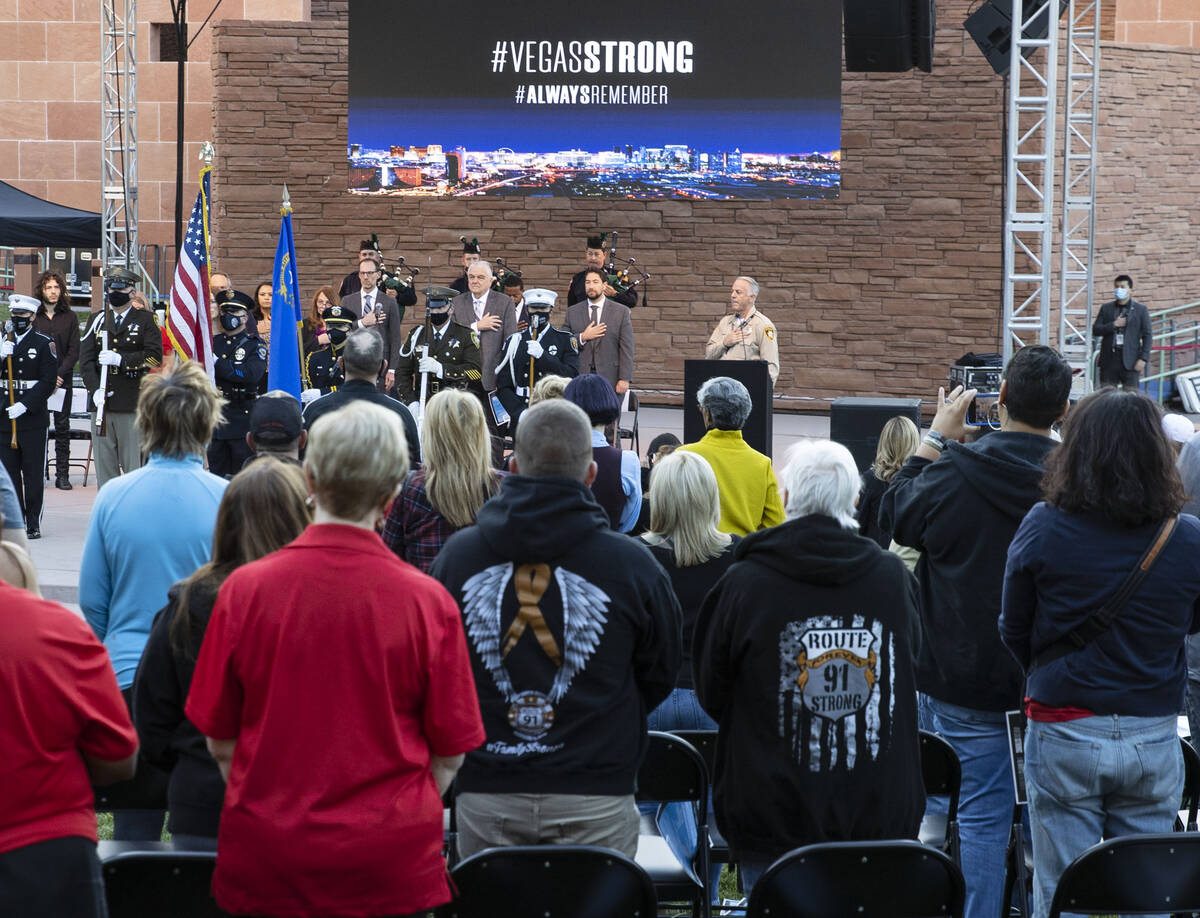 California resident Robert Ramirez came to Las Vegas on Friday to pay tribute to the life of his little sister, Melissa Ramirez, four years to the day after she was slain at the Route 91 Harvest festival shooting on Oct. 1, 2017, in the worst mass shooting in modern U.S. history.

Ramirez and his family gathered with more than 200 others in the amphitheater of the Clark County Government Center just after sunrise to participate in the annual 1 October Remembrance Ceremony honoring those killed in the massacre.

“We are here mostly to remember and make sure people don’t forget what happened,” Ramirez said. “Since it (the shooting) was here in Nevada, people in California have kind of forgotten what has happened. It is a lot different here. (The ceremony) means a lot for me, and especially for my parents.”

The commitment by Las Vegas to remember the 60 shooting victims and survivors was at the heart of Friday’s observance. Tears were shed. Families of those lost greeted and hugged one another. A shared sense of grief pulsed through the crowd even though four years have passed since a gunman, firing from a hotel room at Mandalay Bay, killed 58 attended a country music concert. Two survivors later died from injuries suffered in the shooting. Hundreds others were injured.

Jimmy Long of Riverside, California, was at the festival with a group of six that night and survived.

“We have since become close with a number of people who lost somebody,” Long said following Friday’s ceremony. “It means everything. We will come here for the rest of our lives on this day to remember the ones who didn’t make it home that night.”

As with many survivors, Long said he continues to struggle with the mental trauma of living when so many others died.

Survivor Janet Muzio Medina and her husband, Randy, also of California, shared similar sentiments. Janet said the remembrance ceremony is critical to coping with the trauma because it gives her a chance to honor those killed.

“I have to be here to celebrate (the lives) of everybody who isn’t here,” she said.

Heather Gooze, of Las Vegas, who was tending bar at the festival that night, also attended to offer support to the families of those killed.

“It is important that they see my face, that they know that we haven’t forgotten their angels,” Gooze said.

Clark County and the Metropolitan Police Department co-hosted the event with the Clark County Fire Department and the Vegas Strong Resiliency Center. Gov. Steve Sisolak told the crowd the grieving of the families “doesn’t get any easier.”

“Unfortunately, this tragedy will live on in our lives and in our memories forever,” Sisolak said. “The lives that were lost, and the families and the people affected will never be forgotten. … You are constantly in our hearts and in our prayers.”

Clark County Sheriff Joe Lombardo said the ceremony must be held every year to honor the victims and to also remember how Las Vegans came together to support one another after the shooting.

“We are only as strong as our ability to come together,” said Lombardo.

Dee Ann Hyatt spoke Friday morning about losing her brother, Kurt Von Tillow, in the shooting. She and her daughter were both wounded at the concert.

“Those physical wounds have healed, but the lasting scars for our family remain and go on, like (for) all of our families, and all of our angels’ families,” Hyatt said.

The sunrise ceremony was one of several activities being held this year to honor victims and survivors. The names of the victims will be read Friday at 10:05 p.m. at the Las Vegas Community Healing Garden, at 1015 S. Casino Center Blvd. in downtown Las Vegas.

While Las Vegas police were participating in the remembrances, they also used the anniversary to spotlight efforts to improve readiness.

Metro and the Las Vegas Metropolitan Police Department Foundation on Friday unveiled the first building constructed at the Reality Based Training Center at 7370 E. Carey Road. The center is expected to simulate realistic scenarios for first responders, including elevated threat scenarios.