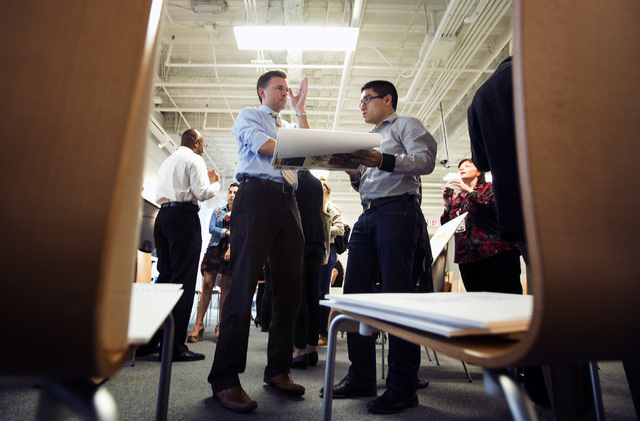 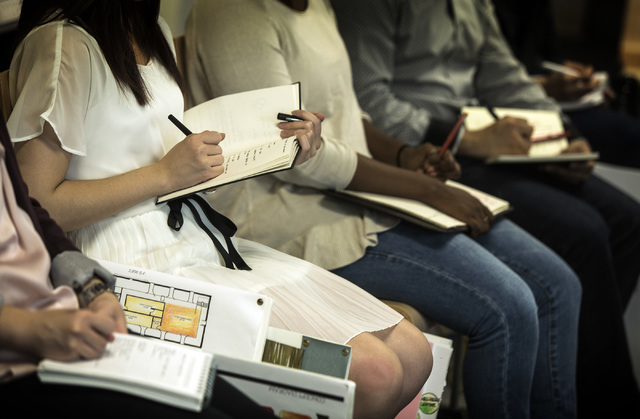 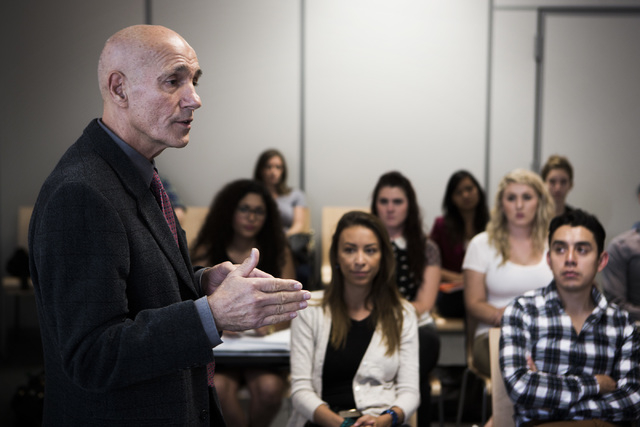 Imagine living in your home as a senior citizen.

Are there stairs? Is there enough lighting? What about grab bars in the bathroom?

Now imagine you have a neurological degenerative disease, such as Parkinson’s or Alzheimer’s.

Could you live in your home?

Questions like these have driven the growing relationship between University of Nevada, Las Vegas interior design students and medical experts at the Cleveland Clinic Lou Ruvo Center for Brain Health.

Earlier this week, inside the downtown medical building known for its innovative look, more than 30 of UNLV’s interior health design students quizzed doctors and providers at the Frank Gehry-designed medical center as part of an ongoing interactive educational collaboration.

Under professor of interior architecture Attila Lawrence’s tutelage, the students must create studio designs that could be used in real life by patients and their families.

The assignment: Remodel the interior of a New Orleans convent and make it livable for people with diminished physical and mental capacity.

While the designs are for class — the students have traveled to Louisiana to view the convent in person — the inter­action between doctors and students could have real life impacts, said Dr. Dylan Wint, a neurologist at the medical center.

“We meet with patients once every 3 to 6 months for about 30 minutes,” said Wint, explaining the importance of teaching people in the community about neurological disorders. “The more the world understands about our patients the better their lives will be.”

During Wednesday’s three-hour inter­action, the students — who take four studio classes, which include designing residential, health care, hospitality and commercial space — asked about the effects different textures may have on a patient with a disproportionate sense of euphoria.

And what about plush carpets for someone with Parkinson’s disease, a nervous system disorder often characterized with uncontrollable tremors, a student asked.

Turns out, a hard surface would be better for patients concerned with losing their balance and falling, physical therapy doctor Jennifer Nash said.

And lighting is monumentally important for people with neurological dis­orders.

One in three people over 65 will die with some level of dementia, and falling is a critical concern. That is more likely to happen in the dark, which prompts some elderly patients to leave the lights on all night, Nash said.

Nash added that grab bars should be a part of any residence for folks with a neurological disorder. She said there is a “market for aesthetically pleasing” grab bar designs. Most are of the stainless steel variety.

The forum included ideas on how to use technology such as iPads to allow communication.

Wint was impressed with a student’s suggestion for individualized lighting that goes on or off as a person enters or leaves a room.

And for those with Alzheimer’s, support memory by utilizing space with pictures or to-do lists.

This was the second of three student meetings with the doctors.

Lawrence praised the doctors for inter­acting with the students, affording them an opportunity to do something “that no one else is doing.”

Wint said offering their resources to the community has always been a part of the medical center’s mission.

“We have a world class MRI scanner and a cool building, but the most important aspect of the clinic are the experts,” the physician said.