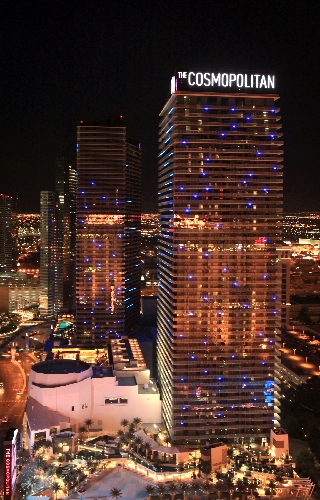 From an Elvis impersonator officiating the ceremony to having a drive-thru wedding with several of your closest friends in a stretch Hummer limo, Las Vegas is home to a number of one-of-a-kind wedding chapels.

The city will soon be home to one more unique chapel. A new pop-up wedding chapel scheduled to open at The Cosmopolitan of Las Vegas will be the first of its kind to offer a view of the Strip.

Based on the Las Vegas Convention and Visitors Authority 2010 Visitor Profile Study, approximately 1.1 million people came to Las Vegas to attend a wedding, their own or someone else’s.

Those visitors generated a nongaming economic impact of $722 million, the authority said.

Starting Dec. 28, couples tying the knot can do so with views of the Eiffel Tower at the Paris Las Vegas or Bellagio. But with its Strip location, the idea was to also give passers-by the chance to participate in the festivities, a Cosmopolitan spokeswoman said.

And the chapel, where ceremonies start at $80, isn’t just for traditional quickie unions. Marchese said it will offer vow renewals, commitment ceremonies, pet weddings and even “faux” weddings. That means if two people have been partying all weekend and want to try out a marriage ceremony, they can do so without the divorce if the marriage doesn’t work out.

The design of the pop-up wedding chapel will feature the “Welcome to Fabulous Las Vegas sign,” which will be a photo backdrop for wedding parties.

The packages, which cost from $80 to $195, include a 20-minute ceremony, Champagne and “eraser rings” dispensed from a gumball machine. Couples also get a silk flower bouquet, logo T-shirts and a souvenir photo taken in photo booth, which will post the pictures to Facebook and Twitter.