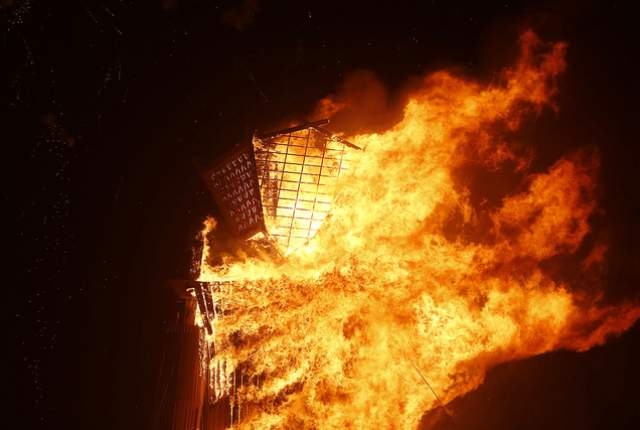 The Man burns during the Burning Man 2014 "Caravansary" arts and music festival in the Black Rock Desert of Nevada, August 30, 2014. (REUTERS/Jim Urquhart)

WASHINGTON – A month and a half before the scheduled start of this year’s desert festival, organizers of the annual Burning Man in Northern Nevada have yet to resolve more than 15 health and safety issues stemming from last year’s event, according to the Bureau of Land Management.

Officials from the BLM and the Burning Man organization were meeting Wednesday in Reno to discuss outstanding issues in advance of the Aug. 30-Sept. 7 festival in the Black Rock Desert.

The federal agency has yet to issue a permit for the event. John Ruhs, the BLM acting Nevada state director, said all conditions raised in a post-event review last year must be addressed for the BLM to allow this year’s event to proceed.

Ruhs stopped short of saying the BLM might shut down Burning Man, expressing confidence an agreement could be worked out.

“We have a long ways to go yet but I’m pretty confident we will as always be able to address issues together and get to a good place with them,” Ruhs said in an interview.

But the agency took the unusual step of making public a letter listing the outstanding health and safety issues. Of 20 compiled following the 2014 festival, the BLM said 18 remain to be resolved including improvements to its medical program, transportation management and security surrounding the festival’s signature burn events.

“Last year, a total of 2,880 patients were treated for medical issues, including 71 drug overdoses, 67 trauma incidents and 30 cases of alcohol poisoning,” Ruhs said in the letter to the government affairs director of Black Rock City, LLC, the nonprofit that runs the festival. In addition, a woman from Wyoming was killed when she fell beneath a moving bus.

The Burning Man festival spokesman was traveling on Wednesday and not immediately available for comment.

The BLM letter shed light on the nuts and bolts behind the event in which 60,000 to 70,000 people congregate at the art and counterculture festival in the remote playa.

The BLM making potentially embarrassing public health and safety issues with Burning Man is the latest twist in the relationship between the agency and the festival that this year has been anything but routine in the history of the event that dates to the early 1990s in Nevada.

The bureau came under withering criticism earlier this month after it proposed Burning Man pay for a separate compound for federal working staff with amenities such as refrigerators, washing machines, vanity mirrors, flush toilets and food choices including ice cream and steak.

The agency is reworking a proposed memorandum of understanding for the event after pressure from Sen. Harry Reid, D-Nev., and other federal lawmakers. BLM Director Neil Kornze is a former Reid aide.

BLM officials on Wednesday denied they were in a tit-for-tat with Burning Man. The agency’s letter though makes a connection.

The BLM in the letter acknowledged Burning Man concerns with the agency’s proposals for food and facilities.

“We are now taking a top to bottom look at exactly what is needed,” Ruhs said, adding “While the BLM revises its statement of work, dialogue must also continue on a wide array of health, safety and environmental concerns raised by the BLM earlier this year.”