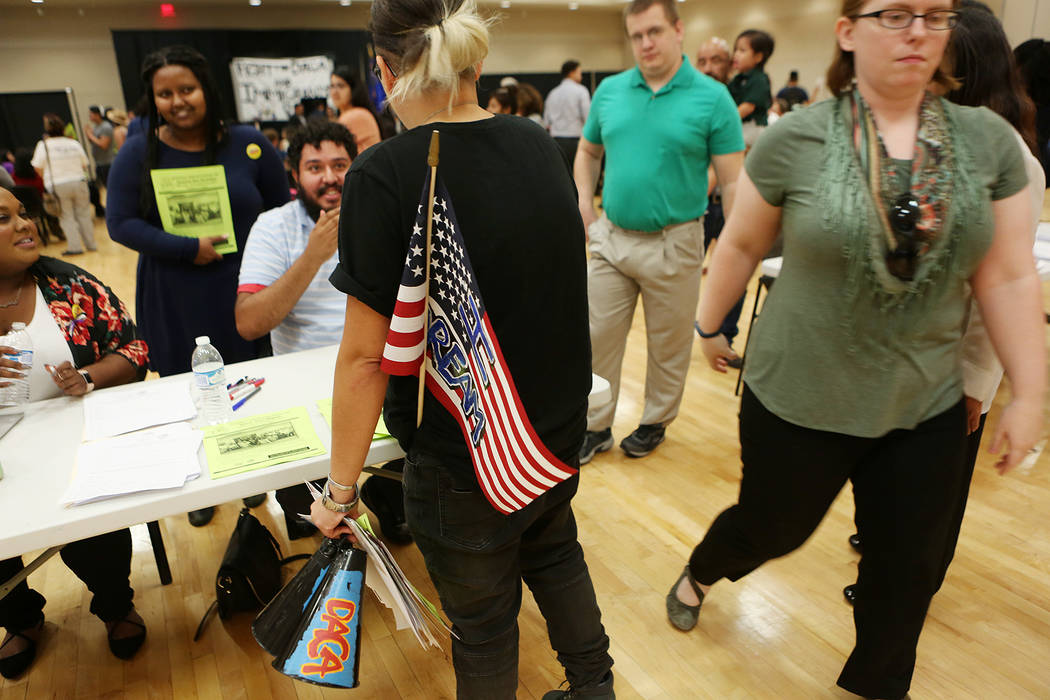 Legal aid groups that ramped up to help Nevada’s DACA participants renew work permits as the deadline to do so approaches say demand for the assistance has been much lower than anticipated.

It’s estimated that up to 3,000 of Nevada’s 13,000 Deferred Action for Childhood Arrivals program participants are eligible to renew their work permits for two more years because their work authorizations will expire before March 5. They are required to act by Oct. 5 or will lose their DACA status as soon as it expires.

“We were expecting a lot more,” said Martha Menendez, an immigration attorney for the Las Vegas office of the City of New York’s Citizenship Now program. She has two legal aides trained to fill out DACA forms and assist with renewal services through Sept. 29, but as of Friday, only seven people had asked the office for help.

Michael Kagan, director of the UNLV Immigration Clinic, said the 66 volunteers there had processed 24 renewals and had more 18 scheduled.

The reasons behind the low turnout are not clear.

It’s possible some of the young undocumented immigrants brought to the United States as children are scared to provide their personal information to the Trump administration, which announced the six-month phaseout of DACA on Sept. 5, the groups say. They point out, though, that the federal government would already have their information on file from their initial applications.

It’s also possible they are balking because of the $495 application fee to U.S. Citizenship and Immigration Services to renew their DACA status. Lawyers can waive their fees for legal assistance, but the application fee stands.

The Citizenship Now office and UNLV clinic also have fielded calls from DACA participants who aren’t eligible to reapply for renewal, though Kagan said his staff has received only a few such inquiries.

People also could be applying without legal aid or just be procrastinating, Kagan said.

“All of these (reasons) are probably true for someone,” he said. “When we see lower demand than expected, it’s very hard for us to get firm information about what’s going on.”

Laura Martin, communications director for the Progressive Leadership Alliance of Nevada, which advocates for social and environmental issues, said her organization and partners like the ACLU of Nevada and Mi Familia Vota have been advertising on radio, television and social media and distributing flyers to raise awareness of the free legal aid to DACA participants.

Despite that, around a dozen people attended a DACA information session at UNLV on Saturday, she said.

“I’m just not sure how many other different ways we could get the word out there,” Martin said.

She contrasted the recent response with the surge of interest after DACA was enacted through an Obama administration executive order in 2012. At the time, she recalled, undocumented young adults interested in getting involved swarmed the PLAN office off West Sahara Avenue near South Rancho Drive.

The groups said DACA participants will face consequences if they simply let their legal status expire.

“They’ll go back to being what their status was before: undocumented,” Menendez said. Work permits will expire on or before March 5 if they aren’t renewed for two years. Driver’s licenses will slowly expire, too.

The Social Security numbers given to DACA participants are for life, but Menendez said she wasn’t aware of any government benefits that could be obtained using one.

“It’s just an identifier,” she said. “They’ll be able to use it to pay their taxes.”

Kagan said he expects demand to grow as the Oct. 5 application deadline approaches. He urges eligible participants to apply by Oct. 2 to ensure their paperwork reaches immigration authorities in time.