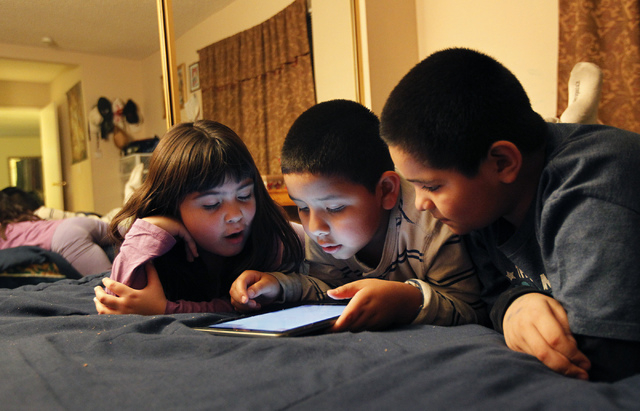 From left, friends Annakaren Villalobos, Anthony Ruiz, and Omar Calderon play a video game together in Ruiz's parent's room at his home in Las Vegas on Thursday, Feb. 27, 2014. All three children suffer from autism, and Ruiz has been on a waiting list for a year to receive treatment from the state's Autism Treatment Assistance Program. (Jason Bean/Las Vegas Review-Journal)

Julia Aguirre feels a sense of relief now that state officials are paying attention to a plea from her and other mothers of autistic children awaiting desperately needed services.

“It’s a great advantage that at least they are listening to us,” Aguirre said in Spanish on Friday. She has a 6-year-old autistic son, Anthony Ruiz.

“Before, they wouldn’t even listen to us. They didn’t even know of the necessity that existed,” she said.

The Legislative Committee on Health Care recently heard testimony on the great need that exists for more funding to support autism treatment and the need to expand the workforce of professionals who work with autistic children.

According to a presentation made for the committee, there are 546 children on the waiting list to receive services from the state’s Autism Treatment Assistance Program, which offers therapy to improve communication and behavior.

The wait list backlog began when the program started in 2009, state officials said in March. The program gets referrals from multiple sources, including families, schools and health care providers.

At the end of January, the state program was serving 199 children, from those younger than a year up to 19. The state-funded program is closing an average of two cases per month and receives an average of 16 new referrals.

The committee will now look at two possible solutions to help decrease the number of children waiting to receive treatment.

It will look at whether the state’s Medicaid plan can cover the applied behavior analysis, which is one of the most effective treatments for autistic children, said Jan Crandy, chair of the Nevada Commission on Autism Disorders, who provided testimony.

If Medicaid covered the treatment, it would be matched with federal funding, Crandy said. The federal government would cover 60 percent of the costs and the state would pick up the other 40 percent.

Today, the state pays 100 percent of the costs.

“Currently, half of the children served by the state are on Medicaid,” Crandy said. “That would allow us to take more kids.”

The other issue the committee will be exploring is whether it’s possible to make changes in state statutes to allow certified behavior interventionists to work with just a national certification and not require them to also be certified by the state’s Board of Psychological Examiners, Crandy said.

“It has become a problem,” she said, adding that the double licensing requirement makes it more difficult to increase the workforce. Because not enough workers are available, autistic children with and without insurance are affected.

Behavior analysts, which supervise the certified behavior interventionists, would still be required to be licensed by the state’s Board of Psychological Examiners, she said.

Sen. Justin Jones, D-Las Vegas, chairman of the Legislative Committee on Health Care, said committee members are aware of the long waiting list and the children who have to wait up to five years to get the treatment they need.

“That’s simply unacceptable,” he said. “In terms of how do we fix the problem, I think there needs to be more resources devoted to autism.”

For the state to cover the applied behavior analysis under Medicaid, there would have to be an amendment to the plan, he said.

And Nevada is the only state that requires two certifications for the certified behavior interventionists, which is redundant, he added.

The committee will now move to bill drafting requests and work sessions, Jones said. The possible solutions will be discussed during a work session in June or July.

Still, he said those two solutions might not solve the problem. Autism needs to be more of a priority in the next legislative session.

There are 5,145 autistic children who have been identified in schools throughout Nevada, she said.

The Clark County School District is the only district that provides in-home applied behavior analysis treatment, according to Crandy’s presentation. About 100 children benefit from the service.

However, the district has indicated it will phase out the option by 2015, according to the presentation.