A license plate to show support for the right to life is shown in this proposed design. The plate is not yet available, and could draw legal challenges. Courtesy, Women‘s Resource Medical Centers of Southern Nevada, Inc. 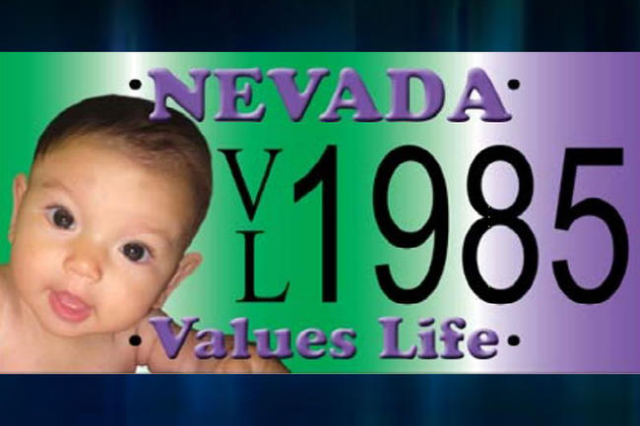 CARSON CITY — Nevada residents may soon be able to proclaim their support for the right to life for unborn children by requesting a special license plate from the Department of Motor Vehicles.

The Nevada “Values Life” vanity license plate was approved last month by a panel of lawmakers serving as the Commission on Special License Plates. The vote was 3-1 to approve the plate with the lone Democrat, Assemblyman Richard Carrillo, opposed.

The plate could be subject to litigation, however, from Planned Parenthood, the panel was told by its legal counsel.

The plate is being sought by the Women’s Resource Medical Centers of Southern Nevada, which CEO Esther Caruso-Golleher said has spent the past 30 years in its mission to save the lives of unborn children by sharing the love of Jesus Christ.

Some of the proceeds of the special plate would go to support the group’s work.

Caruso-Golleher told the commission that the organization believes that a majority of women seeking an abortion do so for social or economic reasons. The organization, which is a charity and not a political entity, provides pregnancy testing, education, prenatal care and support free of charge, she said.

“There is significant demand for these plates,” she said.

Matthew Mundy, counsel to the commission, said there are about 30 states that have similar plates but they have been subject to litigation.

“We are aware of the potential for litigation over this particular message,” he said.

If the plate is approved, Nevada would be endorsing the message, but it is not overtly religious, Mundy said.

“The bottom line, Mr. Chairman, is that this message isn’t religious per se, and I am not aware of any legal impediment to the commision adopting this plate at this time,” he said.

But Planned Parenthood has expressed concern that the plate could violate state law because of a provision that says the plates cannot promote a specific religious, faith or antireligious belief.

“Our major concern with the Women’s Resource Medical Centers of Southern Nevada (WRMCSN) application is discrimination,” she said in a statement. “Because WRMCSN is an ‘outreach ministry of Jesus Christ through his church,’ their discrimination policy does not protect clients based on their religion, so state dollars might only go to clients who profess a specific religion.”

The commission’s decision means that the Department of Motor Vehicles will move forward to work with the group to design a plate and prepare it for purchase.

DMV spokesman Kevin Malone said Tuesday there is no release date set for the plate, nor is there a design other than that proposed by the organization.

Because Planned Parenthood filed an objection to the plate, the agency is consulting with its attorneys before deciding how to proceed, he said.

Nevada has issued dozens of special license plates over the years, promoting everything from Las Vegas’ centennial to the preservation of Lake Tahoe.

The nearly 50 special Nevada plates generated just under $5 million in fiscal year 2014. Nearly $50 million has been generated from 1998 through 2015 from the plates, according to information provided to the commission.